I’ve got a taste for roguelite games right now and I also enjoy turn based games. So when Evertried dropped into the PlayStation Country inbox I gladly accepted reviewing duties. Although it has similarities to something like Into the Breach it’s very different to anything I’ve played before. 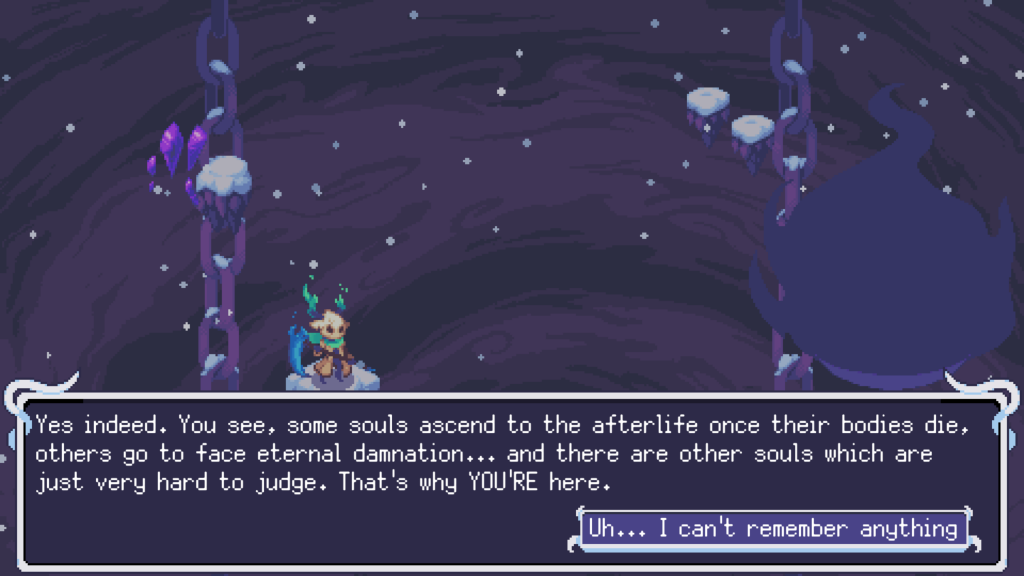 You play as a warrior who has died. To gain access to his afterlife he must fight his way up a tower and reach the top. That’s kind of it, though you meet some NPCs randomly during your ascent and they have their own tales to tell. It’s a roguelite though, the story is the least of your worries.

As mentioned in the opening paragraph this is a turn based game and the similarity to Into the Breach comes from the size and shape of the play area. You play on a 7×7 isometric grid and you can move up, down, left and right one space or can dash to move two spaces. With each move you make the enemies will then also have their turn. If you’re next to an enemy and move into them then you will attack them. If you end up next to an enemy at the end of your turn then you’ll get hit on their go. You only have three hit points so mistakes will add up quickly.

The idea is that you sync up movement with the enemies so that as you move they will then move into range and you can hit them on the next turn. Early doors most enemies have one hit point so it’ll only take one attack to clear them off the board. There are multiple enemies of different varieties who move by their own rules so keeping track of everyone is paramount to getting through alive. 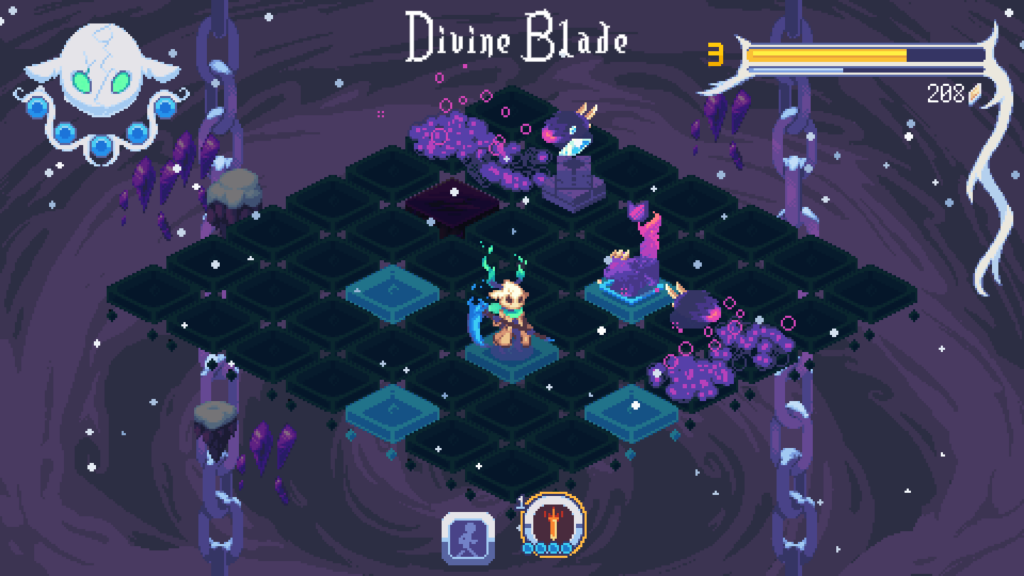 Floor tiles can have special properties like being slippery or activating a turret which you must also keep track of though enemies can fall foul to them as well and often will. Choosing which direction to move in, whether to move one square or two whilst prioritising enemies and avoiding hazards is the main meat of the game.

On the fifth floor of each set of ten you’ll enter a shop where you can spend shards you gain from defeating enemies. There are skills to buy and modifiers. Modifiers are passive whilst skills need to be activated using charges which you gain by moving without dashing. The skills can do things like let you attack from a distance or heal some damage whilst modifiers can let you gain a shield or do more damage.

The skills are actually very weak and you’ll often be better served doing the basics well but if you do find situations to use the skills then they will gain experience and eventually level up. This will carry over across playthroughs so it’s worth doing but I often found myself creating situations to use them, rather than them being useful to the situation naturally. There are even some that have a chance to kill you instantly, which is bizarre with the amount of time a run takes and I’ve been on the wrong end of luck pretty much each time I’ve experimented with them. Similarly with the modifiers there are some that are very useful, like the shield, and then there are some that just seem pointless and they don’t level up. 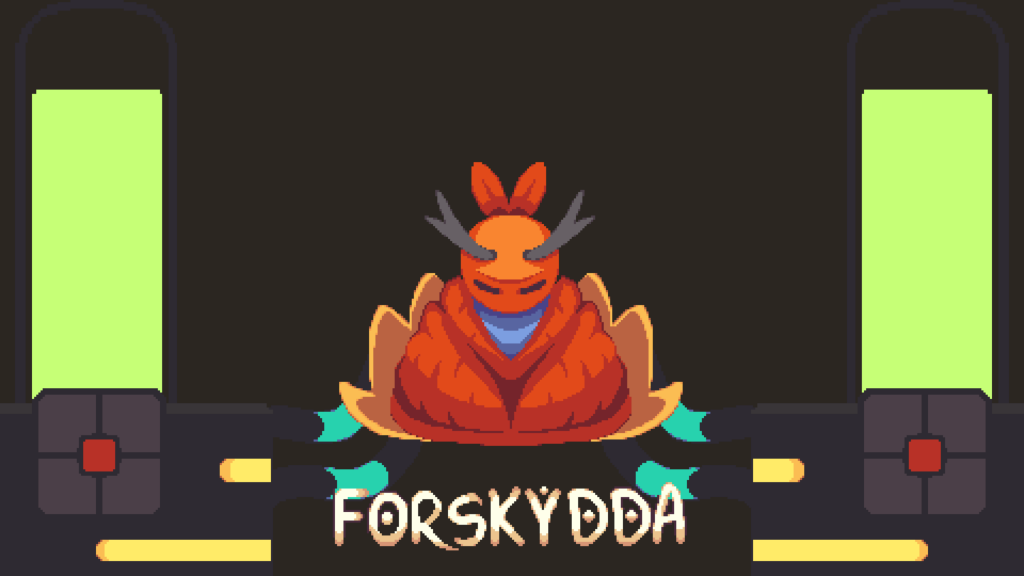 A lot actually don’t become active unless you have enough focus too. Focus is a bar that fills as you attack and defeat enemies. It will rise through levels but if you go too long without attacking or take a hit then the level will go down. It’s an odd addition for a turn based game as it drains in real time, not per move you make, so it forces you to be quick and aggressive. You gain more shards as it gets higher too so I understand it as a concept but linking the modifiers to it seems to punish new, worse players (the ones who need the help) whilst rewarding those that are probably good enough to not need them so badly. The shop also doesn’t give you this information, so you think you’re buying a cool ability and it may not even activate.

Every ten floors is a boss fight. These have their own gimmicks and patterns but are actually easier than the levels as you only have to keep track of one pretty predictable thing, rather than lots of different ones. A couple have random floor layouts that can cause issues but I would rarely take a hit on bosses which is unusual balance-wise. 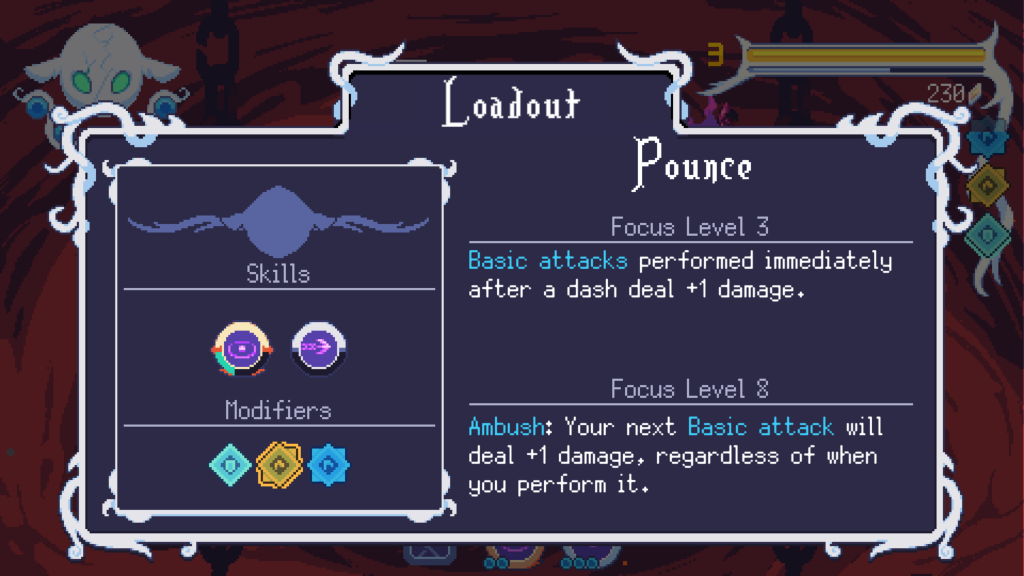 I’ve got to admit that I haven’t managed to beat Evertried yet. I’ve made it to floor 47 (twice!) of what I believe to be 50 but when things go bad I’ve found they go bad quickly and terminally. Sometimes you’ll take the odd hit through sloppy play but you can also play your way into a position which seems impossible to get out of. Maybe that’s where the skills come in and a fully levelled up skill will help clear a path when you get boxed in by enemies with two hit points, but with what I have available right now I tend to get overwhelmed with lots of enemies that require multiple hits come the latter stages.

It doesn’t help that the game has stopped responding on runs before. Not crashed, I can still open the pause menu but I believe it’s stuck on the enemy’s turn as I can’t move or open my ability menu. Unfortunately the game doesn’t save mid run so that was 40-60 minutes gone. If you exit to the main menu through pausing the game doesn’t even warn you that you’ll have to start over next time which is an oversight.

The unclear information is maybe the only place where the game falters on its presentation. The 2D sprite work is very nice and some of the tunes are great, especially the boss fights. Enemies are easily identifiable with animations showing what they’re going to do next and each set of levels has a different look to it. It has a strong style that really adds to the enjoyment. 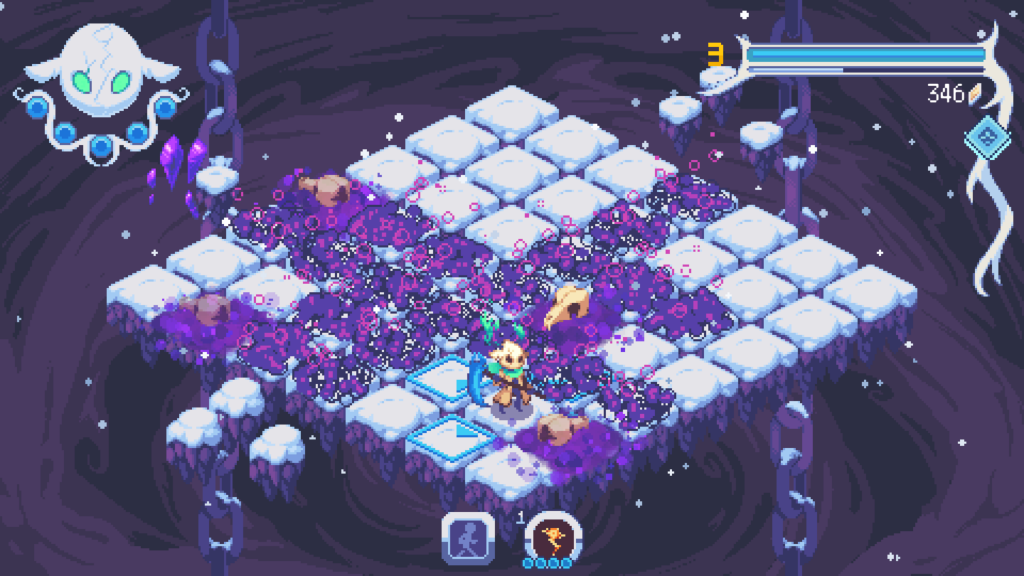 I can only do a few runs at Evertried at a time, tops. A lot of roguelite games let you start from a later level if you’ve reached it, which isn’t advised often as you get stronger on the lower levels but I would really appreciate that feature here. Once you get the hang of the gameplay the early levels are very repetitive, especially as it’s a turn based game rather than an action one. I don’t mind playing the early stages of Dead Cells, Risk of Rain or even the recent Crown Trick but as the abilities don’t make as much difference here things tend to play out the same more often than not.

There is a good game in Evertried. I’m sure a good player will be able to play through the game without skills and modifiers and not get touched due to just being able to read the board and think ten steps ahead but I feel indifferent to the majority of abilities which is what varies up the gameplay in these types of game. Play it enough and they will level up and maxed abilities can be selected at the beginning of a run, which you’d hope would make them worthwhile but that’s a lot of busy work. 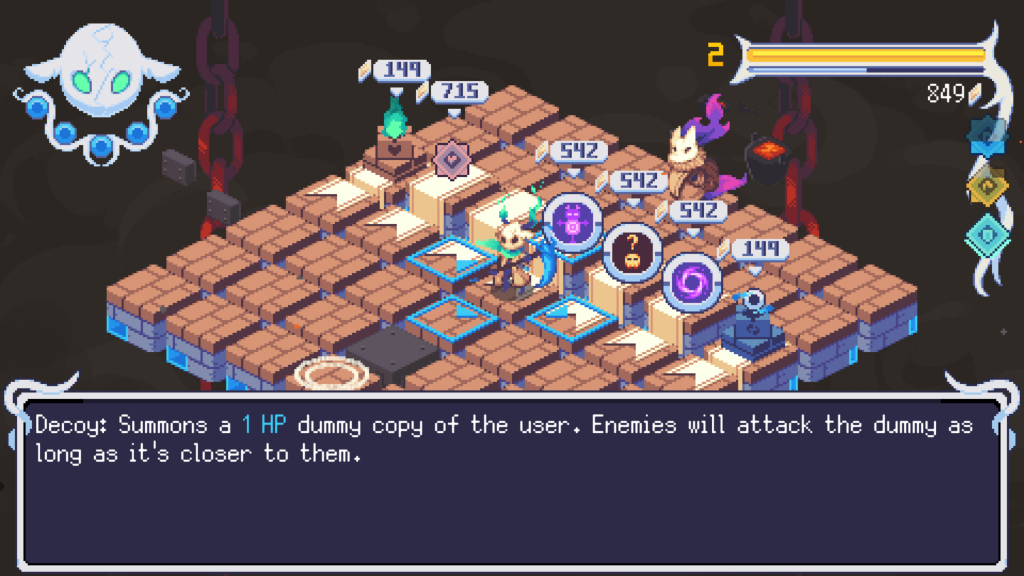 I’ll keep going back to it, I enjoy short stints on it and I think one lucky run that doesn’t crash will be all it takes for me to finish it. I know there’s a hard and endless mode to unlock after that so if you do master it there’s more for you to get through. If you’re looking for a more thoughtful roguelite, rather than the action kind then you should give Evertried a go, it’s a neat concept and a nice change of pace, in short bursts.

Evertried
7 Overall
Pros
+ Basic gameplay is challenging
+ Levelling up skills is cool
+ Strong presentation
Cons
- Can get repetitive
- Abilities start off so weak
- No mid-run save
Summary
Evertried is a challenging turn based, roguelite. The skills you can get are generally weak and levelling them up requires a lot of busy work but the basic gameplay is well realised, if a little repetitive.