You may or may not have heard of Dead Cells. Yes, it’s only just been released but it’s been in Early Access on PC for quite some time and even in its pre-release state it was making a name for itself. Yes, it’s a rogue-lite. Yes it has a pixelated art style. Yes, I’m going to be comparing the gameplay to Dark Souls. Don’t worry too much about that though, the most important point is that it is very, very good. 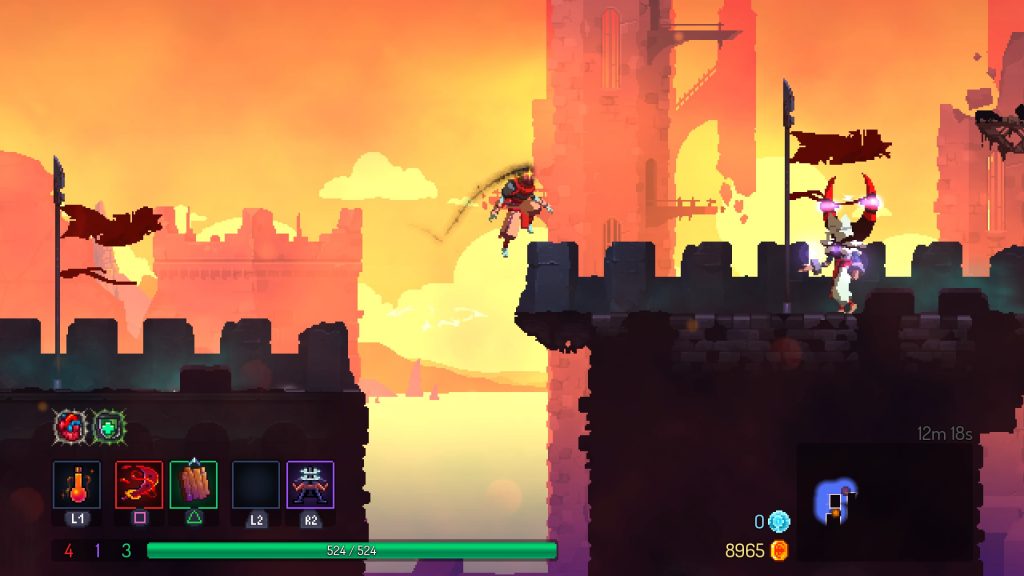 You play as…some guy. Or maybe not even that, maybe a reanimated corpse with a glowy head or something. It’s not important. You’re in a prison and you need to fight your way out. The prison doesn’t seem to be functioning very well any more and stopping your escape will be zombies and monsters, rather than prison guards. Luckily you have the abilities to defeat them, even on your first run, you just need to know how to use them.

By default you have a double jump. There aren’t too many overly complicated platforming sections but this helps you get around at speed. Whilst in the air you can slam down to get places faster and hurt enemies. Basic combat involves two attacks and a roll which has invincibility frames allowing you to avoid attacks and get behind opponents. What you attack with will depend on what you find and there are two ability slots which will also be filled with items you stumble across.

When you start you’ll get a very basic sword and shield but you’ll quickly discover more. Shields allow you to block to absorb some damage or parry with the correct timing, telegraphed by an exclamation mark over the enemy’s head, to negate all damage and turn some back on your foe. There are a large variety of swords, each handling differently. The basic sword is reasonably quick with okay range and damage, whereas a broadsword is slower but has more range and does much more damage and daggers are quicker again but short range. Beyond that you can find multiple shields, bows and arrows, throwing knives and different forms of magic. In your ability slots can go different grenades, bear traps, turrets and more. 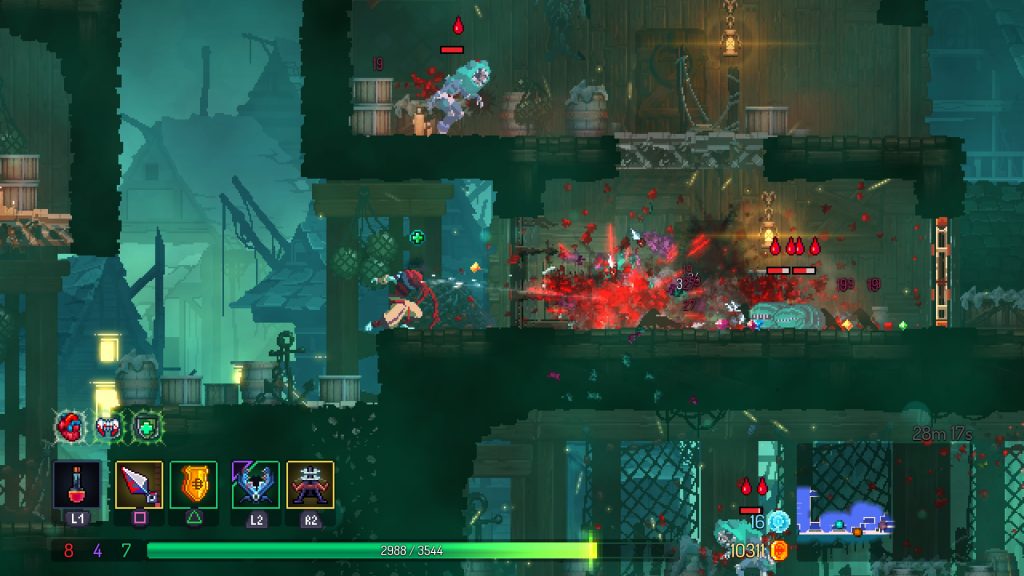 The point I’m getting at is that there is a lot of variety on offer with the weapons and equipment you can find potentially making each run, as far as your approach and technique goes, completely different. That’s before you add on the passive abilities weapons gain as you progress and find higher level weapons allowing you to create complementary combinations. A sword that makes enemies bleed combined with a turret that does 100% damage to bleeding enemies, for example.

You’ll also find character upgrades around levels which allow you to increase a stat out of Brutality, Tactics or Survival. These will grant a health boost but will also work in conjunction with equipment types to increase their potency. Considering there are four equipment slots to play with, plus an accessory slot, the combinations are quite vast and you’ll often have to make the choice of sticking with a weapon you feel comfortable with or gambling with something you’re less familiar with but has the better stats for your build. The more you take advantage of these extra stats the smoother the ride to the end will be.

Dead Cells is difficult, there’s no denying it. Enemies can hit very hard and will punish sloppy play and being a rogue-lite you only get one life before being sent back to the beginning. However, as I mentioned in the first paragraph the feel of the game is like Dark Souls. You have a set of moves which are enough to beat any enemy without taking a hit, you just have to recognise the enemy, know their attacks and use your abilities to nullify them whilst damaging them with whatever you’ve got at hand. This goes for bosses too, with trophies for defeating them without being hit definitely being possible, if not easily achieved. 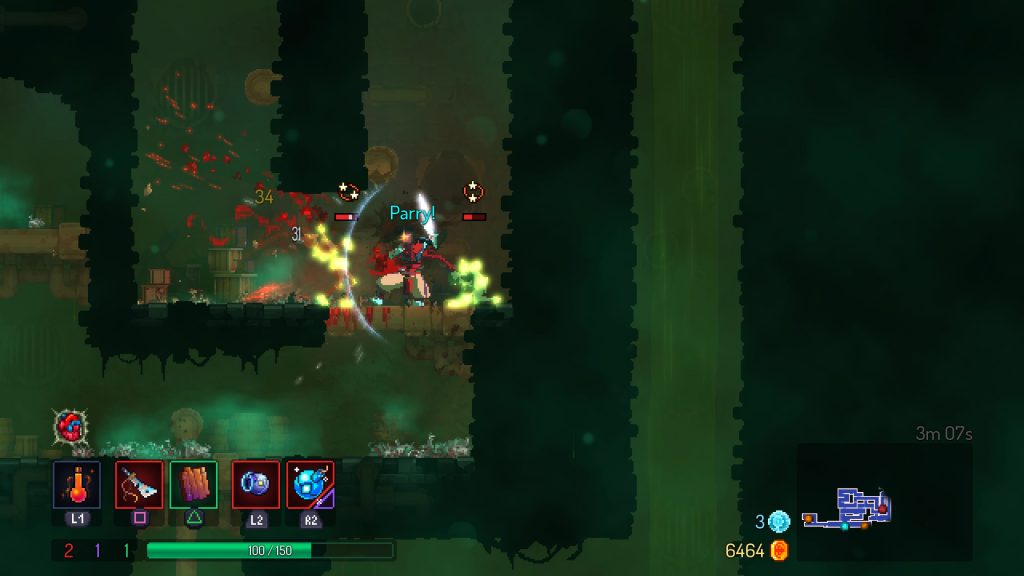 You could potentially ignore enemies as you explore the levels. They drop cash and possibly cells or even character upgrades so I wouldn’t recommend it but your character moves at a speed that most enemies struggle to deal with. Whether you want to fully explore a level is, again, up to you. There are doors that lock after a certain amount of time (you have to reach the door in level two in two minutes for example) so if you speed run your way through you’ll get some extra goodies but you may miss out on other weapons or upgrades in doing so.

The levels are procedurally generated from sections so you’ll find random upgrades, weapons, merchants, chests, cursed chests (that challenge you to defeat a certain amount of enemies without getting hit for a reward, get hit and you die instantly) and elite enemies that drop a reward but are far more powerful than the normal enemies that a running about. All linked together by teleporters allowing for easy backtracking if required. On top of that the majority of levels have little secrets to discover that’ll lead to new blueprints or other rewards and each level has multiple exits leading to different environments, allowing you to plot your way through the game.

Assuming you finish the level blueprints allow you to unlock new weapons to possibly appear in subsequent runs. There are also passive buffs and mutations which you get to select one of at the end of each level (up to three) that will give you a boost. Here you’ll spend the cells you’ve been collecting and you have to spend them before you progress. This is where the rogue-lite element comes in as any progress you make here is permanent and unlocking the huge array of items is quite addictive. 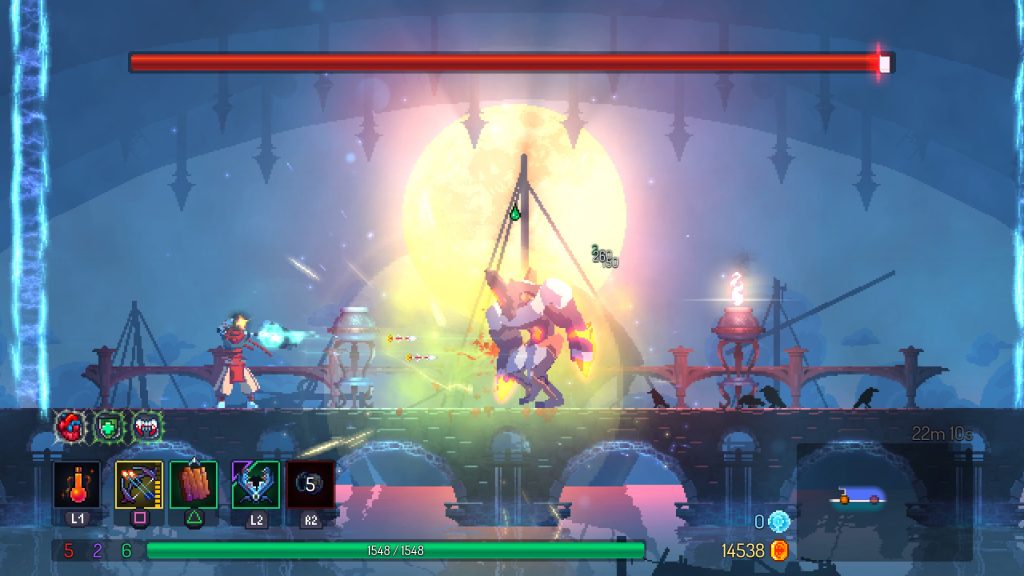 They don’t guarantee victory however and there was a brief period where I’d made my initial progress and was then struggling a little but despite being slightly disheartened I still felt the urge to push through and was even considering different tactics whilst away from the game (again, very reminiscent of Dark Souls). Sometimes they’d pay off and sometimes my best runs would come out of the blue with a set of items I’d rarely used before. I eventually managed to beat the final boss and discovered a hard mode which I dived straight into and I intend to continue doing so after this review is done. There are many more blueprints to unlock after all. There is also a Daily Challenge which is uncharacteristically lenient in that it allows you to attempt it more than once.

I’ve spent so long praising the gameplay I’ve not even mentioned the presentation that’s also very strong. The animation is superbly smooth, the locations are varied and colourful and enemy designs are easily recognisable and stand out from the backgrounds. Music is also great, being thematically relevant and catchy. It’s always uplifting in an odd way too, combined with the nonchalant main character who remarks on found letters and other interactive objects giving little hints to the story every now and then it urges you to drive on. 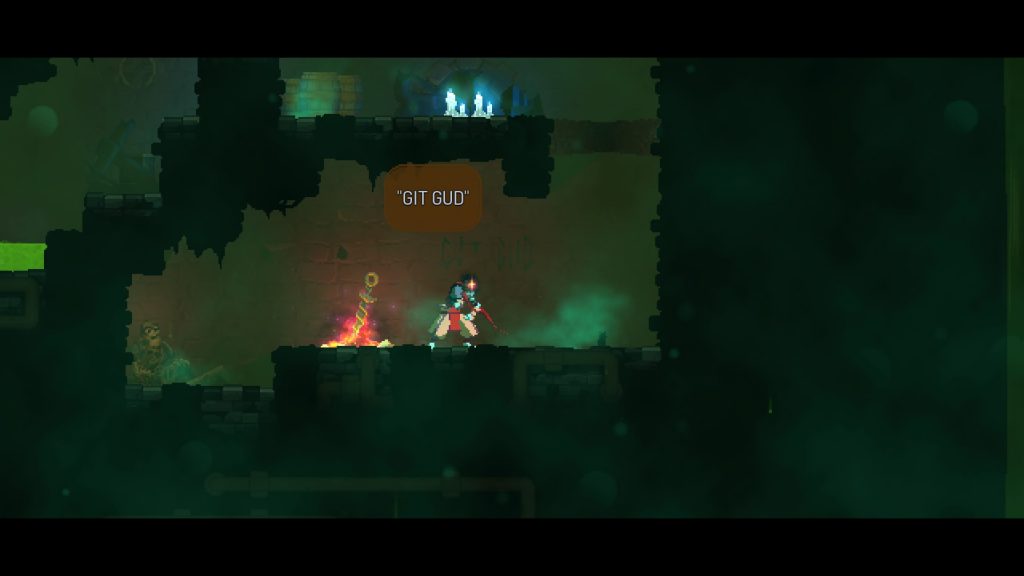 Dead Cells was obviously a strong game from the start but the time in Early Access has allowed the developers to shine the gameplay to near perfection. Character movement is fantastic, enemy variety is plentiful and the progression is rewarding. The variety in weapons means that although you may or may not take the same path through the game it’ll still feel different enough each time. You’ll curse yourself for a sloppy death and your heart rate will raise as the boss’ health bar gets lower and lower. Dead Cells is a fantastic game that’ll keep a wide range of gamers busy for a long time to come.

Dead Cells
9 Overall
Pros
+ Character movement is spot on
+ Varied equipment requires you to adapt
+ Superb presentation
+ Lots to unlock
Cons
- Maybe a slight lull after your initial progression
- Might be a little too punishing for some
Summary
Dead Cells is one of the best rogue-lites I've ever played. The combination of fantastic control, rewarding progression and superb presentation make for an experience that anybody who's not too afraid of a challenge should look into.