Rogue-likes/lites come in many different flavours, some will let arcade skills balance out the randomness if you’re good enough for example. Crown Trick on PS4 does not, you only have your own tactical nuance to help battle the RNG. if you want to make the game go faster you should try the best wifi extender for gaming use.

You play as Elle, who enters the Realm of Nightmares when she falls asleep. She quickly finds a talking crown which grants her the power to defend herself and the first set of levels acts as a tutorial of sorts. You can and probably will fail it, but this will teach the basics and give you the chance to rescue different merchants who you can purchase permanent upgrades from between runs. 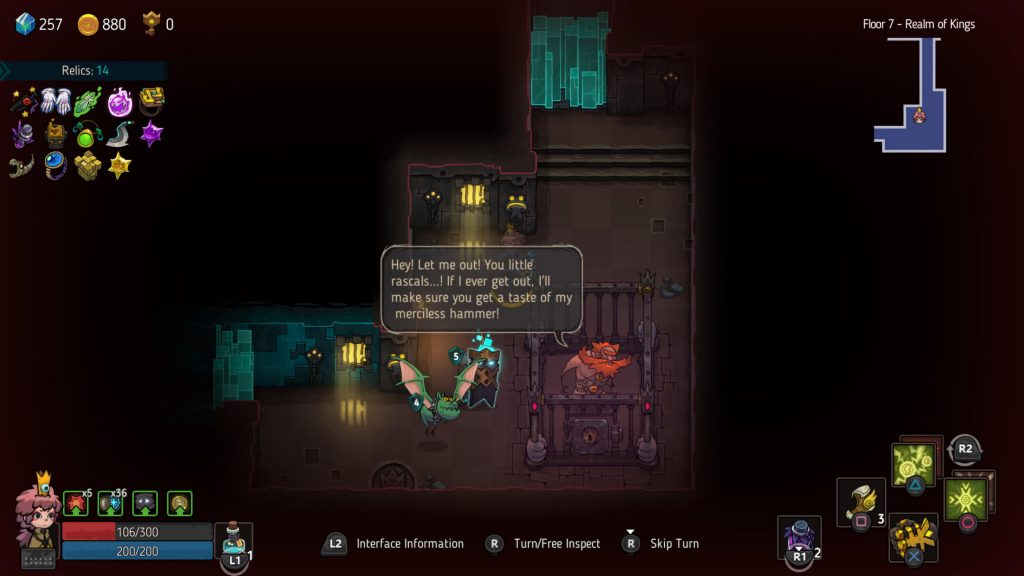 Upon starting a run there will be a selection of weapons to choose from and a choice of familiar. There are a large variety of weapons of different rarities and each type has a different attack pattern. Crown Trick is turn based once you enter a room with enemies, so you move and then your enemies move on a grid. A pair of daggers can only attack the square in front of you but attacks twice whilst a sword slashes the three squares in front of you. On top of that are spears, staves, axes, gauntlets and three different types of gun, each with different ranges and amount of shots before needing a turn to reload. The use of Elle’s Blink ability (a warp with finite uses that doesn’t use a turn) is very important for maximising attacks whilst avoiding incoming damage.

Familiars need to be defeated in order to be put into rotation and they provide spells. Each is very different, with various elemental affinities as well as attack patterns and status effects. As with the weapons, which ones show up at the start of (or during) a run is random so getting a useful one early can make life easier. As you explore you’ll find new weapons and familiars as well as relics which grant you passive buffs for that run, sometimes with a negative effect attached. Again, this is random so a good combination of these which synergise well with the weapon and familiar you’re using can be the difference between a smooth run and a failed one. 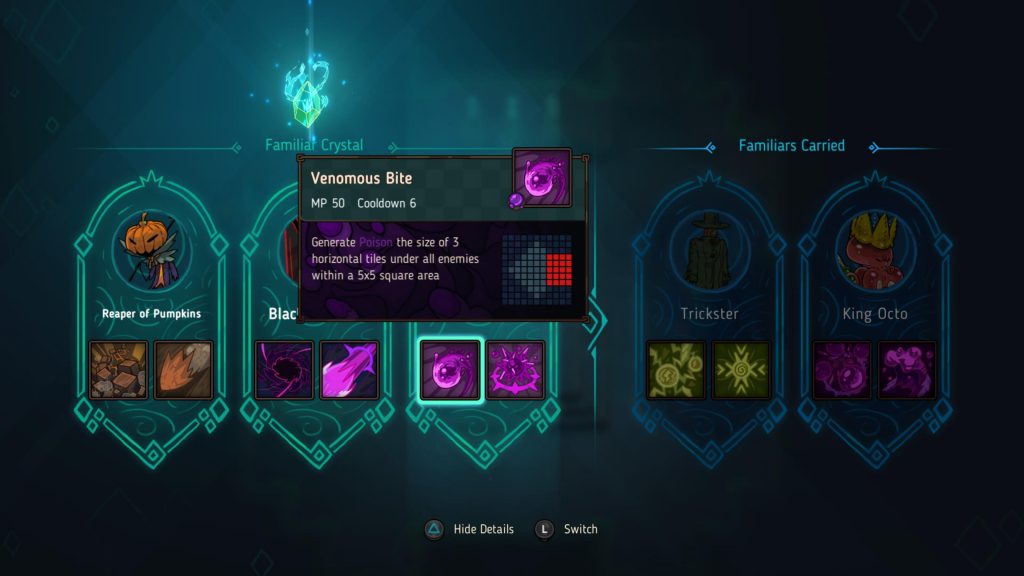 You’ll find gold as you run around and defeat enemies which can be spent in shops between levels or at random black markets and you’ll find shards which can be spent on permanent upgrades after you’ve completed a run or failed. There aren’t too many super exciting upgrades there but as you play it the minor differences these upgrades make will add up, though you have to spend the shards before you embark on a new run or lose them.

Levels are made up of multiple adjoined rooms and you can explore freely until you reach a room with enemies in at which point the door shuts behind you and you must defeat everyone using the turn based combat. Other rooms can house events, where you can choose an option to have a chance at a reward or sacrifice some health for a reward in some cases; there are challenge rooms which task you with defeating enemies in a specific way; gambling rooms; rooms with chests, either just out in the open or those that require keys and there are secret rooms hidden around for those with an eagle eye. There are even some environmental puzzles dotted around which are very easy to walk past if you’re not paying attention. 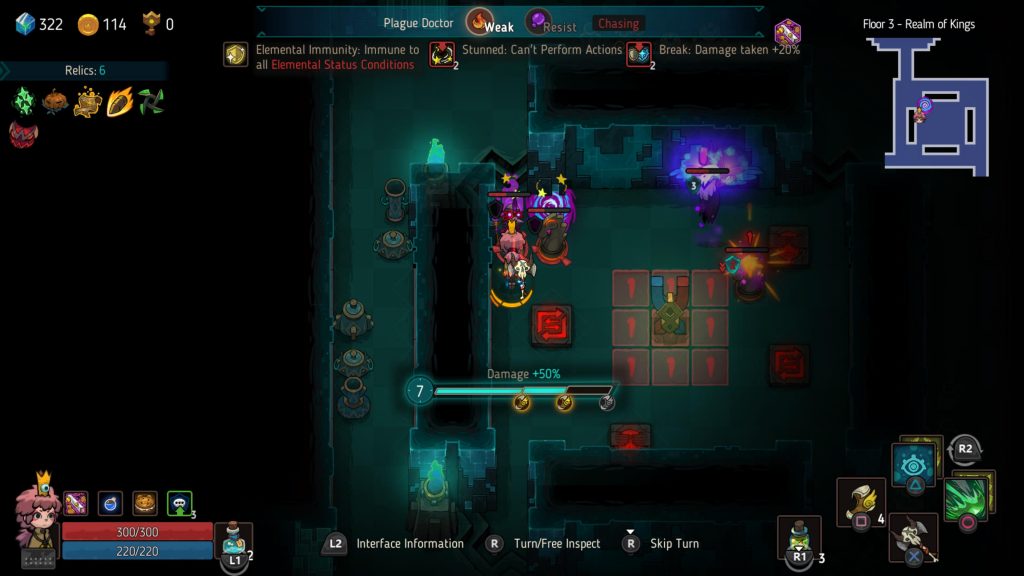 Get through the rooms, defeating the enemies, the familiars and powering up and you’ll ascend to the next level which is a boss level. Again, which boss you face is random and they have a wide range of skills and large health bars for you to deplete. Doing so will net a reward before moving onto a rest stop and then the next level which is an ordinary level again. Repeat this a few more times and you’ll have beaten that dream, but that just opens up three more to choose from, with another appearing after that.

Although initially very challenging, with a mixture of upgrades and experience you will get the hang of things and make it through the levels. Once I’d got my head around things I completed the game without much issue, beating the final level on my first try. This unlocks a harder difficulty, which I jumped into on the final level and again completed that first go. There is an element of luck, like I said, depending on what equipment you get but with a decent amount of upgrades and a bit of know-how it becomes very doable. 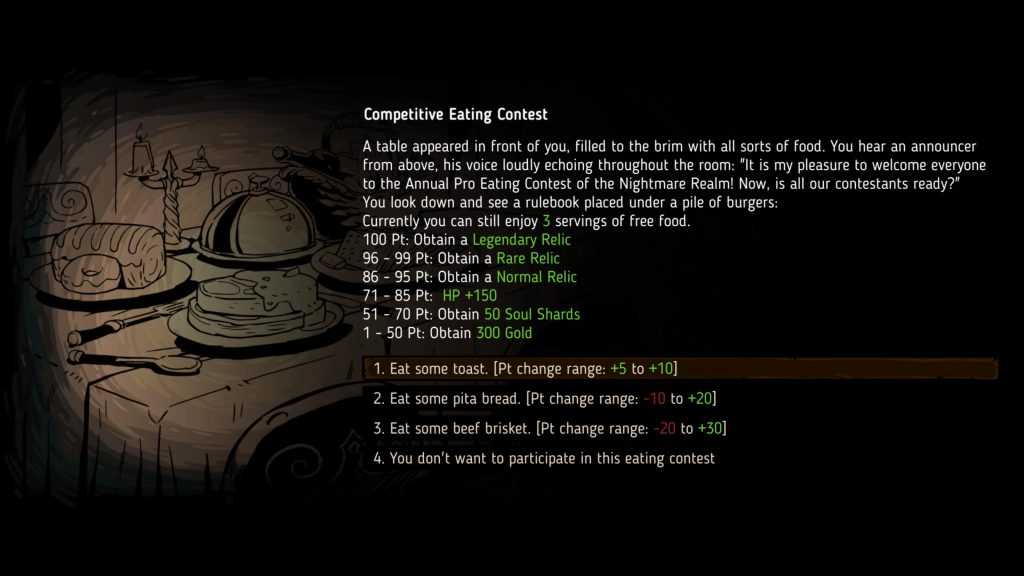 There’s also an infinite mode that unlocks upon completing the game, where the only way to finish, assuming you survive, is a move limit that increases with kills. It saves your score afterwards, and also on the harder difficulty on the normal levels, but there is no online component so you’ll just be trying to improve for the sake of improving.

The visuals are very attractive 2D sprites and there’s an excellent animated opening in the same style. The camera angle can make it difficult to see certain things, like enemy attacks, if they’re low down or behind a bigger enemy which can be a problem. Another issue I had multiple times was when confirming a blink, Elle would attack straight away on the warp which would waste a turn and if using a gun then waste a bullet. Also some of the language used for the item descriptions isn’t that clear, with the game just assuming you know what certain terms mean. 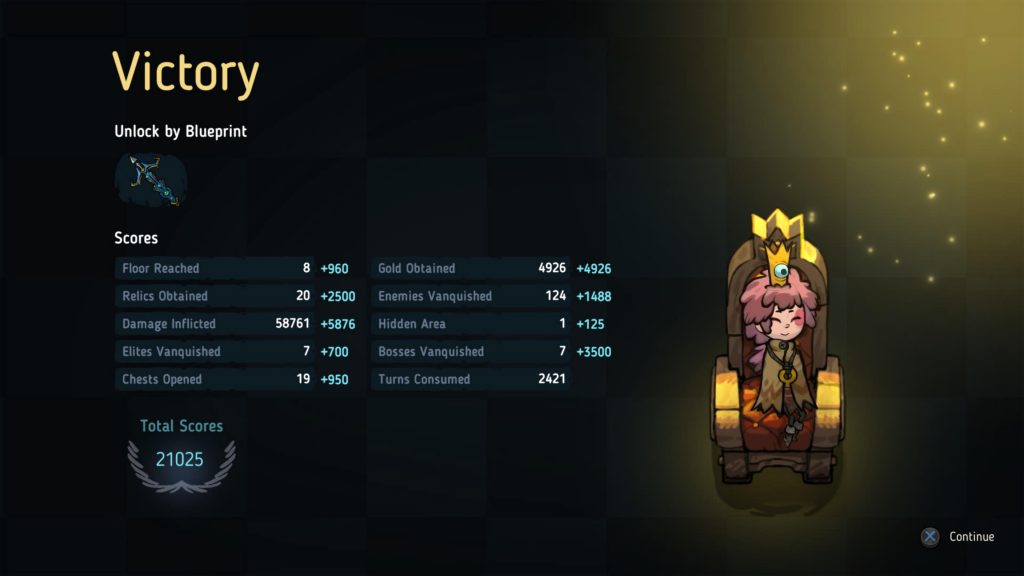 After a slow start I’ve really enjoyed my time with Crown Trick. It is reliant on luck but, slowly but surely, the upgrades do work in your favour and yet you’ll still need a decent grasp of the mechanics to get through as it should be. Being split into levels means you can have the satisfaction of a completed run in a variety of ways, with different stages housing different gimmicks which keeps things fresher than just running the same levels over and over again. There are a couple of usability issues which can irritate but nothing game breaking which means Crown Trick is being added to the ever growing list of Rogue-likes that I’ve very much enjoyed.

Crown Trick
7 Overall
Pros
+ Upgrades do make a difference
+ Rewards clever use of weapons and abilities
+ Good sprite work
+ Multiple levels and difficulties
Cons
- Very reliant on luck
- Some usability issues
- Steep learning curve
- No super exciting unlocks
Summary
Crown Trick is a Rogue-lite, turn based, grid based RPG with a heavy emphasis on luck. The permanent upgrades you can unlock along with your own experience do tip the scales in your favour the more you play and turn it from a harsh game into an enjoyable title.