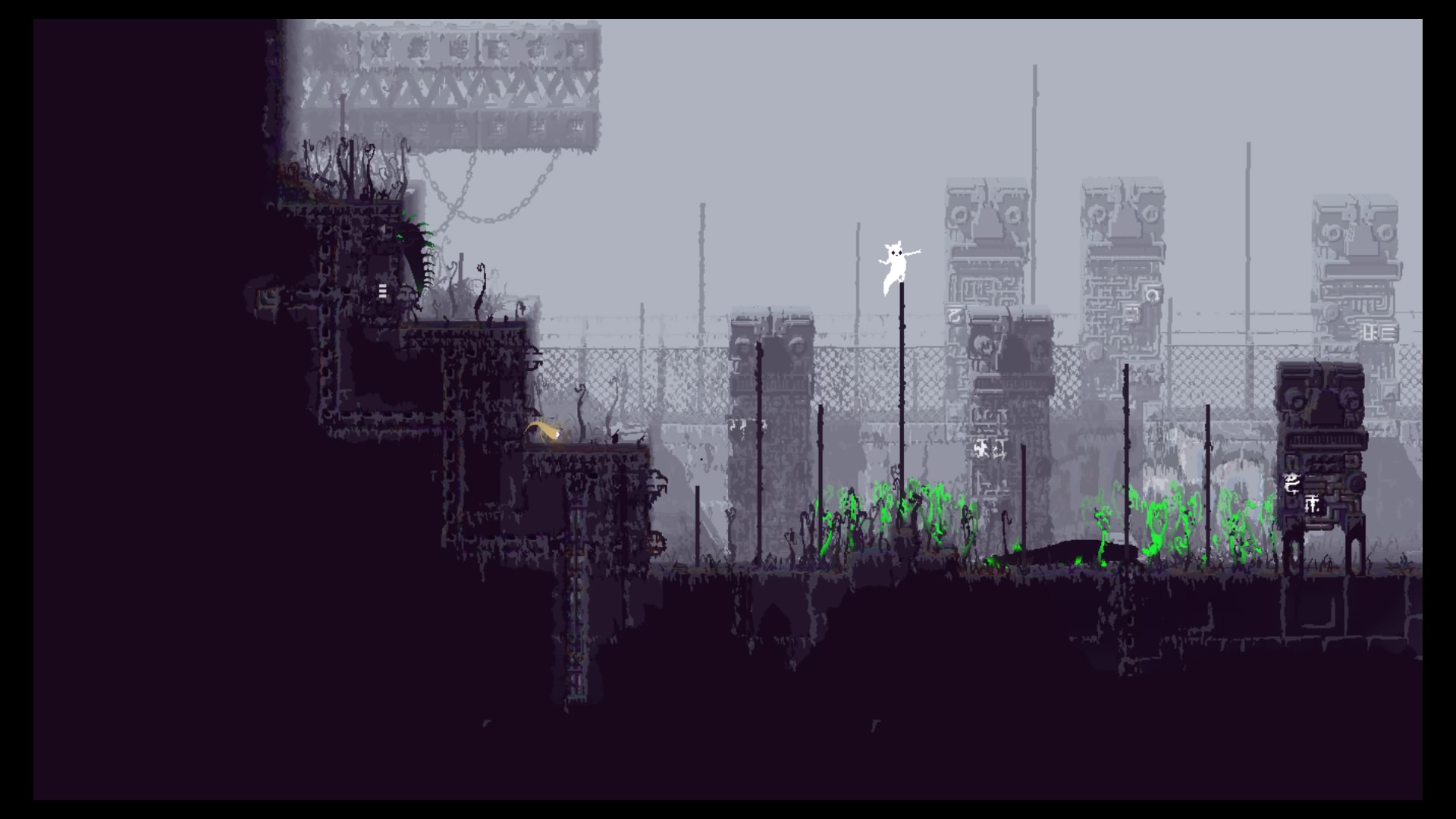 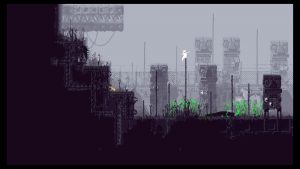 Rain World is an odd game and does some really interesting things.  Whether it succeeds is up for debate though.  At the most basic level it is a platform game, but look a little closer and it has hidden depths, even if these aren’t explained at all well.

Tone is everything here and from the off you’re looking at a game which feels melancholic and contemplative. You control a slugcat which, as the name suggests, seems to be some kind of cross between a slug and a cat.  An opening cinematic sets the story as slugcat is separated from it’s family and must apparently get home.  There is clearly lots going on here as the cinematic is detailed, but the game makes no effort to explain any of this.  This ambiguity infests the whole game and even now I’m hardly any the wiser on what is happening.

The slugcat can run jump and climb, and moves in a lithe sinuous way which is great to look at.  The developers have used some procedural animation techniques to make slugcat feel alive, and it does sort of work.  Slugcat will wrap up on itself and fall over it’s tail as it climbs up obstacles in a really organic way.  While this animation looks great it results in control feeling very laborious and deliberate, and it is nothing like as responsive as a Mario which is a problem when everything in Rain World seems to be out kill you. 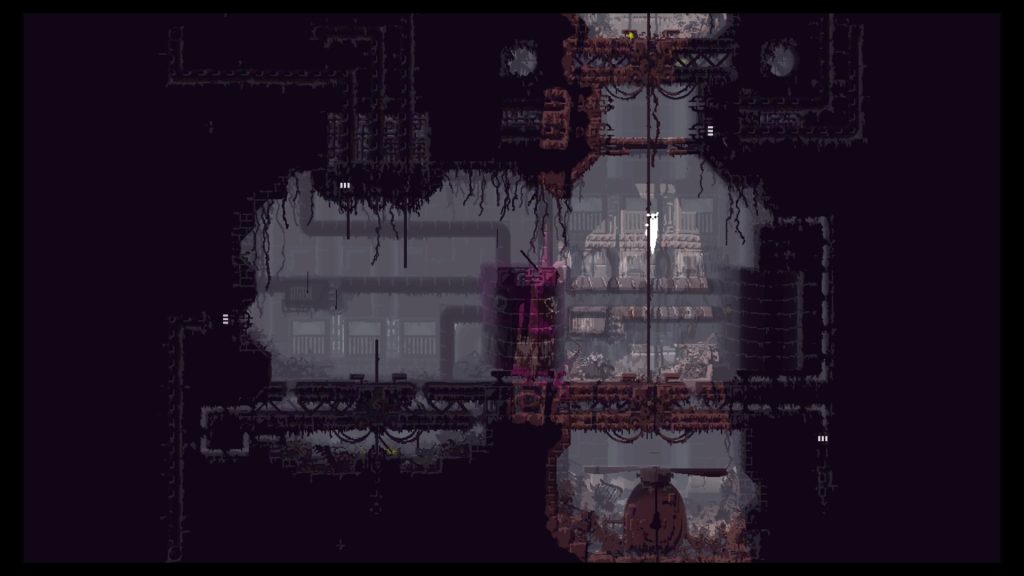 Rain World is a punishing game, in fact I feel it is far too punishing.  I mentioned above that the game didn’t explain itself and this holds true for both the story and the game mechanics. Basically you must navigate a series of interconnected rooms avoiding enemies and finding food.  There might be more going on here but as I said I’m not too sure. Slugcat gets through these screens by squeezing through pipes but often there will be enemies blocking your path, and these enemies are really dangerous.

As slugcat you are pretty much defenseless, you can throw rocks but these don’t really do much to damage enemies.  As such you need to avoid them but the sluggish controls get in the way here and the enemies invariably kill you when they touch you.  If you manage to avoid these enemies for long enough then you may get caught out in the rain, doing so will also kill you. The only way to avoid the rain is to find a spot to hibernate in, but these can only be used if you have eaten enough food, which needs to be replaced each time you hibernate. When you hibernate some glyphs will rotate, apparently moving forward one step, again I’ve no real idea why.  What I do know though is that when you die these glyphs move backwards one step apparently punishing you for dieing. There may be some deeper meaning to this but the game makes no attempt to explain itself. 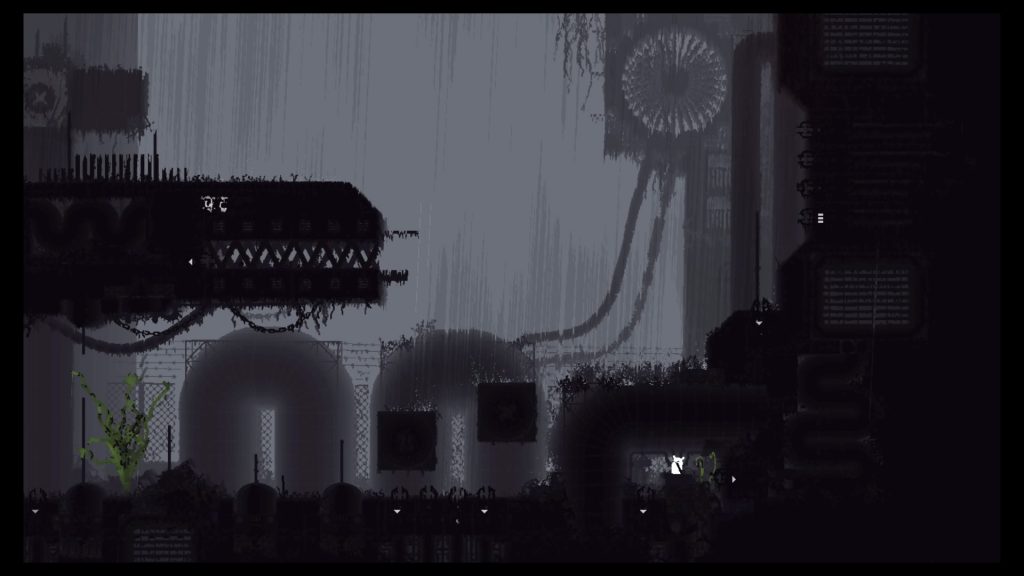 The one thing the game does have going for it is a very unique art style.  Everything looks drab, scruffy and scratchy and the bursts of colour when they do appear really stand out. The way music is used to warn of dangers and they way the rain looks when it eventually falls is great as well. I was very interested to learn about the world but as with everything else here there was no explanation forthcoming, which was a disappointment.

There just isn’t enough about Rain World to make it enjoyable to play. I’m sure there will be people out there unpicking the story and figuring out what its all about, and it is clear the game has serious depths to it.  But when my average run generally had me fighting with the controls, repeating the same jump over and over again until I managed it only to then die from a enemy on the next screen, I found it hard to appreciate these hidden depths. 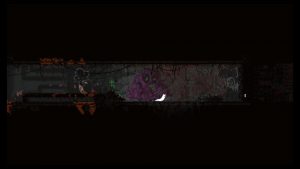 What we’ve got then is a sluggish platformer with copious instant death situations and infrequent checkpoints.  These factors all add up to a game which isn’t fun or easy and seems to actively frustrate any understanding of whats going on.  Whilst the art style and interesting setting can pull you in, that alone isn’t enough to keep you coming back for more punishment.

Rain World
5 Overall
Pros
+ Art style looks nice + The animation​ is wonderfully organic + I'm sure there is a deeper story somewhere here
Cons
- It is difficult to the point of no fun - The story and mechanics of the game are obscure - The controls aren't tight enough and feel like they are working against you
Summary
Rain World is a sluggish platformer with copious instant death situations and infrequent checkpoints. These factors all add up to a game which isn't fun or easy and seems to actively frustrate any understanding of whats going on. Whilst the art style and interesting setting can pull you in, that alone isn't enough to keep you coming back for more punishment.