Avenging Spirit was a 1991 action/platformer arcade title that was originally known as Phantasm to Japanese coin-op players.  Little known in the West at the time, we became aware of it thanks to MAME, the famous arcade emulator.  It was one of those hidden gems that looked great, had really interesting gameplay but ultimately never got enough attention from us because it’s all too easy to just play your favourites instead.

So, we were pleased to see this one pop up in the release schedule and especially pleased to see that Ratalaika were publishing it as they’d done a good job with recent ports such as Gleylancer and are known for giving you plenty of tools for beating particularly hard older games such as quick saves and a rewind function. 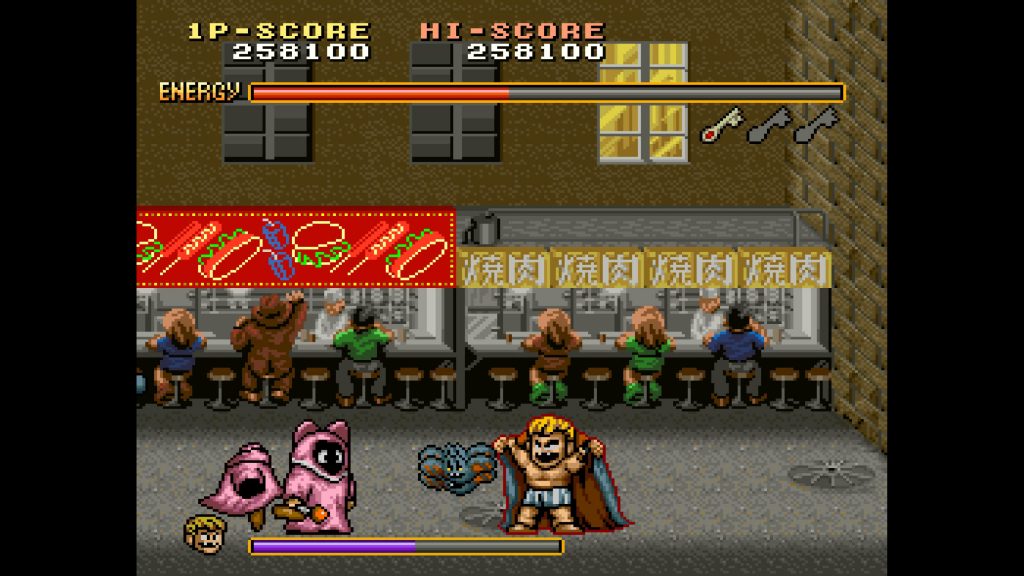 After a bit of plot that explains that you’re the ghost of a man who was shot during the kidnapping of his girlfriend, you play as a cute looking spirit who can possess anyone that you come across which allows you to control them and use whatever skills and equipment they have.  At least until that body is destroyed and then you’ll need another.  You’re a bit like 2000AD’s Judge Death but without the genocidal instincts.

Your job is to get through the six levels the game offers and rescue your girl.  And for a 1991 effort, this game’s core possession mechanic was really clever.  You can take over regular gangsters and soldiers, armed with the usual array of pistols, rifles, grenade launchers and so on as well other more exotic forms such as ninjas, vampires and robots.  It’s genuinely fun to see what each enemy type is capable of and definitely makes for some fun early play. 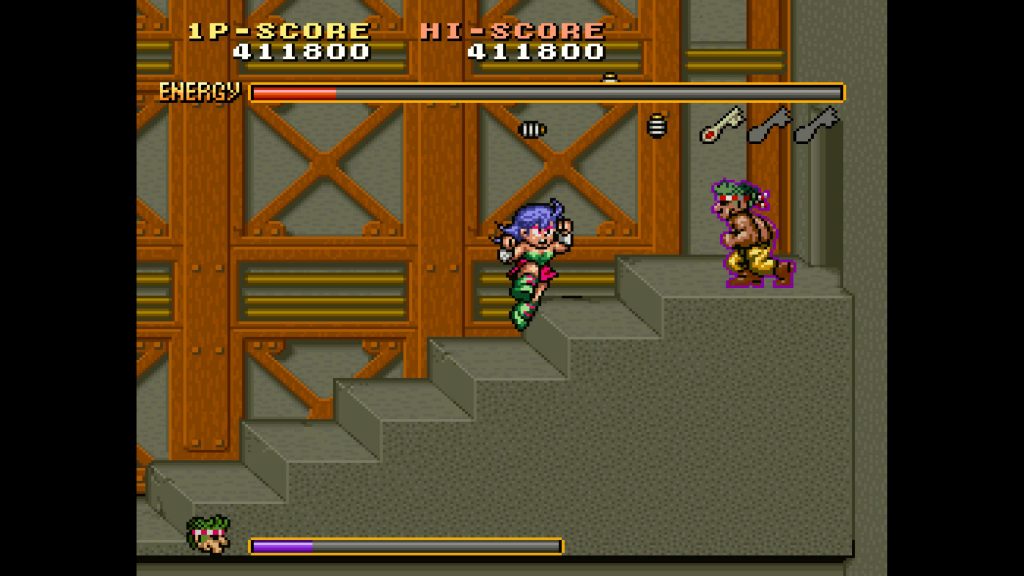 If your host body is destroyed, you can just float over to another enemy and possess them to continue your journey.  That said, you have a limited amount of spectral energy which is used up every time you do this.  Run out of energy and it’s game over.  In the arcades you’d then need to shove another coin into the machine but here you get infinite continues and as the game has no checkpointing, you just spawn right back where you were, making the game pretty easy.

If you want to 1CC the game, that’ll rely on you staying disciplined and restarting the game when you die but if you just want to see the content and play as all the enemy types, then this is the game for you.  There’s a little bit of replay value in there too as you need to find three keys along the way if you want to rescue your girlfriend and that’s far from guaranteed thanks to this game’s occasional sprawling level layouts. 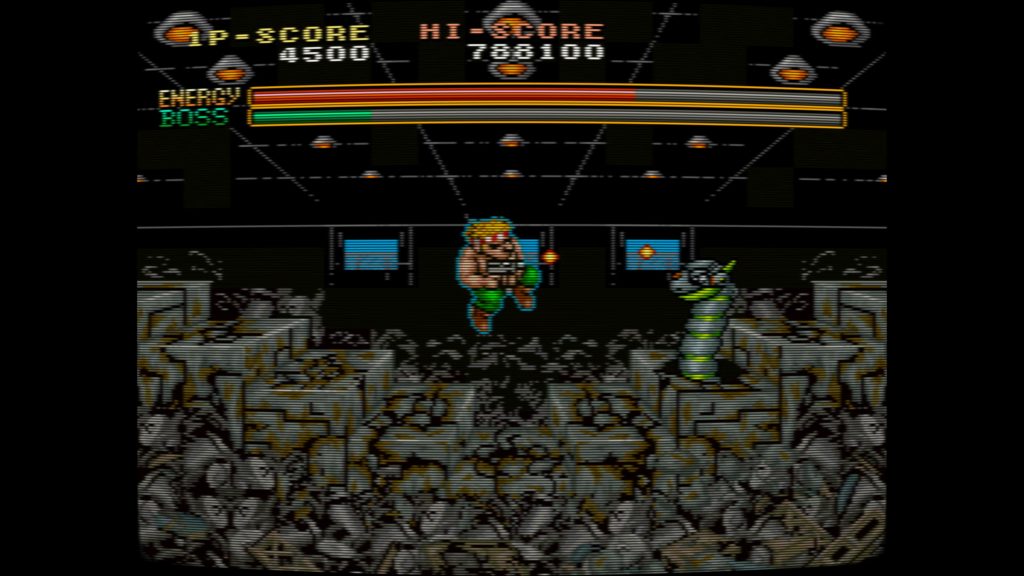 Avenging Spirit still plays well.  The chunky sprites give you a little less room to maneuver than we’d like, as does the old-school pixel count, but it’s never really a problem.  Each host body has a different jumping and shooting ability, so you’re sure to find ones that you prefer but, for the most part, they’re all playable enough unless you go into a boss battle with someone who is more melee-based.

As with other arcade ports from Ratalaika, you get some decent customisation when it comes to the screen layout with options to implement scanlines, different ratios and even simulate the curvature of a CRT monitor.  It’s all very welcome and compliments the game’s colourful appearance and decent looking sprites.  There’s plenty of character to the game. 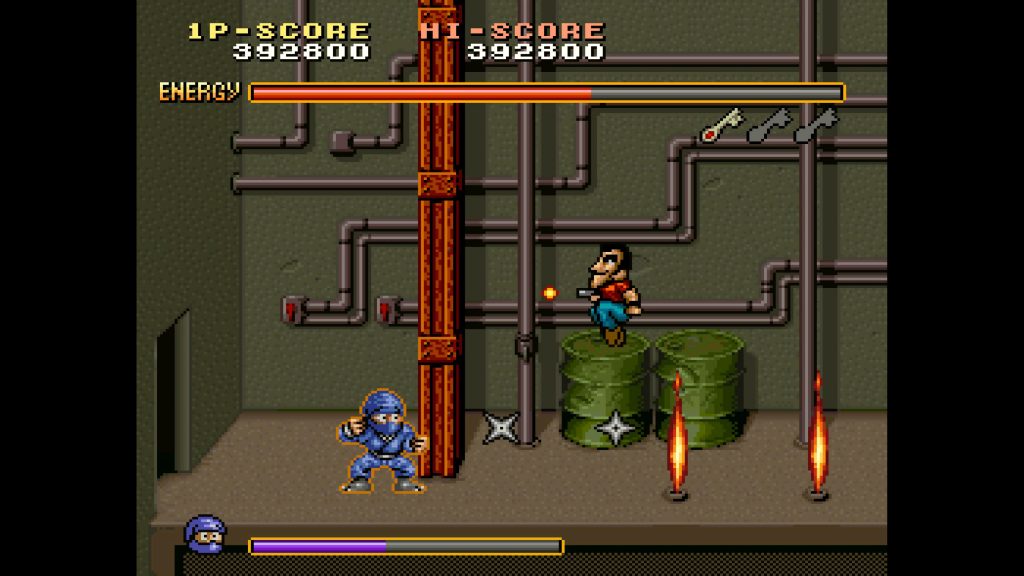 The sound is a little bit shrill though, like a lot of old coin-ops that were all competing for sound space over each other in cramped arcades.  But it all feels nostalgic for those of us who remember waiting to play our favourite games in sketchy arcades full of kids wearing awful Puffa jackets and shell suits.

As for recommending this game.  Well, sure, we’d rather see it on a compilation with other titles from Jaleco (although we’re hopeful that Rod-Land will get the porting treatment in the future) but for the relatively cheap price, this is a decent enough purchase.  However, we could only really see old-school retro gamers enjoying it but they should have fun playing Avenging Spirit even if its for the first time.  It may not keep you going for much more than a day or two, but this is one of the more interesting games that have been ported recently.  But seriously, do Rod-Land next.

Avenging Spirit
7 Overall
Pros
+ The original game is still fun, playable and interesting
+ Plenty of modern conveniences
Cons
- Rewinding, infinite continues and quick saves make it trivial to beat
- Sound is a little bit jarring
Summary
Avenging Spirit remains one of 1991's more interesting and original coin-op titles and so we're more than happy to see it get a new lease of life on the PS5. If you're not a retro gaming fan then this probably won't be for you but for everyone else getting closer to death, this is one of the more fun arcade ports on PSN.