There’s plenty about games development that fascinates me. Even working in small teams, there’s an air of luck and circumstance that comes together that bring a game to fruition. I’ll never be technically gifted enough to make something myself but there’s tools available to give me just a taste of that workload. Probe: A Game Dev Experience attempts to be a glimpse into how complicated projects are made. Unfortunately, it comes off feeling too slight and a little misguided. 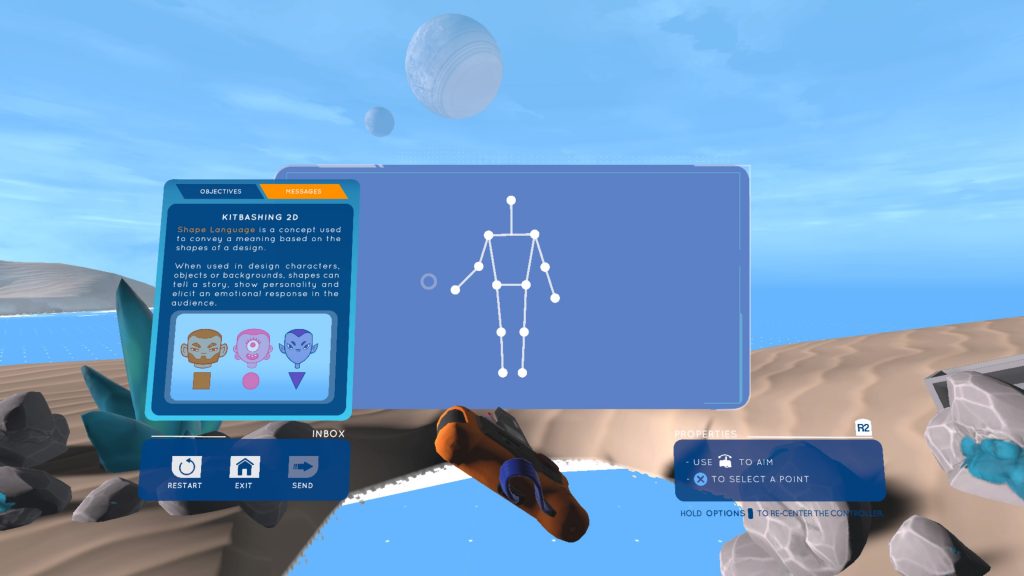 Developed by Voxel Labs, this educational product is aimed at prospective students. Under the PS Talents programme, Probe: A Game Dev Experience links you to online resources to take any potential interest further. It’s an neat concept and does offer the opportunity for students to learn more about game development. Unfortunately, the game itself doesn’t really do a lot for the cause.

Probe: A Game Dev Experience has an interesting presentation to it. There’s plenty of colour and the staff all look nicely stylised. It represents a relatively small team well and they all look individual enough to tell apart. That’s kind of crucial when you’re moving from person to person. It’s certainly an idealised glance at a working studio with mentions of crunch being skirted away but I see this game more as an wafer-thin advert for the industry. 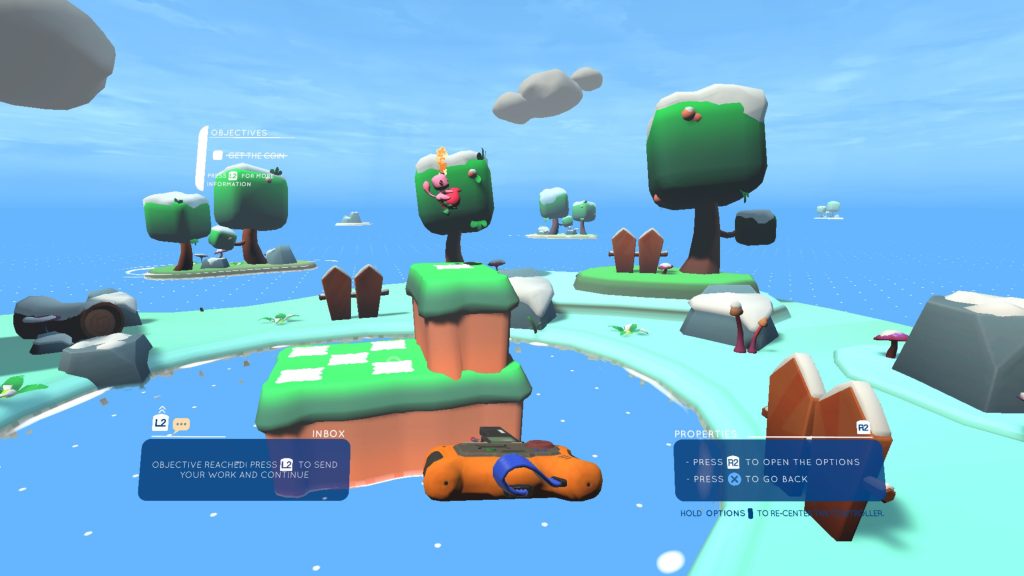 When the game does allow you to work, the areas populate in a stylish way that really appeals to me. It’s almost generated brick by brick and emerges from a Tron-like ether. It’s nice to witness, even if it does just lead you to a very simple exercise. There are three sections in total. Art, tasks you with creating characters from pre-fabricated assets. You have a little creativity in terms of what to place where but you’re confined to a skeletal frame. Once that’s all decorated, you’re on to the next model. The lighting section asks you to like a few scenes using different light elements whilst the artificial intelligence exercises task you with some simple logic loops.

These could be more compelling if I was given more context. Rendering light is effectively using maths to replicate the real physics of light. It’s a deep and complicated process and it’s one game developers have become really good at faking over the years. How each exercise is presented is so bare-bones that it makes me wonder just what Probe: A Game Dev Experience is trying to sell. 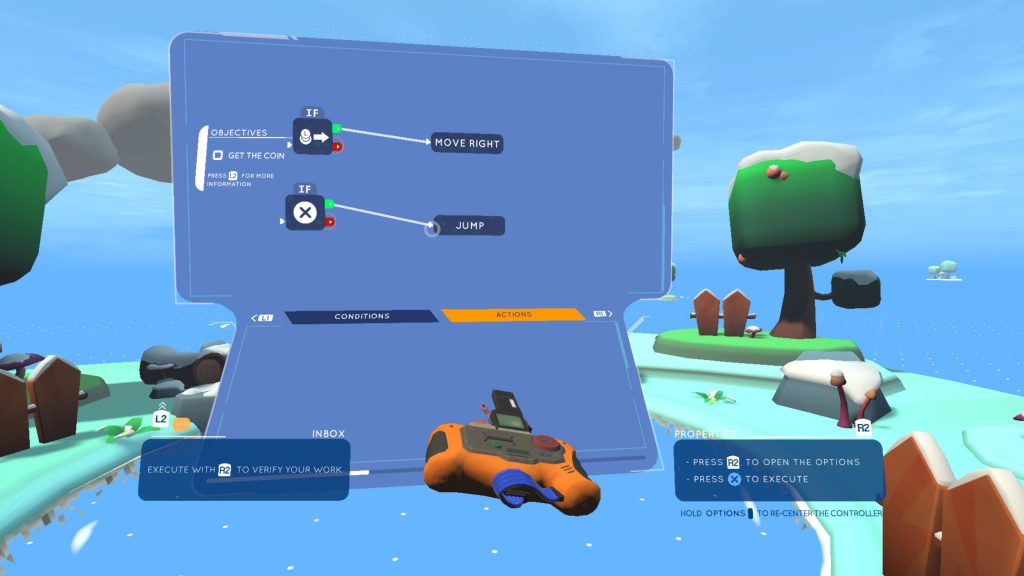 Every challenge is presented as a problem the game developers need your help with but there is no real background, nuance or weight to it. You make the thing, you’re thanked and you’re on to the next thing. For an educational eye-opener, it’s not keen on telling you much.

Interaction with Probe: A Game Dev Experience are predominantly motion-controlled. It was designed with PSVR in mind but those without a headset can get by with a DualShock 4. As a result, you’re moving the controller and the light bar on your pad is being used to track your movements. It works, although it feels fairly clumsy. It was probably down to my setup but I needed to re-centre my position plenty of times. You do have a reliable pointer that keeps your position well but it can feel cumbersome, especially when dealing with depth.

Thankfully, the simplicity of the tasks mean you’re not held up too much. There’s enough feedback to keep you moving as points of interest and objectives draw your attention right to them. I’ve had one curious glitch where the cow used for the artificial intelligence sections spawned outside the map but a quick restart fixed that. Whilst the controls weren’t too my liking, they didn’t impede what is essentially a boiled down, slim interactable. You can see it all very quickly with no incentive to replay. 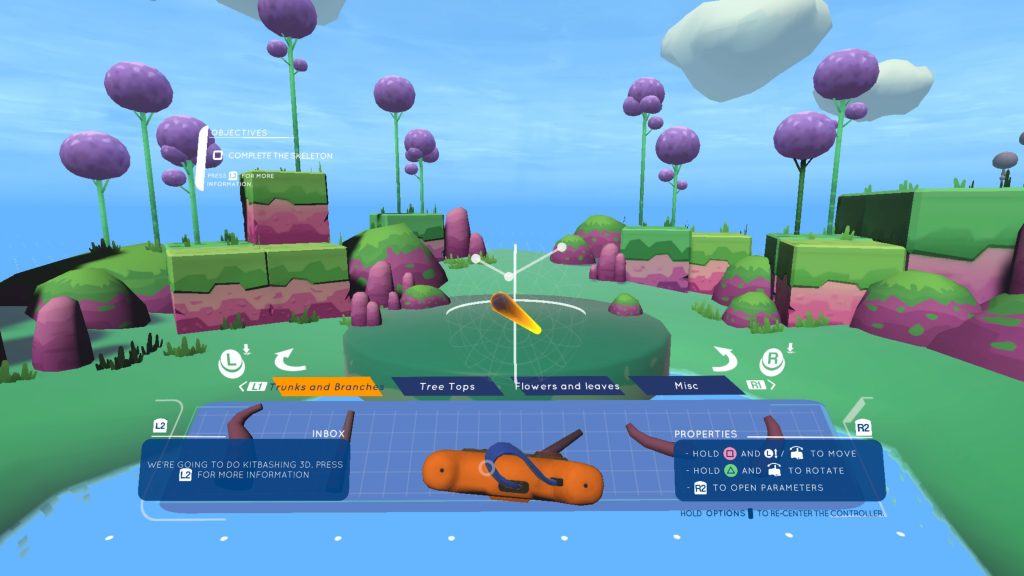 There’s plenty of missed opportunities here. I do find the representation of a small team to be enticing. There’s dozens of people in the office that all look hard at work. Unfortunately, your interactions with them feel flat. I’d like to know their jobs, what do they focus on, backgrounds or anything just to get a better feel of game development. As it is, the more intriguing aspects of Probe: A Game Dev Experience is locked away behind registering on a mailing list.

I’m not entirely sure who would benefit from Probe: A Game Dev Experience. The three elements of lighting, art and artificial intelligence are explained in some rather basic terms. For a product that links to educational materials, it’s too simple for the students they’d be looking to recruit. It’s perhaps too complicated to interest a younger audience.

Probe: A Game Dev Experience
3 Overall
Pros
+ Presented well with some visual flourishes.
+ Tasks are real simple and easy to grasp.
+ Links to some more worthwhile educational resources.
Cons
- Does very little to contextualise and educate you on game development.
- The motion controls can feel cumbersome.
- Too small and simple to sell the industry to their intended student audience.
Summary
Probe: A Game Dev Experience criminally undersells it's own industry. Whilst I did struggle with the motion controls, the tasks I was given were basic and over fairly quickly. It's the lack of context that troubles me. Adding lighting to a scene or AI to a character is fine if I know why I was doing it. For an education product, it doesn't sprinkle any interesting insights about the workings under the hood. It's far too simple for it's own good.