Milestone return with yet another officially licensed motorcycle game. This time, it’s the turn of arena-based Supercross with Monster Energy Supercross – The Official Videogame. Taking what they’ve learned with the MXGP license, they’re hoping to do the same for the twisty, louder discipline. 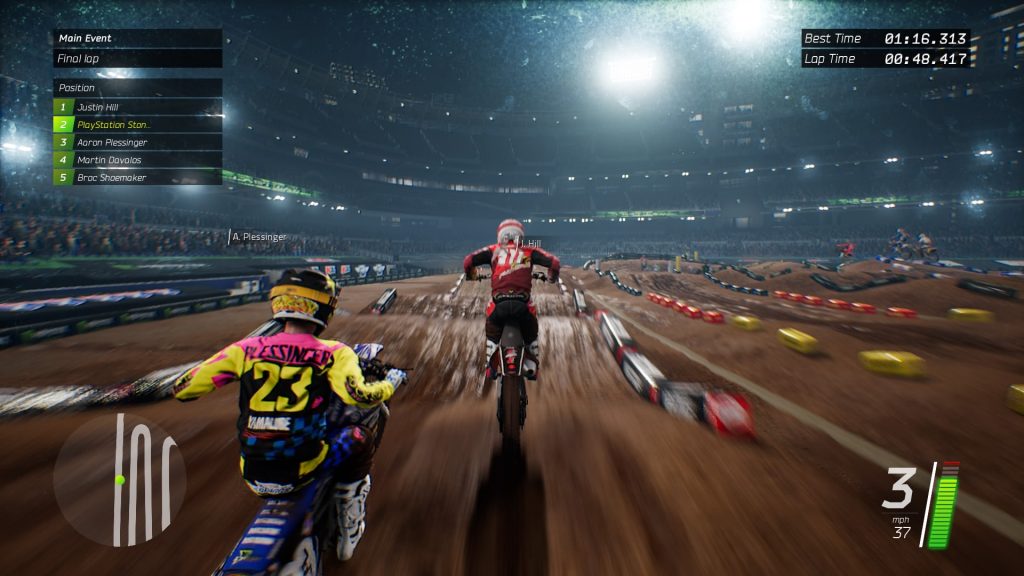 As with most sports games, you’re placed in a race to familiarise yourself with the controls. Sadly, there’s no tutorial in this opener so fresh meat will probably be struggling. There is a tutorial section in the menus but it’s confined to text instructions rather than tasking the player with executing prompts. It doesn’t make a good first impression as you try to find your feet. You’ll be doing all your education on other modes as the introduction leaves a lot to be desired.

Riding in Monster Energy Supercross – The Official Videogame has a large emphasis on flow which Milestone have managed to recreate handedly. You ride bumps, take jumps and slide around the muddy stadiums of North America. As a result, you’ll be trying to understand the track surface as much as the opposition. The right stick controls your rider’s body position which allows you to execute scrubs and lean your weight into landings to great effect. The curve is steeper as you advance to more powerful bikes, too. More power means knowing how to use it. There’s a lot to take on board for new players but veterans should feel comfortable. Race options do provide accessibility and can automate things like rider weight. 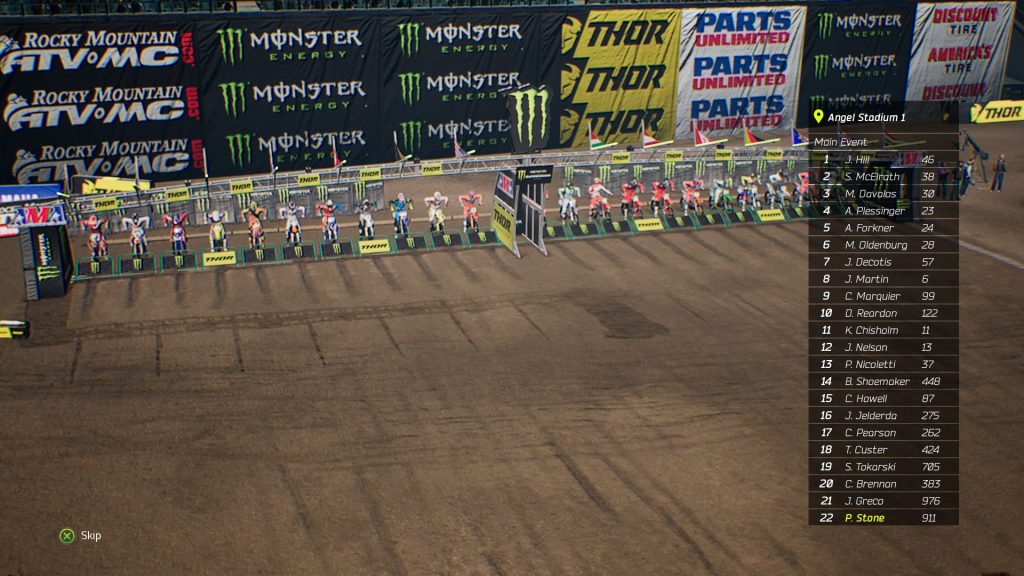 There’s a nice sense of accomplishment that comes from mastering a track and the racing feels competitive, even if the claustrophobic nature of the start can feel a little chaotic. For the most part, the physics on show behave realistically but there’s definitely anomalies as you get catapulted off bumps. You can happily land on top of another rider for a few seconds. It’s not game breaking but will raise the odd eyebrow. They manage to cram a lot of track within an arena playground and it teaches you to be aware of what’s coming. Poorly judging a jump can see you land into a completely different part of the track. You are reset quickly but it does mean errors can be costly. It enhances the learning experience but will frustrate players until they understand bike and rider control. Thankfully, you do have rewinds available to undo any errors.

On a technical level, attention has been given to the rider and bike models. The license allows them to accurately portray the locations on offer. The lighting and atmosphere of the night time races give the game an interesting visual aesthetic, even if the fidelity is not as sharp as its contemporaries. Tracks are tight, twisty and provide a lot of opportunities for errors and spills. The boundaries of the circuits are marked with bollards which can be knocked and ran over during contests. Combine this with the track deformation and you have a surface which shows the scars of battle over the course of a race. Those stray obstacles can cause problems with the physics. I’ve found myself stuck on them during a race which results in a clumsy attempt to reverse back onto the riding line. I wouldn’t mind it if it were an isolated incident, but I’ve found it a little too easy to recreate.

Races prelude and conclude with some explosive pyrotechnics and, on the whole, it all looks appropriately busy. Races are introduced by the excitable tones of Ralph Sheheen but the sound design feels a little bland. It could just be me concentrating on the sound of my own engine but, I don’t honestly feel the crowd reacting to the action. There’s also the accompaniment of some forgettable background music which doesn’t do much for me. 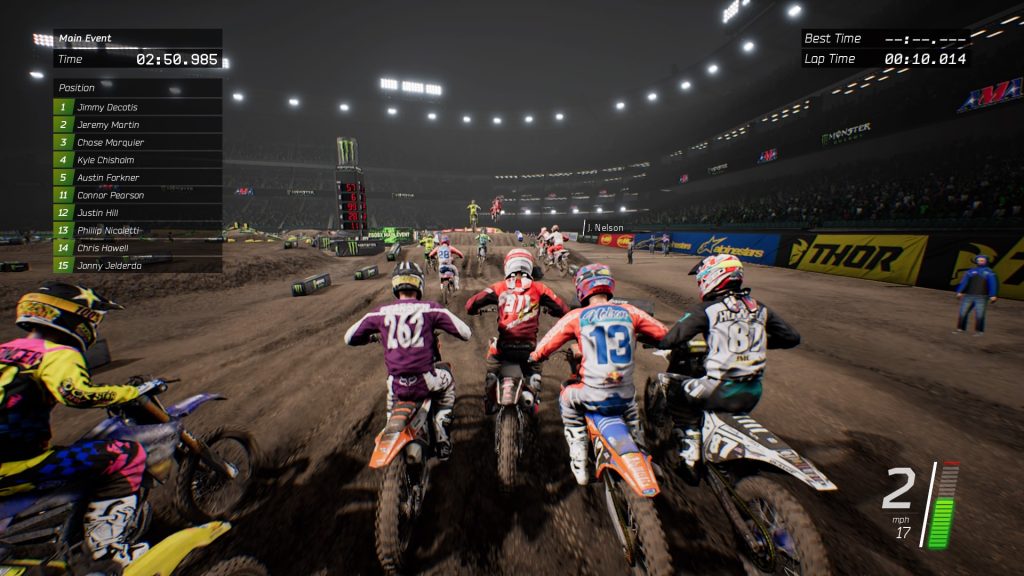 Some more common issues are intrinsic with Milestone’s tech. Loading into new events takes a while. You can get used to it but even starting the game up takes longer than I feel it should. It’s been like this for years and it’s a shame they haven’t streamlined that. There’s a telltale pop-in when entering new arenas or scenes and shows a continued lack of polish in some respects.

You’ll find the usual modes on display. You can take on single events, time trials, championships and the flagship career mode. The latter allows you to take a custom rider from the lower ranks to the Supercross championship. As you complete events for credits, you gain notoriety with sponsors which helps bolster your money pile. Between events you can check out your fake social media accounts and your results help tick off little accolades which you can work towards. You can tweak the length of race weekends to become more immediate or closer to the authentic experience. Short weekends help churn the events out and make seasons feel brisk. There’s a little less on-track progression to chase due to just the three championships being on offer. That’s more an issue of the license but the shorter nature of the seasons helps move things along.

Online competition also tows a familiar line. You can race single events and championships. As usual, the lobbies are populated a little sparsely pre-launch. Some attempts to get races going have been timed out but, once in an event, it functions well. Given how the discipline emphasises flow over raw speed, racing against fellow humans can feel pretty special. 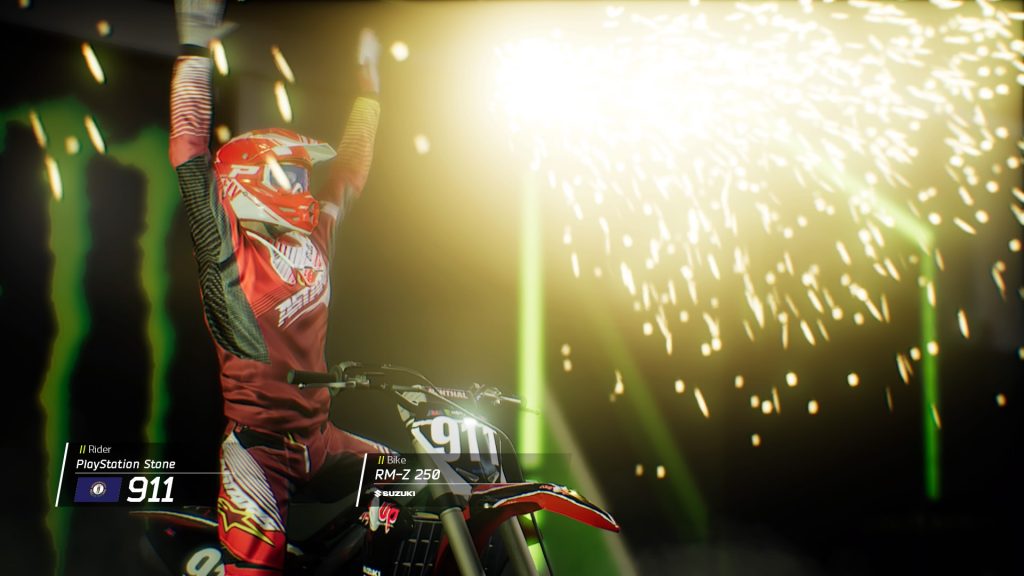 Finally, there’s a comprehensive track editor which allows you to create and share custom circuits. It’s fairly simple to use with prefab track elements being plucked from a menu with ease. It’s laid out a little utilitarian but it offers enough complexity to create some interesting designs. The possibility of sharing them is welcome. It’s a feature you don’t expect to see from a licensed effort so it’s a nice surprise.

I may have found myself more down on this product had the license and subject matter not been something relatively new to me. Milestone’s efforts have shown some minor incremental improvements over the years but they’re continuing to broaden their library of motorcycle disciplines which manages to maintain my interest. There’s an accessibility on show that’s looking to cater to a broader spectrum and the racing remains competitive.