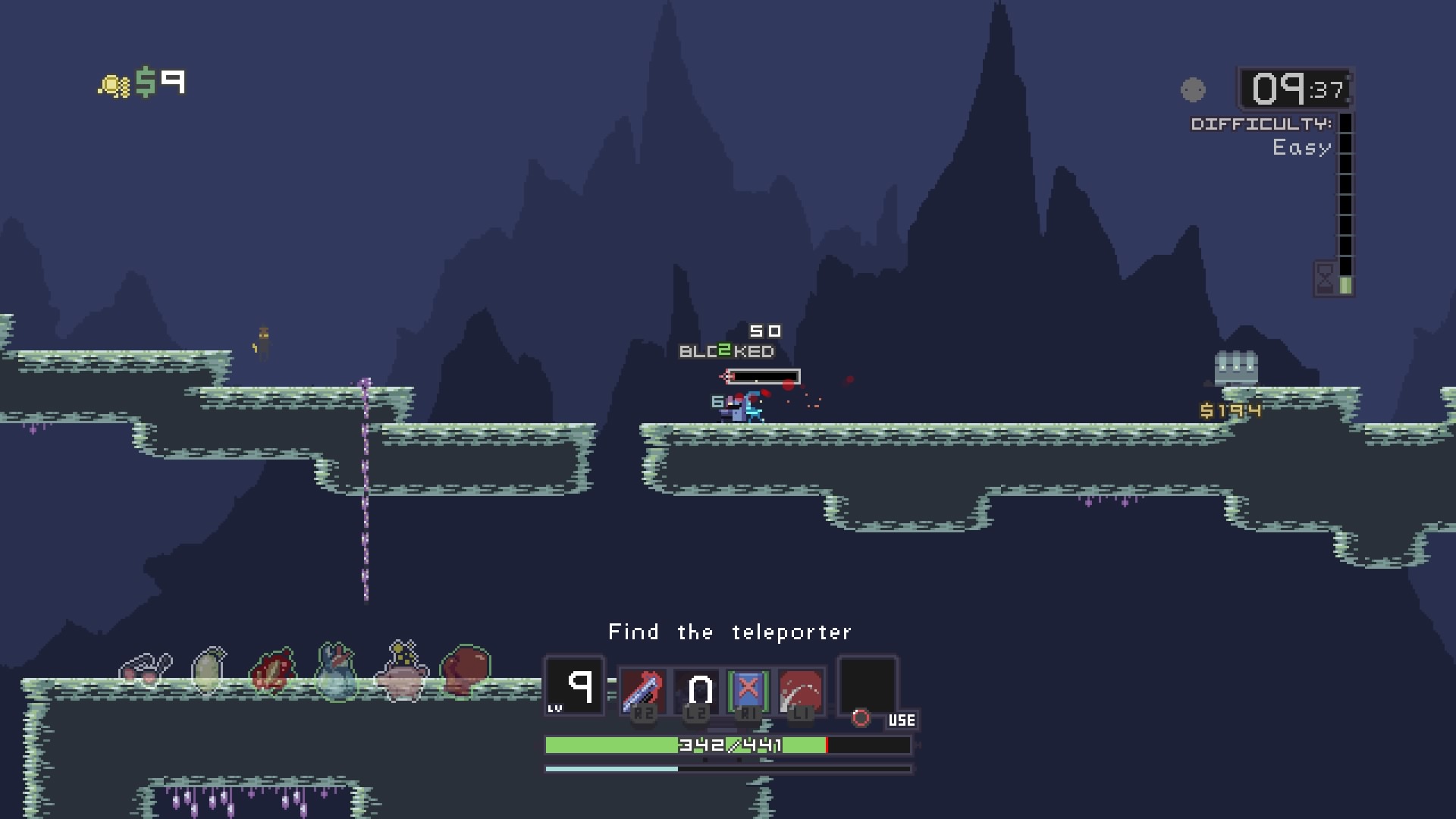 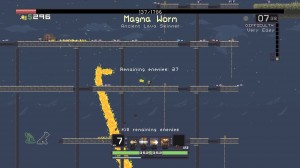 The thing with reviewing games is that sometimes once the review is done, the game is done.  A good example of this was the recent roguelike, Enter The Gungeon which is good game but it just didn’t grab me like I had hoped and once the review went live, that game and I went our separate ways for a while. Other review outlets loved the shit out of it though and sometimes you wonder ‘is it just me?’ when you don’t feel the same.

A week or so later, Risk of Rain appears and does many of the same things as Enter The Gungeon. It’s a roguelike. It’s 2D with retro graphics (arguably worse graphics than Gungeon in fact).  It’s loot-based.  It’s pretty tough.  Basically, that’s the description of so many indie games right now, it’s hard to not hate it right out of the box.  Here’s the thing though.  Risk of Rain is fantastic.

Seen from the side, this is a platform shooter essentially.  You’ve landed on a planet and pretty much you have to fight, loot, explore and survive.  You start off in a level and have to find the exit teleporter.  The levels aren’t huge but you will need to explore.  In your way will be various enemies that get tougher as you go along.  Boxes and crates offer power-ups that you can either win, buy or get for free and these stack to eventually make you quite the force to be reckoned with.  Unlike Gungeon, the power-ups are nearly all useful and so collecting them becomes a joy.  A run isn’t going to be destroyed by getting bad power-ups but can be enhanced by getting the best ones.  It’s just the kind of loot progression that we want to see.  Progress should be constant and rewarding.  Mess that up and your core game just isn’t going to be as fun as it should be.  Risk of Rain does it perfectly. 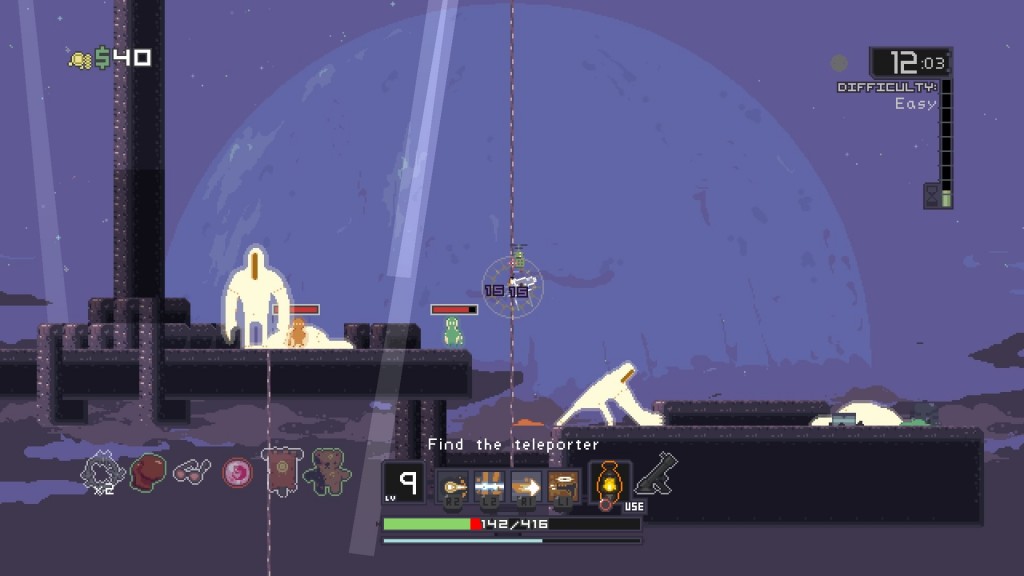 The combat is decent.  You’ll be forever trying to mix offense and defense.  Trying to keep your distance while putting out enough damage to keep yourself safe.  You have four buttons associated with combat, each mapped to an ability.  These have a cooldown but need to be used often if you want to survive the sort of encounters this game puts you in.  Enemies teleport in and will follow you as much as they can (some fly where as others can’t even jump) and you’ll definitely want to use the various ropes, platforms and drops to keep yourself safe.

When you get to the exit, enemies respawn constantly for 90 seconds and you have to defend yourself.  A boss will also drop in, dealing huge damage as you chip away at its health bar.  It’s standard stuff but (sorry to keep picking on it) unlike Gungeon’s soul-crushingly tough boss battles, these aren’t end-of-level progress stoppers.  They are no cake walk but most of my deaths seem to come from outside of boss battles. 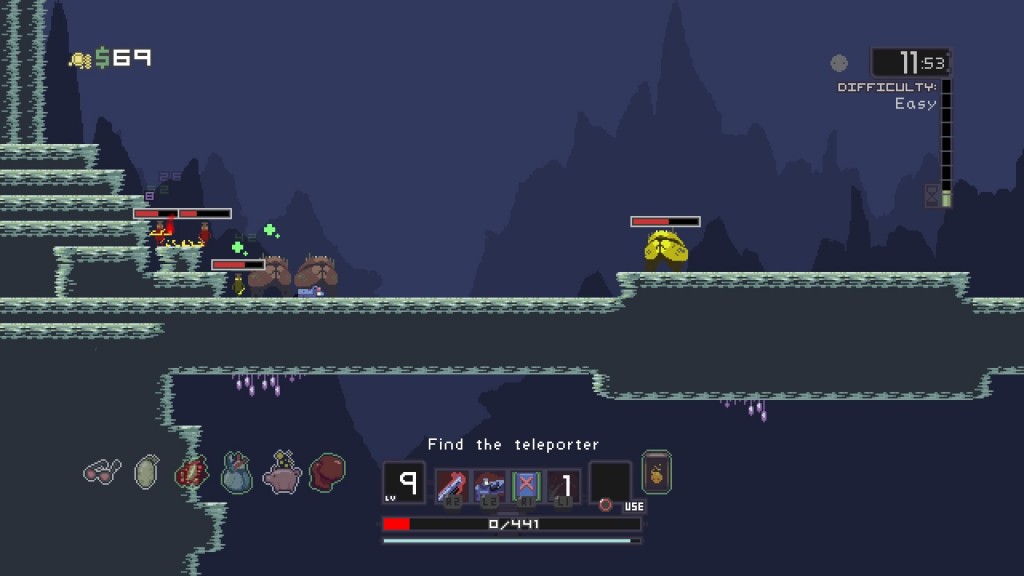 And those deaths will come, son.  It’s not that the game is punishingly difficult.  The game scales up in difficulty over time (it even tells you where the difficulty level is at) and its a great curve.  As you learn how to cope with enemies and manage power-ups, things get better and you get a bit further.  It’s well-considered and rewarding.  You don’t feel like you’ve hit a wall because your next run can be entirely different.  The boss that previously killed you may go down easier with a different mix of power-ups or a different character class (there are plenty of these, all with very different skills).

The graphics aren’t exactly hi-res and they don’t exactly enhance the combat but you’re never going to die because the visuals let you down either.  Indeed, the visual style is one you’ll either like or hate.  There are lots of enemies and items and everything has a bit of character but it is all pretty tiny and about as retro as you can get away with these days.  I didn’t mind the look in Terraria but this goes smaller and less-detailed.  It could be a concern for some. 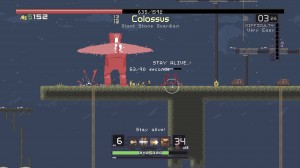 The best part of the package is the power-ups.  In-game achievements unlock the chance to pick up new ones all the time and you’ll be excited to see what items are out there ready to help you.  They all do something useful (so far) and it adds to the addictiveness when you think there may be a really good item coming.  Add to that all the classes you can collect (these are earned via in-game achievements too) and it’s just more reasons to keep playing.

On top of all that, there is a FANTASTIC soundtrack, off-and-online co-op and clever little descriptions of everything you collect.  There’s a lot of love in Risk of Rain but also a hell of a lot of smart design choices.  And it’s a cross-buy too but one of the rare ones where the games feels great on both the PS4 and the Vita.  So, if you’re burned out on indie games that are out of fresh ideas, this may be the one that wins you back.  It might not look like much from the screenshots but Risk of Rain is an absolute banger.