We reviewed Bleed just under half a year ago on its PS4 release and enjoyed it a great deal. Although on the short side the controls were tight and the boss fights required your full attention to best. Bleed 2 has now landed with the same one man team behind it and I have to say it’s an improvement in almost every way. 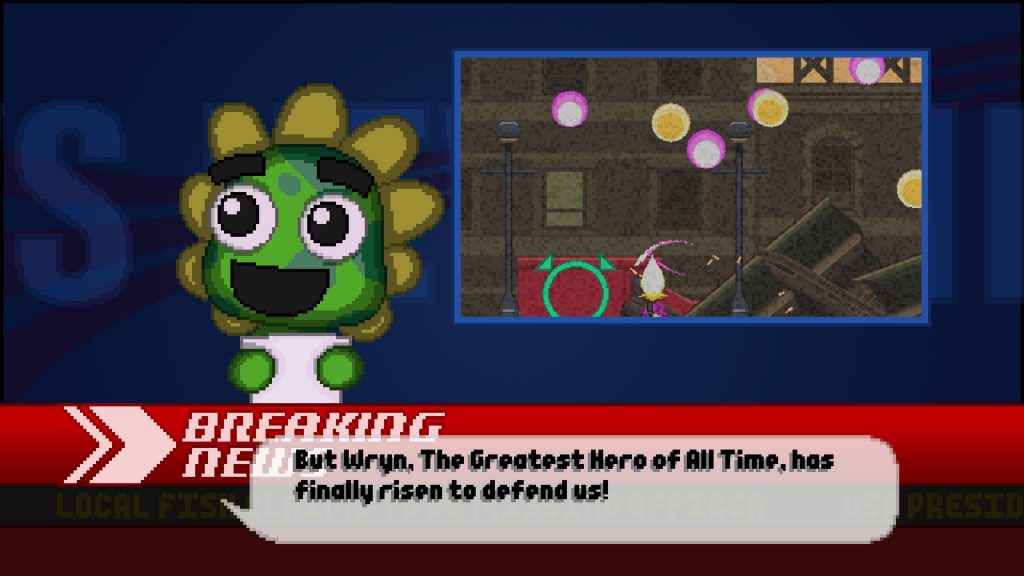 The game continues on from the ending of the first with your character Wryn being the Greatest Hero of All Time. Unfortunately her gaming time is cut short when the city falls under attack and she must get to work defending it. As with the first game the story, although fun, is only there to frame the action. At the end of each level you get a news report talking about what Wryn just did from the people’s perspective but there’s not too much explanation needed. Run to the right, shoot stuff, dodge stuff, kill bosses. That’s all the need to know.

If you’ve played Bleed then you’ll know exactly what to expect. The visuals have had a slight upgrade but the low tech, stylised visuals are still present. They are clear though, you can never complain about being hit by a bullet you can’t see and the variety on show in the environments and backgrounds is impressive. The music is excellent with the rocking soundtrack getting the blood pumping and making every slow motion dodge and reflected shot feel even more epic. 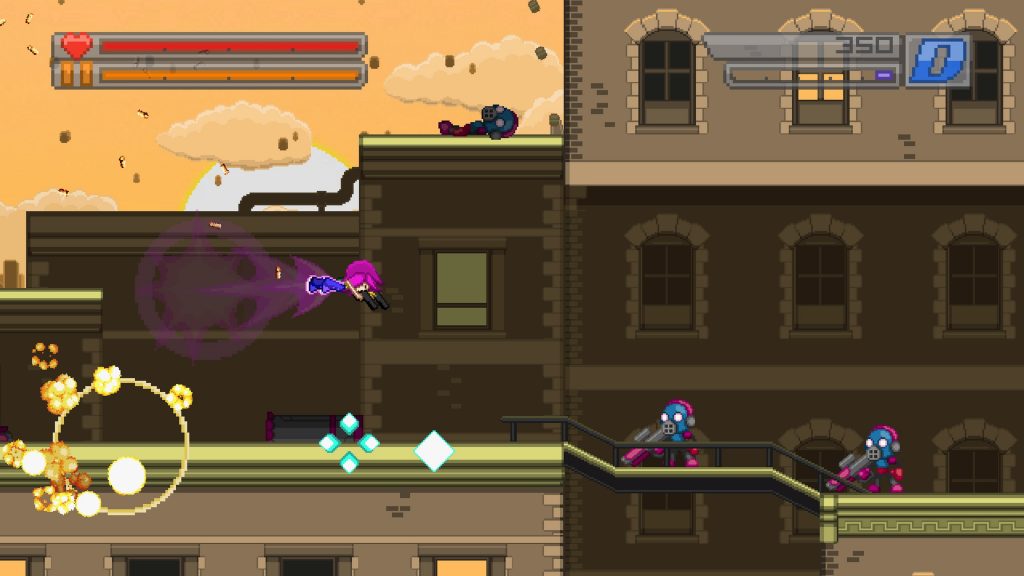 You run around on a 2D plane with some light platforming, but mostly shooting enemies with the right stick (no button press required). On R2 you have a jump, once you’re in the air you can dash up to three times in any direction giving you an incredible amount of mobility. L2 slows time, allowing you to dodge bullets with great accuracy and give yourself a safety buffer. Pistols and katana are the default weapons (more will unlock as you complete the game on different difficulties, you no longer have to earn and spend points to unlock things), with the pistols firing rapidly and the katana swinging when you initially tilt the right stick and with a press of R1 if you’re already firing. Of course the katana can be used to hit things up close but more important is that you can use it to deflect attacks that are purple, doing major damage.

You unlock new weapons as I said and also new characters which play differently, but these basics are all you get and they’re all you need. The levels themselves aren’t that long, maybe topping out at around eight minutes if you run through them efficiently, but the variety of the stages and the sheer amount of bosses keep things fresh for the, again, unfortunately short playing time. There are only seven stages but over twenty five bosses so it’s not as simple as one level, one boss, onto the next. The developer obviously understands the genre with stages, set pieces and bosses that were constantly reminding me of classics like Contra and Gunstar Heroes. Each boss is unique, some testing your dodging ability, some having a basic puzzle solving element, but each are a challenge. 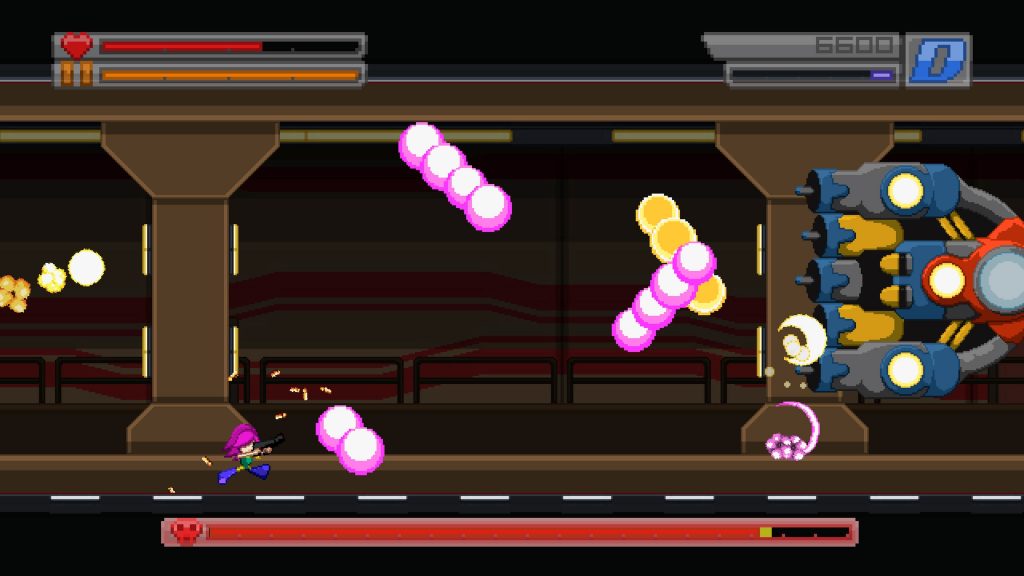 You’re graded on your performance in a level, the determining factors being time, damage taken and style. This, along with the extra difficulties, is where the replay value comes in, extending that hour long play time to however long you’re willing to put into it. Higher difficulties mix up enemy placements and boss patterns rather than just upping their damage which is always a nice touch. On top of the Story mode there is an Arcade mode which is the same as Story mode but you only have one life for the entire game. There is a Challenge mode which allows you to practise boss fights or fight up to three at once if you want to really test yourself. Endless mode tasks you with defeating five randomly created stages, built with enemies from both the original title and this sequel, each with a random boss at the end. These modes also have a difficulty selection and everything can be played in local co-op. 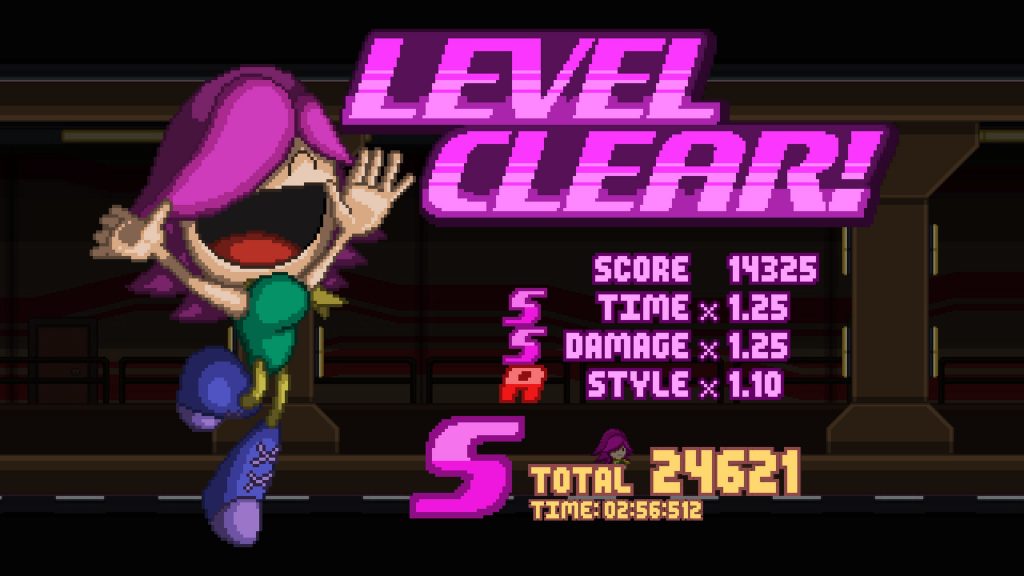 Much like the first game the amount of value you get from Bleed 2 will depend on how you approach it. Play it once and forget about it and you might feel short changed even with the low price tag. If you enjoy the gameplay enough to want to attempt each difficulty and try to beat the game in one life, again on each difficulty, then there’s actually a lot of game here. The controls and level/boss designs should be applauded so if you like your side scrolling, arcade style action games then you need to check this out.

Bleed 2
8 Overall
Pros
+ An improvement on the previous game in almost every way
+ Controls are tight, giving you lots of freedom
+ So many varied bosses
+ Loads of replay value
Cons
- One playthrough only takes an hour
Summary
Bleed 2 improves on the original in almost every way. It's still short but the gameplay is well designed and the controls are tight meaning you will want to replay it again and again, much like the arcade classics it draws inspiration from.