At some point, we all played dodgeball in school. We all remember how it feels to be pegged square between the eyes and would prefer only our ego was bruised. Thankfully, plenty of games have taken the idea of such competition to heart and the latest to hop across is Strikers Edge. Fun Punch Interactive are hoping their medieval spear-chucker can rekindle a few couch and online rivalries. 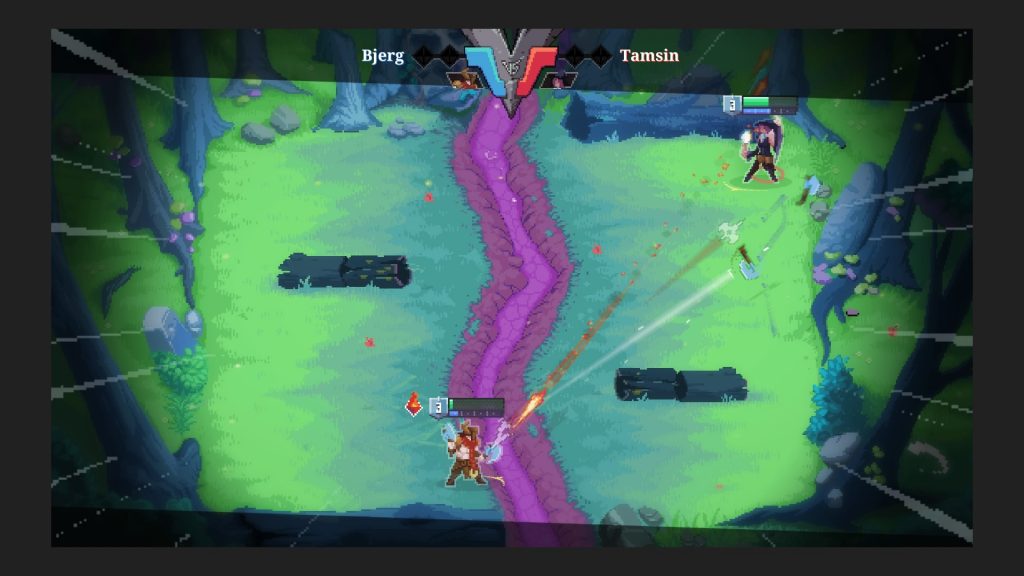 On the face of it, combat is simple. Two opposing forces stand on either side of a segregated map and throw projectiles at their opponents. It’s easy to understand and a brief tutorial explains how to control your heroes. You have a basic form of attack which is governed by a stamina meter. It’s usually quite generous but, in the heat of battle, you do need to sometimes take stock and recharge. Charge attacks offer more power but, predictably, you’ll feel exposed as you wait for the time to strike. Movement is slower during this period so deployment requires a touch of strategy.  Defensively, your have dodges and blocks at your disposal. They also use up stamina so, again, knowing when to use them is key. Helpfully, each stage offers options for cover. More often than not, your best form of evasiveness is to rarely stand still. I found most matches resulted in this cat and mouse chaos which can be fun to see play out. You can also cancel projectiles out with your own. 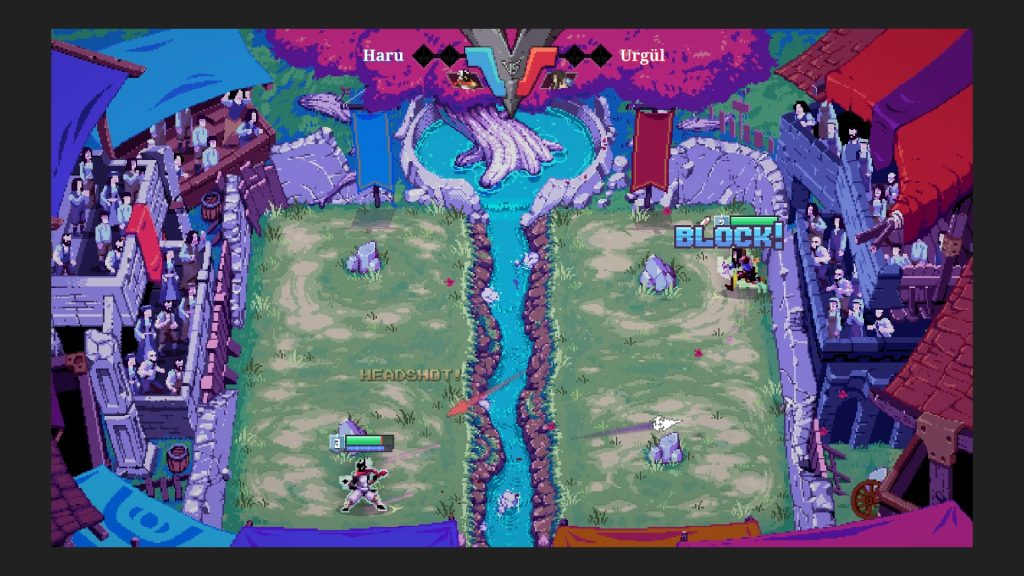 The core combat of Strikers Edge is pretty compelling. It feels mostly balanced with the cast of playable heroes providing more subtle changes with their different special abilities. Some can regain health on successful blocks, others can deliver status effects. Whilst I wouldn’t mind a touch more variety, it’s welcome to see a roster that doesn’t tip the scales much in one character’s favour. It’s a party game, after all.  There’s a varied cast of archers, witches, Roman centurions and a good, old-fashioned black knight to tinker with.  Matches do tend to follow a familiar format as both sides try to scramble for position and arrows reign down. Your health pool isn’t huge but it does allow you time to rebound from tricky situations. Movement is quick and there’s some stylish slowdown applied to killing blows and crucial, last gasp evades. I can appreciate the flourishes on offer and the movement of the mayhem, especially when it’s in full flow. 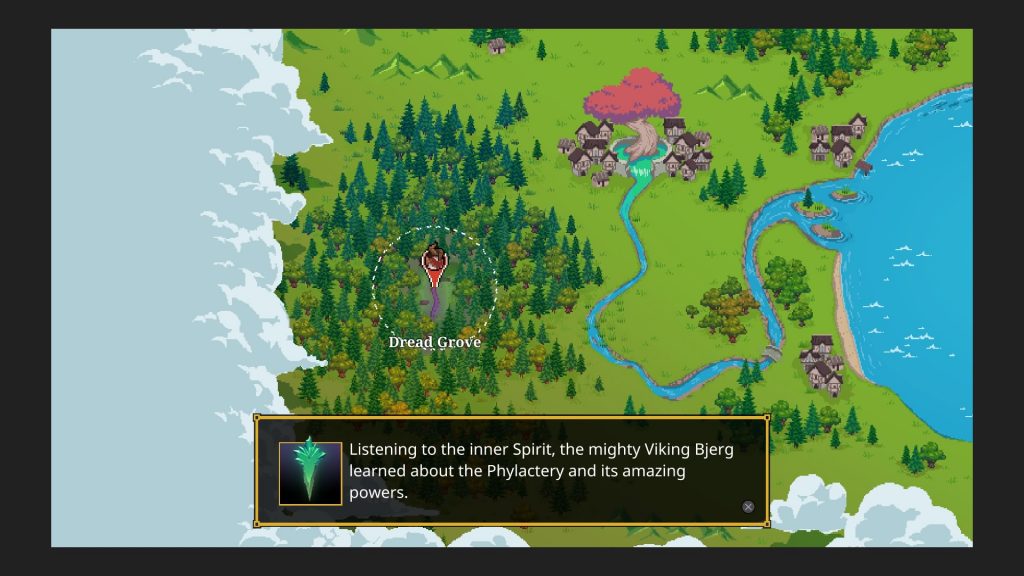 You can throw down in a sparse offering of modes. Your single-player component comes in the form of a brief campaign. Over a few bouts, you’ll travel through the game’s four stages and encounter some of the game’s motley crew. There is a story but it feels like a boiler plate effort to bookend the battles. A text-based scrawl introduces our characters before a back-and-forth exchange precedes the fight. I find it a little bland and safe to be showcasing your campaign like this. Aside from that, there’s three modes of difficulty which can provide ample challenge for those that want stern opposition.  It’s a shame as the actual action is presented well. The pixel-art style is often replicated but it’s easy to follow the action and the game’s stages have plenty of life to them. There’s flora, fauna and some stage hazards which make each one come with their own challenges. It’s accompanied with a tuneful soundtrack that gives each fight a frantic score. 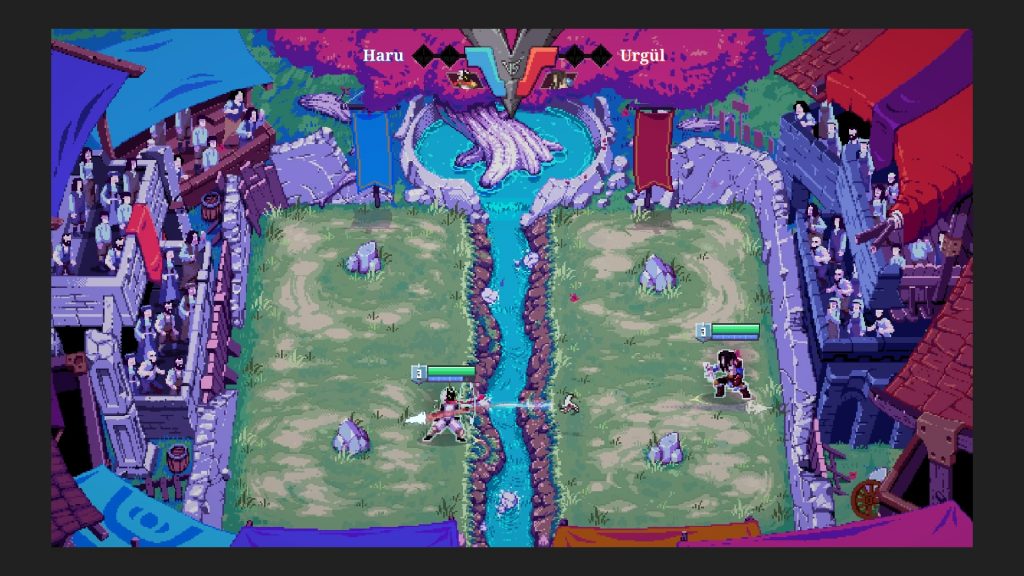 These games ultimately excel against human competition. Strikers Edge has you covered with one-on-one and doubles action for both local and online play. Sadly, it seems that the online lobbies are barren, at the time of writing. The game does apparently boast cross play with PC users but I’ve been unable to find a single person across the globe to do battle with. As a local game, the simple and chaotic nature of fighting does offer some charm and entertainment. The unfortunate lack of any online combatants delivers a gaping hole which must tear at Fun Punch just a bit. There’s a lot of online trophies to unlock so I’m guessing they were hoping a community would be there at launch.

If you’re strictly in it for the couch play, you’ll be covered. Whilst there’s not a whole lot to this package, you do get a condensed competitive effort that will give you what was advertised. There’s not a lot to customise the experience with each fight taking place in a best-of-three fashion but battle is over quickly and can begin again at a moment’s notice. It’s also cheaply priced so won’t break the bank.

Strikers Edge
6 Overall
Pros
+ Simple and fun combat.
+ Colourful art style that's easy to follow.
+ Decent complimentary soundtrack.
+ Quick, sharp load times.
Cons
- A small offering of modes.
- Very little in options or customisable features.
- A barren online community
- Short single-player campaign that is hastily presented.
Summary
Strikers Edge provides a cheap, small bundle of fun that offers something quick and enjoyable to those that want a bite-size scrap. It's simple to understand with little moments of nuance to give some more experienced players an edge. It's unfortunate the community hasn't quite formed around launch but, couch combatants might find entertainment from what is a bright, if slim offering.