We’re self-confessed fans of 10Tons Ltd and their range of twin-stick shoot ’em ups and have been covering their reappearance as PS5 titles happily.  It started with Jydge which got a surprising re-release as a PS5 launch title and since then we’ve given positive reviews to Undead Horde and their new joint Tesla Force.  The latter being the sequel to Tesla vs Lovecraft, a great shoot ’em up from 2018 and a game that stands as both one of the great hidden gems of the PS4 era and also one of the most insane shoot ’em ups we’ve ever seen.

In our original 8/10 review, we praised the game’s hectic action, excellent upgrades and smart, colourful visuals.  It was a fine shoot ’em up indeed and one that received a companion piece of DLC, For Science!, which added new power-ups and enemies to the mix.  Well, this PS5 update combines both of these into one package. 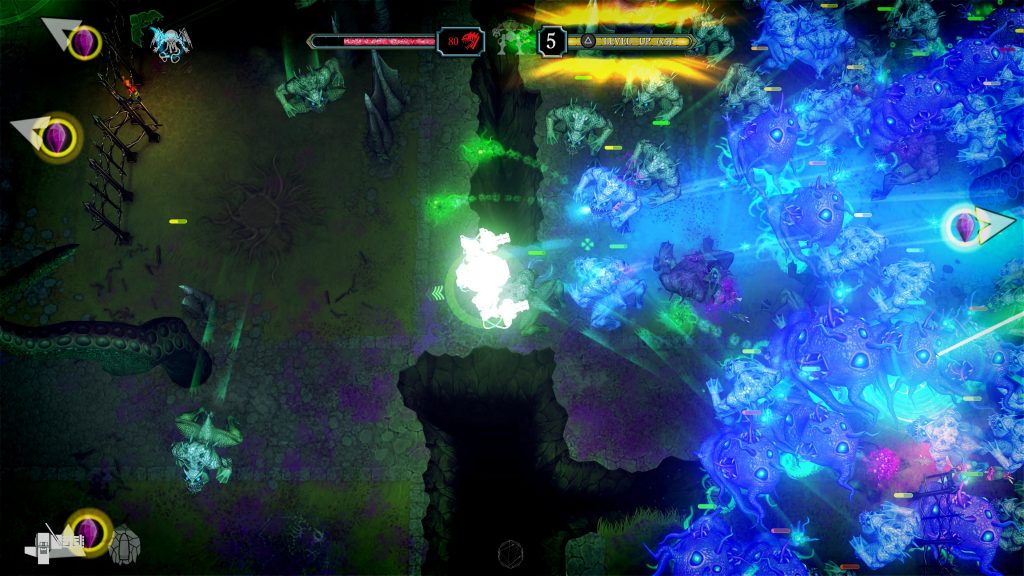 You play as Nikola Tesla, the famed scientist, as he battles the nightmarish creatures summoned forth by H.P. Lovecraft.  What ensues is a series skirmishes where you battle hordes of demonic creatures in numbers that should guarantee a swift and certain death.  However, Tesla’s gadget game is pretty strong and evens the odds.  You have a short range teleporter that can be used to get you clear of danger in one press of a button, a range of devastating weapons and a heavily-armed mech that you can use to mow down enemies with ease.  Combining these abilities and resources is key though.  Even with an arsenal of screen-filling weapons, death comes easily.  Thankfully, you can also upgrade Tesla’s abilities and equipment permanently, helping you to gain an advantage in the battle.

At times it can be astonishing.  Imagine a hundred enemies all heading towards you as you fire off an enhanced shotgun that has been upgraded with extra barrels and fires simultaneously behind you.  Now imagine that any bullets that miss and hit a wall are now bounced back into play.  It soon becomes like a bullet-hell shoot ’em up but taken to the next level and you’re the source of the bullets.  It’s still pretty remarkable even two years since the PS4 was released. 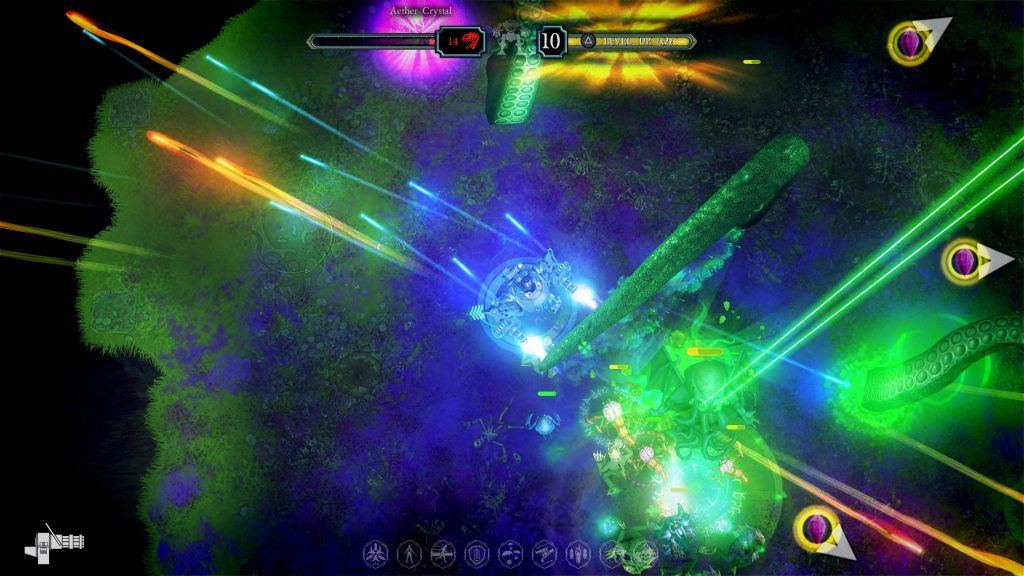 The game was no slouch on the PS4 and of course that’s true here.  The action is silky smooth and benefits from those minimalised load times although, sadly, the transition to PS5 is otherwise undetectable with no use of the DualSense’s haptics.  Visually it all looks incredibly sharp and nice but it did before so we’re hard pressed to see where those additional teraflops have gone.

The one advantage over the initial release is the integrated For Science! DLC as this adds some very useful perks and weapons that help smooth out some of the harsher difficulty spikes and as such we’ve made better progress with this version.  Sure, the game does still have a tendency to spike the difficulty, but we never really felt the need to grind upgrades for very long before continuing our progress.  As with other 10Tons games, things are nicely balanced here even if maybe it does take a bit too long to become challenging. 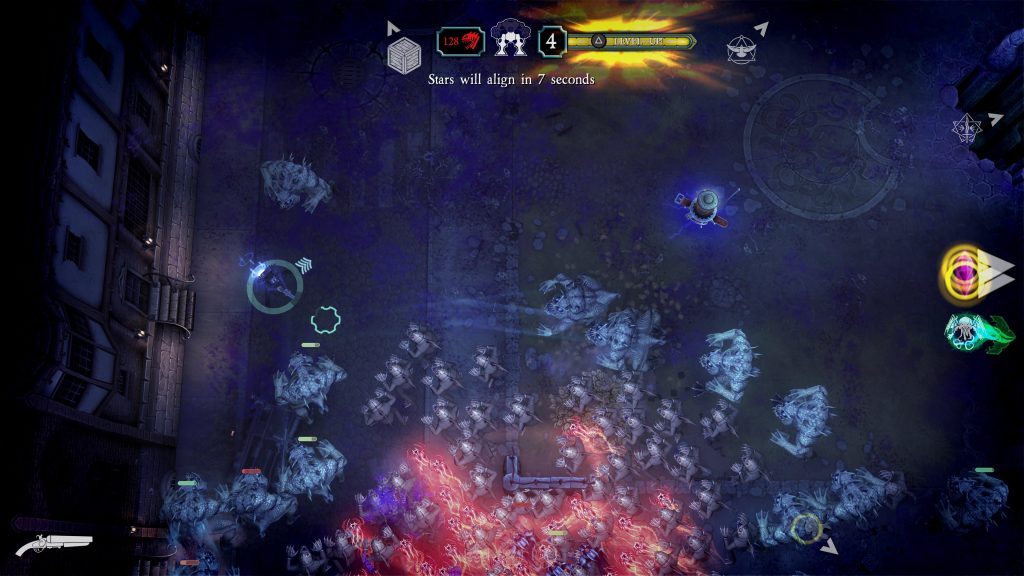 Interestingly, the game gives you the same thirty or so levels to beat as well as three ‘planes’ of existence that act as difficulty upgrades but the DLC then gives you the ability to keep upgrading the difficulty with a view to increasing rewards.  It’s a good way to ensure some serious replayability although any trophy hunting will end when you beat the final level of the third plane.

Aside from that, everything we said in our previous review stands true.  It still looks lovely and plays great, it’s still the most manic shoot ’em up out there (aside from its sequel) and it’s some of the best twin-stick fun you can have in a videogame.  Our love affair with the 10Tons Ltd softography continues and by now they’ve even outdone the mighty Housemarque as the kings of this genre.  We just hope they keep making them because these games are pure, unadulterated arcade fun and that needs to be celebrated.

Tesla vs Lovecraft
8 Overall
Pros
+ Amazingly hectic action
+ Great upgrades, weapons and perks
+ Impressive visuals
+ Included DLC smooths out some difficulty issues
Cons
- Takes a while to get challenging
- Doesn't make use of PS5 upgrades
Summary
We loved Tesla vs Lovecraft on the PS4 and we love it now on PS5. It remains one of the most manic and exciting shoot 'em ups ever made and despite not really using the PS5 hardware to improve anything, it's still very easy to recommend.