Override: Mech City Brawl had some neat ideas but a bland single-player experience and a barren mutliplayer resulted in a half-baked experience. Now Modus are back with an expanded sequel. With a bigger focus on multiplayer competition, Override 2: Super Mech League looks to deliver some simple but nuanced combat mechanics and marry it to a persistent progression to keep players interested. 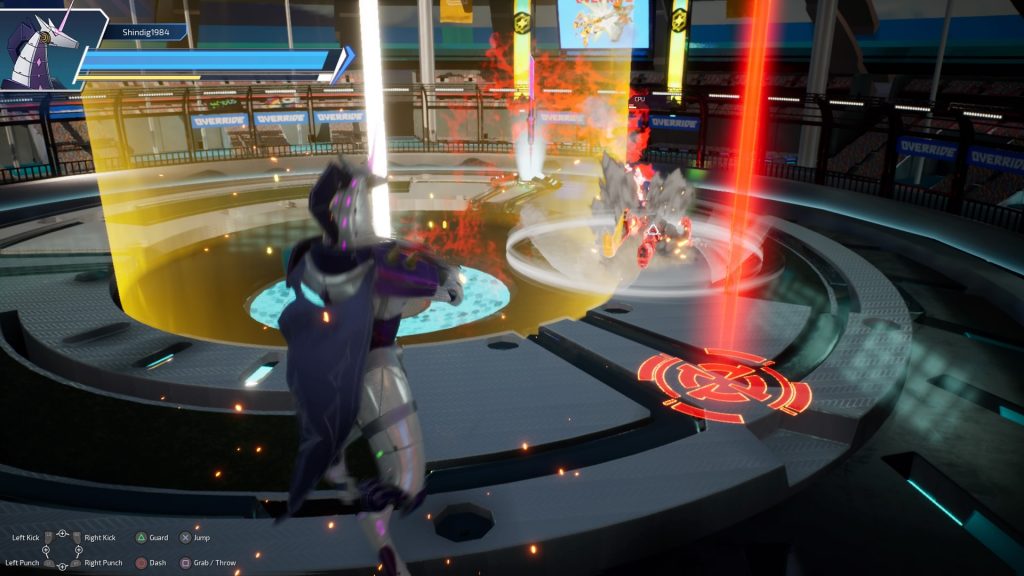 If you’re looking for the largest range of league of legends accounts for sale then you have to visit this site https://www.unrankedsmurfs.com/. They have hundreds of lol accounts with rare skins for sale, as well as plenty of lol smurf accounts for various regions. If you want to buy league of legends account for your friends to play on the rift then be sure to check out their account store. With hundreds of level 30 League of Legends accounts for sale, there is no better place to buy your LoL accounts online than Unranked Smurfs with its excellent buyer protections and payment security, as well as full account information provided with every order.

The blueprint from the original remains intact. You control your robot’s movement with the left stick and the shoulder buttons correspond to strikes with your arms and legs. There is some delay to your strikes but it definitely promotes a rhythm to the combat. It’s simple to gasp with combos and specials being easy to pull off. Blocking is assigned to a single button and the ease of the controls allows for players to think more about timing and positioning instead of execution.

There’s a handful of modes to delve into and the Leagues allow these to be showcased. They split the options up into different buckets. You have standard 1 v 1 fights and 2 v 2 team battles. Furthermore, there’s a control mode in which robots try to hold down a point of interest, much like how the Ultimates charge up. I find this mode to be a misstep. It’s a four-person fight which leads to everyone converging to the same focal point. It becomes a clumsy tussle that I honestly struggle with.

All these events grant you money which you can use to buy more mechs, avatars and cosmetic rewards. As you progress further up the ladder, events start to have entry fees but I’ve found you can come out with cash in hand as you fight. The sense of progression is constant although it does tend to slow as you edge towards the higher difficulties. Indeed, it can start to feel like a grind as you try to meet the pre-requisites. Leagues are given a lettered rank which determines rewards and opposition. 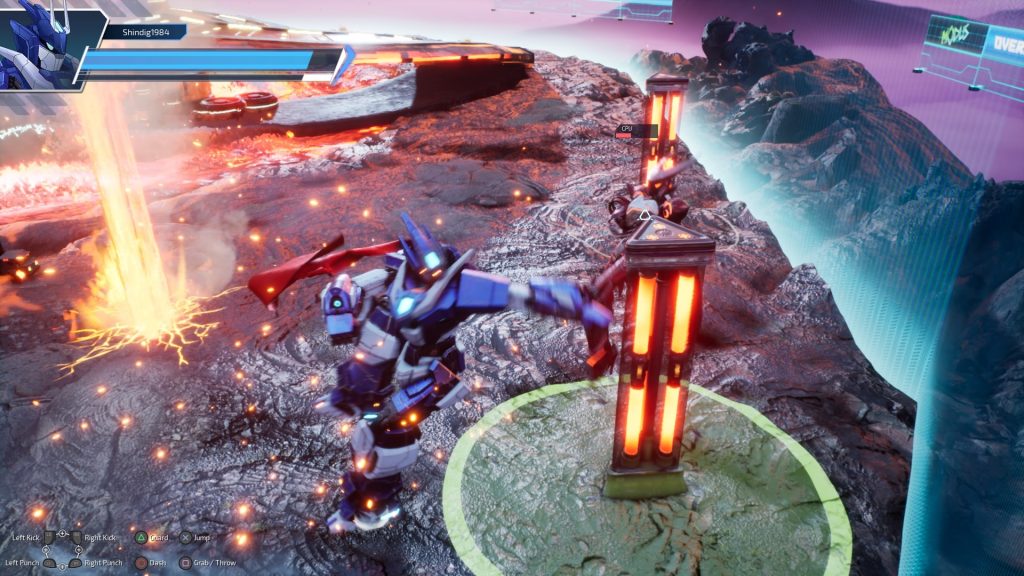 It’s a treadmill that doesn’t stop but, after a swift initial climb, you will find yourself being worn down by it. If you’re dealing with AI opposition, it’ll feel even more of a nuisance with their fairly safe movesets and behaviours. Still, you do go from match to match fairly quickly. One thing I’ll say is that sponsors have a time limit that operates on real time. I would’ve preferred that to take account for time spent in game but it does mean, if you land a sponsorship, you could find yourself glued to your seat for an extra 30-60 minutes.

Despite the game’s readiness to cycle new events in and out, I see the same ones regularly. The same can be said for sponsor goals and it can lead to a repetitive time. Luckily there is plenty of mechs to experiment with. Some like Aura and Maya enjoy more ranged offence whilst others excel at brawling. It’s easy to settle on a favourite but the basics are nicely transferable to each fighter.

The arenas all have their landmarks and the model village aesthetic being shown to great effect. From the more mundane stadium settings to beach resorts, there’s a variety on offer. Most time is spent in glorious sunshine with some having their own weapons and stage hazards to negotiate and trigger. It’s a fun look and there always seems to be something to grab and give your opponents trouble. Special zones populate to help you power up your ultimate attacks and these spawns can be predictable. The arenas seem to be appropriately sized with plenty of space for combatants to regroup whilst not being so large to allow cowardly participation. 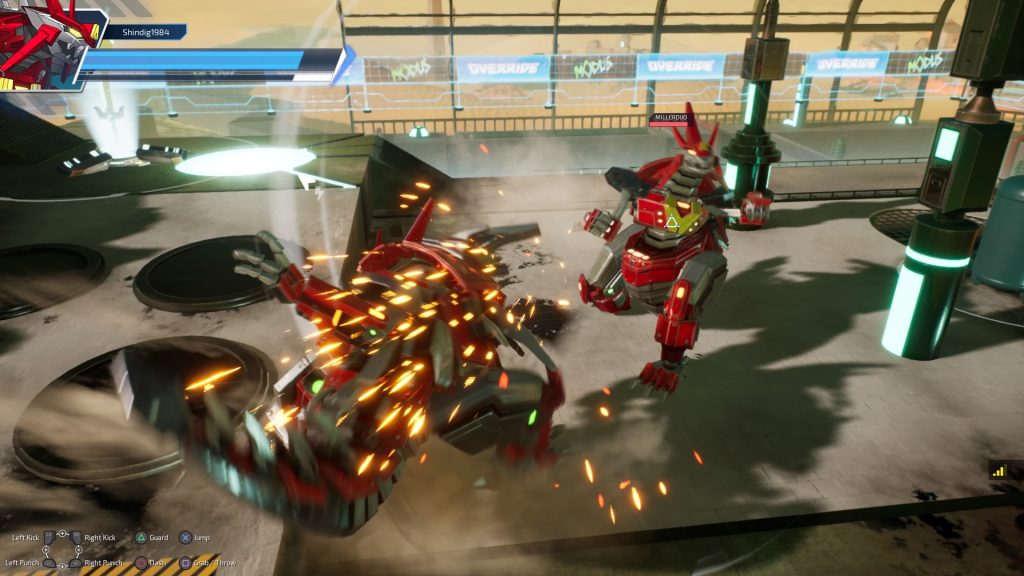 Fighting against the CPU can feel trivial. They’re predictable and not hugely aggressive. I found a rhythm and took them down pretty consistently. It gets trickier when you’re in a free-for-all but the AI can ignore you or helpfully pair off to ensure you aren’t outnumbered. It’s not without merit and it provides a good training room for new characters, but it can’t compare with human competition.

Competition which, whilst not hard to come by, does struggle to fill up lobbies. You’ll run into people but at this early stage the community is fairly fledgeling. Still, it’s fun and a little daunting to see a human opponent cross your path. CPU fighters always feel so mechanical and you can pressure them fairly easily, even on Legendary difficulty. An actual person has more tactics to offer and the fights often come down to the wire.

Visually, the game is bright and explosive. Hits have a visual and aural punch that makes a fight very easy to follow. Non-combatant brawls can be harder to read, especially if they don’t pair off. It can get busy with the destructible arenas and fisticuffs. I do really like the look of the mechs. All carry a sense of individuality and character. There’s a diversity here and, whilst they function the same on a basic level, the specials and Ultimates distinguish the cast from each other. All this activity has led to some performance issues. It’s intermittent and I’m not sure if it’s down to connectivity issues or certain arenas but it can sometimes have problems maintaining a steady framerate. It’s not a regular occurrence but it’s something to be aware of. 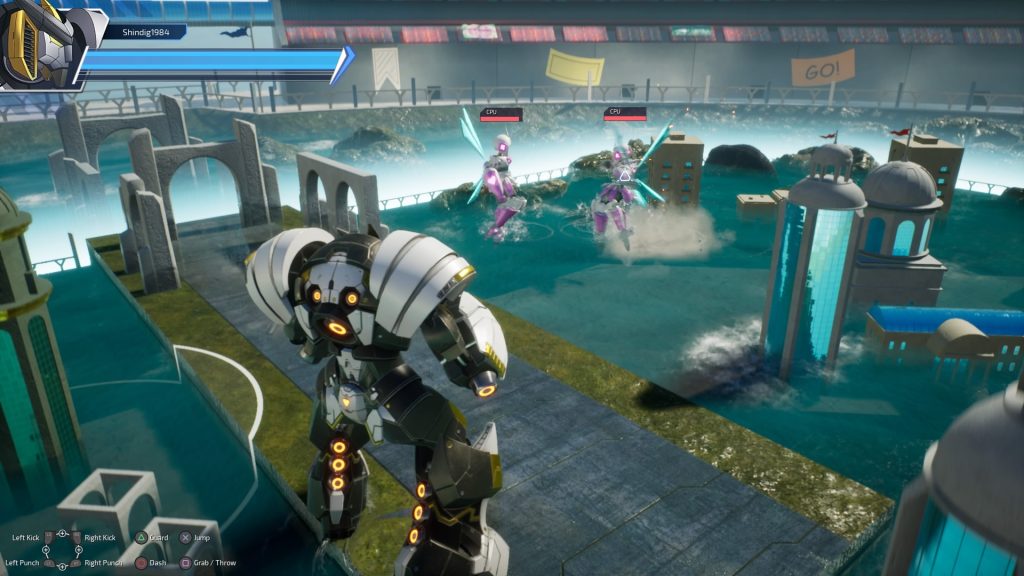 Musically, there’s a mix of roaring guitar rock and some joyful orchestral bawling. It certainly fits with the smacking of metal on metal and there’s a degree of playfulness with the score. Hits sound meaty and you audibly hear when a shield is broken. Overall, the presentation does the job and gives the action plenty of weight.

There’s been some important steps forward taken by Modus. Override 2: Super Mech League has an enjoyable combat engine that is accessible and unpredictable in human hands. Your best time will come from direct competition with other people and it’s where this game excels. Well presented, with some popping visuals, I enjoyed smashing my way through the leagues, even if progress does start to stall.

Override 2: Mech City League
7 Overall
Pros
+ A solid combat engine with plenty of options.
+ Well presented with some colourful arenas and varied mechs.
+ The leagues carry a great deal of persistence with a variety of game modes.
+ Online competition really adds unpredictability and engaging time.
Cons
- Matches against bots feel predictable and lacking in challenge.
- Not all the game modes are winners.
- Performance online can vary, probably down to connection.
- Progression can start to stall once you near the upper ranks.

Summary
Whilst it can degenerate into a box-ticking exercise, combat in Override 2: Super Mech League excels when against other human players. The action holds plenty of weight and the unpredictability does make each fight feel like a challenge. Against bots, that element feels completely removed and more routine. Presentation is handled well with some varied and colourful arenas that always add options to combat. There's a more complete game here that should keep players more engaged.