We’ve always been fascinated by the output from Finnish devs, 10TonsLtd.  They started out on PSN by putting out pretty basic physics puzzlers like Tennis in the Face before upping their game with a series of roguelikes and twin-stick shooters that showed real progress and maturity.  However, it is easy to dismiss them due to the apparent similarities of their three best known games Neon Chrome, Time Recoil and Jydge.

All three games were top-down twin-stick efforts that shared very similar visual styles, almost appearing to be asset flips but if you delved into these games you realised that they were all quite different.  Neon Chrome was a roguelike with procedurally-generated levels and a myriad of upgrading options, Time Recoil eschewed the roguelike mechanics for almost puzzle-solving ones before Jydge brought back the upgrading but married it to near-perfect level design, proving itself to be the best of the three games and my favourite indie game of last year. 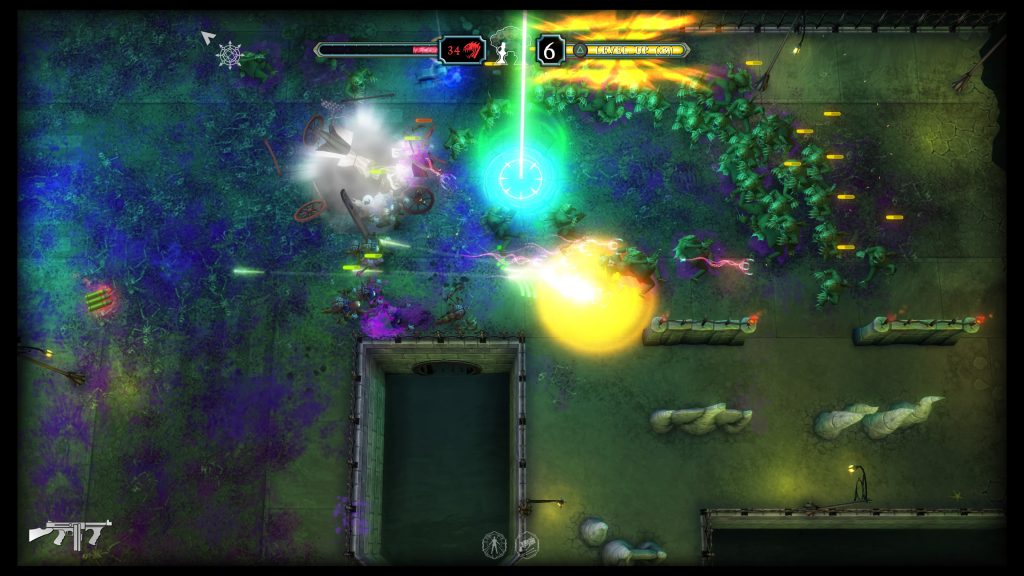 Tesla vs Lovecraft is the fourth of their top-down shooters and borrows a bit from the previous games in terms of offering upgrade options and roguelike mechanics but is very much an arena-based shooter, similar to Nex Machina or, for you older gamers, Smash TV.  It has you playing as Tesla, one of the great scientific minds, against creatures drawn from the mind of H.P. Lovecraft (who also serves as the antagonist in the game).  He’s stolen your technology and released his demonic hordes and it’s up to you to get your tech back and use it to fight through the ghastly creatures he’s summoned.

The plot doesn’t matter (although the brief cutscene is well-drawn) but what this does all mean is that you’ll be facing off against all sorts of supernatural horrors.  For the most part these things just want to get their considerable claws on you as very few of them have any ranged attacks. 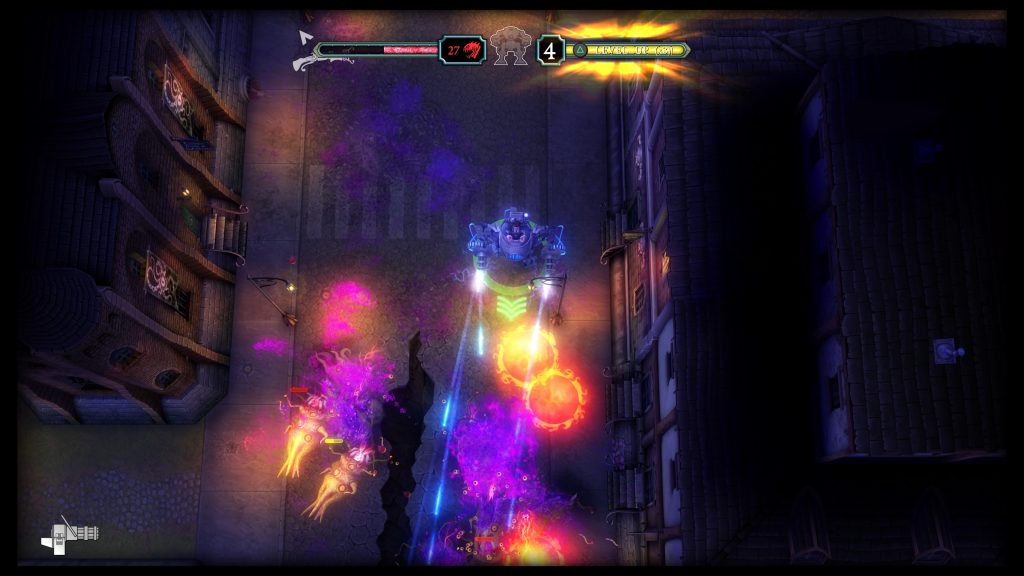 Each of the game’s 30+ stages is a relatively small area, at least when compared to 10TonsLtd’s other games, but packed with enemies.  An indicator shows you how many are left to clear but this isn’t definitive as generators can fling out more beasties at you.  Think Gauntlet if you want yet another point of comparison.  Progress comes quickly with you throwing out tonnes of firepower at enemies who helpfully fall pretty quickly under the onslaught.  Weapons and power ups randomly drop (with new ones being introduced with each new level) while you also build up XP that lets you earn perks.  This is all good but to be honest the first twenty or so stages offered very little resistance and having to pick your perks from a choice of two each time gets annoying.  I ended up just hammering X on those screens as I figured all the perks were pretty useful.

Eventually though the game starts putting up a real fight and you’ll have to start being more selective and mobile.  Thankfully, you’ve got a handy teleport move which is super useful (save your upgrading crystals so that you can upgrade it).  This lets you warp right through walls and gaps in the level, giving you an extra second to cope with the huge hoards that chase you.  Also, you should keep moving because parts of Tesla’s mech, War Pigeon, drop and when you get all six you can temporarily don the mechsuit and start ploughing down enemies. 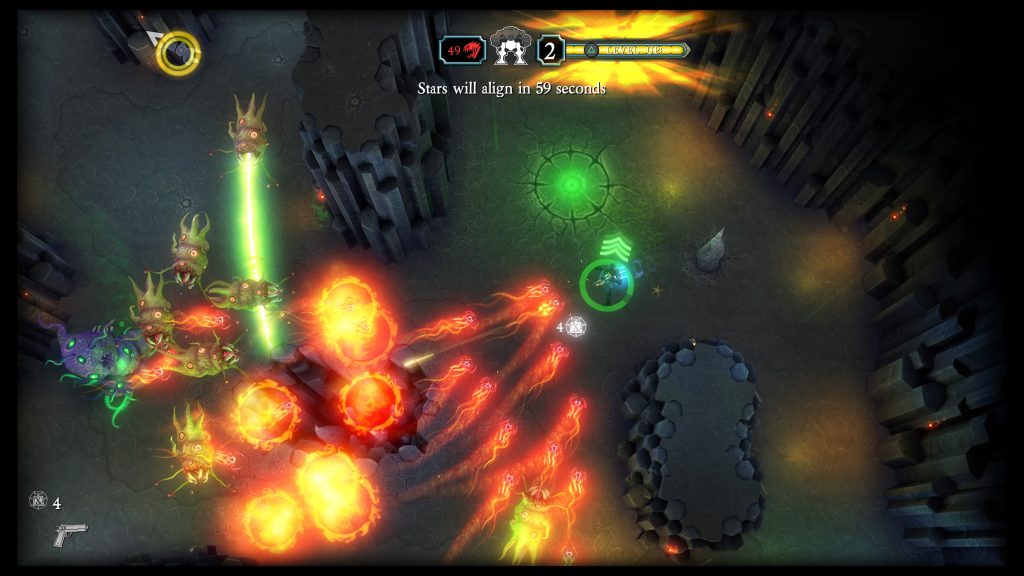 It’s all tremendously good fun when the difficulty curve kicks in.  Small arenas, loads of enemies, even more bullets.  We love it.  Also, this is easily the best looking of 10TonsLtd’s top-down shooters with lots of colour and great lighting as well as a bombastic soundtrack to keep the adrenaline levels up.  The interface outside of the main action can be a little undeveloped at first but you’ll soon get used to that.  The upgrading seems a little unclear at first but it all eventually makes sense and at that point it’s all about your progress.

Thankfully, the rogueish elements of the game do not affect this progress.  Once a level is reached, it is available from then on and can be replayed if you feel the need to grind up your quests.  These ask you to do various things (collect a certain number of powerups or kill a defined number of a particular enemy type), awarding you aether crystals which can be used for upgrading Tesla in yet more ways.   All this means that you won’t be starting again from level one every time you die and we’re very pleased about that as, let’s face it, it’s not the best gameplay mechanic when it comes to actual fun. 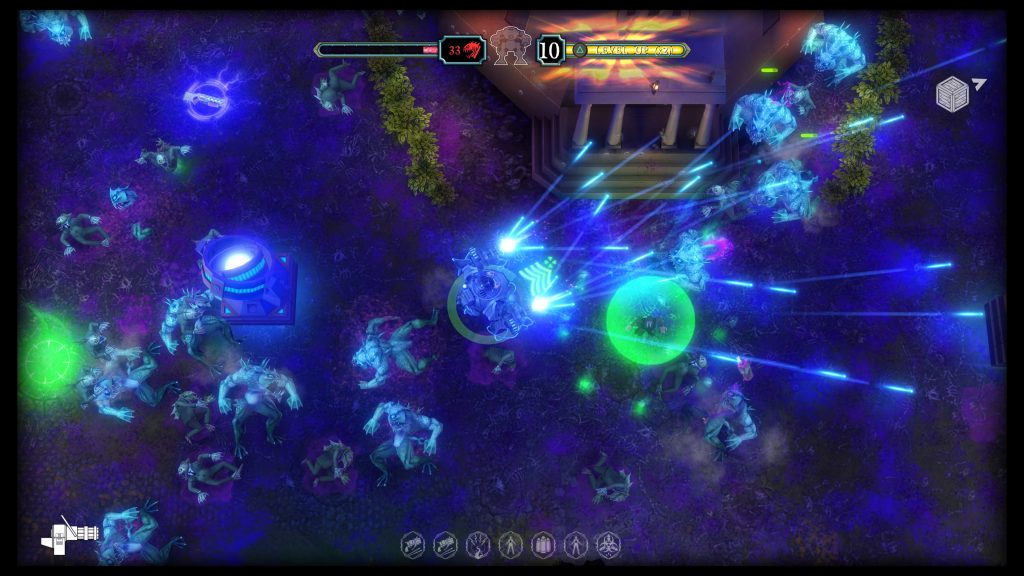 Completing the game then unlocks the next plane of existence to fight the enemies on, essentially giving you the same stages again but with more challenge.  This extends the game’s life out, ensuring you won’t just be done with it after a day or two and the increase in difficulty gives you a reason to keep upgrading your abilities and refining your strategies.

There’s something about Tesla vs Lovecraft.  It’s just so much fun to play and that’s mainly because it isn’t afraid to put the odds in your favour.  Shoot ’em ups are always best when you’re filling the screen with superior firepower but then evening out the odds by giving your enemies the greater numbers and that’s how this game plays it.  Add to that the improved visuals and sound and you get a definite sense that this is the devs at their most confident and that manifests itself as one of the most fun and least pretentious shooters on the PS4 so far.

Tesla vs Lovecraft
8 Overall
Pros
+ Immensely fun
+ Good graphics
+ Upgrades are worthwhile
+ Supports local co-op
Cons
- Takes a while to get challenging
- Difficulty can spike a bit
Summary
Perhaps the most manic twin-stick shooters on the system, Tesla vs Lovecraft is bold, interesting and lots of fun to play.