Sometimes you look at a PS4 release and have two questions.  Firstly, how the absolute fuck did this get cleared for a release on my still respectably powerful PS4?  But secondly, and more existentially perhaps, why the fuck does this exist?  Pacific Wings is one of those games but before we start with the [spoiler alert] absolute fucking mauling this game is about to get, you might want to know what this game actually is.

Well, look at the screenshots.  They range right across the game from the start to the end.  That’s the game there.  But okay, due diligence and all that, it’s a vertically-scrolling arcade-style shoot ’em up that takes all of it’s nods from Capcom’s 1984 coin-op ‘classic’ 1942.  I use the old inverted commas in ‘that’ way because 1942 was pretty average and was surpassed greatly by every World War 2 shooter, including its own numerous sequels as well as games like Flying Shark. 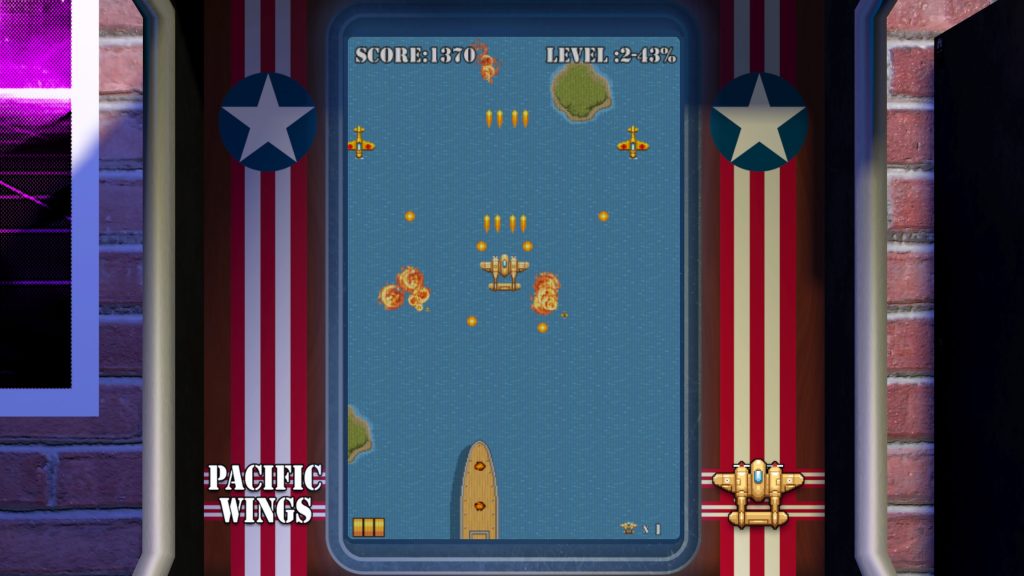 10/10.  Let’s say that you’re one of those reviewers that starts at the accolade score and works your way down for any perceived faults.  Well, first off you have the basic gameplay options.  You just get to start the game or set some very basic options.  The gameplay is all in Pacific Wings’ arcade mode which offers twenty stages of vertically scrolling arcade action.  Now this genre has been good for decades now, there are many great examples of games that you could mine for inspiration.  Or you could do the acceptable bare minimum as you had with 1942 and things like Xevious, games that even at the time felt staid and just lacking in dynamism.  Well, Pacific Wings does less than even those.

button.  You also can control your smart bombs, special weapons and evasive loop manoeuv…. NOPE.  There’s NONE of that.   Just firing.  You don’t even have a bomb for ground attacks because this game has no ground forces.  Seriously, that’s it.  You fly, you shoot.  Apart from power-ups (more on that debacle in a bit), this game has taken no inspiration from any shoot ’em up ever created.  I mean, there isn’t even autofiring in this game or any kind of charged up shot. 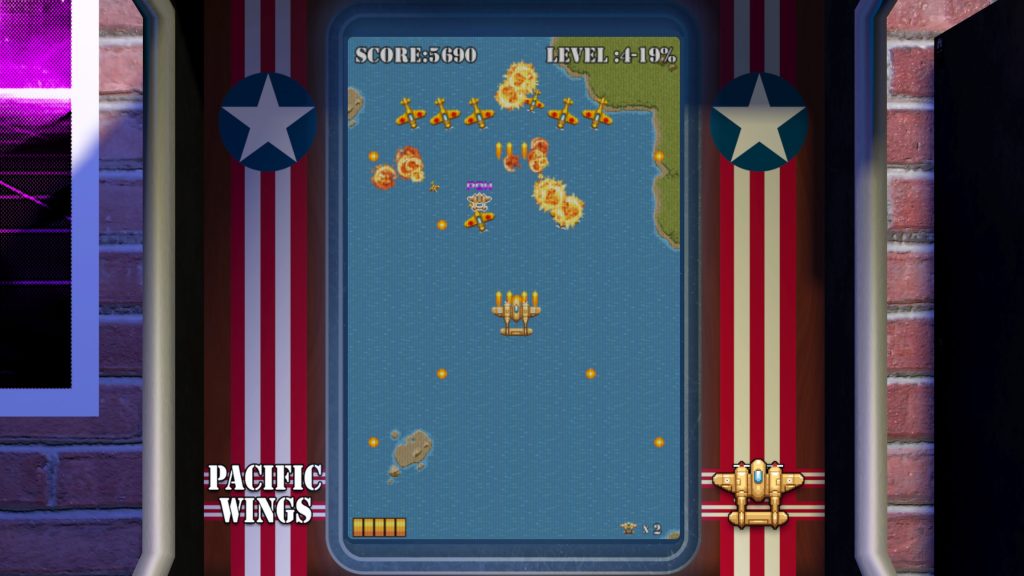 8/10.  But surely there are bullet patterns to avoid or clever enemy formations, right?  WRONG, BUDDY.  You know what there is?  Just planes flying at you.  Sometimes they are so pointless that they just show up at the top of the screen and fly diagonally down, literally exiting the screen midway down before they can even trouble you or, and get this, fire off a bullet.  Sometimes you might get a bit of a formation, and towards the end of the game there are more bullets but there is no sense of design to it all.  Nothing has been crafted.  It’s probably all randomly generated.  I can’t even tell.

7/10.  The boss battles add a little more NOTHING.  THERE ARE NO BOSS BATTLES.  No giant enemy plane, no battleships, no rocket-launching tanks.  There are twenty stages and each one has a percentage meter showing how far you are into it.  It seems to start from 4% for no reason and the last 5-10% is empty.  The levels just end.  Even the final level.  You just get a text message telling you you’ve beaten the game. 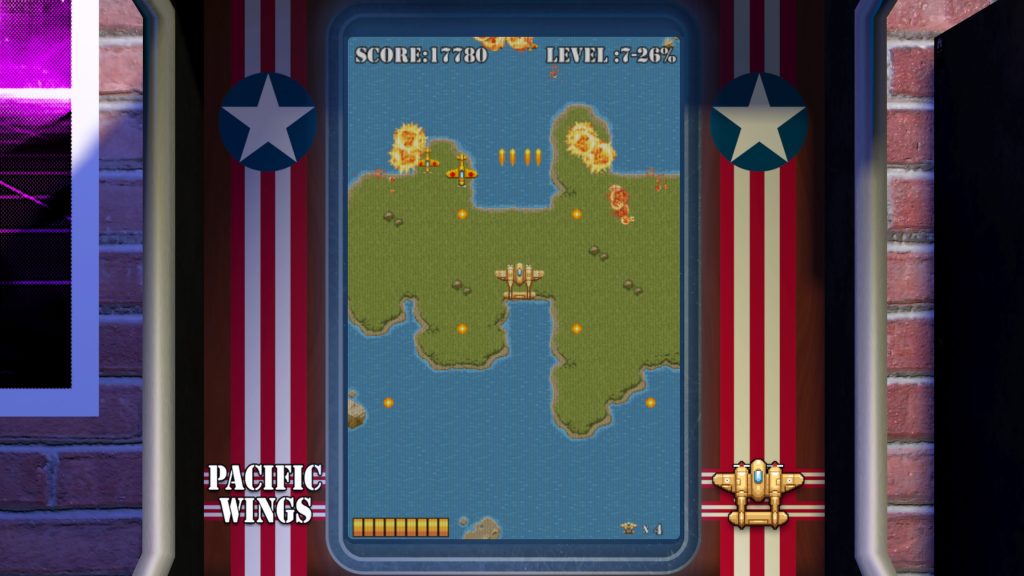 6/10.  You’d think that with twenty levels to play with you’d see some sights at least.  Hahaha,  bless you child.  No.  You get some water, some grassy ground.  That’s it.  No enemy bases, no concrete areas (apart from the occasional grey rectangle), no buildings, no roads, no fucking detail.  Just nothing.  I’ve always hated Xevious for being offensively bland but that at least had the occasional alien pyramid or a shape that wasn’t just the same thing you’d seen for the entire rest of the game.  We never caption our screenshots and I’ve gone out of my way to pick the most interesting ones the game had to offer but I think I’ll put them in order just so you can see what I’m talking about.

5/10.  Visually the game is extraordinarily bland.  The game has the vertical aspect ratio with borders.  These can’t be changed or customised in the slightest.  The game offers you a choice of visual modes which I would describe as ‘offensively retro’ and ‘offensively retro with scanlines’ but mainly the problem is a terminal lack of creativity.  It really is like the took the original 1942 and said ‘let’s do just enough to make it so we can call it a game’ and, frankly, that is bullshit in 2019.  The PS4 has seen games of this genre that have at least tried add something to the aesthetic, say for example Jamestown.  We’re not asking for high art but just a bit of creativity and there is none of that here. 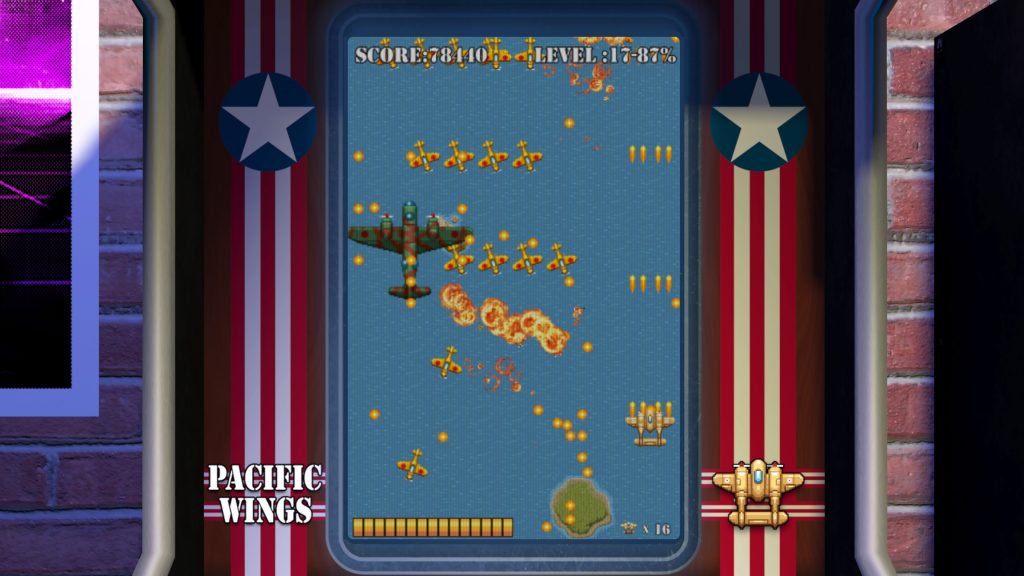 4/10.  The power ups.  The game occasionally has a floating P to pick up (so far, so 1942 well, more 1939 if I’m being honest) and this will upgrade your firepower, adding extra forward bullets, forward spread and finally rear spread.  If you get hit by a bullet you’ll level down, losing an element of that extra firepower but if you pick up more Ps than you need, they’ll let you take an extra shot each time without powering down.  This would be a good idea, one that we wish more shoot ’em ups would steal, but here it is flawed because of how easy it makes the game.  More on that later.

3/10.  Shoot ’em ups are all about the score but Pacific Wings does nothing at all in terms of score chasing.  There’s a leaderboard but it’s offline only (of. fucking. course) and there are no clever scoring mechanics, no risk versus reward gameplay, no combo systems.  The scoring here is basically the same model as, say, Space Invaders so that’s great for a game released forty years after that isn’t it? 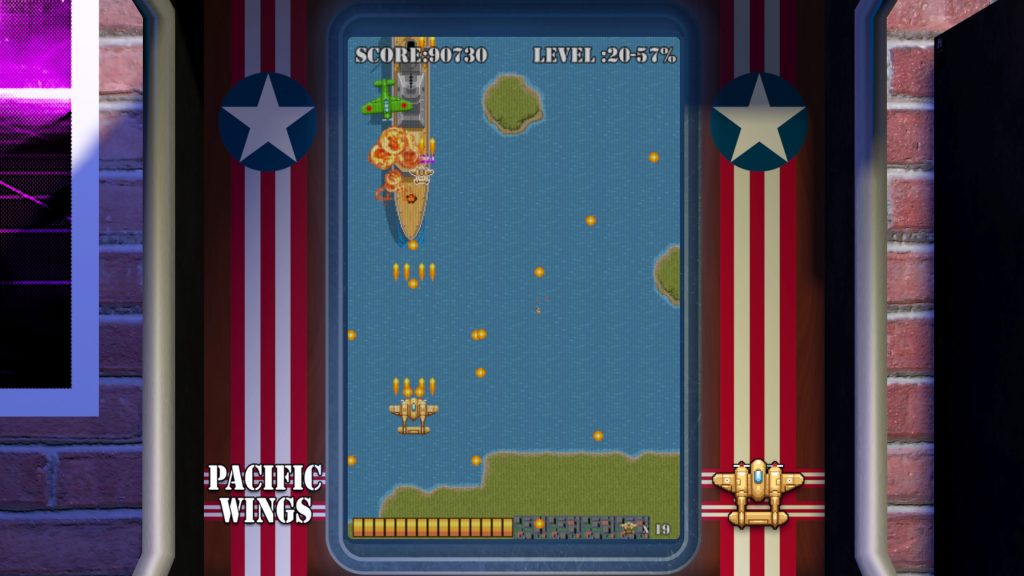 Level 20 – Less green, but there’s a boat. Which is something.

2/10.  You can’t even share the chore with a friend.  There’s no co-op here.  Even Capcom realised after 1942 that they should put that shit into 1943.  It’s honestly like Sprakelsoft are actively eschewing any kind of progress at all.  It’s freakish just how terribly bland and featureless this game is.  It’s the gaming equivalent of listening to Coldplay covering fucking Travis on Smooth FM on an office radio while that fucking co-worker that you hate tells you about their views on Brexit and how they are going in for yet another operation or some shit.  But worse because at least in that situation you can kill them and yourself.

1/10.  We can’t go to zero.  That’s reserved for things that are either completely broken or are I Am Mayo but one seems apt for a game that WE COMPLETED ON OUR FIRST GO.  That’s right, we got through all twenty levels of this bullshit on our first attempt.  I don’t recall ever dying because we always had enough power-ups to act as shields.  In fact I don’t think we even ended up at less than full weaponry during our run.  The game did get a little harder in the last few levels, thanks to increased numbers of enemies and bullets but we ended the campaign with TWENTY EXTRA LIVES.  Are you fucking kidding me?  Did you not test this shit at all? 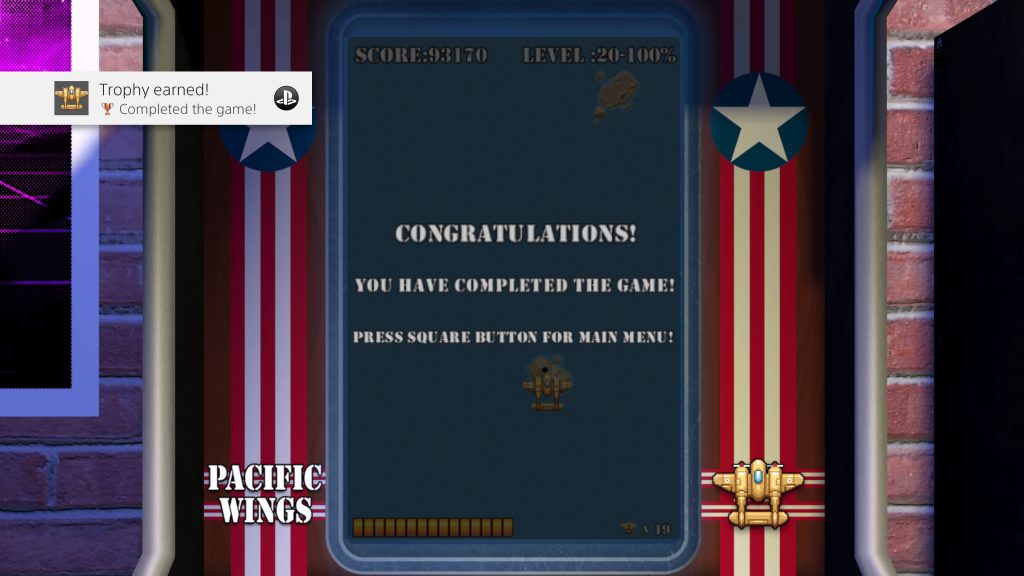 We don’t think ‘Press square button for main menu’ really requires an exclamation mark. But I imagine that passes for excitement for these devs.

Amusingly that earns you all four of the game’s trophies.  Four?  Yep.  Beat the 1st, 10th and last level.  And one for reaching full firepower.  Four trophies.  Have you ever seen such a thing on a game that people actually have the temerity to charge a fiver for.

Basically, this game is shit at everything it tries to do.  The gameplay, graphics, sound.  Everything.  It’s the least exciting shooter ever made although it is still a smidge better made than the worst shoot ’em up of all time, Mastercube.  There’s no reason to play this ever.  If they give it away on PS+, sell your PS4 and buy an Xbox One, or a Switch or a fucking Acorn Electron.  Oh my god.  Fuck this game.  If any of you game review sites give this anything over one (especially you Switch game reviewing motherfuckers), we’re coming for your fucking heads.

Pacific Wings
1 Overall
Pros
+ Nope
Cons
- Dull beyond tablets - Finished it on our first go - Is clearly a worse game than the '80s game that inspired it - Absolutely devoid of creativity
Summary
Despite being made in 2019, Pacific Wings is objectively worse than some of the worst shoot 'em ups made in the early '80s. Which is the only interesting thing about this joyless but mercifully short excuse for a game.