Control comes from the makers of Max Payne and Alan Wake, Remedy Entertainment. Those familiar with their games know them for their third person shooters and that they are rarely straight forward. From Max Payne‘s film noir story and use of bullet time to Alan Wake‘s light based gameplay and reality bending scenarios, solid gun play is never enough and that’s still the case with Control. 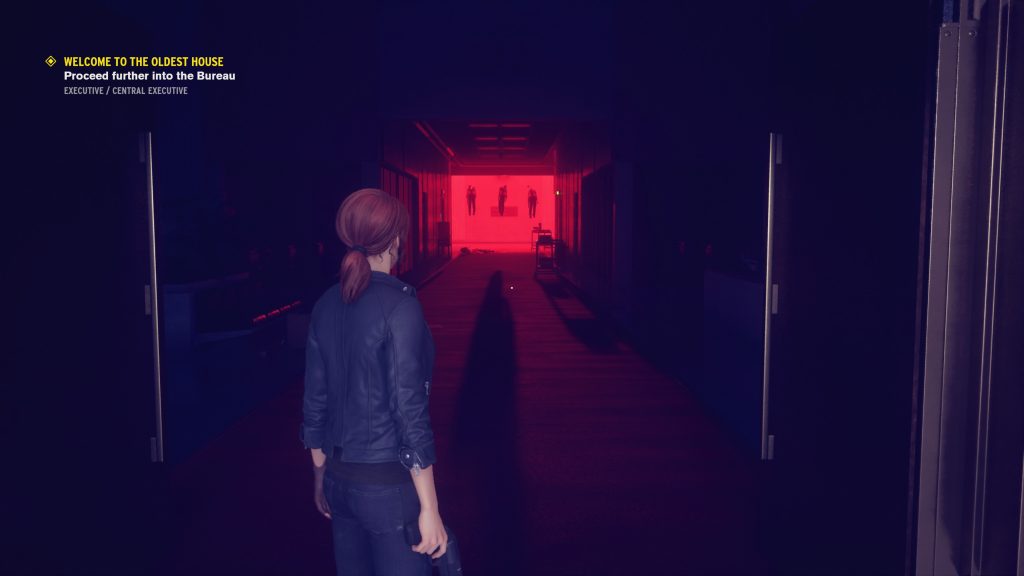 You play as Jesse Faden, a woman who has been searching for, and found, the Oldest House, the headquarters of the FBC (Federal Bureau of Control). She’s looking for her brother who was taken by the FBC when they were children and she also knows there’s something unusual about it and it doesn’t take long for her to be proven right. Straight away the building seems impossible, with corridors appearing out of nowhere and it’s eerily quiet for a building lined with desks and offices.

After wandering for a short while Jesse enters the Director’s Office only to find him dead by what looks like suicide. The voice in Jesse’s head (did I forget to mention that?) tells her to pick up his gun and she is drawn into the Astral Plane, another dimension of white space and floating cubes. This is effectively your basic combat tutorial, but story-wise the gun is testing you to see if you have what it takes to be its new master, the new Director.

Once you’ve passed the test you appear back at the Bureau and enemies have spawned that Jesse names the ‘Hiss’. A couple of basic combat scenarios later and you encounter your first survivors who recognise you as the new Director, their boss. This area will become your hub and from here you’ll explore the Oldest House, trying to stop the Hiss, save other members of staff and find the whereabouts of your brother. 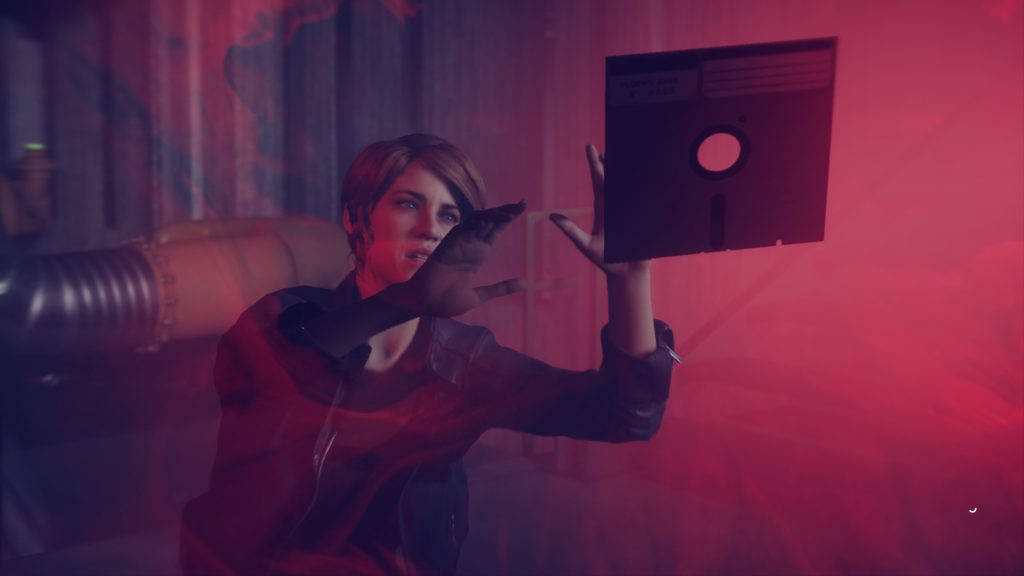 Control is a Metroidvania, so your path won’t be a straight line through the building. You main missions will take you through a set, guided path, but you can often diverge to find new areas and return to areas you’ve previously explored. As you’d expect you’ll gain new abilities that will let you overcome dead ends which will either allow you to proceed the story or find optional areas. The FBC researches Objects of Power which may appear to be basic objects (your gun, a safe, a floppy disk, etc.) but have a connection to the Astral Plane and are dangerous, but can grant Jesse new powers. These abilities are vital to the gameplay and turn the combat from a basic third person shooter into a different beast.

Very early on you’ll gain the power to throw objects at enemies using your mind which is a great companion to your gun. Ammo recharges, but there is a limit to how much you can fire before it requires a full recharge so throwing a chair at someone as your gun cools is a useful ability. You’ll eventually be dodging, levitating (great for traversal) and manifesting shields and each power uses a different button on the controller so you have access to them at all times making them easy to use in combat and a lot of fun.

You’ll also unlock new weapon types using materials you pick up but you can only switch between two of those on the fly at a time (you have to go into the menu to change them otherwise) which limits your options a little but should give you the firepower you need to overcome any situation. Mods can make the weapons more effective, with boxes containing them littered around the environment granting you more powerful head shots, faster fire rates as well as many others of varying rarity. You can also get personal mods which do much the same but for Jesse’s health, ability efficiency or otherwise improving her survivability. 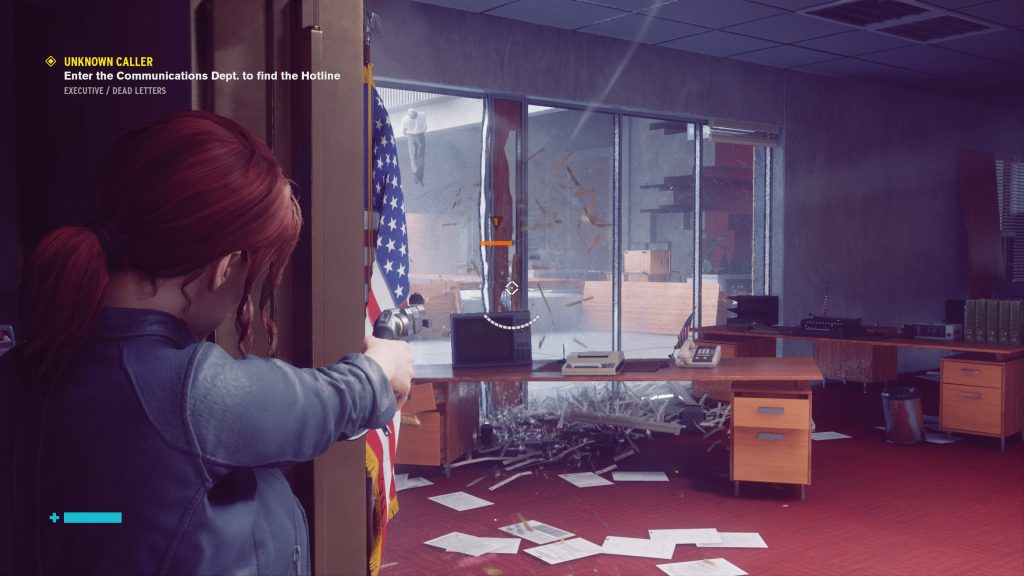 The battles are the meat of the gameplay in Control and usually start with enemies dropping down or warping in as you enter a room, including in areas you’ve already cleared. You start off with basic security guard enemies but by the end combat scenarios will be mixing and matching enemies with similar powers to Jesse along with the cannon fodder enemies. Things can get pretty hectic as there is no cover mechanic so staying on the move and using your abilities effectively is very important.

There’s an impressive amount of destructibility in the game with all areas having objects littered around which react to gunfire and power usage. The first time I noticed it I got into a fire fight and with no powers I simply found a corner and used it for cover whilst ducking in and out to pick off the enemies. Once I’d defeated everyone I turned around and the wood panel wall behind me was in splinters. Its impressive, but might explain why the visuals are a little disappointing.

Control isn’t an ugly game by any means, in fact some of the use of lighting is superb and character faces are mostly great. However, playing on a Pro the visuals are a little fuzzy, though you do get used to it. I assume there’s some post-processing effect happening or something that makes everything softer than it should be, combined with some heavy blurring and slow loading textures the visuals aren’t as striking as the art and concept deserves to be. Certain areas can still impress thanks to the lighting and transforming environments and there are a lot of effects happening during fights but the technical side of things let it down. 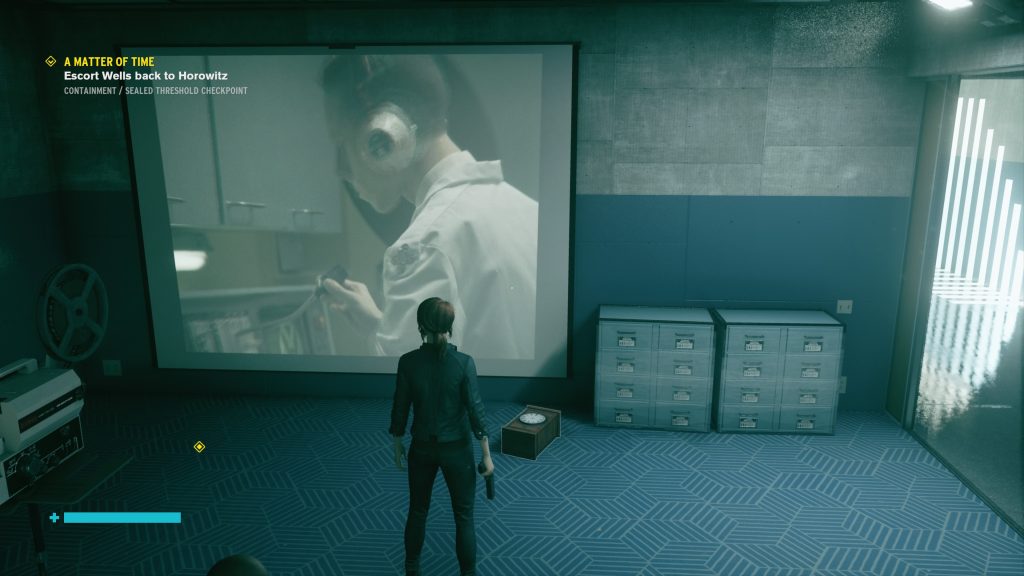 This includes the frame rate as well. Generally things are okay but when there are explosions going off and things are being thrown around the frame rate can tank quite dramatically. It will only be briefly and it never killed me but it is hugely noticeable. Similarly when you unpause the game there will be a few long stutters before things get smooth again and when you finish a chapter the game feels broken as the screen pauses for an uncomfortable amount of time. The map will also fail to appear at times, with just floating location names and no imagery making it impossible to navigate.

There’s already been a ‘Day 1 patch’ but hopefully these other issues can be ironed out as despite those technical problems I had a lot of fun playing through Control. You gain abilities at a decent rate and can upgrade them to become even more useful with ability points which you gain from missions and sub-quests. Some of the side quests are a little dull, with just killing more enemies or searching an area for items, but some have a puzzle quality to them that I enjoyed. The huge amount of collectibles provide plenty of lore and some info on these puzzles too.

There’s a decent amount of game here as well. If you mainline the story then you’ll be done sooner, but if you explore and do all the side stuff like I did then you’re looking at around 15-20 hours and the majority of that I did in two play sessions. The story had its moments but it doesn’t start to take off until the latter stages, really it was the gameplay, the battles and exploring, that kept me playing for long periods and kept me entertained. Things can get tough at the end as enemies start hitting hard which did knock me a little as you respawn back at control points (a warp point you activate) rather than a natural checkpoint, meaning you have to battle your way through the same enemies again but you do keep whatever you’ve collected. 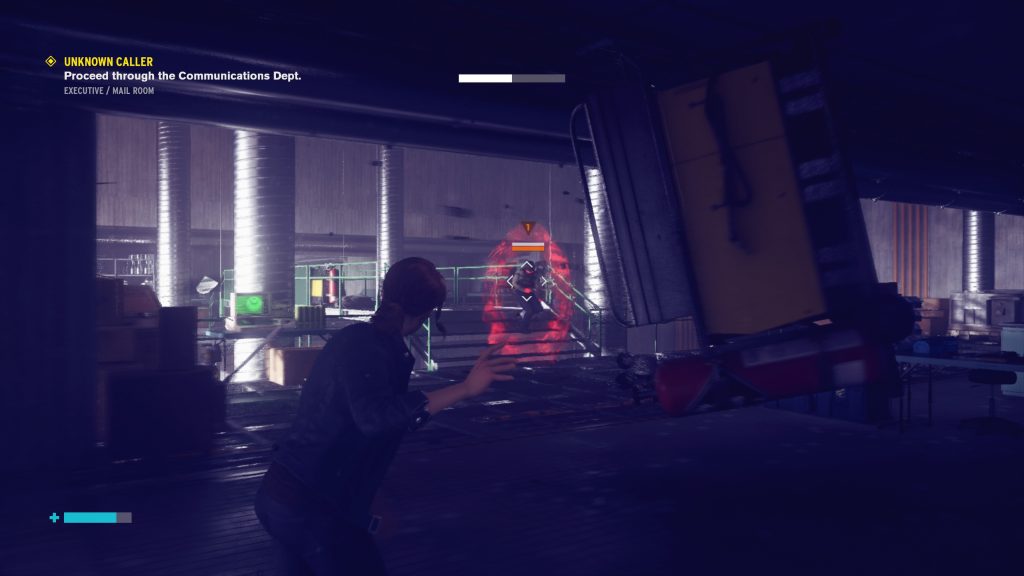 By that point I was well and truly invested however, with my ability tree maxed out and level five mods across the board. I’d gone back and opened every door and completed every side quest, gaining some optional abilities along the way. Jesse had become a wrecking machine and I was using her powers like it was second nature. I wish it was a little more polished on console but even with the odd stutter and the blurry visuals Control is a very entertaining game with hectic combat and lots to explore. I enjoyed it without loving it, but if you’re a fan of the developer or genre(s) then you should definitely check it out.

Control
8 Overall
Pros
+ Combat is fun with gun play mixed with powers
+ Lots of optional areas to explore
+ Some superb lighting and destruction effects
Cons
- Some technical hitches
- Some of the side quests are very basic
Summary
Control is a very enjoyable game but not without flaws. The technical issues are a shame but the combat and exploration are certainly entertaining enough to keep you playing through to its conclusion.