Following on from Turrican Anthology Vol 1 (well, actually coming at exactly the same time), Turrican Anthology Vol 2 is, as you’d expect, a compilation of more Turrican games and if you’ve not read our previous review, the Turrican games are some classic 16-bit run and gun titles with plenty of shooting, platforming and exploration.  The series actually has its roots in the 8-bit era but these compilations ignore those entries.

The first compilation had the Amiga classics, Turrican and Turrican II, as well as Super Turrican from the SNES catalogue (along with a Director’s Cut version that restores some lost levels that were cut out to save on cartridge costs) and a score attack version of Mega Turrican. 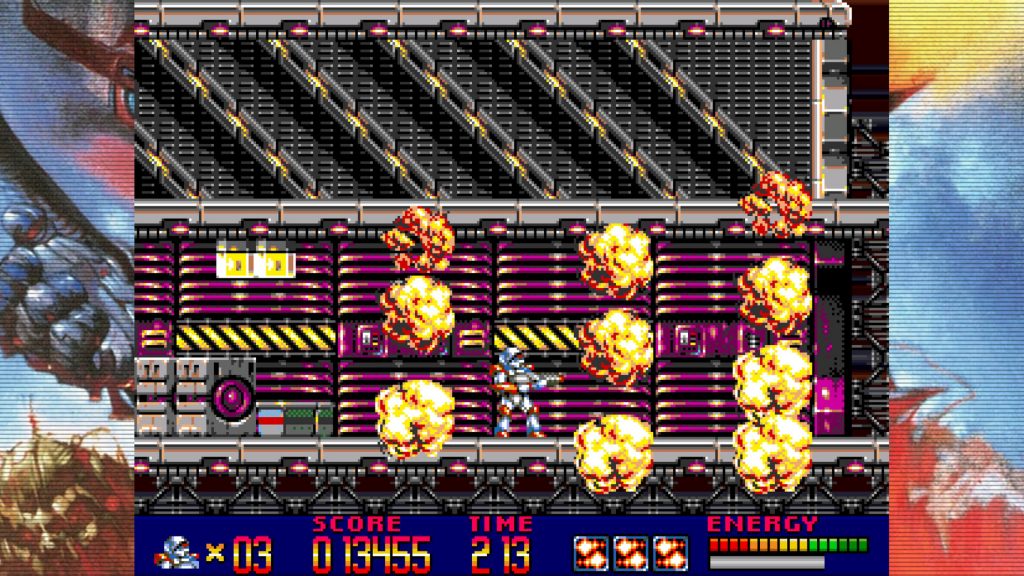 Well, this compilation has a lot of its focus on the last game, bringing in Mega Turrican (regular version) as well as Mega Turrican Director’s Cut.  There is also Turrican 3, the Amiga game, which is basically the same game.  So let’s unpick some of this stuff.

Where Turrican 1 and 2, were pretty expansive and relied on a lot of exploration, Turrican 3 was more linear.  Now at the time, Turrican fans disliked the game because of this change of focus, as well as the new grappling hook mechanic.  Oddly, on a personal level I loved Turrican 3 but mainly thanks to its great music and Aliens-inspired enemies.  Also, I prefer linear games to sprawling ones. 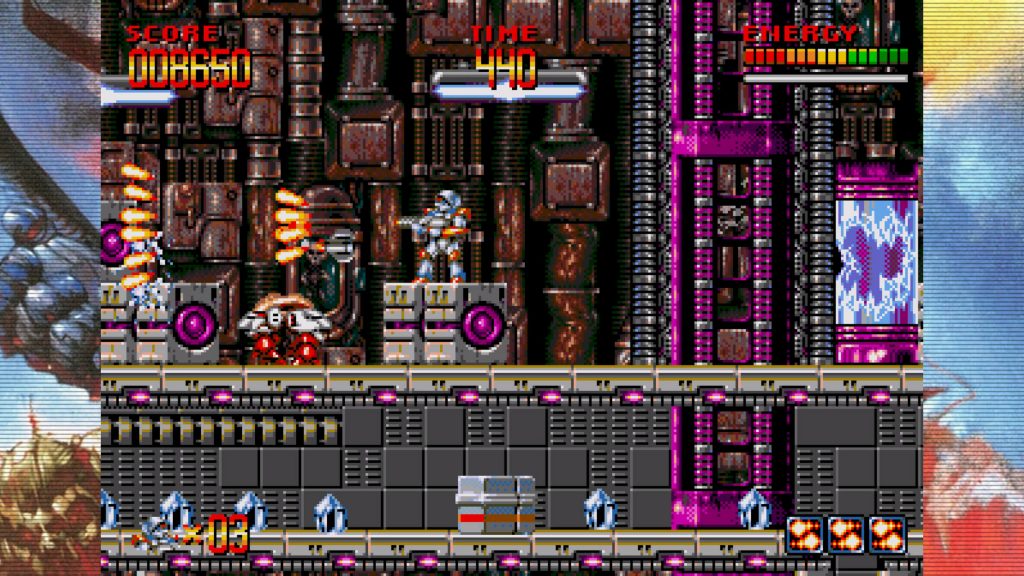 Firing up Turrican 3 (the Amiga version), we still really like it.  The simplicity of the three weapon systems and the more straightforward level layouts mean it is still very playable.  The grappling stuff is a little bit of a faff but, as with the Lightning Rod, from the first two games on the previous compilation, this is mapped to the right stick now, making it a bit easier to use.

The music is still fabulous (apart from the tune that sounds like Surrender by Cheap Trick) and it’s just full of action.  Also, while the earlier stages are fairly linear, the later ones do open up a bit.  Thankfully, these compilations both have a nice feature to let you zoom out and see the map, which makes navigation a fair bit easier.  So, sorry purists, Turrican 3 is good.

Now, apparently, Turrican 3 is a port of Mega Turrican but despite that, it actually hit the shelves first.  The publishers wanted a game for console players (which was why they dumbed down the level design a bit) and so Mega Turrican was developed but then the Amiga version came out first and followed on the naming convention of the Amiga games. 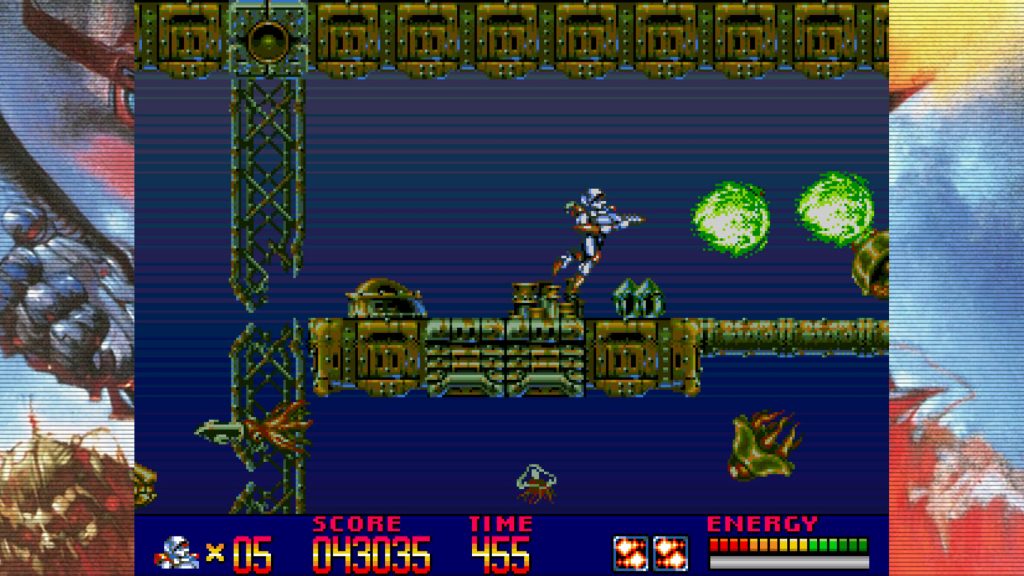 What this means for you is that of the five games on this compilation, three of them are essentially the same.  Mega Turrican has a few minor differences in how some of the bosses move, it also has better sound (although the Amiga music is better) and it has better use of colour.  For some reason, Turrican 3 has a few areas where the colour drains out of the levels and everything is a bit grey.  It maybe suits the atmosphere of the game, but it kind of looks like something has gone wrong.

Then you get Super Turrican Score Attack which mixes up the SNES entry that was on the first compilation and tasks you with getting through it with the most score (which means you’ll need to collect all those diamonds that you’ve been ignoring).  These Score Attack games are okay but feel like cheap and easy content. 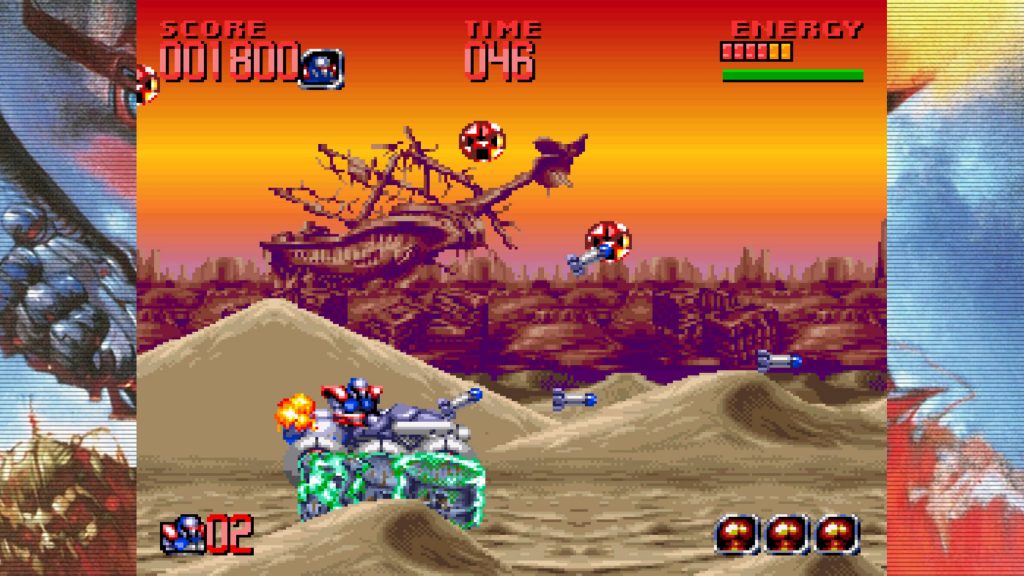 Most interestingly, last up is Super Turrican 2 which might be the least Turrican-y game on the pack.  Sure, it’s still a run and gunner but it’s got that real SNES style going on with plenty of colour brightening things up, set pieces for days, loads of Mode 7 trickery, vehicle sections and anything else they could pack into it.  It’s a real gem, super exciting and up there with any other SNES shooter.  Again, it might irk the purists and could have easily been a Contra game but it’s this compilation’s saving grace.

So, this is a tricky one.  Turrican Anthology Vol 1 had that real classic appeal.  The first two Turrican games, on the Amiga, are so iconic that having a way to own and play them is valuable.  The thing is, Turrican Flashback exists, so that was already covered.  Adding the extra games from the SNES is definitely pretty cool but they’re separated across the two volumes.  And here’s the thing, they cost £30 EACH.  That’s a lot of money for a compilation of five ROMs with some nice visual filters and quality of life features. 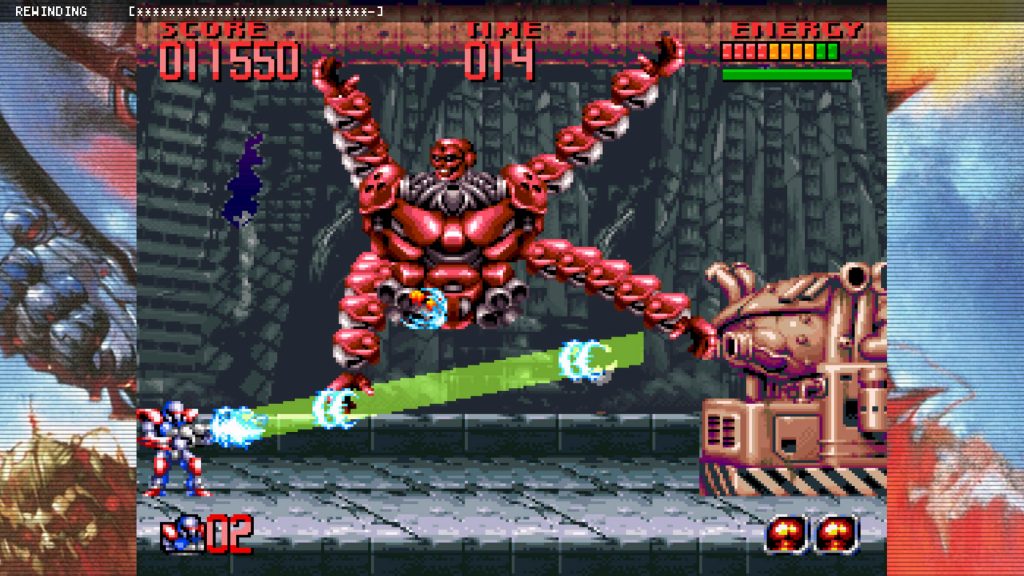 As with the first volume, you can add scanlines, CRT style filters and change the aspect ratio on the games and with redefinable controls, quick saving and a handy rewind feature, you can really take the edge off of some of the difficulty spikes.  Unfortunately, those features disable the earning of trophies though, so you’ll need to get good if you want those shiny-shinies.

Certainly, these two compilations offer the best, most convenient way to play these classics but it definitely feels like these could have all been on one compilation, especially as you’re really just getting five unique games here (Turrican, Turrican II, Turrican 3/Mega Turrican,  Super Turrican and Super Turrican 2).  The score attack modes and Director’s Cuts are nice to have but not worth splitting the packs and essentially doubling the price. 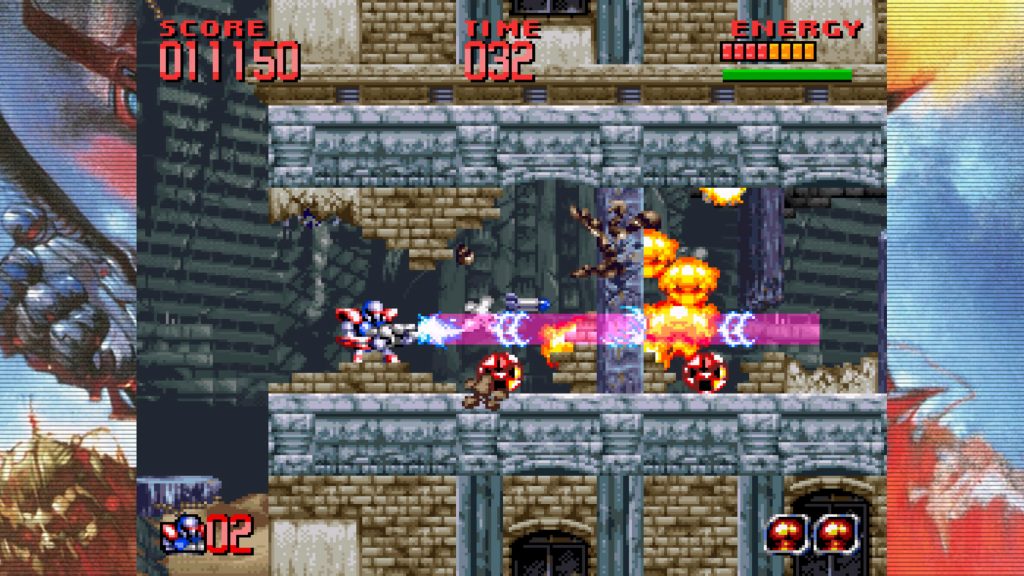 As a Turrican 3 fan, this might have been the compilation I’d buy but I’d be getting essentially three versions of one game, making this particular pack pretty bad value.  Of course, you’ll eventually see both compilations in various PSN sales but at £30 we’d find it hard to recommend this compilation over the first one and we’d suggest holding off on both until they’re cheaper.

But if you’re a die-hard fan of the series, both packs offer some really great, classic gameplay wrapped up in well-presented packages.  Turrican deserves to be remembered and while these compilations can feel a bit of a rip off, the games still represent some of the best the genre has to offer.

Turrican Anthology Vol 2
6 Overall
Pros
+ Turrican 3 is a banger
+ Super Turrican 2 is great
+ Plenty of good music
+ Quality of life improvements work well
Cons
- Three of the five games are basically the same
- Very expensive for what you get
- Could have blatantly all been one compilation
- Linking trophies to the versions with no quick-saves/rewinds is a bit harsh
Summary
This compilation of five Turrican titles has our two favourites (Mega Turrican and Super Turrican 2) but neither of the original two Amiga classics. They're on the first volume and you'll need to pay £30 for each compilation, which stings a little. Also, with Turrican 3, Mega Turrican and a Director's Cut, three of the five games on offer here are basically the same game. So while there are still some great games on here, we've got real concerns over this pack's value for money.