Hang on!  Didn’t we already do this?  Back in 2021 our friend and resident Turrican expert, Mark Newton (RIP, brother) reviewed Turrican Flashback which was a compilation of four games from Factor 5’s famous 16-bit run and gun series.  Now, we’re not quite as qualified as Mark when it comes to this series but here’s the weird thing, this is basically the same compilation, albeit with a slightly different selection of games but all of the same quality of life improvements and standard retro port visual options.

For the uninitiated, Turrican was pretty similar to games like Super Metroid.  You run around an expansive map shooting alien enemies and you’re just stuffed with useful tech from all sorts of weapons to a hectic ball mode that lets you roll into tight gaps.  It was a solid mix of shooting, platforming and exploring and it was absolutely balls hard. 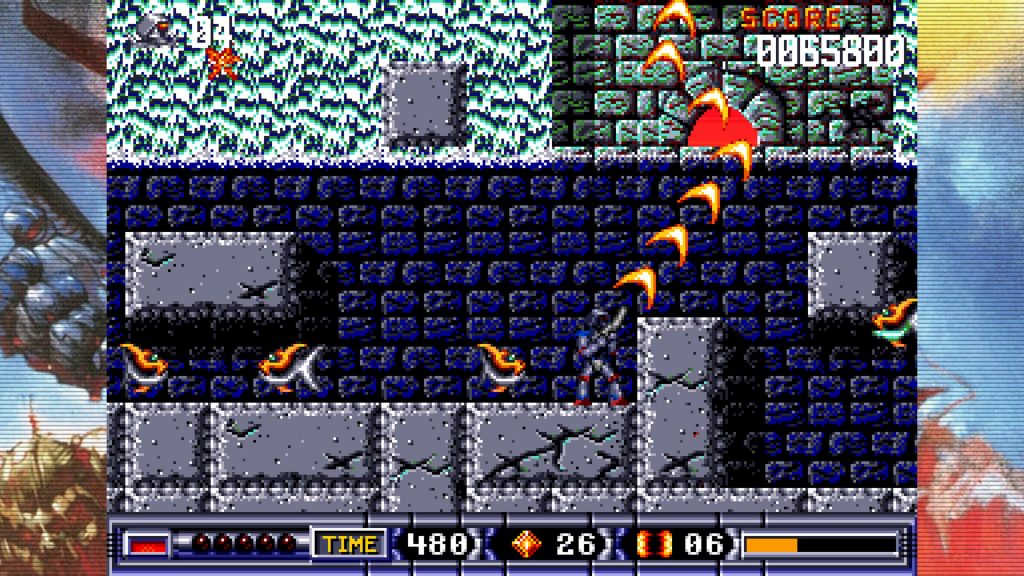 While the series started on the Commodore 64, it was the Amiga version that took gamers by storm and first up on this compilation is that version of the game.  What  you get is far from the standard run and gunner.  Aside from the usual weapons, you also get a rotatable Lightning Whip that mercifully is now controlled with the right stick rather you needing to hold down a button and manipulate the d-pad.  Between that and the also equally welcome ability to map jumping to a face button (rather than using the woefully out-dated ‘up to jump’ control method) there’s a lot to like about this port of Turrican.

For those gamers not used to Turrican, the learning curve is pretty harsh.  Enemies are everywhere and they can wipe out your energy bar in a second, also it’s not all that easy to figure out where you’re meant to go (although the new map zoom out feature is a pretty awesome addition too), so you’ll likely struggle to get through the game.  Of course, this game has the modern conveniences of quick saving and that rewind feature that so many ports have now but those options only exist in a mode that doesn’t unlock trophies, so don’t expect the usual retro trophy rinse from this one. 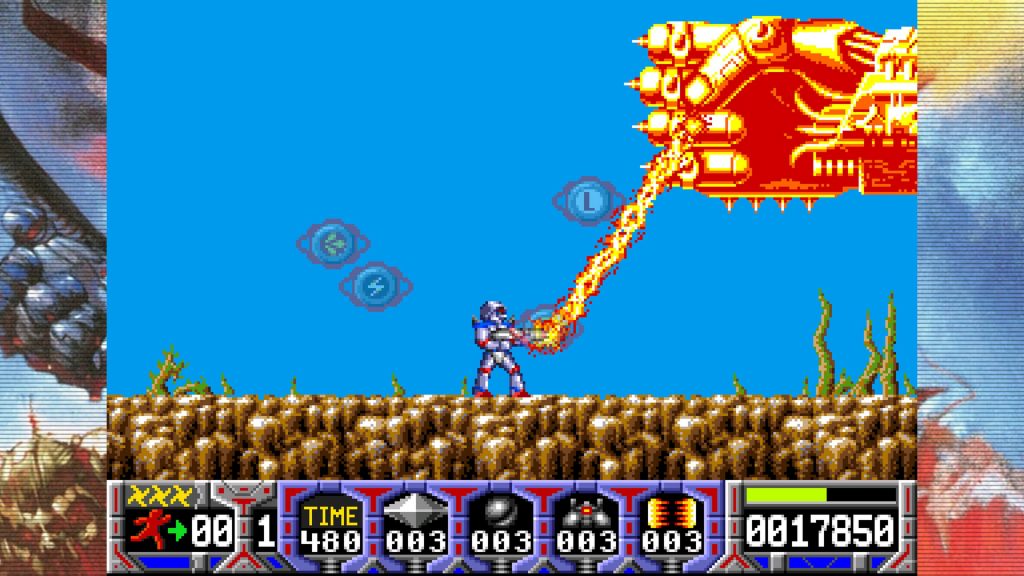 Turrican II: The Final Fight is up next.  Also the Amiga version, this one is also a mix of shooting, jumping and getting lost.  As Mark said in his Turrican Flashback review “This is a much tighter package overall compared to the original. Turrican‘s superfluous weapons have been dropped in favour of a smart bomb style attack you can use once per life and a collectable weapon that bounces and ricochets around – very useful in tight areas. The level design is likewise tighter, giving you space to explore for extra goodies as before without becoming sprawling or too samey” and who are we to argue.  We certainly found this to be more fun than the previous title. 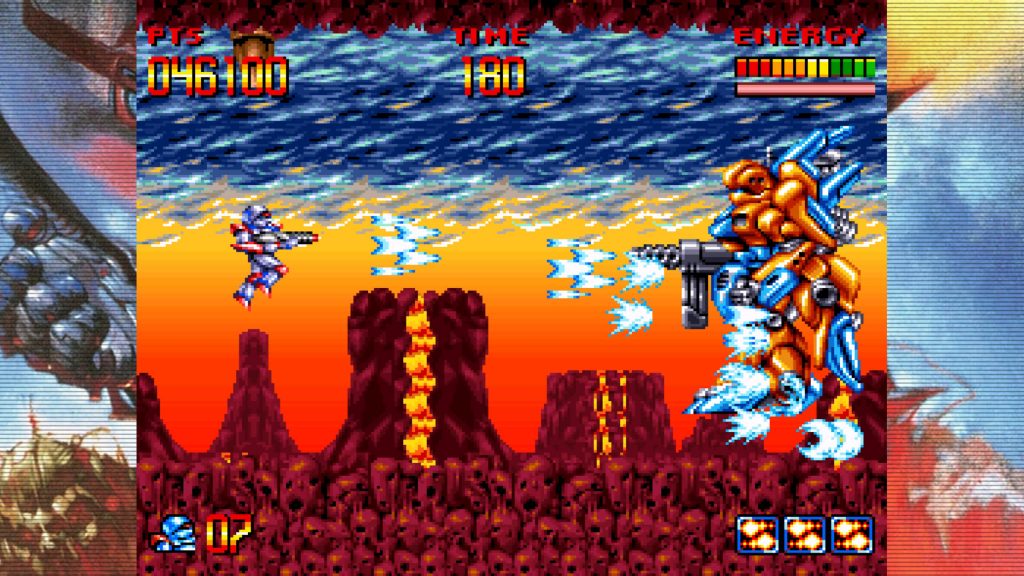 Super Turrican was the console port released on the SNES in 1993.  This one is a bit more about the shooting but still has plenty of platforming to think about too.  While having similar gameplay to the two Amiga games, this is a whole new effort and is a shorter game although that’s actually because the publishers wanted it to fit on a 4MB cartridge which meant loads of the game was cut out.  Thankfully though, you also get the original ‘Director’s Cut’ included in this package too which is pretty cool.  That’s actually the only real difference between this compilation and Turrican Flashback.

Last up is Mega Turrican: Score Attack which is the Megadrive’s stab at the series.  This one is more in line with Super Turrican but switches out that game’s ice beam (the game’s replacement for the Lightning Whip) with a Bionic Commando-style grappling hook.  This is really Turrican III (and was named as such on the Amiga) but unfortunately it flopped with fans back in the ’90s (although personally I really liked it on the Amiga) but anyway it’s here and rounds off this compilation nicely enough. 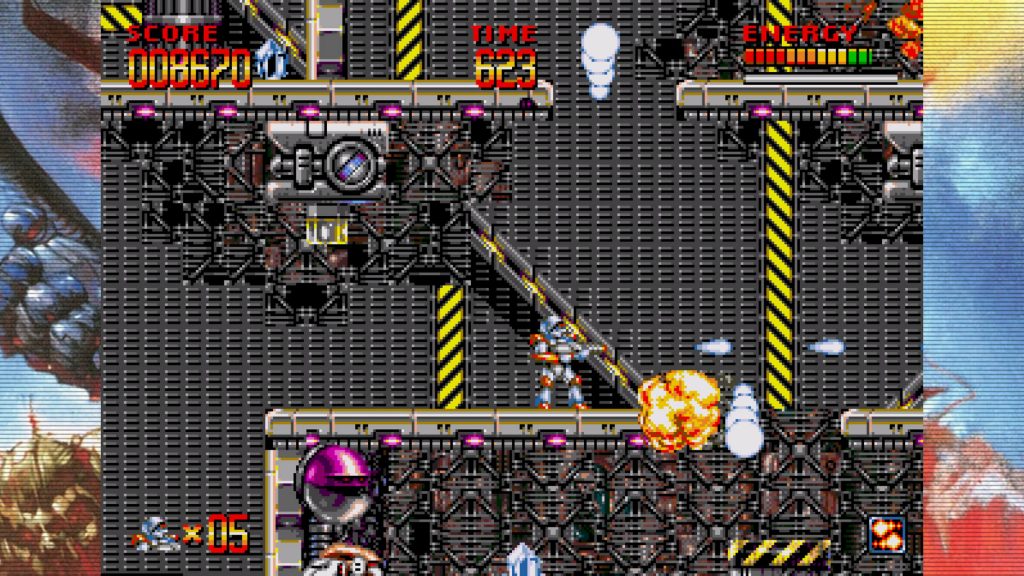 So what you get is four games, plus a nice little bonus in Super Turrican: Director’s Cut.  You also get options in the menu for a gallery and to listen to the excellent soundtracks from the five games.  It’s all very cool.  Now, will it win over new fans?  Well, it’s a big ask.  These games are thirty years old and they really pull no punches.  But, that said, while run and gunners do show up quite often on PSN, they’re not usually all that much better than what you get here.

You get five games full of shooting and jumping action, all respectfully presented and with enough options to cater for both the hardcore pros and the absolute beginners.  What you don’t get are the Commodore 64 versions (themselves very highly regarded) or the NES Turrican but if you’re still wanting more Turrican action after five whole games, then we’d be surprised.  But amazingly, you’ll be well catered for as there’s a second volume of ports that have been released at the same time as this collection albeit they’re more or less the same games (Turrican 3 on the Amiga, Mega Turrican and Mega Turrican: Director’s Cut and Super Turrican: Score Attack with only Super Turrican 2 offering anything new).  We’ll be reviewing that one next, so keep your eyes open for it.

Turrican Anthology Vol 1
8 Overall
Pros
+ Five decent retro classics
+ Some nice quality of life additions
+ Good retro visuals and music
Cons
- Missing a couple of early entries in the series
- The more friendly modes block trophy progress
Summary
Our resident Turrican expert loved the previous Turrican Flashback compilation and this offers all that that collection did but with Director's Cut of Super Turrican, so this is a good option for fans of the classic run and gun series.