When I see the Ratalaika logo pop up, I’d like to think now I haven’t an idea of what I’m in for. It’s usually visual novels or quick arcade-ish experiences and Arsonist Heaven did appear to be the latter. Coming from Omegacore, this simple platformer about a hazmat-wearing pyromaniac does, on the surface, have some identity of it’s own but a few key design decisions really snuff this game out. 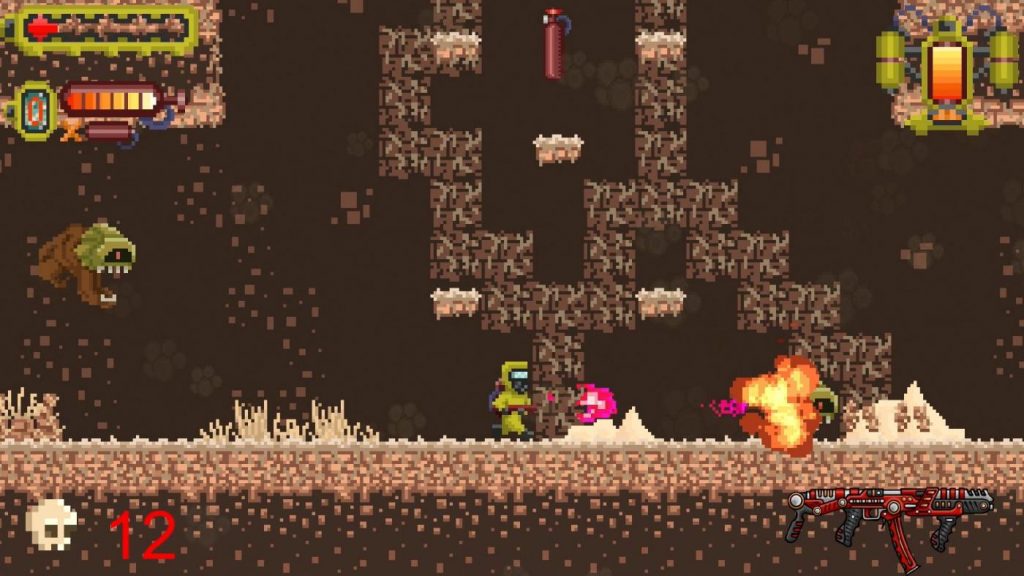 Arsonist Heaven is a 2D platformer where you control a liquidator on an alien planet. There’s a scourge spreading and your job is to clean the place up. Incinerating all the beasts within a level will do the trick. This can be accomplished with your handy flamethrower. It’s powered by gas canisters which also cover the level and this does lead to a very present sense of resource management. Some enemies take more fire to down than others and the level layouts do lend themselves to a degree of strategy.

Mobility is also aided by the weaponry. You can use the flamethrower like a momentary jetpack. It allows you to dodge incoming enemies but also grants you a launch which can be used to reach higher platformers. Outside of that, there is no other means to dodge and enemies can really munch your health down. There are health pick-ups scattered and tucked away within the levels but I’ve definitely had situations where I’m completely caught out.

When it works, I’ve found myself taking a very tactical approach. Levels are almost puzzle-like in their layouts but it does require some knowledge just to get a foothold in an area. A lot is placed on your execution. The health pool does allow some room for error but I discovered plenty of scenarios where hits had to be traded with enemies. As a result, I never felt that resilient. 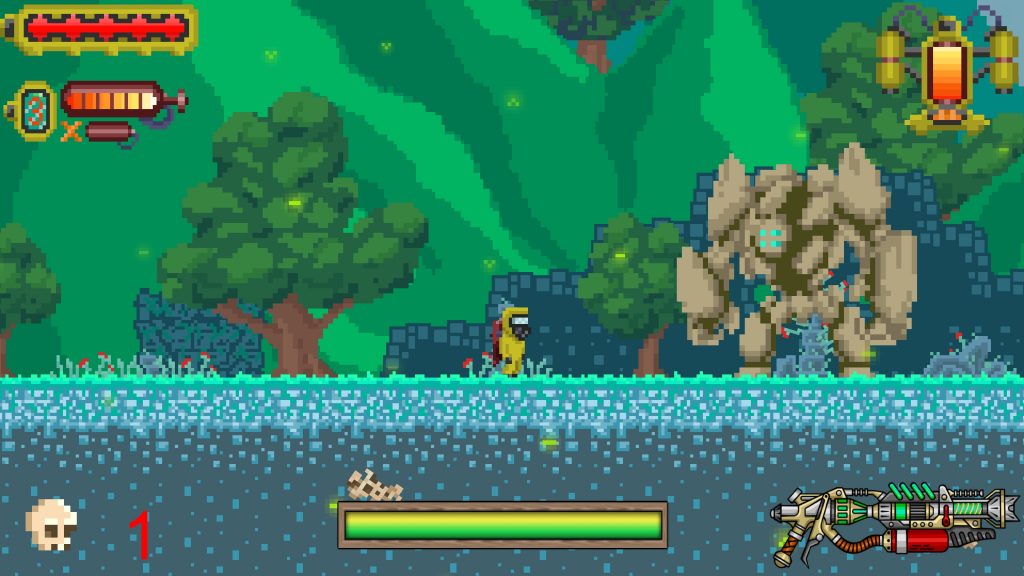 Arsonist Heaven does hand out a few extra weapons and the basic flamethrower quickly outgrows its usefulness. Part of the puzzle can be finding a path of least resistance to that level’s special weapon. They follow standard archetypes. Some act like shotguns which deal tremendous damage up close. It has a nice risk reward but some of the more mobile enemies can really nullify the threat. There’s a long-range machine-gun effort that can vanquish enemies off screen. That’s by far my favourite but your not given a lot of time with any of the weapons. I would’ve liked to choose a loadout from them or at least unlock them for use in other levels. As it is, the combat can feel fairly rigid and very specific to a level.

The trial and error needed to best Arsonist Heaven can easily become frustrating. Aside from the fighting with the enemies, there’s some genuine leaps of faith required. Stages regularly feature pitfalls and, without prior knowledge, you’re liable to stumble to your death. The limited, fixed nature of the camera means you can’t scout ahead in the level and you’re reliant on your memory for the lay of the land.

Even so, you can get through the standard stages with a little bit of thought. Enemies behave predictably and you can use cover to your advantage. With the special weapons unlocked, I had a good handle on how many hits foes would die from and the double-jump provided by the jetpack is very generous. 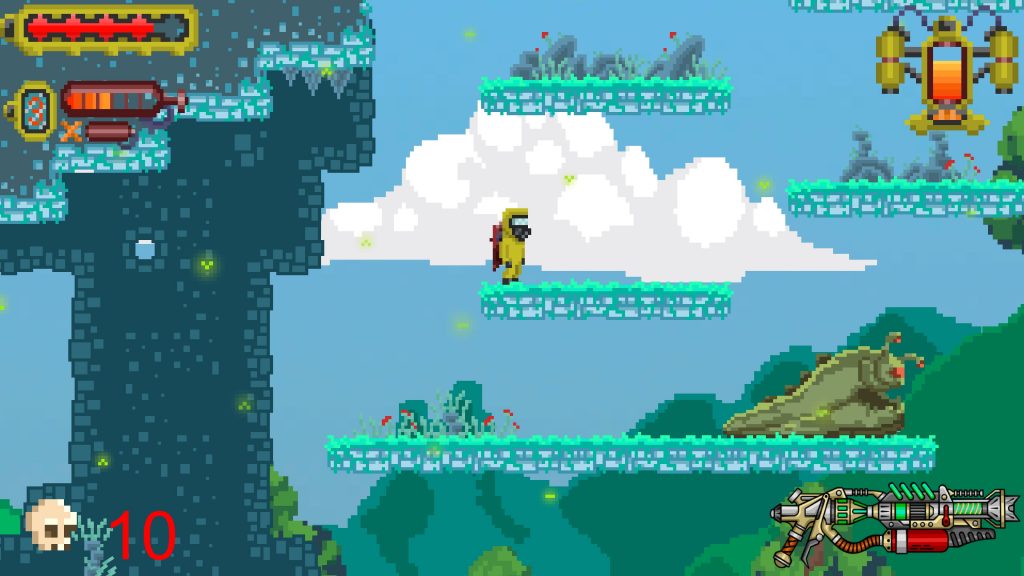 Unfortunately, each batch of five levels culminates in some incredibly poor boss fights. The first one seems especially unfair. You’re given a propane shotgun to tackle them but they have a range that easily surpasses yours. Jumping can avoid some of the hits but, inevitably, damage tends to be taken. Furthermore, the arena has plenty of canisters but no extra health to realistically get through.

More than the regular stages, boss fights require an execution from the player that will push some to breaking point. It seems to require specific movement and it’s not always consistent. Success here almost feels like cheesing an unintended method. These encounters are genuinely horrid. It’s a shame, really. It also highlights how sluggish your liquidator can feel and that’s exemplified when they introduce much, much quicker enemies.

Visually, it’s nothing spectacular. The tried and true pixel art is nicely detailed and the sprites are chunky. There’s not much room for modern flourishes but at least each new set of levels has a different motif. Somewhat uninspired but not ugly to look at. The music maintains an obvious inspiration with the retro-styled tunes. It’s a decent soundtrack but not one that will linger in the memory. 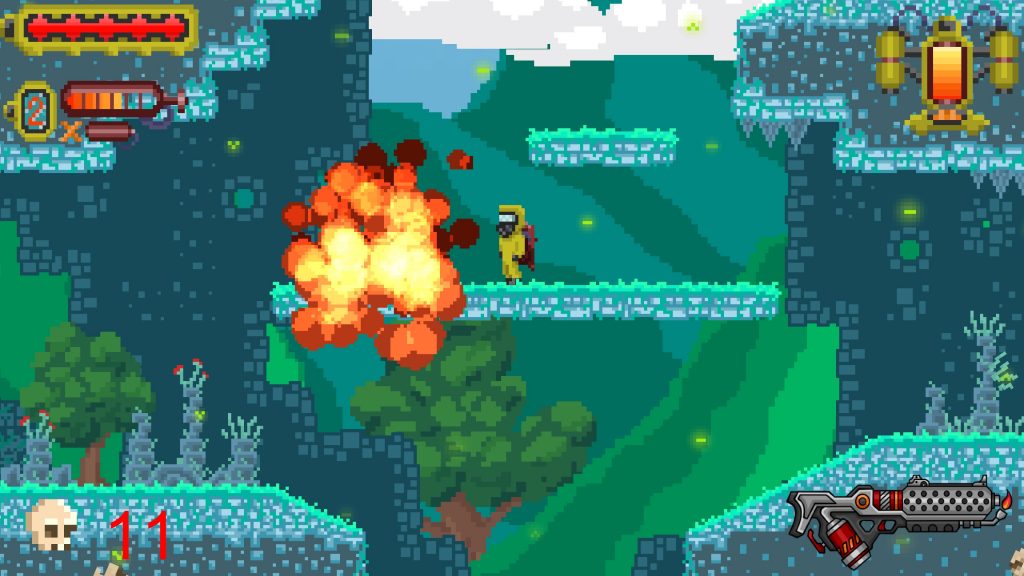 The sound effects do a good job of giving feedback. Foes will have their own set of sounds and projectiles can be heard being fired in your direction. Incoming damage is usually accompanied by a blood splatter and a pained sound. Effective, if a little bland.

Arsonist Heaven is a game hobbled by a handful of design decisions that really limit a player’s options. Some of the simplest games can be the most enjoyable but it does take a certain amount of craft to get that core experience right. Omegacore haven’t managed that. The reliance on trial and error makes stages quickly become a nuisance and reduces the game to a ghastly slog. Your liquidator’s nimble movement is quickly upstaged by faster enemies and at no point did I really feel like a foothold was being gained. I don’t like to belittle someone’s hard work but I’m struggling to take positives away from this.

Arsonist Heaven
3 Overall
Pros
+ When it works, there is a strategic element to tackling the main stages.
+ The extra weapons can feel powerful.
+ Enemies mostly behave in a predictable way.
Cons
- I felt very limited by the rigid combat and movement.
- The boss fights are horrendous.
- Each stage devolves into a frustrating trial and error exercise.
- Bland stage design.
Summary
Whilst I was hoping Arsonist Heaven to turn a corner, the limiting experience ultimately left me frustrated. Whilst I could eventually memorise and beat the standard stages, boss fights became more of a dice roll coupled with tests of execution that I simply wasn't up for. Initially, your movement seems capable enough but it soon becomes apparent how few your options are in combat. With a few tweaks, this could've been something serviceable. As it is, I can't say many good things about it. This feels rigid and lacking in ideas.