Occasionally, adventure games catch my drift and The Song Out of Space seems right up my alley. Coming from Pixel Noire, the tale of extra-terrestrial interference, murders and Cold War tensions do tick a lot of my boxes. Unfortunately, it all seems rushed and doesn’t linger on the intrigue to really stretch into something interesting. 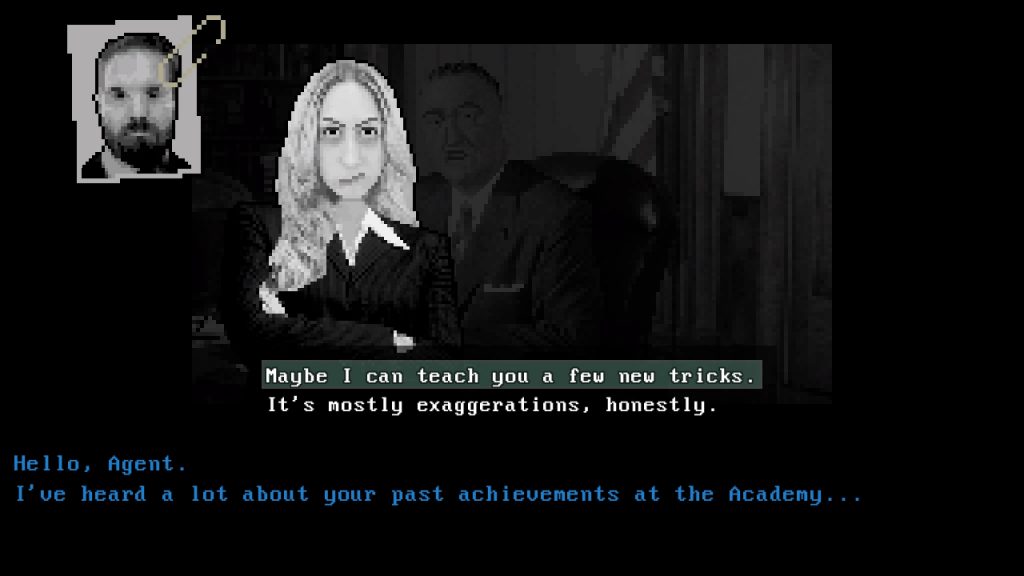 As the title implies, the plot takes on an extra-terrestrial focus. Ross and Kathy are too FBI agents sent to investigate a series of murders that happened at a laboratory in a small town. Naturally, the local cops have their suspicions and don’t take kindly to the Feds rolling in. Taking place during the height of the Cold War, the higher-ups would like nothing more than Communist involvement but it’s clear something else is afoot.

There is potential here for an X-Files monster of the week but there’s very little to play with. There is a mystery to solve and there’s an immediate hurry to run to the finish. From the beginning, the otherworldly angle is front and centre which leaves very little doubt in terms of motives and perpetrators. It would’ve been nice to see the narrative flirt with the Cold War angle but or used the aliens as a red herring. As it is, there’s a straight-forward mystery here that just doesn’t give itself much space to bob and weave. 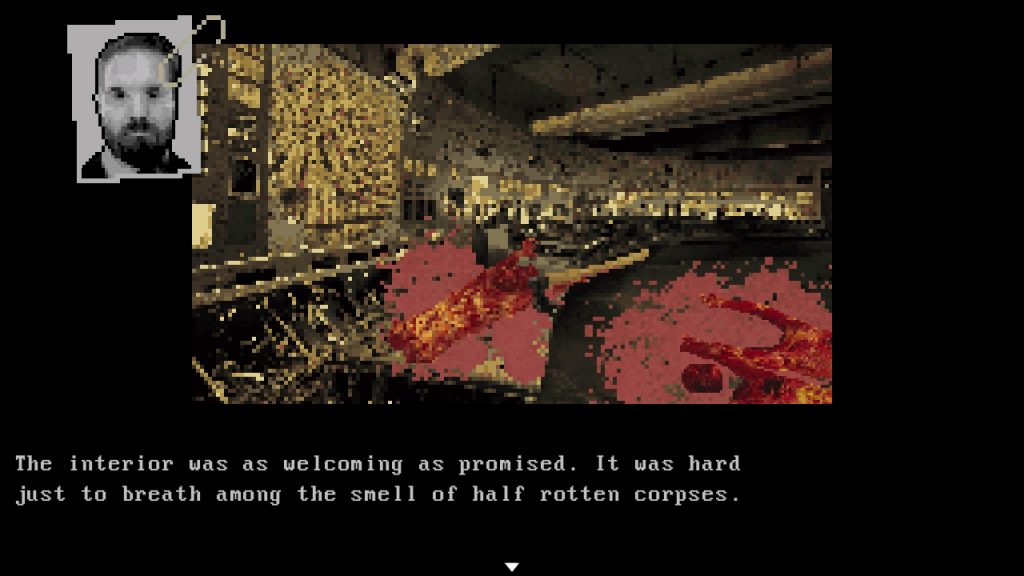 At least our main characters have some diversity to them. Ross is an older head, partnered up with Cathy who specialises in forensics. They compliment each other well and any conflict tends to be minor squabbling. Both are very much down to business but the game does well to split them up and branch them off into different avenues of investigation. Ross is irritated by the superiors interfering whilst Kathy’s new but not completely green to the situation. I like the contrast and the two leads are well-written.

The rest of the cast is also decent for what they have. The Sheriff and his deputy have obvious gripes about their turf being muscled in on but they do tend to be cooperative. They’re as shaken up as anyone by the murders and have a very obvious suspect in mind. Your other people of interest include one of the victim’s widows and a local conspiracy nut. Again, they keep the cast varied, even if they are effectively reduced to an interview.

It’s a shame this cast wasn’t used to stretch things out a little. Once they’ve fulfilled their purpose, they’re rarely revisited or present another strand to follow. Really, it follows on with how compact and constrained the plot is. There is one suspect, one motive and it’s all solved under an hour. There’s other endings to chase but not enough to really add layers on to a very basic cake. 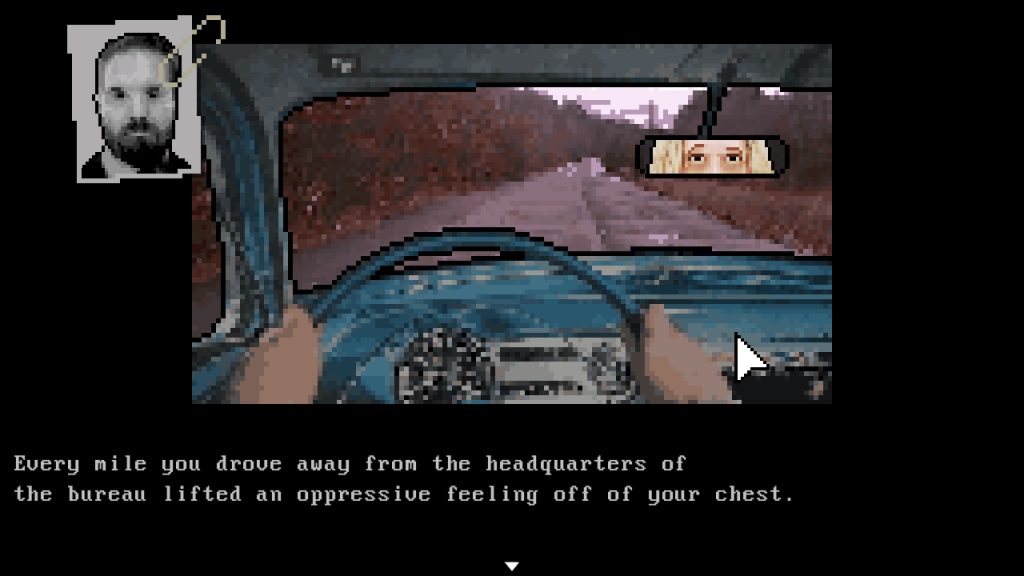 I do enjoy how replaying can let you explore your partner’s investigation. The Song Out of Space effectively uses a point and click interface to look at objects and perform actions. It describes itaelf as a visual novel but the format really seems more attuned to a traditional adventure game. The stuff you interact with is marked with chunky icons and they all seem to give you useful information. Interviewing witnesses gives you a number of questions to ask and nothing looks especially out of the ordinary with this system but it does give you plenty of things to ask. It’s nothing special but gets the job done.

The Song Out of Space is one of the ugliest games I’ve witnessed. It’s gone for a very specific look and it appears the art assets are pixelated beyond recognition. Some of the interiors look like they’ve been recreated from photographs. Same could be said for some of the character portraits but not all of them. Ross certainly looks the most human whereas his partner looks every bit an original work. It’s jarring and, when the game is so jagged and inconsistent to look at, it’s hard to really focus on it.

The murder scene especially looks incredibly messy. The gore is implied but the pixelised aesthetic really makes it ill-defined. I feel it really undermines the atmosphere. For a game that deals in the dark, the stuff it does show you a mush of pixels and hard to distinguish. It’s not pleasant to look at and very off-putting. Not in a good horror way, either. 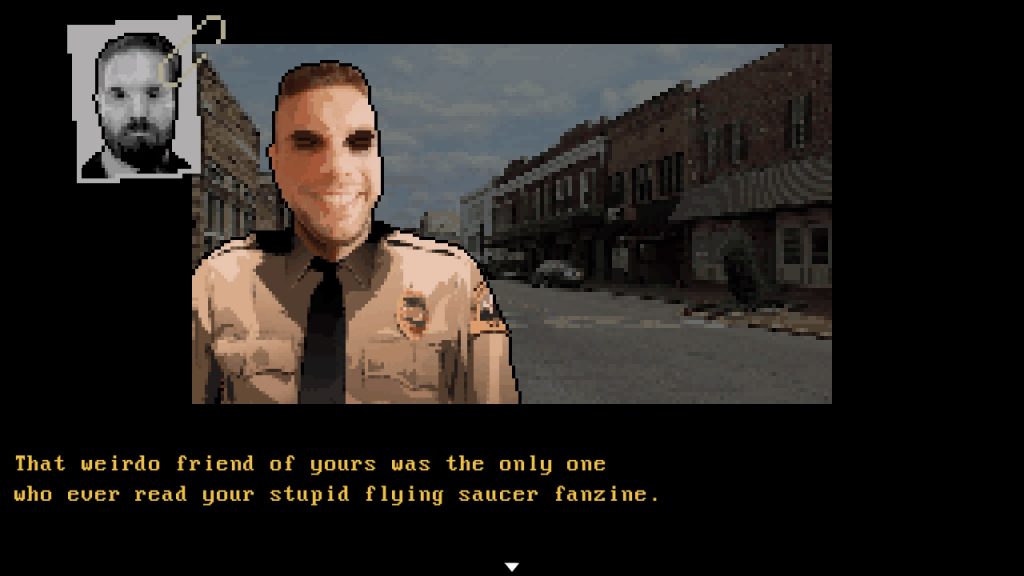 Soundtrack is incredibly minimal. I almost forget it’s there with the occasional background drone for company. Combined with the visuals, the spooky, dark atmosphere they’re aiming for just doesn’t materialise. I find it barren and harsh and the presentation doesn’t work for me. I don’t think it effectively builds tension, although the sudden rush of the plot might have something to do with that.

It’s a shame there’s not something more substantial here. The premise, setting and cast all have the potential to deliver an good narrative. As it is, the story rushes to the finish with no swerves or surprises to really speak of. I don’t feel I’m unravelling a larger mystery by finding the other endings and, for once, I find the pixelated visuals largely off-putting.

The Song Out of Space
5 Overall
Pros
+ Decently written characters.
+ Potentially interesting plot.
+ Splitting off the federal agents does help play up their individual strengths.
Cons
- I find the pixel art to be especially harsh.
- A very rushed narrative that leaves very little room for any surprises.
- A minimal, barren soundtrack that doesn't add to the atmosphere.
- The cast seems fairly underused.
Summary
When all is said and done, The Song Out of Space feels undercooked. The cast seems interesting enough but they're sparingly used in a plot that's all too short. Couple that with the rather unsightly presentation and I have a tough time recommending this. There are spots of intrigue in the plot that are all too hurriedly tied up and replaying doesn't add that much to the fuller picture.