Despite the ‘cover’ art and name suggesting this might be a Bomberman/Dynablaster clone, Dyna Bomb isn’t quite what we expect.  This one comes to us from 7 Raven Studios and is a 2D arcade-action puzzler that doesn’t have any strong comparisons with other games and there might be a reason for that but we’ll get into that later.

Each of this game’s 64 levels tasks you with one primary task, which is to unlock and reach the exit which you do by finding an ankh and then the way out, but also some secondary stuff if you want to get a better level rating.  As you fly around each level, assisted by a helpful jet pack that has no cool down, you’ll be able to collect stars and gems.  Get all of those to soothe your OCD but also light up a couple of icons at the end of the stage.  You’ll also get one if you kill all the enemies in a level. 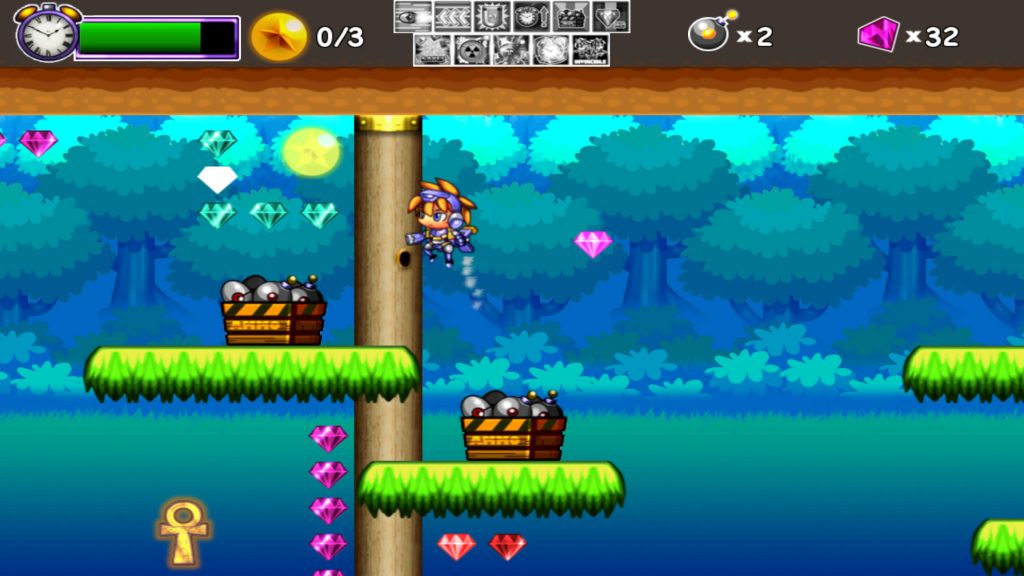 Killing enemies is done by flinging bombs at them.  You start with three but gain plenty more by picking up stashes on each level and aside from that completionist stuff we mentioned, there’s not much reason to do this as they’re pretty easy to avoid but you do get a lot of bombs and there’s a fair bit of backtracking, so it’s not a bad idea.  Aside from that, the real difficulty comes from electrical barriers, turrets and mechanical enemies that can’t be destroyed.

It’s not too tricky initially but after a while the slightly sensitive controls and the slightly too far zoomed-in visuals do conspire to make it quite easy to die a cheap death.  It can get quite frustrating but even though you can spend ‘gems’ on bonus power-ups, most of these aren’t all that useful and so you’re best off using that currency to buy a continue when you die.  Either way, the power-up stuff doesn’t really work here. 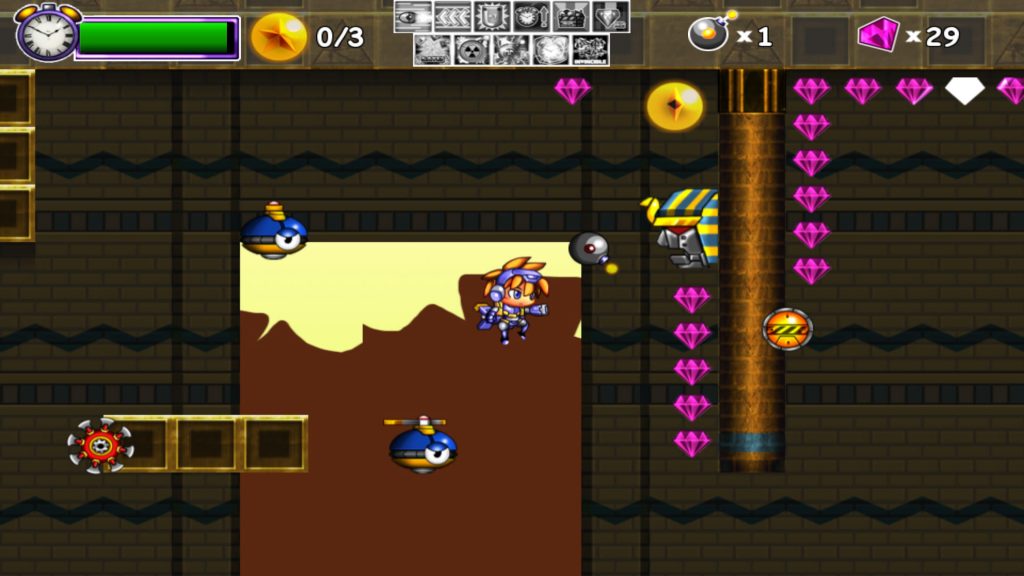 It’s all reasonably playable though.  The controls are reasonably simple and the gameplay is even simpler.  It’s basically a mix of Bomb Jack (but not nearly as good), Jet Pac (but scrolling) with a liberal sprinking of collectibles.  It’s different to all of those but equally it’s not something particularly special.  It all works and there’s some depth if you’re looking to 100% each level but it all feels just a bit too basic to really be much of anything.

Aside from that, there’s plenty of evidence that this is a quick and lazy port job.  Aside from some badly upscaled graphics in the menu, the interface is just terrible.  Clearly this menu was designed for a cursor but instead everything here is highlighted in a useless way and indeed sometimes you’ll get a choice of two options with just a tick and cross indicator but no visual clue as to what you are picking.  Also, the game honestly asked us if we’d like to leave a rating on the store.  PSN doesn’t support that.  This was a relic from some other version.  That’s kind of embarrassing. 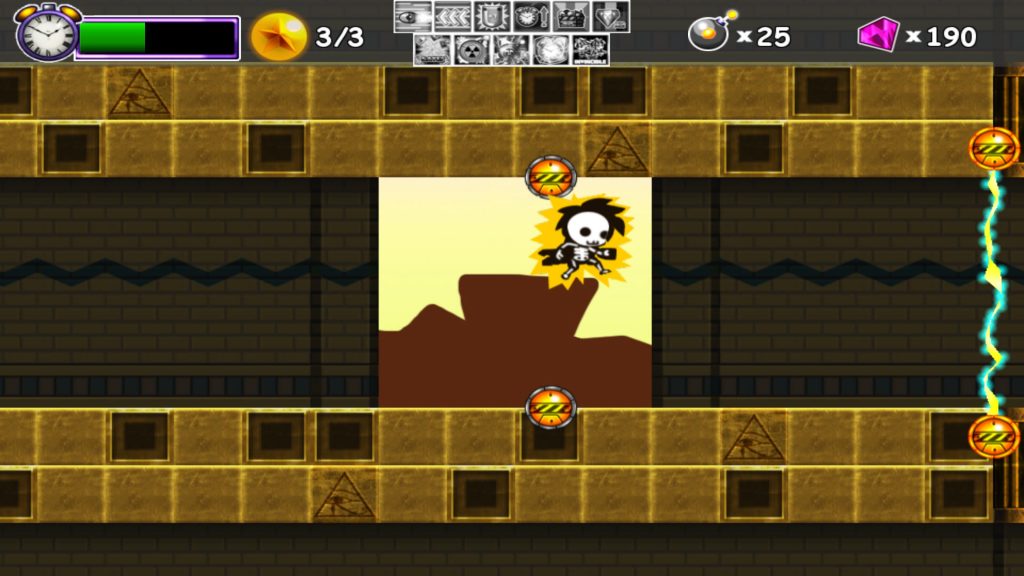 There’s also a weird inconsistency in the level design where you can have a level that is genuinely tricky to get through followed by another where the ankh and exit are basically one screen apart and you can finish it in ten seconds.  Yes, the game isn’t really looking for you to just finish these levels but given that the game has no leaderboard and the trophies don’t require you to three star and fully complete all the levels, there’s not really much reason to go the extra mile.

It’s not all that bad though.  When you get into the gameplay, there’s some simple arcade fun to be had and a lot of levels to complete.  The gameplay does work reasonably well and should appeal to retro gamers who fancy of a bit of jetpacking, bomb-throwing action. 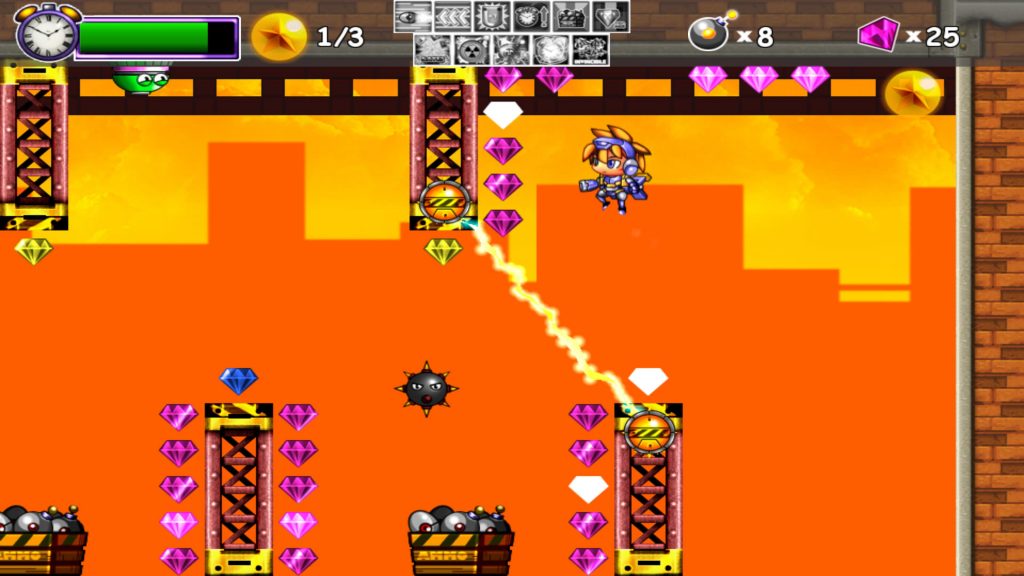 The visuals, once you get past the terrible menus, are alright in a colourful, clean Adobe Flash kind of way.  From the cute enemy designs to the multitude of colourful gems that litter the levels, everything is reasonably pleasing.  There’s not much variety across the eight worlds but overall this is a pleasing enough game which combines its breezy visual style with excited music.

As is all too common now, we expect this game to do the chunk of its business with the trophy collectors who love a quick and easy Platinum trophy with the remainder being either retro gamers or people who think it might appeal to kids (it might but it could be too tricky for young ‘uns).  But as a port of a long-forgotten 2016 PC game, you wouldn’t expect this one to do great numbers even at £3.99.

Dyna Bomb
4 Overall
Pros
+ Quite playable
+ If you're a completionist, it makes the game better
+ Breezy visuals
Cons
- Interface is pretty terrible
- Inconsistent level design
- Power-ups aren't very well-implemented
Summary
Dyna Bomb evokes memories of old console and computer games but is reasonably unique. Unfortunately it looks and feels like what it is, a cheap and cheerful port of a 2016 budget PC game.