Moto Roader continues the recent trend of obscure old console games getting ported to  modern consoles and certainly this is pretty damned obscure.  The original Moto Roader was a top-down futuristic racer which came out for the PC Engine in 1989 and, aside from a Wii Virtual Console appearance, it’s never had a port, reboot or remaster until now.

The game itself is very typical of the racing genre back then.  In the ’80s you either had the standard behind-the-car view from games such as Pole Position and Out Run that we still get today or the not as popular now top-down style which was popularised by Super Sprint, although this game borrows some gameplay elements from Badlands also. 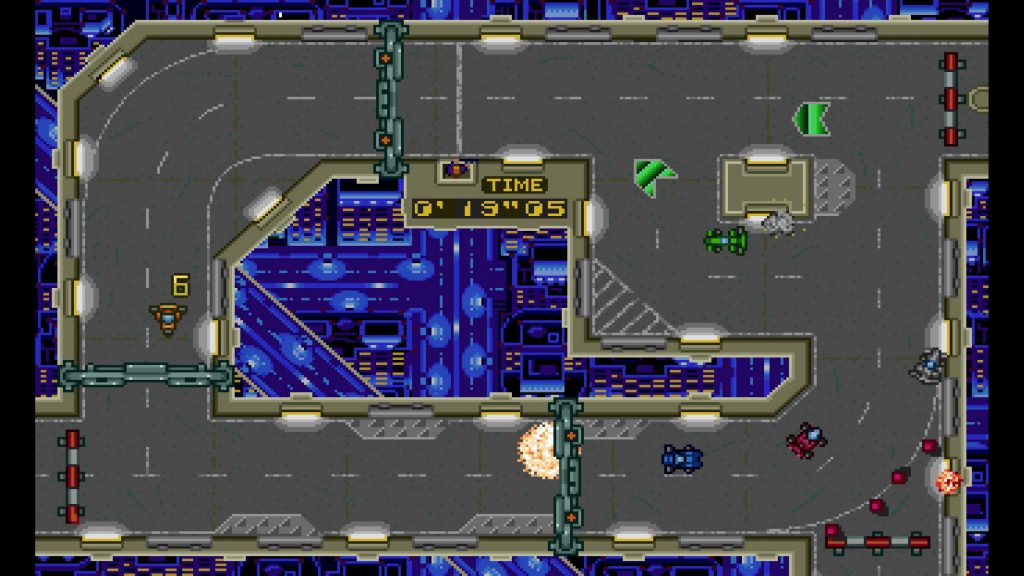 There’s not a particularly complicated structure to the game.  You pick one of five categories of track (Circuit, City, Nature, Marchen and Special) and then play through five tracks in a grand prix format with a mix of human or AI opponents.  Humans (up to four of you) share the screen without the need of any split-screen because each track fills the screen without the need for scrolling (again, think Super Sprint or Super Off-Road Racer).

The controls are quite old school here.  You accelerate with

.  The only other buttons are the triggers and shoulders firing off missiles and dropping mines.  You also have some additions with buttons assigned a brand new rewind feature as well as two on the fly options for changing the look of your car and, stranger still, changing the steering from a rotation-based style to one that maps directions to the directions of the left stick.  It’s odd but it’s nice to have the flexibility to pick the controls that most suit you. 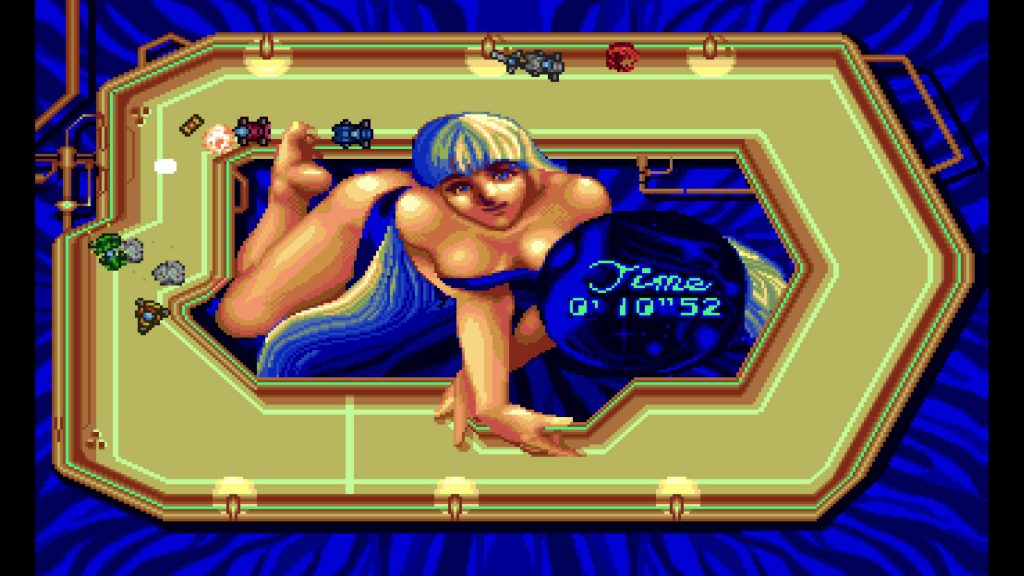 So essentially all that happens is that you all race but with the addition of some combat.  Missiles and mines can be used to disrupt other racers but it doesn’t destroy enemies.  Instead, it’ll just affect their steering enough to make them, or indeed you, to steer off course.  The game is reasonably forgiving but also manic enough that skill and luck can both be factors in the outcome of a race but it all feels like a level playfield with none of the imbalances that games with power-ups can have.

Aside from that though, there’s not a lot else to say about the gameplay.  The only complications along the way come from tracks themselves which begin to increase in complexity, adding speed boost arrows, slower areas (such as grass), frictionless zones and crossroads.   Thankfully though, the tracks do all remain playable and generally fun to race on.   We liked the creativity of some of the tracks to, especially the one that had a short cut across live train tracks. 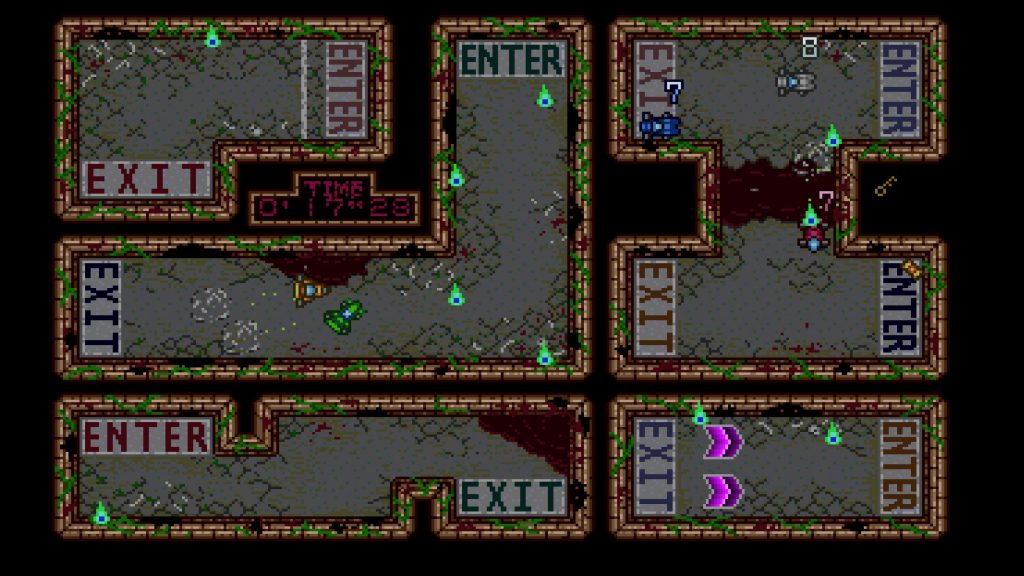 Where games like this can fall afoul is when they get too difficult but that’s not really an issue here because winning and losing doesn’t come with any consequences.  Even the worst players will be able to see all the tracks and successful players won’t be rewarded in any way.  In fact, even the trophies are pretty much just participation trophies as such as you just get them for playing each of the 25 tracks with no trophies for winning grand prix or even single races.  That makes the new rewind feature somewhat redundant also.  It certainly would have improved the game if the trophies had some sort of skill factor to them.

So really there’s not a whole lot to comment on beyond the fact that it’s all very playable and that nothing is locked out by progression.  Aside from that you can mix and match various tracks to make your own grand prix tournaments and there is also a mode called ‘Omake’ which is basically football/hockey with cars.  Two players face off to score goals with a ball.  This is PvP only though with no AI play.  It’s a nice little bonus mode anyway. 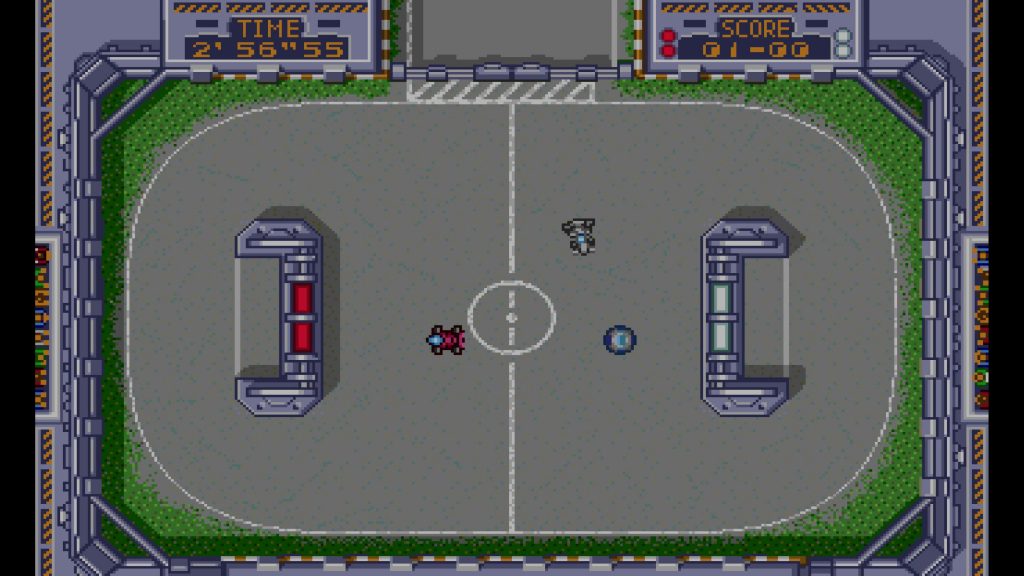 The game is quite nicely presented given that it came out in 1989.  The PC Engine was a pretty cool console with some great looking games and Moto Roader was no exception.  The visuals are nice and sharp and there are some nice details on the tracks, as well as a decent degree of variation as you race through the five main categories.  Everything moves smoothly, and pretty fast, giving the racing a good, chaotic feel.  There’s also a decent chiptune soundtrack too which is very typical of the period.  This port also adds the usual CRT scanline filters and these are surprisingly customisable.

Although Moto Roader is destined to be nothing more than a quick double Platinum for the trophy whores among  you (the game offers separate PS4 and PS5 versions, albeit with no differences at all), it’s been nice to discover a long-forgotten retro game that surely would have had its fair share of fans back in 1989.  This is a high-quality console racer, given a respectful port job.   However, in an ideal world this is best played with three friends but with no online play and in these Covid-y times, that might not be possible.  Also, if you do have three gamer mates around, they might wonder why you are trying to make them play an obscure racing game from 33 years ago.  But if you can coerce them into playing it, Moto Roader could be a good time.

Moto Roader
5 Overall
Pros
+ Lots of tracks
+ Good controls
+ Fun with friends
+ Decent screen options
Cons
- Very old-school
- No real single-player structure or challenge
- No online play
- Rewind feature is meaningless
- Trophies are far too easy
Summary
A barely-known top-down racer from 33 years ago might seem like an odd choice for a 2022 port but while it might not make much sense now, this is clearly a decent retro title and one that deserves another fifteen minutes of fame. It's let down by some careless trophies though that don't really push the player to play it better.