Spiders are a French developer most well known for action RPGs like the enjoyable Greedfall. They’re generally not the most polished titles but they’re reasonably ambitious. Steelrising is also an action RPG, but this time taking a far greater influence from From Software titles. That’s aiming very high, but how close do they get? 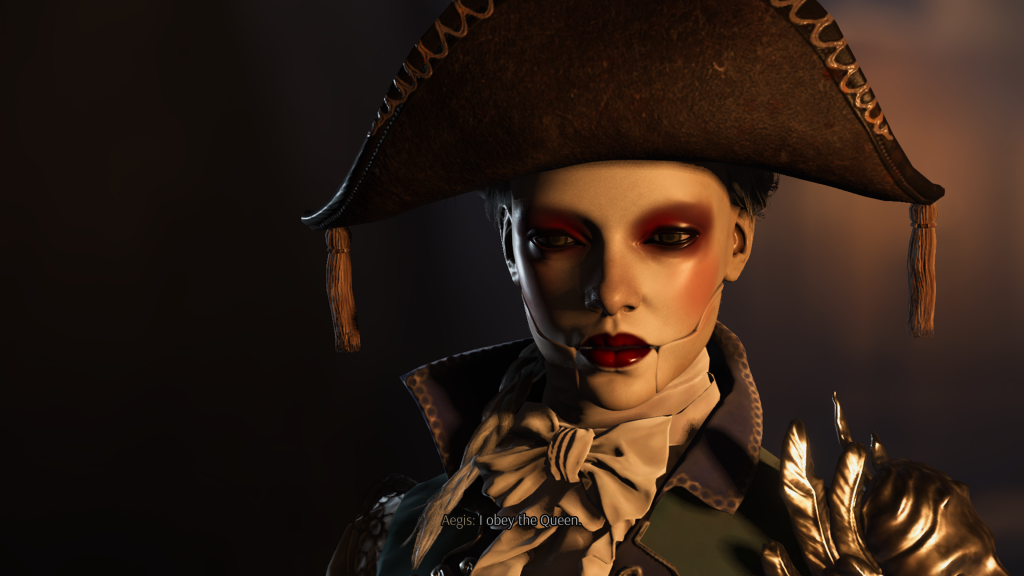 Steelrising takes place during the French Revolution, with King Louis XVI having set an army of automatons on the general public. The Queen is basically being held prisoner under the guise of being protected, so she sends her own personal automaton to Paris to stop her husband’s reign of terror. This is your character, Aegis, who was created to entertain through dance but is a capable fighter too.

You have some customisation options upon starting the game, both cosmetic and class-wise. It’s not as in depth as others in the genre but you can put your personal stamp on things with colours and hairstyles, with the four classes you can choose between deciding your starting weapon and some basic stats. Weapons can be slow and hard hitting, faster or even ranged, plus each weapon has a special attack that can vary greatly including defensive or elemental. 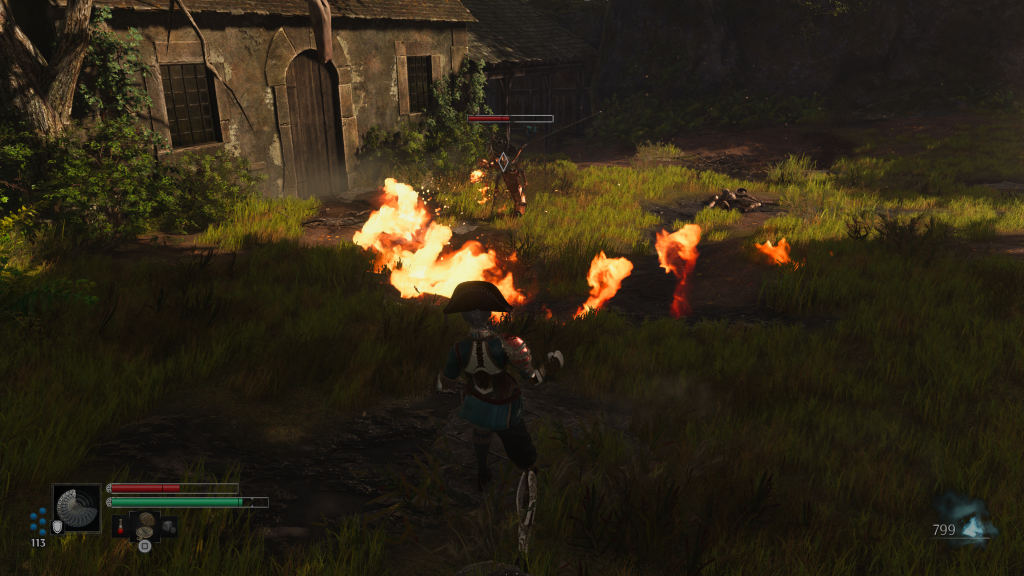 These are just starting stats though, you can level however you want as you progress and equip whatever weapons and armour you find so you can experiment as you like. The basics are always the same however and will be familiar to fans of Souls titles. You have a light and heavy attack on

respectively and you have a dodge which has invincibility frames. Rather than a roll it is a fast dash, like Bloodborne, so getting in, doing some damage before getting out is the key to success.

There is a stamina meter but as Aegis is an automaton it’s based around overheating and a cooldown mechanic actually allows you to stay in the fight longer. Once you deplete your ‘stamina’ the bar must completely empty before it starts to refill again as Aegis cools. During this time however you can press

and stop the bar as it depletes. Time it well enough and you can have near enough a full bar ready to go again, with the trade off that you start to accumulate frost damage. It’s a bar that has to fill all the way but once it is you’ll be frozen in place and have to shake free or be a sitting duck. It stops you being able to constantly just cooldown but it is a fun mechanic which keeps you in the fight. 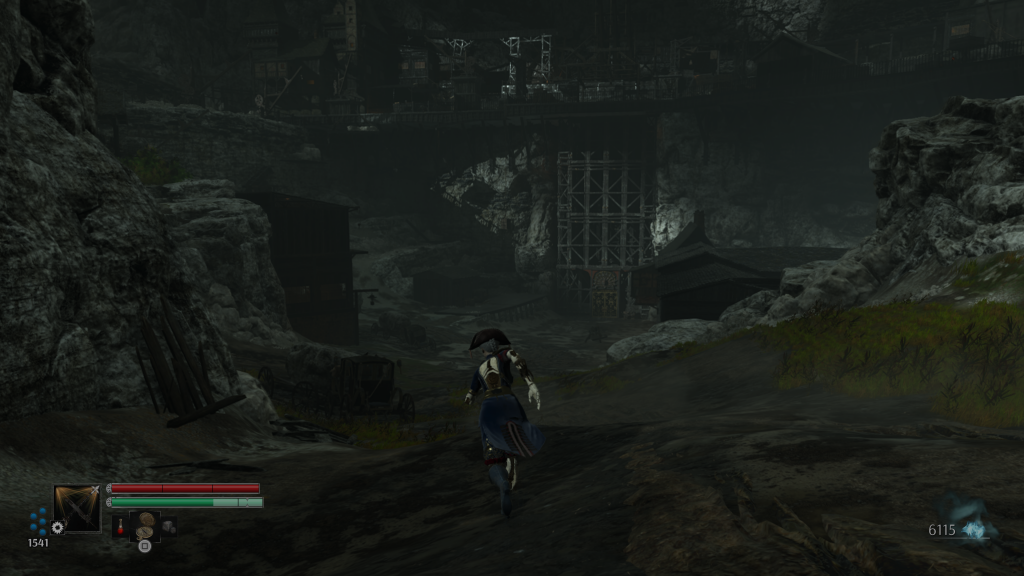 Other than that similar Souls staples are here: Vestals act as bonfires, checkpoints that you’ll return to upon defeat, you’ll drop your Anima Essence (experience and currency) when you die but can recollect it as long as you reach that point again and there is a healing item which has limited uses but will be replenished when resting at Vestals. You can level up and shop at Vestals too, but interacting with the Vestal respawns all the enemies you’ve defeated. All this will feel familiar to fans of the genre.

The game is broken up into zones, rather than being one interconnected world. You can travel between them via horseless carriage and you’ll be returning to zones multiple times as there is a Metroidvania element to the levels. The first few bosses you defeat will grant you new powers which will allow you to access previously inaccessible sections and each zone tends to loop around and lead back to earlier parts of the level. These can get a little complicated as you walk around similar looking streets, it can become maze like. A local map would be appreciated as you’d get with other Metroidvania-type games which would also help with keeping track of areas you’d explored but could not advance with yet, but alas there isn’t one. 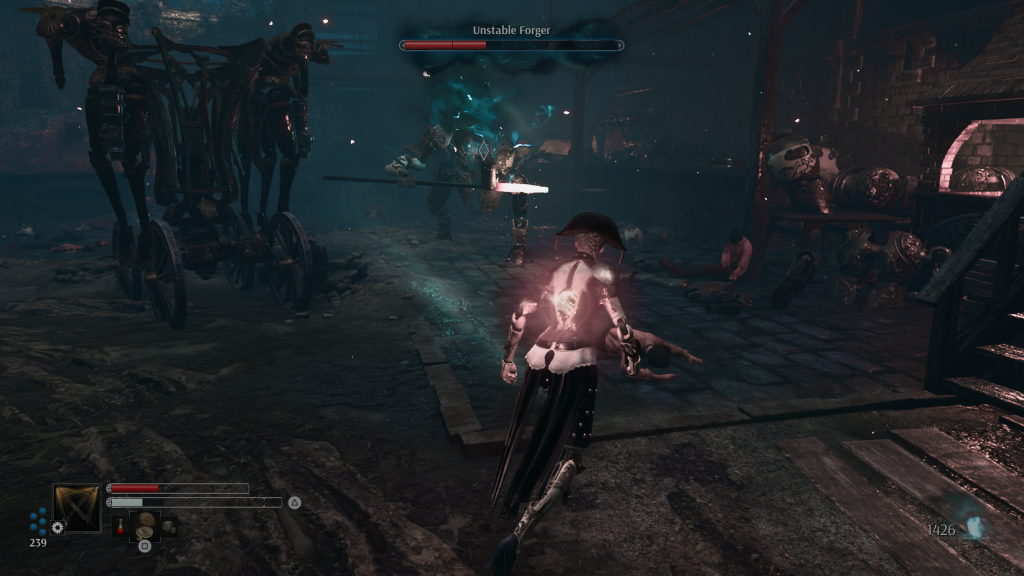 There is also a greater focus on quests and side quests in Steelrising. Early on you find a compass which is an item you can use which will mark objectives in the environment. This is very helpful, as I said the levels can get quite confusing to navigate so having these markers to aim towards is very useful. The side quests will be for other survivors and will task you with finding items for them and provide some personality, which Aegis lacks. You get some choices to make at times too, siding with certain survivors over others for example. They pad out the game but they give you a reason to explore the world more and I enjoyed completing them.

Doing pretty much everything took me about thirty hours, but that was with getting lost at times. There are a lot of weapons to play with, though limited materials to upgrade them, plenty of optional exploring to do and the side quests are optional too. Concentrating on just the main missions would probably allow you to get through far, far quicker. 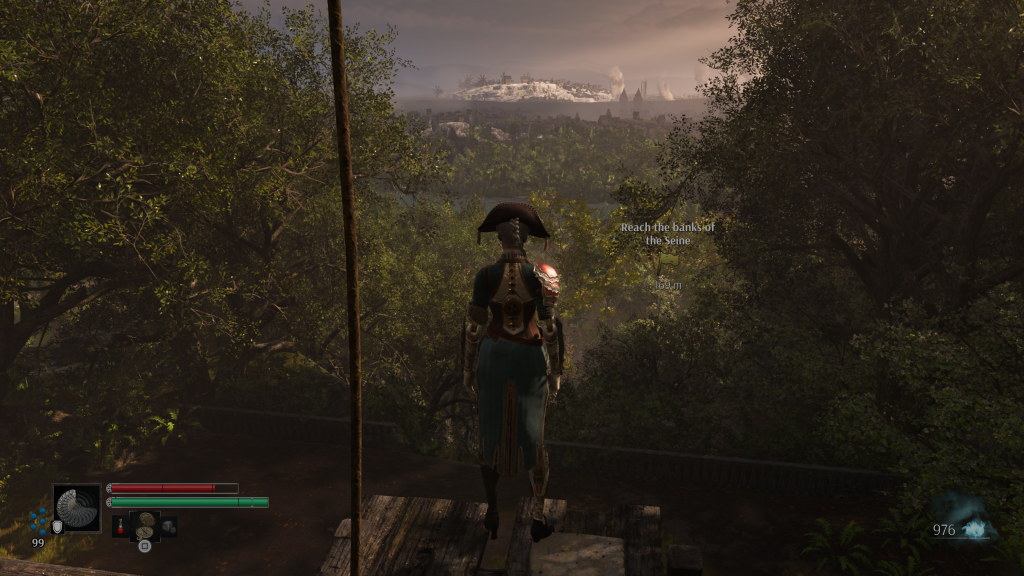 Technically things are good, bar the odd hiccup (pre day one patch). The streets of Paris look very nice with great lighting and, in general things run smoothly. You have a few different graphics options, with frame rate, resolution or graphics prioritised, though I stuck with the frame rate option. You are always fighting other automatons and although there is some variety you will start to see the same ones over and over, with some just more powerful variants. Actual bosses are unique with some cool designs but they never feel as epic as they can in From’s best.

As the game progressed I actually found it easier, especially the bosses which took fewer and fewer tries. I had to get used to the feel of the controls compared to similar games but once I did I found the difficulty about right, for making progress. If you do find it too difficult the game comes with some very friendly Assist options, including lowering the damage you take and not losing your Anima Essence after dying. It does disable some trophies but players calling out for the feature in Souls games will be happy. 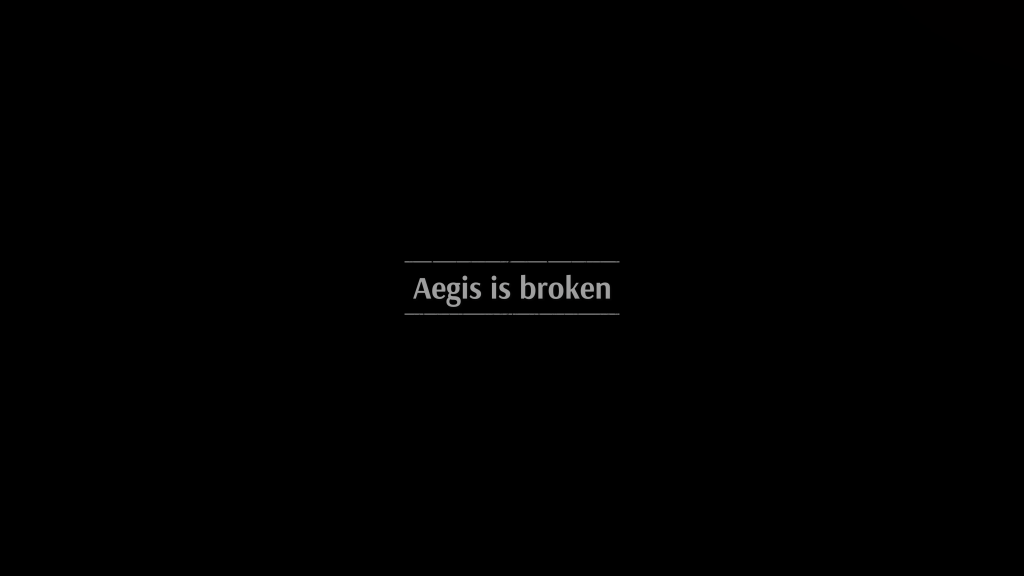 Steelrising is a decent Souls-a-like with a unique setting. Early stages can get a little too mazy without a map to aid you as, as attractive as they are, the streets of Paris can look quite samey. The objectives and compass help you through the quests however, it’s only when these aren’t available that it becomes an issue. Otherwise the combat is enjoyable, with a range of offensive options, a focus on speedy movement and the quests give you plenty to get on with. It’s not going to topple to best of the genre, or even something like The Surge 2, but it is an enjoyable adventure with some interesting ideas of its own.

Steelrising
7 Overall
Pros
+ Fun combat
+ Quests are helpfully logged
+ Metroidvania elements to enhance exploring
+ Compass aids navigation a lot
+ Assist mode for those who feel they need it
Cons
- Early levels are very maze-like
- Enemy variety could be better
- Difficulty feels weighted towards the early game
Summary
Steelrising has plenty in common with others in the Souls genre and even though it lacks the polish and variety of the best, the unique setting and some neat gameplay ideas make it worth a look.