I don’t envy the job Volition have of taking the Saints Row series to new places. Over the course of four games, the crew began in Stillwater and became masters of both time and space.  Just how do you follow that?  On paper, a reboot seemed like a sensible idea but 2022’s Saints Row has resulted in a great reset that feels limiting and lacking in imagination. 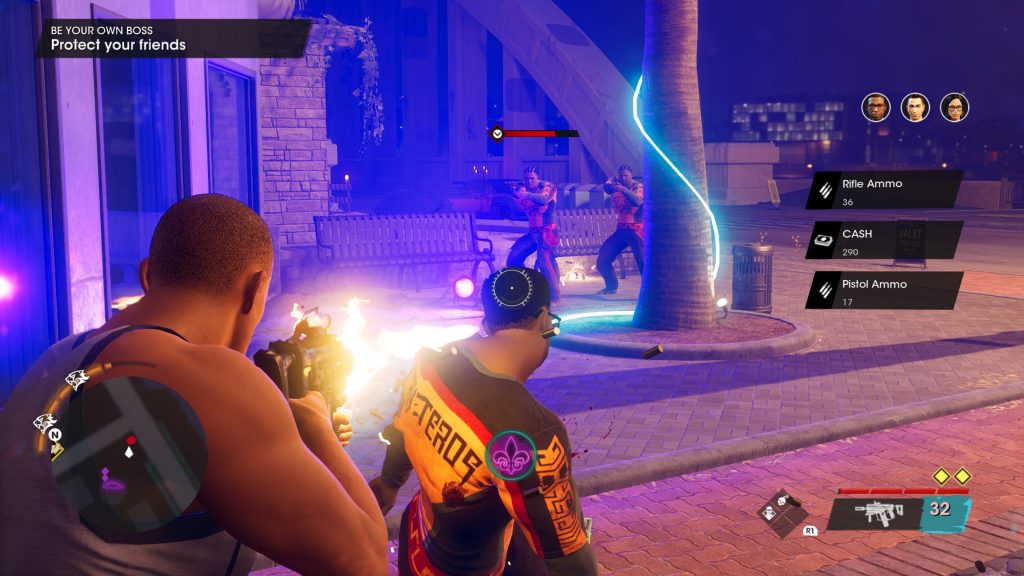 I’ll get the obvious discussion out the way first. During my time with the game, I’ve experienced a couple of heart-stopping glitches. Both were fixed by rolling back a checkpoint or rebooting the game but there’s an uneasy fear that comes with Saints Row’s technical unpredictability. Whilst not permanent, there is something troubling about a mission grinding to a halt because of some scripting failure or a main character who refuses to move. There’s smaller issues like AI routines halting and nonsense with the physics. Compared to others, I’ve been relatively lucky. It has been impossible to ignore the discourse around these insufficiencies and I’ll stamp this firmly with a disclaimer: You experience may vary.

When it does work, Saints Row is a back-to-basics crime game about friends. The new Saints are roommates who are all struggling to find employment whilst also having a hand in the city’s organised crime. They’re all cosy with each other, have a sidekick cat and crack their own in-jokes. However, they slip into gang life a little too easily. It’s almost immediate how they settle into city-wide domination and I don’t sense a grand journey behind it.

Part of it is down to Saints Row‘s writing. The friends seem perfect. There’s no conflict and the wise-cracking your boss character does strikes me as smug. At times, it feels like all the edge has been smoothed off in favour of a more homely crew. It feels like a safe approach and, for that reason, I can’t get behind these guys. 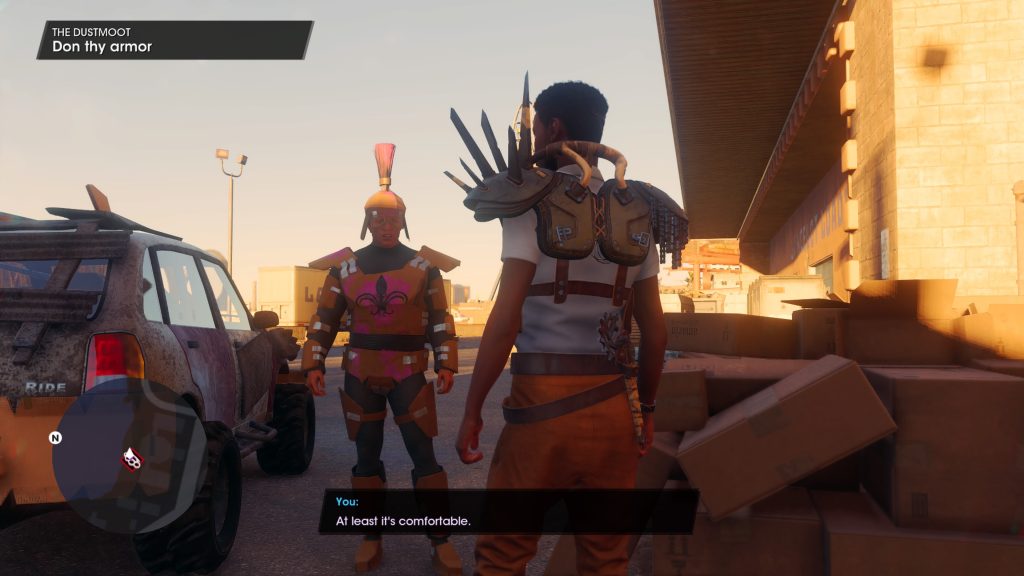 There is some character development but it seems only written for the game’s few loyalty missions or given a cursory line in the script. Kevin barely references his time as an orphan, Neenah’s mother is dead. Eli’s a nerd. That’s all you get and it makes this band of best mates feel one-dimensional. I liken this to tagging along with a group that you’re simply not a part of. You’re there for the ride but you don’t want to really know them. There are moments between the crew that work, particularly in the home stretch. Unfortunately, they’re few and far between.

The antagonists feel short-changed too. Marshall Industries are a private military corporation that seemingly runs the town. Aside from the introduction that leads to The Boss’ sacking, they barely feature. The other gangs appear more heavily but, even then, there’s no opposing figure to tackle. If the other gangs have their respective leaders, Saints Row isn’t interested in telling us their story.  When a character does come along that could oppose the best buddies, it’s not handled as well as it could’ve been.

They do deliver a change in location. Santo Ileso is a mid-western US facsimile that does deliver some flavour of its own. Stillwater was fairly generic but the older games were never really about the city they inhabited. Here, there’s some attempts made to give the city some colour and history. It can be fairly arbitrary with side-missions linked explicitly to discovering those historical aspects. It leads to more goofy writing which does seem wide of the mark but there’s also mention of artworks. To Saints Row’s credit, there is an effort here to make city landmarks stand out, even if I’m not sure if they’re trying to say much with it. 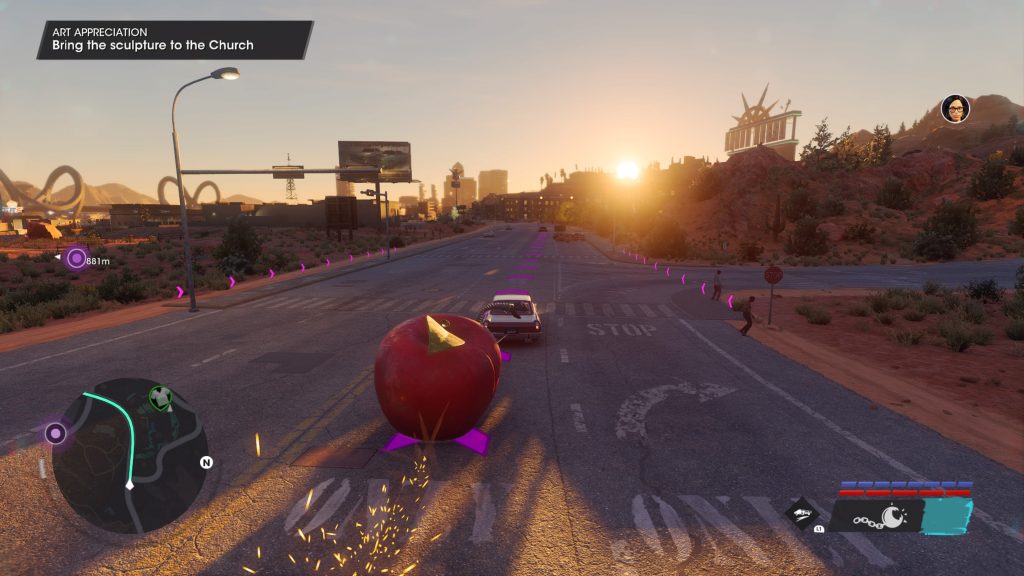 Visually, the city gets the occasional dust storms and night time can help make the more neon attractions stand out. Indeed, the way Saints Row uses colour gives the world a little bit of life. It’s a shame the lighting is so dull indoors. I’ve had shoot-outs in dimly lit locales and the neon outdoors can blast your retinas. In a technical sense, player models seem fine but the overall feeling is this game doesn’t look especially polished. I’ve had rare occasions of traffic phasing out in the distance. The series never really pushed boundaries but I look at Santo Ileso and see a world struggling to set foot beyond the last decade.

As a series, Saints Row did well to integrate music into their bigger set-pieces. It helped make those memorable and talked about. Unfortunately, the soundtrack on offer kept me firmly in my seat. When music is curated for moments, it feels forced. Your first encounter with the police gets accompanied by KRS-One’s ‘Sound of da Police’. Too on the nose for comfort and the rest of the soundtrack did very little to venture out of the background. There’s no gusto, no confidence to it and I found it very plain.

Gameplay feels equally behind the times. Ideas have been taken but it seems Volition are much more comfortable borrowing from within. Mechanically, the shooting feels reasonable, although the weaponry doesn’t really do much to distinguish itself. I settled on an automatic rifle but the pistol proved a good standby. The rest of the arsenal I barely cared for and none of them shared the inventiveness of the previous two games. Again, when you go back to basics, this is what’s lost.

It has been interesting to drive in a Saints Row game again. A couple of new additions arrive with remarkably easy drifting and the ability to sideswipe opposition. The former seems to be a way to replace the handbrake whilst the latter proves handy in a chase. Like the shooting, driving is serviceable but, given the city’s size, fast travel points are worth unlocking sharpish. Missions are decently checkpointed but they all start at a chosen location and you cannot fast travel within a mission.

Finally, we come to side-missions which seem to have been bolstered. As well as the usual choplifter and insurance fraud diversions, an empire building mini-game gives you the opportunity to unlock more criminal ventures. These will serve you a steady income but also hand you a series of jobs to accomplish. Aside from the LARPers that have a few missions of their own, these ventures feel repetitive to complete. Anyone with the itch to do everything may feel burnout as you cover every inch of the map. There’s a lot to do within Santo Ileso but I don’t find much of it memorable. 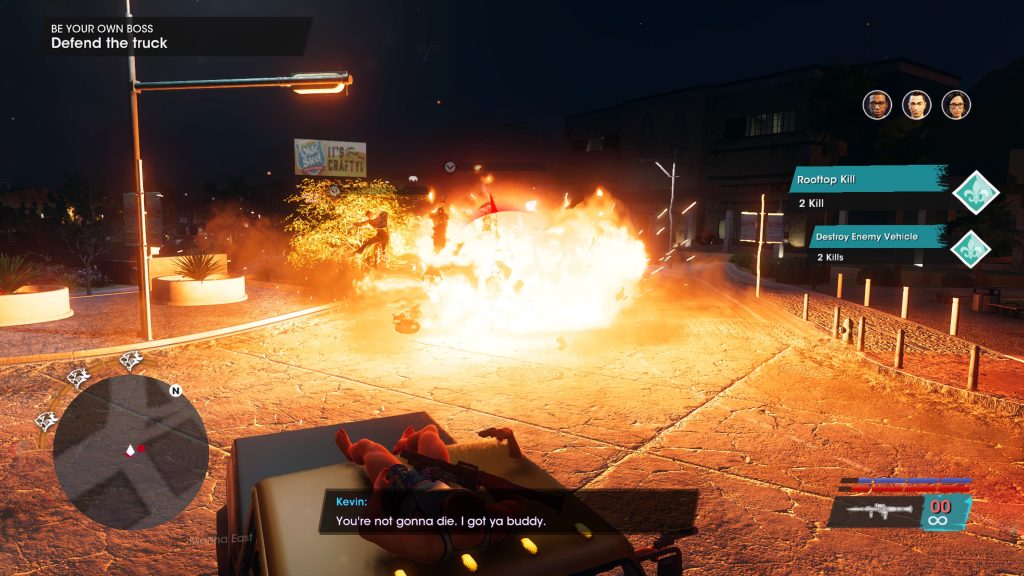 If you are hit with boredom or are having issues with the game’s challenge, there is a wealth of accessibility options to tweak gameplay to your liking. The Entrepreneur default setting didn’t cause me too much trouble but altering this to a granular degree can assist you with things like mission timers, notoriety and so forth. Sometimes it’s welcome when most of the game is a shooting gallery. On top of this, the character creator remains one of the more impressive around.

It’s the thing you fear with reboots. Even if you’re going back to square one narratively, something has to move forwards. What Volition has managed in Saints Row is give us a familiar but dated open-world experience. The series did well to drag itself from mediocre to memorable but this reset puts in stark daylight how unnecessary this game feels. They did something but the few ideas brought to the table just did not land for me.

Saints Row
6 Overall
Pros
+ Plenty of customisation on offer.
+ The city is packed with things to do.
+ Sideswipes give you a welcome combat option whilst driving.
+ Serviceable gunplay.
Cons
- Technically unpredictable.
- The new crew's cosiness doesn't really fit.
- Not a very memorable journey.
- Repetitive side-missions.
Summary
It was always going to be a difficult task but Saints Row feels like a game that doesn't really need to be. Even if the technical issues weren't a factor, what remains is an okay but fairly forgettable criminal escapade. The new characters felt like a party I wasn't invited to and whatever confidence the old games had has been sanded away. It's not awful but there was a massive sense of disappointment I could never shake through my playthrough. I wish this was better.