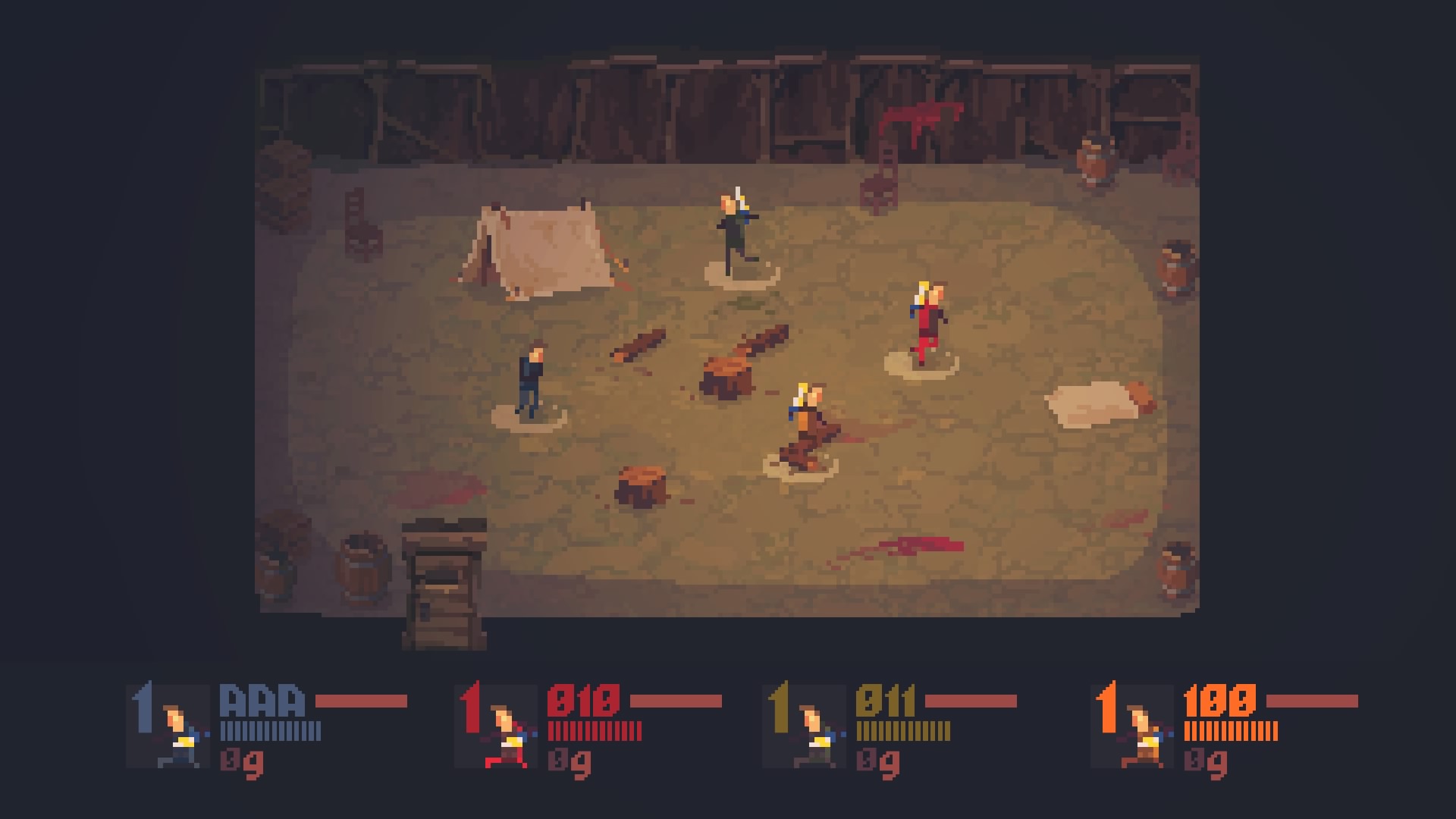 At some point, I’ll stop being surprised by the couch co-op renaissance. It’s a genre that’s returned with strong representation and has delivered some manic entertainment. Now, emerging from a 2014 game jam comes Crawl. Australian duo Powerhoof are hoping years of refinement and hard work can pay off. 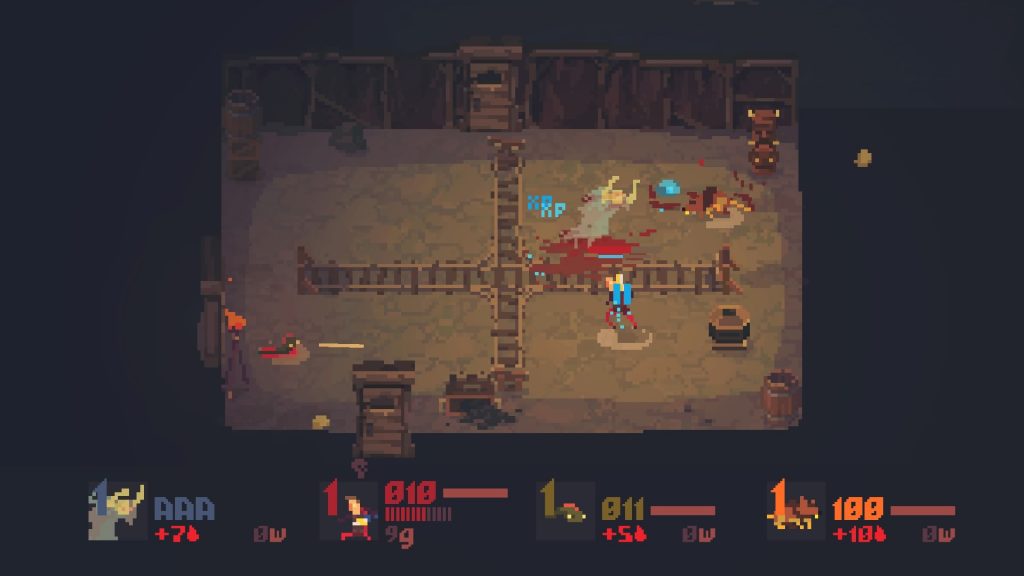 Initially appearing like a standard dungeon crawler, Crawl‘s swift and simple tutorial lays down the laws of the land. An ominous narrator booms out the game’s solitary aim. Each player controls a hero and they’ve been cast into a catacomb and they simply must escape at any cost. There can only be one hero at play at all times so an opening duel determines who plays that role. Far from sitting out the remainder of the run, the losing players take on a spirit form that can now possess and spawn monsters to hinder the hero.

This adversarial turn is a great mechanic and it’s one the game hangs the flow of the game on. Spirits can inhabit inanimate objects to throw hazards in the hero’s wake. Some rooms present combat arenas that allow monsters to be spawned in. The ultimate goal of a spirit is to retake their bodily form and become the hero for themselves. Once that happens, the tables are turned with a new hero being the focus of some ghostly ire.

The dungeons encompass many randomly generated floors with a boss available to tackle once the hero reaches level ten. Opportunities to level up present themselves frequently with experience dropping from each monster you slay. This increases your stats and ultimately gates your way towards the boss. 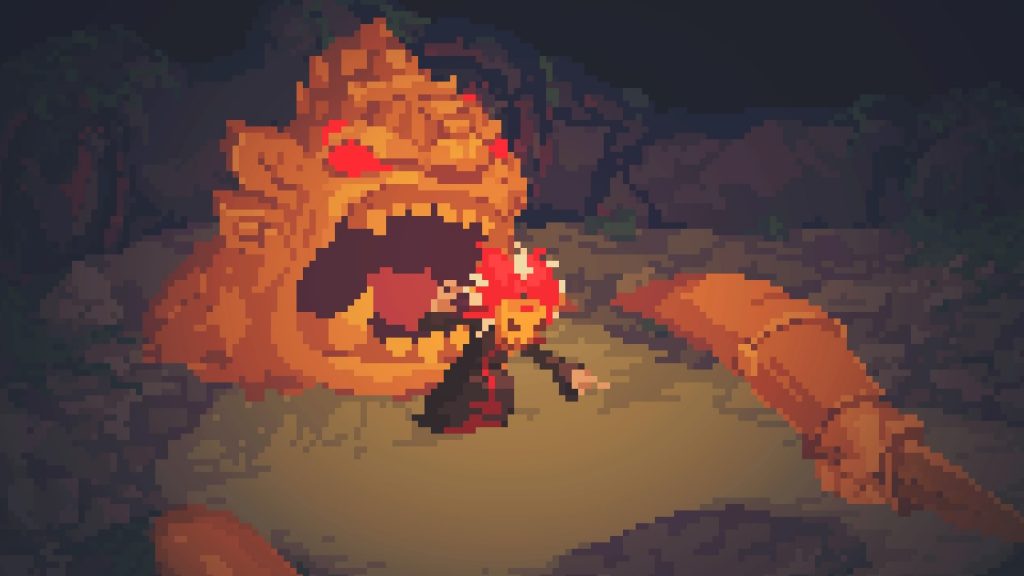 Heroes also gain gold which can be used to purchase new gear at the shop. Wares are randomly cycled in but you can usually find something of benefit. There’s a handful of weapon types, each with their own distinct advantages and disadvantages. Potions offer stat bonuses whilst other items can bestow new special abilities from evasive dodges to powerful attacks. When your luck’s in, you can make some pretty interesting builds. They get put to good use against the more advanced demons your friends will throw at you.

The boss you face is also randomly plucked but, once encountered, that boss remains until one of the party can defeat it. There’s a few of them and they all offer different mechanics and challenges. They also come with their own specific arena so studying the environment for cover is crucial. Once the boss is defeated, that game is over with the hero being announced victorious. Heroes will have three attempts between them. Once expunged, that game is over with the winner decided by their respective experience haul. It’s easier said than done as any remaining spirits can control the bosses limbs for added tension. Indeed, the victory conditions do make some strategic play. You could bank on someone not taking down the boss and prioritise experience or go for broke and tackle the beast.

Whilst spirits can outnumber the hero, there’s compromises at play that help maintain a degree of balance. Spirits cannot purchase gear of their own or level up until they become the hero character. As the hero gains experience, spirits gain wrath which is a currency used to bolster their monstrous ranks. At the end of every floor, spirits can cash that wrath in. 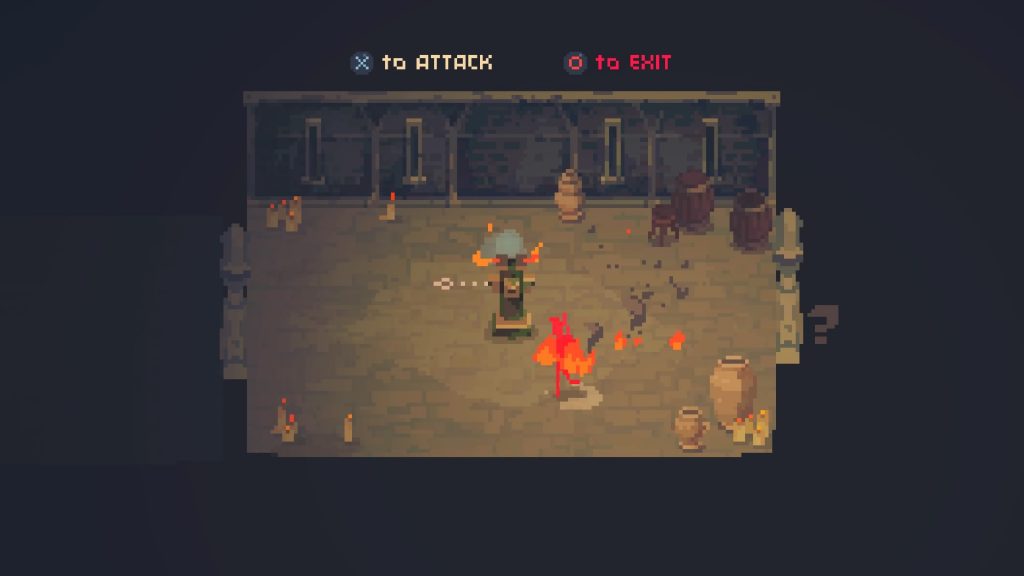 Runs encompass a back and forth that’s fun to involve yourself with. With a full compliment of players or bots, the action quickly becomes chaotic with numerous spirits trying to halt a heroes progress. It’s best enjoyed with other people but the CPU can provide ample opposition. You can play with up to three others so, if you fancy a smaller scrap, you’re obliged. A party of human players will provide the greatest thrill as allegiances can turn on a dime thanks to a near constant us versus them mentality. Unfortunately, co-op is limited to local players so you’ll have to make use of SharePlay if you have friends further afield.

It carries a typically retro aesthetic with blocky pixel art visuals. It’s not always easy to follow, or easy on the eye. Environments lack a variety that can make dungeons feel drab and dull.  It animates well and the iconography dotted around the level makes it simple to distinguish dungeon paths to the nearest exit, shop or boss. It can turn into a bloody mess when everyone’s in play with bullet hell being served up on the menu. I would’ve preferred a cleaner look but Powerhoof are sticking consistently to a chosen style. It extends to a chiptune soundtrack which delivers an admirable score that compliments the look and feel of the game.

A run will typically last 30-45 minutes so you’ll usually have plenty of opportunities to turn the tide of battle. It isn’t as immediate as some of it’s competitors but, for those wanting something more involved, Crawl provides.  You’ll see a lot of what’s on offer within a couple of hours but hopefully Powerhoof can keep supporting this title post-release. 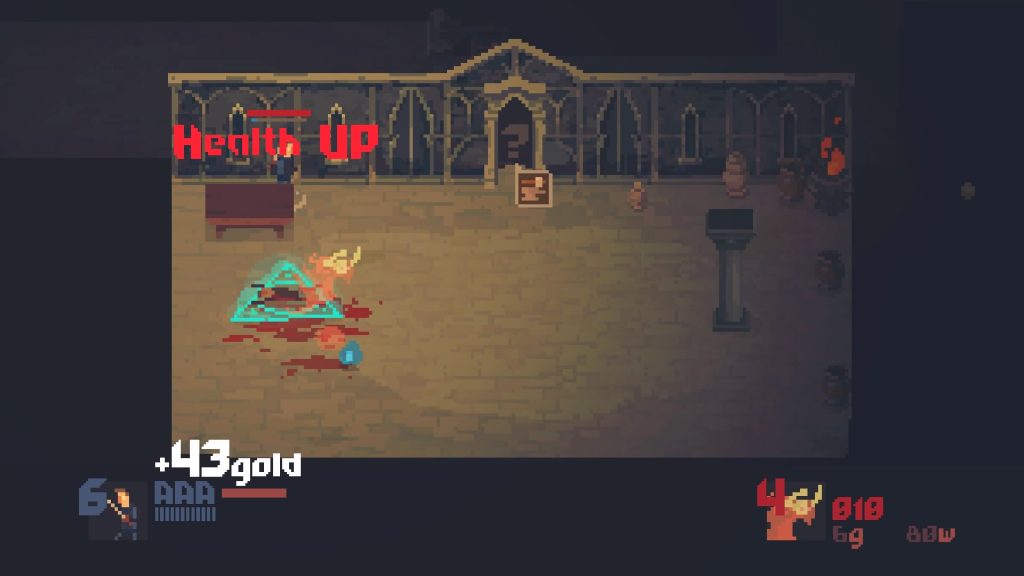 I’ve certainly been surprised by this. Roguelikes cover such a broad spectrum that I’m never sure what’s going to land in my lap. Crawl is an enjoyable scrap that clearly has taken time, effort and patience to be revised and expanded. The random nature of events feels secondary and complimentary to the mayhem. With the right group of friends, it’s an enticing night of backstabbing.

Crawl
7 Overall
Pros
+ Intriguing, adversarial gameplay.
+ Victory conditions offer an element of strategy.
+ Runs are long enough to offer plenty of twists and turns.
+ AI bots allow for some competitive single-player sparring.
Cons
- The action can be hard to follow with the blocky art style.
- Lacks environmental variety.
- The small nature of the game means you'll probably see everything in a couple of hours.
Summary
Powerhoof have managed to tweak and refine a game that executes on an intriguing premise. It can be a little hard to follow but, with a group of friends, it's difficult not to buy into the chaos. The hard turns are what this game seems to deliver well and, whilst the AI can provide some capable sparring partners, this game is best served in the company of others.