GreedFall is an action role-playing game from Spiders. They’ve released a few over the years though I have to admit I’ve not played any of them, though some did interest me. Their most recent attempt combines influences from the 17th century as well as fantastical elements and has you colonising a new, but already occupied, island. 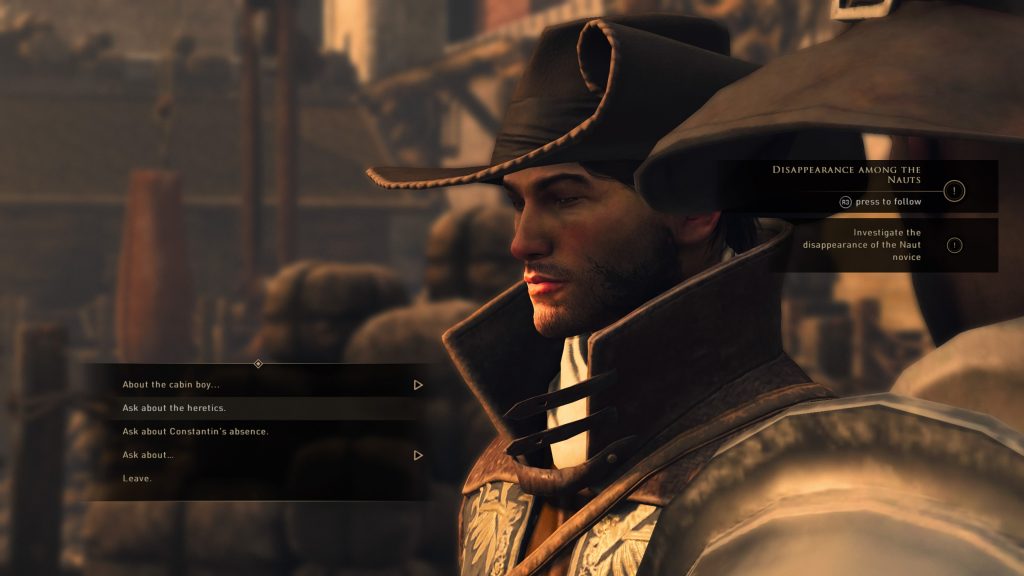 You play as De Sardet, a customisable noble of the Merchant Congregation. Your cousin Constantin has been made the governor of New Serene, a newly established city on a relatively recently discovered island and you are his legate. After a few in game hours in their home town they arrive in their new city and your adventure can begin proper.

As well as meeting all the other factions vying for supremacy on the island you’ll be hoping to find a cure for the malichor, a plague like disease spreading in your homeland. You’ll do this in a very Bioware fashion, with a little more conversation, a little less action as reverse-Elvis once said. Talking to quest givers and then finding the person who will continue your quest is the name of the game. Sometimes that will result in violence but often it won’t. As you explore locations you’ll encounter wild beasts and bandits who will attack on sight but very few quests require much violence, depending on how your character is specced.

Your stats are split into three categories. Skills will determine your abilities in battle, allowing you to equip different weapon types and be more effective when using them and use a variety of spells and offensive items. Attributes upgrade your basic stats and improves your effectiveness with certain weapons and armours. Talents is the most interesting one, as this grants you options outside of battle like lock picking, charm or crafting. Certain areas will be sealed off requiring a certain amount of vigour, science or lock picking so these abilities will help in your exploration, whilst intuition and charm will give you conversation options that you would otherwise not have access to. 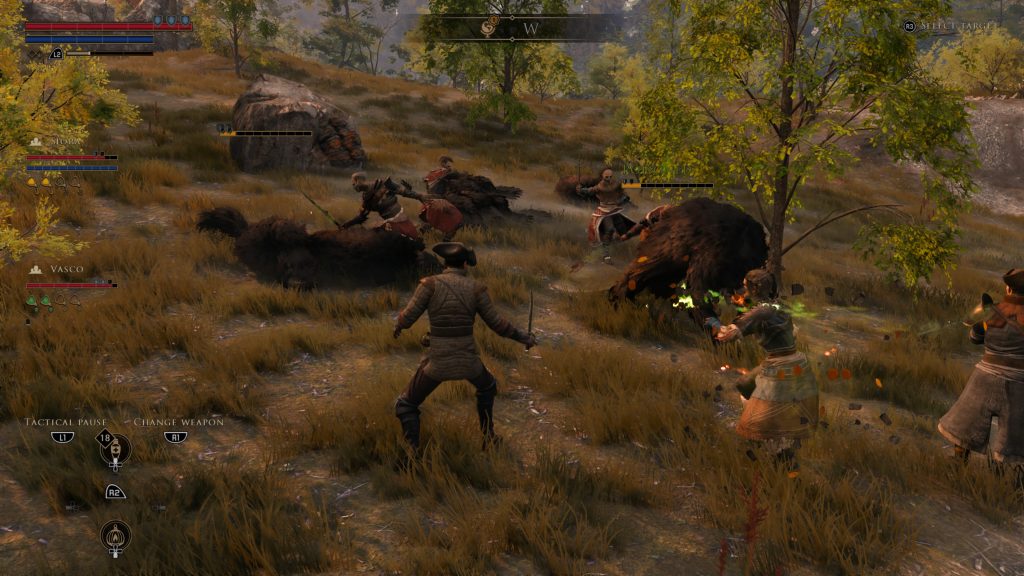 You’ll acquire points to level up these different sections from gaining experience by completing quests and defeating enemies. Each category is separate so you don’t have to choose between each one, but you won’t always gain a point in each category for every level up. It does take some of the fun out of levelling up when you have to level up a few times before you can upgrade one of your talents but levels aren’t too hard to come by so it’s not too bad.

In fact the levels come easily because the game is very easy to play. I don’t mean you won’t die, you might especially on harder difficulties, but GreedFall is one of those games that doesn’t knock you out of your rhythm. When you get a quest the objective is marked clearly on your map so you know exactly where to go. Areas are of a decent size and separated by loading zones so you’re never overwhelmed. If you do need to go to another location then the game opens a camp area where you can talk to your allies, store items or access a vendor whilst the new zone loads in the background which is very clever. Combat is in real time so you’ll enter an encounter, defeat your enemies and then continue on. Things just keep moving and ticking off quest objectives is always satisfying.

You can approach battle in a few different ways. You can sneak up on unaware enemies and get a stealth attack in to initiate the fight if you are able. From there the battle will start proper and you can attack with melee, light or heavy weapons depending on your spec, a gun (ammo is limited and it’s the 17th century so you’re not going full Max Payne or anything), magic or even traps and bombs. You have two AI controlled allies with you in your party to help you as well. I mostly focused on melee with the odd trap or gunshot here and there as these are limited and must be found or crafted. 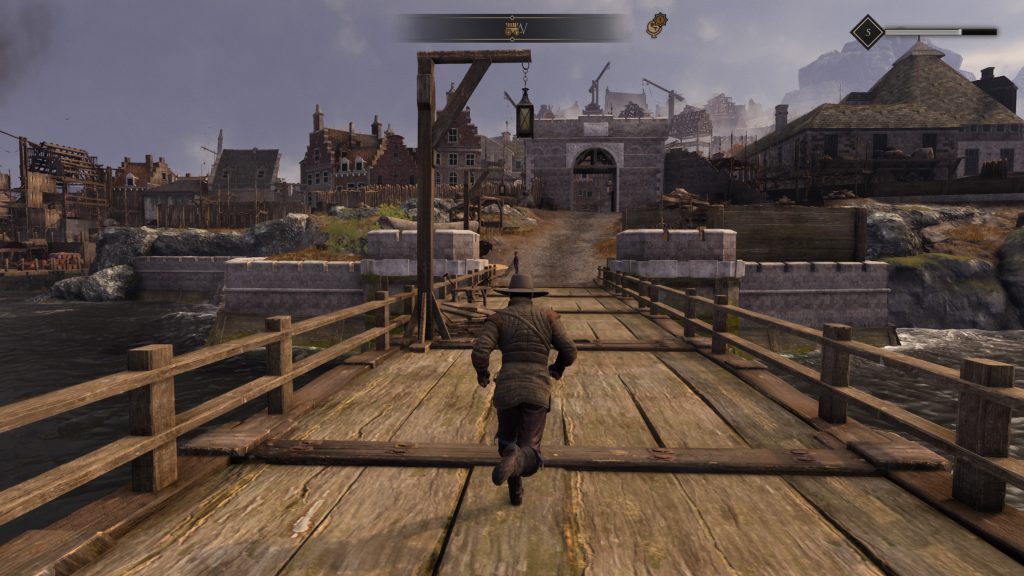 You can attack, kick to knock the enemy off balance, dodge, use a powerful fury attack which builds and block. I put block last because it’s the best. Blocking blocks damage, obviously, but it also builds your fury meter. If you time the block right then it’ll parry which means you’ll negate damage, build meter and put some damage on your opponent. It pretty much makes you invincible. You can be surrounded by enemies, both your allies down, and as long as you keep pressing block you’ll come out on top as there’s no stamina to worry about. I won’t say it makes the battles trivial, you still have to pay attention and if you want to get some attacks in you need to time them well but I’ve certainly won battles I probably shouldn’t have thanks to this technique.

I don’t mind that at all though. The combat is enjoyable enough and, again, doesn’t interrupt the gameplay flow. It also helps that the game runs well and looks decent. The character animation and acting show the less than AAA budget but you’ll see some nice lighting and solid visuals as you run around, minus the odd glitch. Voice acting is so-so, not stellar but nothing terrible either and your allies are interesting and you’ll meet some other likeable (or not) quest central characters too. Anyone who isn’t important has nothing to say pretty much which does make the towns feel a little lifeless but, again, it just means you’re not getting bogged down talking to people who don’t matter.

Although the characters were enjoyable I have to say at no point was I propelled forward by the story. I was ticking off objectives or exploring, not wondering what was going to happen next in the narrative. I don’t think it helps that apart from in some major cases you don’t have a lot of input in the story or how De Sardet handles things. De Sardet has his/her personality already and things generally end in a set way, it’s just whether you do things with diplomacy or violence. Usually if you do things one way you’ll gain favour from a faction whilst doing things another will lose some, which is a bit black and white. Although it has Bioware similarities this is not full of narrative options. 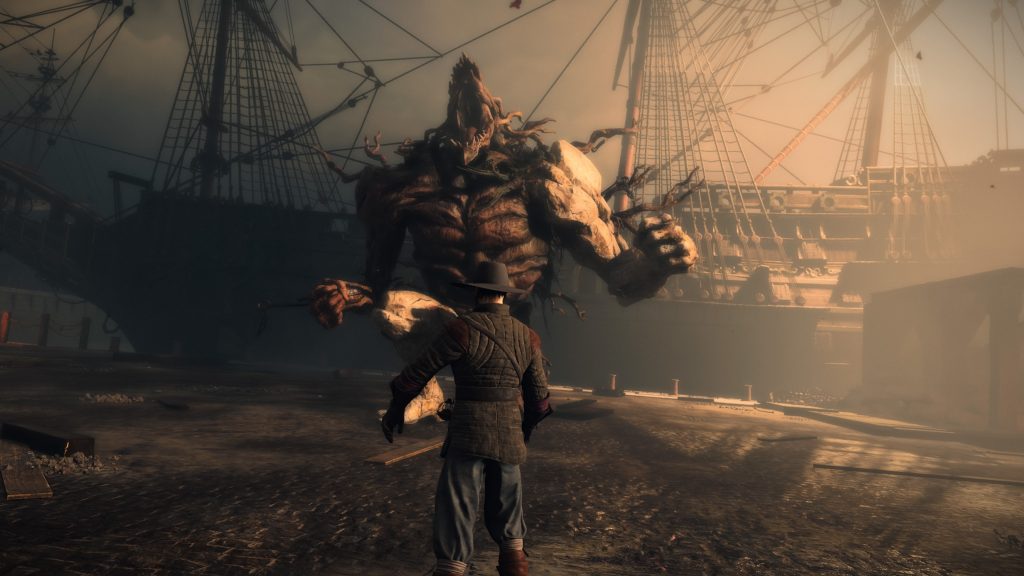 That didn’t stop me enjoying my time with it though. Like I said, it’s just an easy game to play through and if you’re looking for a decent length RPG to spend some stress free time in then GreedFall is fine. It’s not top of the class in any regard but neither are their any major faults that bring the game down. It’s a game you’ll forget about and then, a few years down the line you’ll see it mentioned somewhere and go, “Oh yeah, GreedFall. That was an enjoyable game” and you won’t be wrong.

GreedFall
7 Overall
Pros
+ Completing objectives is as enjoyable as ever
+ Runs very well
+ Character talents make exploring interesting
+ Variety in character builds
Cons
- Character is who s/he is, not much player influence
- Story didn't grab me
- Block button is probably overpowered
Summary
GreedFall is the very definition of a decent action RPG. It does nothing drastically wrong but doesn't blow you away either. What it does manage is to be an enjoyable experience which is sometimes all you need.