Okay, I don’t think when I started this job, dating sims would be on the menu. Least of all, Kaichu: The Kaiju Dating Sim. Coming from Squiddershins, this wholesome effort may be light on gameplay but delivers some cute, charming moments. The premise is real simple. You play as Gigachu, a giant dinosaur looking to find a better half. With a mate in mind, you can walk hand in hand as you smash up the world’s most famous monuments. A nice idea in practice, although a little short on time. 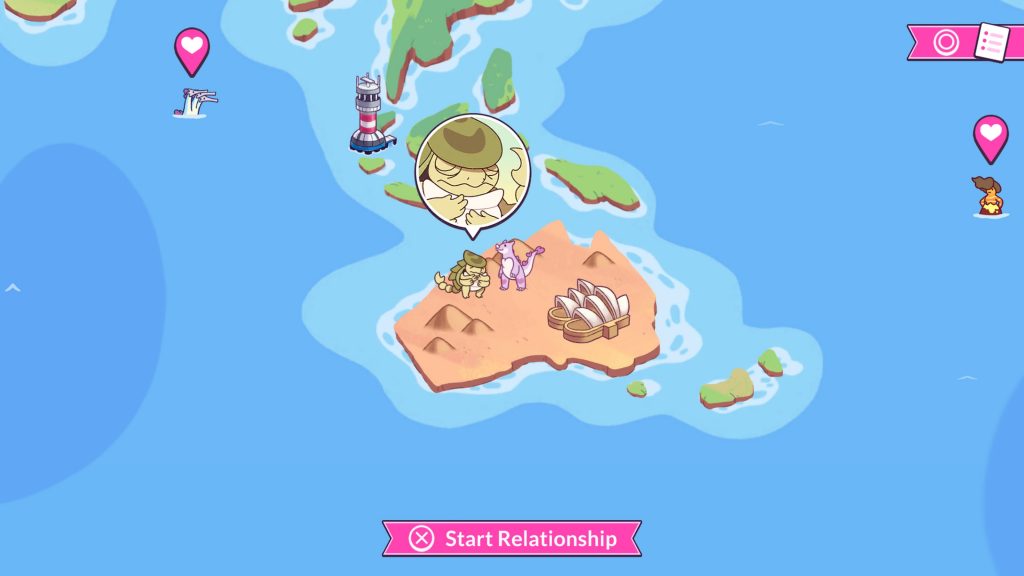 Right off the bat, there is a lovely cosiness to Kaichu: The Kaiju Dating Sim‘s visuals. You travel the world with your date and the map looks bright and cheery with dozens of famous landmarks to destroy. The character design is wonderful with plenty of charming touches. There’s a lot of personality here and it’s needed as Gigachu starts their quest.

The narrative is often framed as news reports. Rather than a distressed populous running for their lives, the watching audience seems engaged with Gigachu’s longing for a companion. These news reports are often generously packed with puns and the smattering of voice acting does well to add to the very relaxing tone. It’s playful, doesn’t take itself too seriously and, at times, it can give insightful commentary about Gigachu’s relationships.

There’s a three act structure in which the military inevitably gets involved. They clearly don’t approve of the wanton destruction and possibly the inter-species breeding. It culminates in a scrap with a robot third wheel who ultimately looks to block your advances towards a happy coupling. In all, each romance will probably take twenty minutes to finish but there’s six potential soulmates who each have different personality traits. 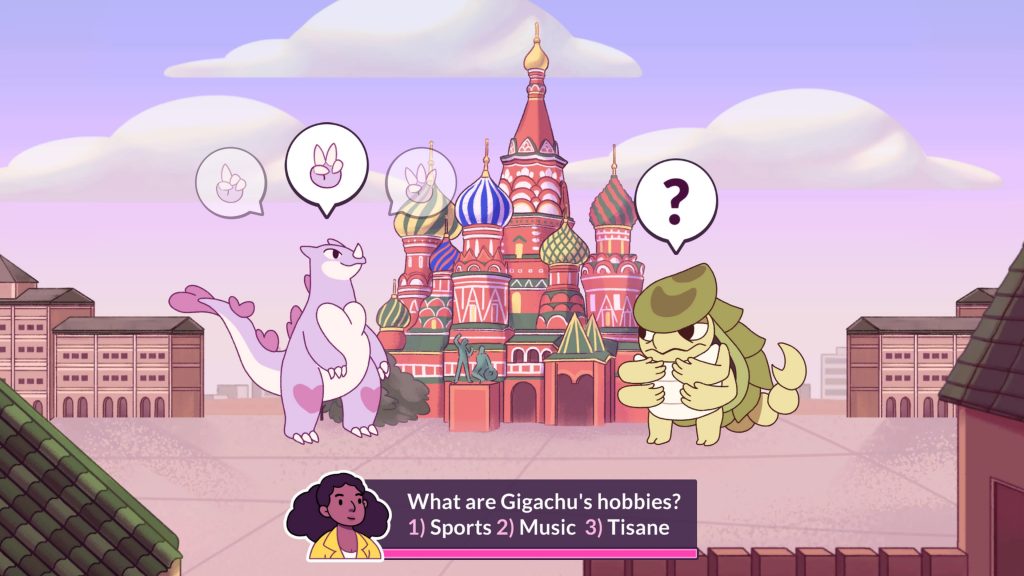 So how does Kaichu: The Kaiju Dating Sim handle it’s dating? Well, it takes a break from the traditional meter management and gift buying that other dating sims tend to trade in. Once you’ve picked your pronouns and a love interest it takes on the form of a speed date. You’re asked a series of multiple choice questions and how the other monster responds will indicate how well the date is going. These compatibility questions really let you know what makes your current flame tick and it can be satisfying to ace the exam.

It’s a little barebones mechanically but the questioning does tie in neatly with the monsters’ various personality types. If they’re timid, they’ll more likely respond to middle-of-the road answers, extroverts like to be right out there. Your responses can either be considered bad, good or great. Positive answers see the landmark you’re visiting being smashed to smithereens in some quite affectionate vandalism.

You’re not short on feedback from the news crew or other Kaiju. The personalities at play are pretty straight forward and it’s nice to see the game stick to a message of compatible relationships. It’s very wholesome and, whilst some of the answers seem obvious, there can be a little mystery to the dance of courtship. 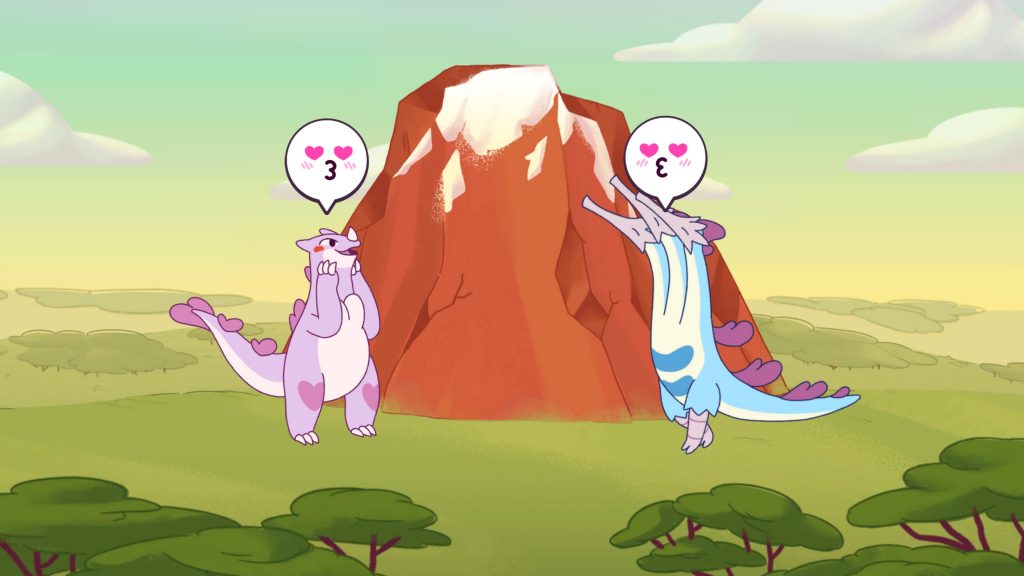 I find the opening act to be fairly easy. It’s an icebreaker and, like I’ve said, they’re not really trying to trick you with bipolar opposition. One answer is usually defined as great, one is good and one is outright bad. In these opening rounds, two of them is good enough to advance to the next date. You have a positive and negative meter to track. Once the former is full, you and your accomplice can wander onto the second act.

Here is where deal breaker questions are introduced. The dates continue in the same format but the final question appears to take on more significance. I find whole dates will hinge on them so getting a correct answer can feel more crucial than in the first stage. It can be a little annoying to see a successful date turn on one misstep. As long as you’re paying attention, you’ll mostly avoid disaster. Alternatively, you could always rollback to a previous save. In times of crisis the game will allow you a safety save.

In the third act, you’re putting together everything you’ve learned for one last stand. Mechachu arrives to break up the party but now they act as quizmaster for the conclusive act. Should you fail this, you have a second shot at redemption. Gigachu’s moment of contemplation allows you to gather advice from the other monsters. Here the traits you’re after are spelled out quite clearly, giving you something on an open goal. Whilst it does mean there’s not much challenge on offer, I don’t think the game really set out to do that. It’s more a comfy parable of how relationships should go. 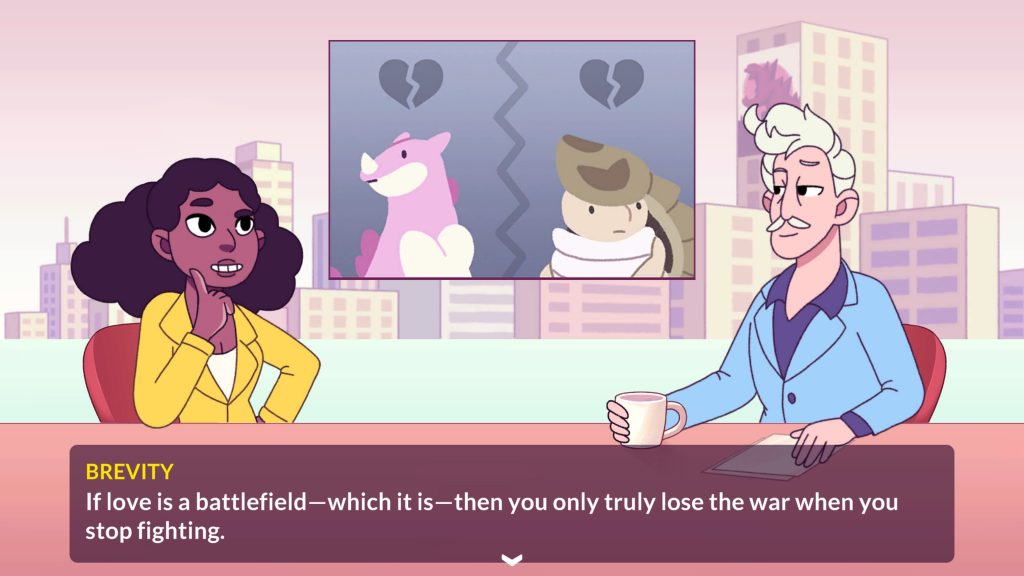 Visually, I find Kaichu: The Kaiju Dating Sim pretty charming. It has a really simple style that manages to convey a cosy atmosphere. The beasts you can romance have an adorable demeanour and their responses to great answers put a smile on my face. The news team is really supportive and their little monosyllabic responses give the game a relaxed vibe. The music is equally comfy with a soundtrack that is fairly easy to listen to.

It’s been a joy to look at the pastille tones and vibrant, hand-drawn artwork. The whole package just seems very charming and delivers a nice message. Whilst there’s not much gameplay to really dig into, it lets the writing do some wonderful work. It won’t really take long to see it all but the lovely, warm tone of Kaichu: The Kaiju Dating Game is a wholesome thing to witness.

Kaichu: The Kaiju Dating Sim
7 Overall
Pros
+ Really cosy presentation.
+ Has a wholesome message about dating.
+ Charming music.
+ Lovely writing with plenty of puns.
Cons
- Deal breaker questions can undo a great date.
- Can be really short to fly through the story.
- Light on gameplay.
Summary
What a wholesome thing Kaichu: The Kaiju Dating Game is. Whilst it is essentially a dressed up compatibility quiz, the message it's trying to send is a delightful one about finding the right person to gel with. There is a cosy tone throughout and the artwork is cute whilst conveying plenty of personality. It's very light on gameplay and can be a quick experience. Still, it's absolutely charming with a lot of whimsy.