It’s been interesting to see puzzle games find their way into my rotation lately. A lot of them have been of an indie persuasion and they haven’t been especially enduring. A puzzler with a good hook or some interesting ideas will always grab me and In My Shadow manages to fit the bill. Coming from Paybae, this charming platformer about a growing girl does deliver an enjoyable puzzle platformer. 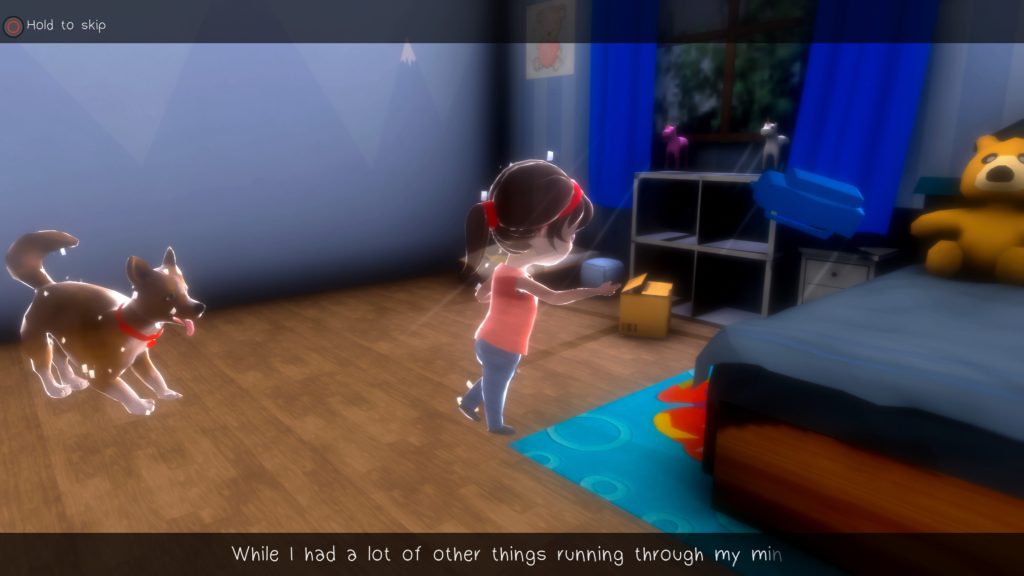 The narrative of In My Shadow centres around Bella. She’s a young woman about to leave the old family home and the story focuses around her reminiscing of her time there. The memories of good and bad times come flooding back and each room of the house reminds me of different relationships with pets and family.

Whilst the plot is very introspective and does capture the feeling of a child growing up into adulthood, it just felt a little too mopey for me. Bella spends her time almost exclusively feeling sorry for herself over things that I don’t feel warrant that kind of response. Maybe I’m out of touch but it does feel overdone and hammered home a little too heavily.

There’s a nice progression to In My Shadow. Each room of the house introduces new mechanics and new dangers. Some obstacles are brittle so you have to consider their placement based on how long they’ll stand up to punishment. Some objects can be rotated and moved freely whilst some are more restrictive. When these are introduced, it does allow me to think more about placement and just what needs to be where before I proceed. It’s a challenge but not one that I found especially foreboding. 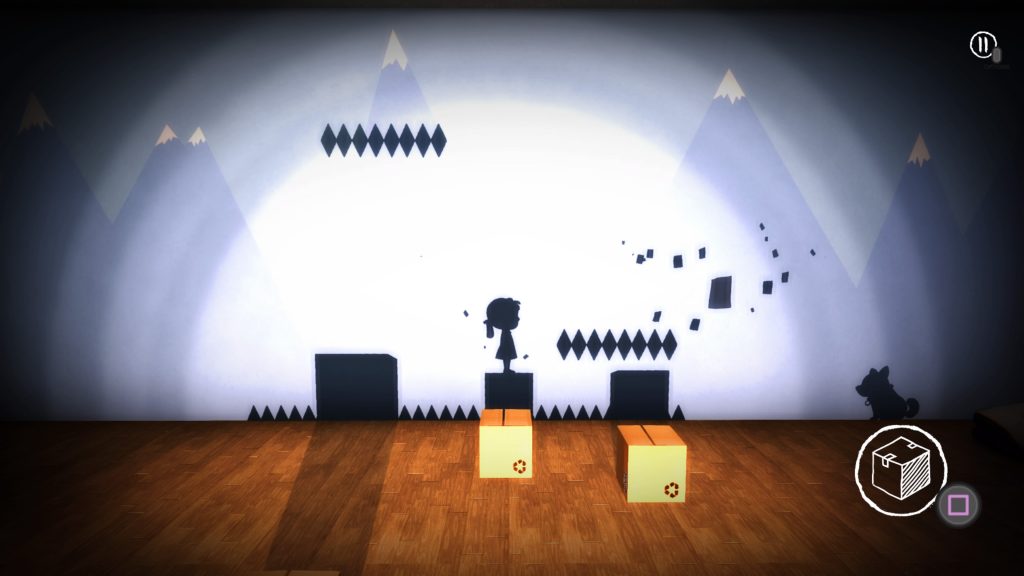 The controls feel consistent and responsive. Bella moves on a two-dimensional plane and has a basic jump. Things are kept really simple but preparing the platforms in advance is where the puzzle truly lies. As the title suggests, shadows play a huge part in things with the room’s furniture casting shadows on the wall. The objective is to move Bella safely from one side of the wall to the other with the assistance of these shadows.

Furniture can be moved into new positions and rotated to give Bella the platforms she needs to pass obstacles. These obstacles largely come in the form of spikes and these are to be avoided. En route to victory, you also need to collect these fragments to progress to the next stage. The goals are kept pretty simple and it’s pretty simple without being too taxing.

Solving puzzles has an improvised feel. Whilst you can be precise with moving furniture, there’s enough movement in Bella’s jumps to have just enough room to experiment. It might not be the case but I feel there’s multiple solutions to the majority of the rooms. This might tighten a little as more elements and hazards are added to the scene. 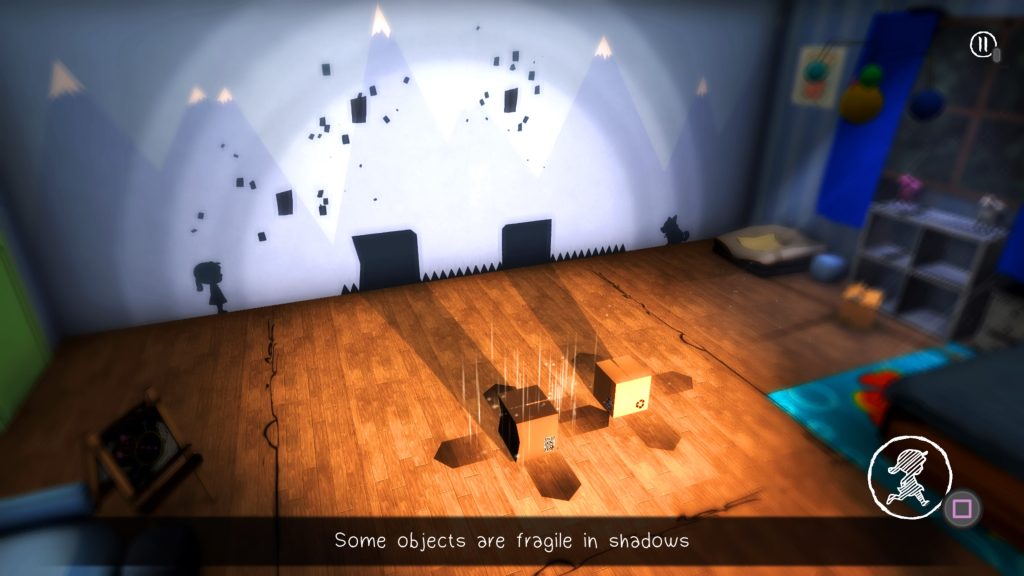 If there’s one thing I disliked it was the introduction of obstacles that cast no shadow. Making them effectively invisible made it really, really hard for me to judge where they’d be on the wall. It results in more trial and error than I’d like to admit and, because I can’t see it, I have no idea if the spikes ahead are moving or stationary. Some puzzles do at least hint at their position but just a few times I felt I was taking leaps of faith to succeed.

If things do get too much, it’s nice to know the penalty for skipping levels is minimal. You might miss out on some trophies but you can progress the story and most of the associated trophies. It’s nice not to be punished when you can’t quite get a handle on a puzzle or have it figured out but lack the execution. And I don’t see In My Shadow as particularly execution-heavy. I find it does ramp up greatly in the last couple of puzzles but, for the large part, positioning the bric-a-brac is where the grey matter is given the workout, rather than movement with Bella.

It does make me appreciate the puzzle design and it gives the player a lot of room to think and tweak theories. Restarts are quick and getting from one side of a room to another is a matter of seconds. It’s a game about planning and I feel that really helps take the sting out of any potential frustrations.

Visually, I find In My Shadow to be very reminiscent of Limbo. It’s an easy comparison to make with both games featuring silhouetted children. Thankfully, this is nowhere near as macabre. It’s fairly stylised with young Bella and her brother in all their big-headed cuteness. The character models can look a little rough around the edges but it’s a consistent look all its own which does hold things together well. 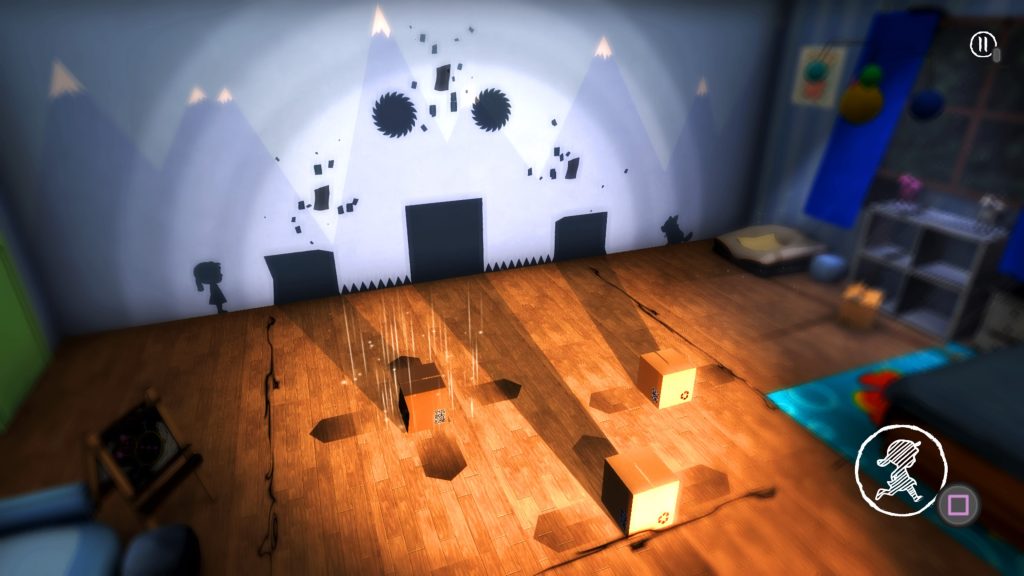 The rooms are nicely lit and look fairly polished. They’re small environments but they’re detailed and have plenty of care taken with them. It does also hammer home a house that is, effectively empty. The music is a fairly light piano score that seems to settle with the downtrodden aspects of the narrative. It’s fine but a little bleak at times.

Despite my reservations about the game’s mood, In My Shadow is an enjoyable brainteaser. Bella’s story is relatable, if a little dreary and the game’s environments look fairly polished. It’s refreshing to see a game allow you to skip levels without penalty but there’s nothing too tricky on offer. It’s a game worth persevering with as the inventiveness of the puzzles ramps up.

In My Shadow
7 Overall
Pros
+ Interesting premise with inventive puzzle design.
+ Responsive, consistent controls.
+ Skipping levels without punishment is welcome.
+ Lovely visual work that helps make the rooms memorable.
Cons
- The narrative is a little too dreary for my tastes.
- Invisible obstacles lead to some unwanted trial and error.
- The piano soundtrack fits with the melancholic narrative.
- The character models are a touch rough around the edges.
Summary
In My Shadow does succeed on most fronts. As mopey as the narrative can be, the puzzles are thoughtful but not too tricky. There's a good momentum to the game's handful of rooms and the controls behave fairly consistently. Being largely unpunished for skipping levels is a welcome bonus but a full run shouldn't hold players up too much. It's inventive, enjoyable and not too taxing.