GigaBash is a multiplayer-focused action brawler from Malaysian studio, Passion Republic.  Mainly melee-focused (albeit not exclusively), this crazy party game feels like a mix of Smash Bros. and Powerstone but with a satisfying cast of Kaiju and Kyodai archetypes stomping around creating chaos in deliciously crumbly environments.

With the influence clearly being the early monster movies from Japan, this game sets these giants and titans against each other in destructible enviroments where everything can either be demolished or used as a weapon.  A handy tutorial takes you through the basics but it’s worth paying attention to as while this game isn’t weighed down with the move set of a Tekken game, there’s still quite a few things to learn if you want to survive. 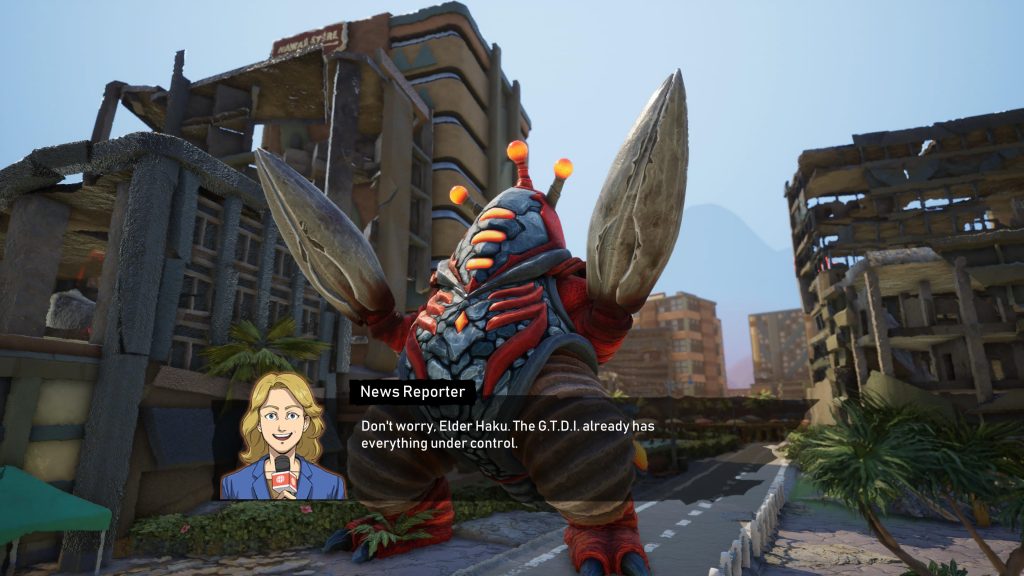 Each character has light and heavy attacks, each of which can be charged, as well as special moves, dashes, blocks and jumping attacks.  Each character’s move set is different though with some relying more on ranged attacks or special abilities, while others just need you to get in range and spam strikes before your opponent can get away.  As with any game of this type, you’ve got healthy energy bars that take a while to chip away but we found that battles were quick enough to not drag out.

Enemies can be thrown into, and through, buildings and buildings can be picked up and thrown into enemies.  Sometimes human forces get involved, pestering you with heavy tanks and missile launchers.  These can be thrown too or even held and used as ranged weapons.  It’s all very well-considered and complex enough to be interesting without overdoing it. 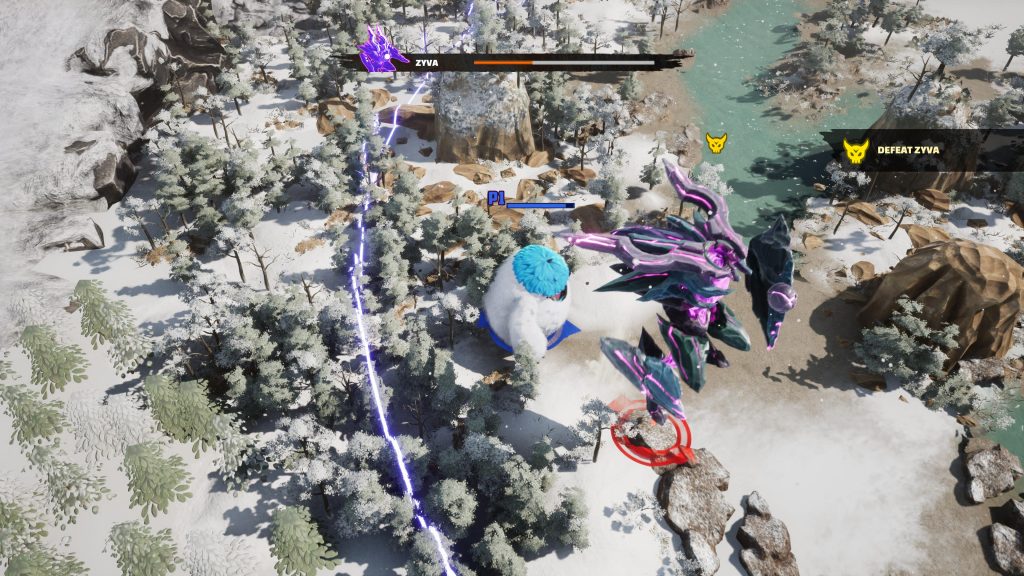 Between the range of moves you have, and the number of things you can use as weapons, GigaBash is certainly fun to play.  It’s almost more fun to just try out each character to see what they are capable of then it is to play the game properly but it is all enjoyable.  That said, the combat can feel a little clumsy and imprecise which is often the case with these sort of crazy party brawlers but even more so when you’re controlling monsters that are the size of buildings although, unlike other Kaiju games, the characters here move just about quickly enough to not feel like you’re watching a bad wrestling match on TV.  You just about get the sense that these are gigantic creatures but the zoomed out camera means that they never seem enormous.  That’s the trade off though between things looking epic (like in the 2014 Godzilla game) but not horribly slow (like in the 2014 Godzilla game) and getting it right might not be possible outside of an Earth Defence Force game.

While the game does somewhat live and die based on its multiplayer options, before we get into all that there is a solo mode.  Here you get to play through four campaigns, each focused one of the kaiju each.  These are reasonably fun and mercifully short.  You’ll get through all four in two to three hours but they do introduce you to some of the lore of the game and are fun to play through if a little samey.  They do occasionally throw in other objectives but, for the most part, you’ll usually just be fighting another monster for most of the campaign levels. 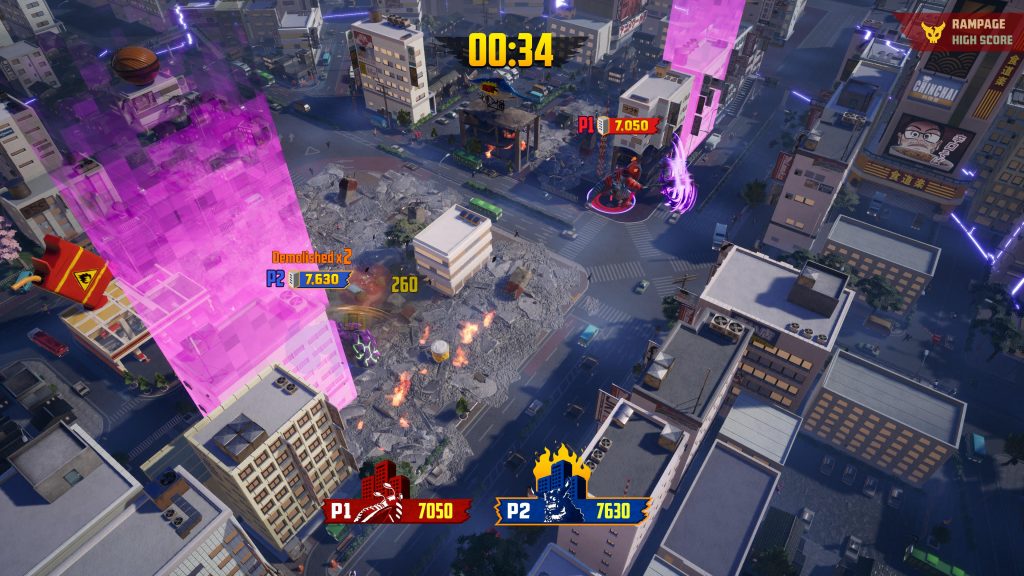 In terms of multiplayer, the game is clearly best enjoyed with four players locally.  Now, this being 2022 and not the ’90s, you might struggle to get three others to sit down and play a fairly obscure game like this (especially as Covid is still a thing) but the AI can fill in for any gaps on your sofa (although on the harder settings, the AI will most likely dominate you).  There’s also online play but that relies on an online community sticking by the game, not something you can guarantee.  But if you can get other players involved there are a bunch of modes to play either based around just battling each other to the death or messing around with some of the minigames that GigaBash has to offer.

Everything is presented in a slightly cute, colourful style which gives the game a cartoon-y feel.  We think that maybe we’d enjoy if the game was presented a little more earnestly while not hiding the overall rubberiness of the monsters , like the old Kaiju films that inspired it, but the visuals do a good job of keeping up with the action even if we’d prefer a slightly more responsive character.  Sometimes you can get a bit confused as to which monster is yours and the direction you are facing but that’s the price you pay when you’ve got loads happening on screen all at once.  I mean we played 600+ hours of Earth Defence Force 2029 so we can take a few visual compromises in the name of chaos and fun. 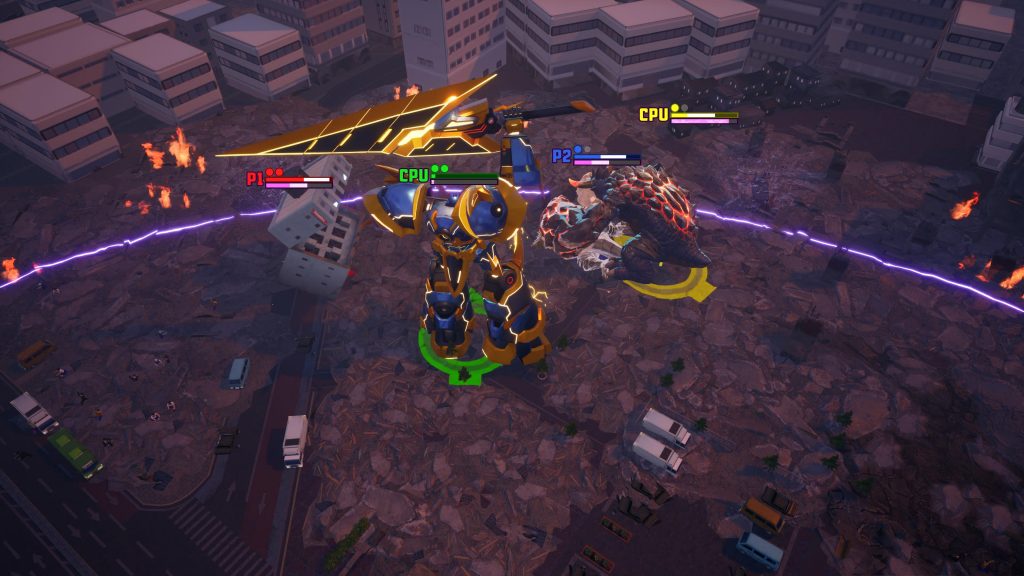 With its wild mix of characters, destructible environments and fun gameplay, GigaBash is a really fun, but polished, mix of Kaiju mayhem and fun party game gameplay.  If you can regularly get three mates around, especially ones who don’t just want to play sports games, then this game is easily one of the best couch multiplayer games on PSN.  The solo and online modes offer a bit of flexibility too but the fun factor drops as the player count does.  But overall there’s a lot to like about GigaBash.

GigaBash
7 Overall
Pros
+ Fun cast of characters to play as
+ Offers solo, local and online play modes
+ Destructible enviroments
+ Good visuals and music
Cons
- Needs other players
- Solo campaign might be too short for some
- Would have benefitted from a solo arcade-style mode
- Combat is a little clumsy
Summary
If you put 40 meter tall monsters in a fully destructible environment and have them duke it out, you're in for a good time no matter what and this party game gets that stuff right. However, to really get the most out of GigaBash, you'll need a sofa full of mates to play it with.