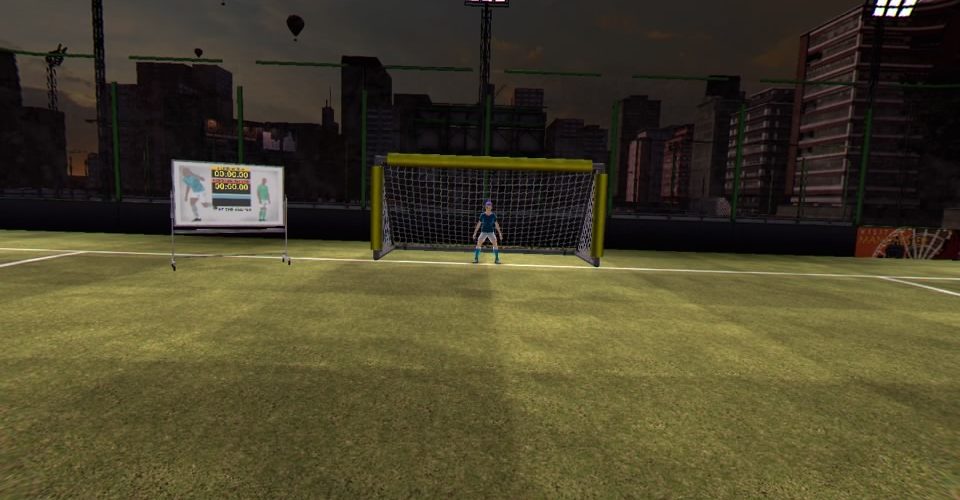 From CherryPop, the people who brought us Sports Bar VR, comes VRFC: Virtual Reality Football Club which brings the beautiful game to virtual reality. Obviously something as complicated as a FIFA or Pro Evo would be very difficult to do at this moment in time but with Rocket League being one of the purest representations of football can VRFC find that balance between simulation and simplification?

You’ll need two Move controllers for this, one in each hand and right from the off the game has you running through the tunnel and onto the pitch. You do this by pumping your arms up and down, much like the recent Sprint Vector. If you hold in both triggers the run turns into a sprint that is managed by a stamina bar that shrinks as you use it. It works very well and despite moving at great speed I didn’t feel motion sickness at all.

There are multiple tutorials to play through to get the hang of the controls, the first simply being movement based. Running in a straight line and sprinting is easy, if you press the Move button on the top of the left controller then you can strafe left whilst pumping your arms, same for the right controller and if you hold both in then you can run backwards (which does feel weird and made me almost lose my balance a couple of times). If you press the

button on the right controller (top right button) you can turn right.

Those are your movement controls so you can run around the pitch, but what if you’ve got the ball at your feet? Each Move controller controls each foot, so you can dribble by just knocking the ball in front of you as you run. If you want to strike the ball you hold the trigger on the boot you want to use (right Move controller for a right footed shot) and swing at the ball, some physics come into play allowing you to keep it low or swerve it. To pass to a teammate you hold

for the left controller (bottom right button) or

on the right controller (bottom left button) whilst striking the ball and a more controlled kick will occur. Then there are a a couple of options for helping you keep track of the ball.

on the right controller will centre the ball in your view, turning you around if it has to whilst

on the left controller activates ‘Dribble Assist’ which, within reason, tries to keep you running in the direction of the ball without making you puke.

The kicking of the ball is fine with the tutorials putting you in a few different situations to help you get acclimatised. Running towards the ball whilst in the heat of play is a different matter, with a combination of centring your view, toggling Dribble Assist on and off and manually rotating your character (which you can’t do whilst Dribble Assist is on) requiring quite a lot of thumb movement and thought to get your head around. 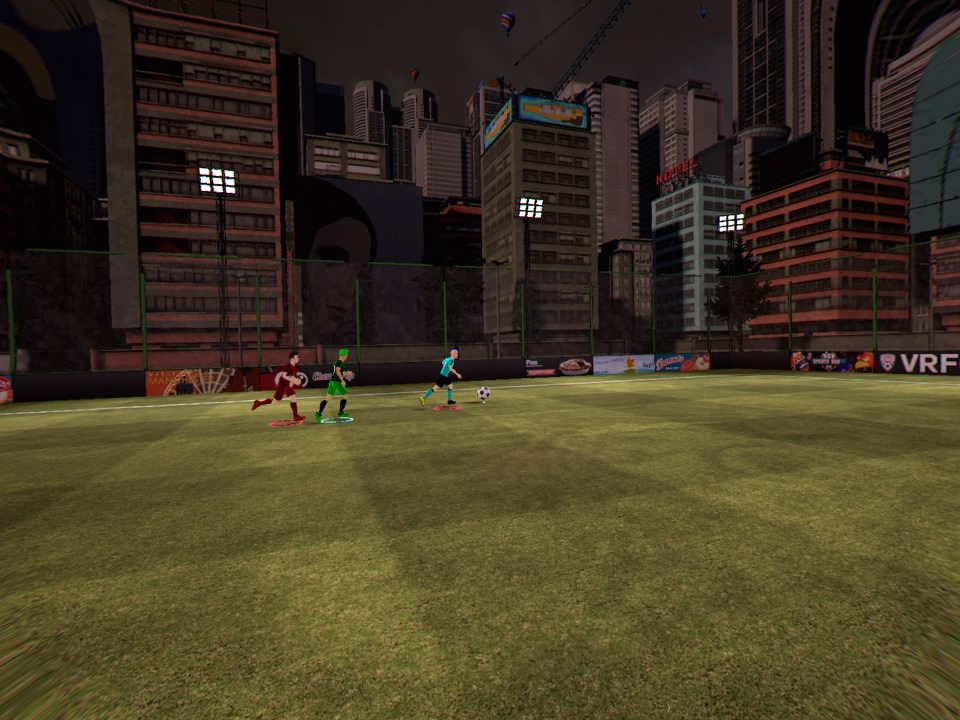 Once you do play through the training you can customise your avatar, changing gender, face, hair style and colour and the style and colour of your kit with more options unlocking as you level up. From here you have two options: go into Freeplay and run around a pitch by yourself, shooting at goalkeepers in either goal or to go online. There is little to no single player content at the minute, though CherryPop are working on it and with the amount of work they’ve put into Sports Bar VR I believe they’ll do it.

When you jump into a lobby you’ll be put onto a practise pitch with others running about and chatting. You can have up to four players on each team with an AI keeper in goal and it plays out like a simplified version of the full game, much like 5-a-side. The ball can’t go out of play, it hits an invisible wall and bounces back, the keeper never leaves their goal line, basically just moving left and right with the play and the game lasts five minutes. From here what happens depends on the people you are playing with.

Generally speaking, if you’re in a reasonably full lobby then someone will stand near the opponents goal, hoping for others to do all the work so they can take all the glory, you may get someone hanging back a little, maybe around the half way line to try and clear up if the attack doesn’t work out (usually me) and everyone else will run after the ball like a bunch of seven-year-olds on the playground. You’ll often see groups of three or more players squishing the ball against the boundary, trying to kick it loose so they can chase it up field.

Being VR there is no collision between players as this would induce nausea so there is no concept of shielding the ball and tackling just equates to running through the back of someone and stealing the ball off their boot as they stop to kick it. It’s a bit silly and isn’t helped by the lag that is obviously present. Often you’ll go for a tackle only for the ball to roll out in front of you and as you go to get it it vanishes as the game catches up with what actually happened. A quick press of the

button will point you in the right direction again but it’s tough to imagine getting really good/skilful at the game when the ball is so unpredictable and the most effective players are the ones running around like headless chickens. 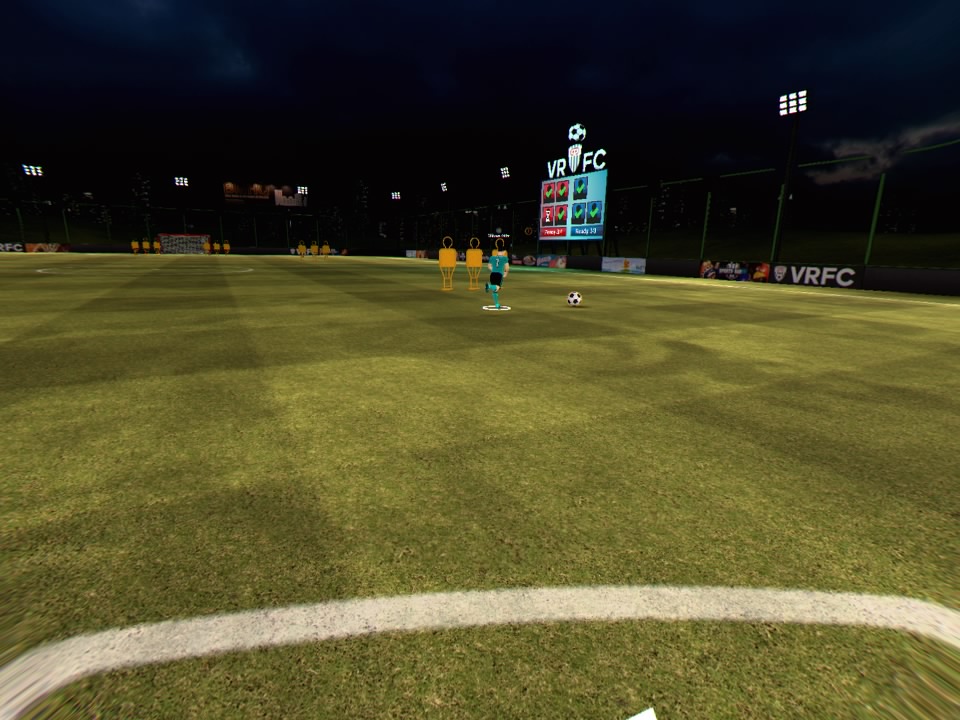 Sure you can pass to teammates but people rarely do and it’s understandable as receiving the ball with your back to the direction you want to go is incredibly difficult to rectify so you end up trying to get the ball from out of your feet and rotating your character whilst your opponent runs straight at you and closes you down meaning the best form of attack is to just run.

I’m not saying it’s not fun and I’ve had a laugh with a few strangers whilst playing it but it doesn’t particularly feel like football. It’s fun in a quite manic way and when someone scores a good goal or does make a good interception or pass then it’s worth pointing it out but more often than not you’ll be just chasing the ball like a mad man and whoever does that better wins. I’m sure there may be a team of four out there that play together and have positions and tactics that would tear any team of strangers apart but in my time playing it the only thing that wins games isn’t playing smart but accuracy in front of goal when/if you get your chance.

I would be surprised if there was a team of four out there though as the online is unnervingly quiet for a game that’s just launched. It is crossplay with Oculus and Vive, increasing the player pool, but although I have been able to get into games in the evening they have rarely been full with matches of one on one and two on one not being uncommon. It’s a shame, especially as there is no single player content at the moment to keep you occupied when you can’t find anyone else.

It’s also worth pointing out that this is a workout. Every time I’ve played my shirt has been drenched in sweat and constantly pumping your arms for five minutes is tiring. A lot of the team chat you’ll hear will just be heavy breathing and squeals of effort as people try to go that little bit faster to get onto the ball. You don’t need a lot of space however, though the game does want you to stand in a specific spot. 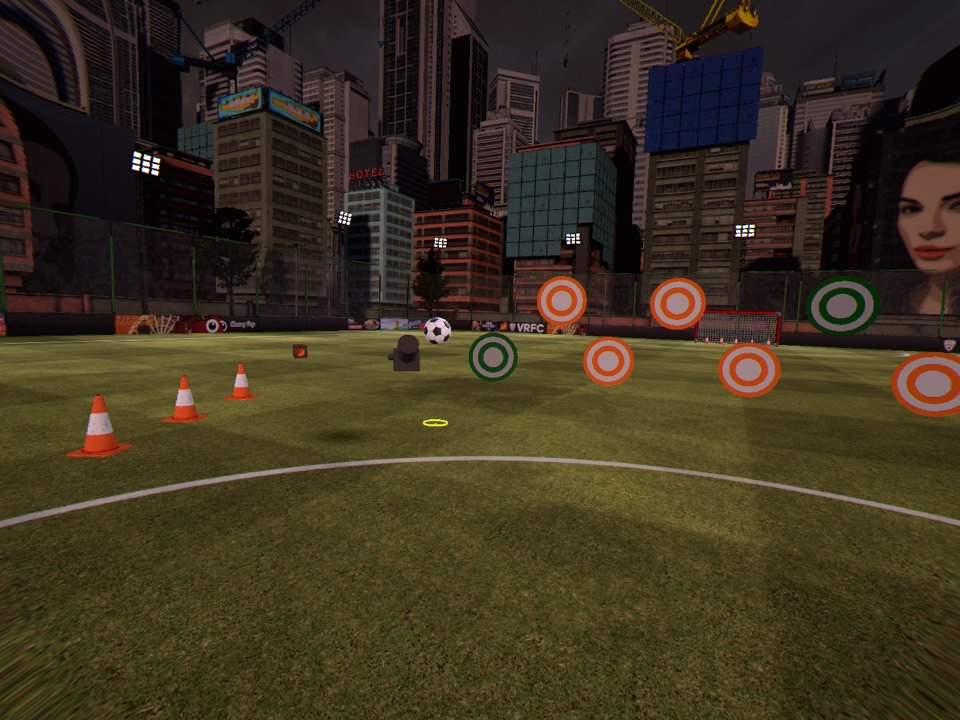 So I come away from VRFC a little disappointed because I hoped for so much. A lot of the problems I have are down to the infancy of VR itself which removes the contact sport nature of the game and the lack of satisfactory control, whether that’s to get running in the right direction or finer ball control (I’d love to be able to do keepy uppies but the game doesn’t give you that much finesse). The lack of single player content, at least for now, means you’re reliant on the online community which is fairly sparse at the moment. Once you’re in a decent sized game however there is fun to be had and the thrill of scoring a goal is always there, but you shouldn’t think of it as an accurate representation of the real thing but rather a simpler game which just involves kicking a ball with your feet (which you control with your hands).

VRFC
7 Overall
Pros
+ Dribbling with the ball at your feet feels great
+ Scoring a goal is cause for celebration
+ How you strike the ball makes a difference
Cons
- No single player at the moment
- Doesn't quite fully convert the beautiful game to VR
- Online is quiet and somewhat laggy
Summary
VRFC does an okay job of representing football in VR. The lack of single player, for now, is disappointing but running down the pitch with the ball at your feet and the goalmouth in your sights is thrilling. It's the infancy of VR itself that stops this becoming a true football experience but there is still fun to be had if you can find a game.