Reviewing sports games can be a tricky business. Year on year, they arrive with you needing something a subtle focus, rather than looking for the big changes. Pro Evolution Soccer has felt like that for the last couple of years. Konami’s flagship football franchise has enjoyed critical, if not quite commercial success in recent times. Is this year promising enough to keep a positive trend rolling on? 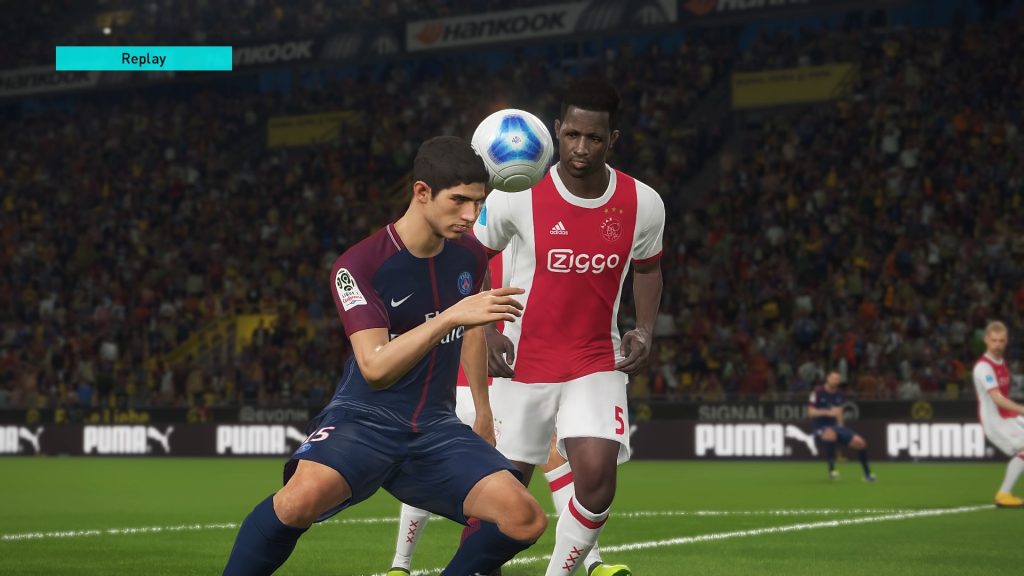 The sport itself is, once again, nicely represented. They’ve continued to do great work with the Fox engine with player faces and models being a highlight. The cosmetic differences between last year’s effort are small but noticable. Turf’s more detailed this year and there’s been a subtle lighting change. They’ve taken a little more care with the presentation, too. Last season saw the introduction of some club partnerships which were put to great use.

In addition to those collaborations with Barcelona, Liverpool and Borussia Dortmund, Fulham have joined the fray with some PES-branded kits. No Craven Cottage but, in the absence of the licensing clout of EA, they can at least focus on authenticity in other ways. Some of Europe’s major leagues are represented with league-specific idents introducing a league season. It’s nothing major but a step in the right direction as they try to bridge the gap between FIFA’s stellar presentation. 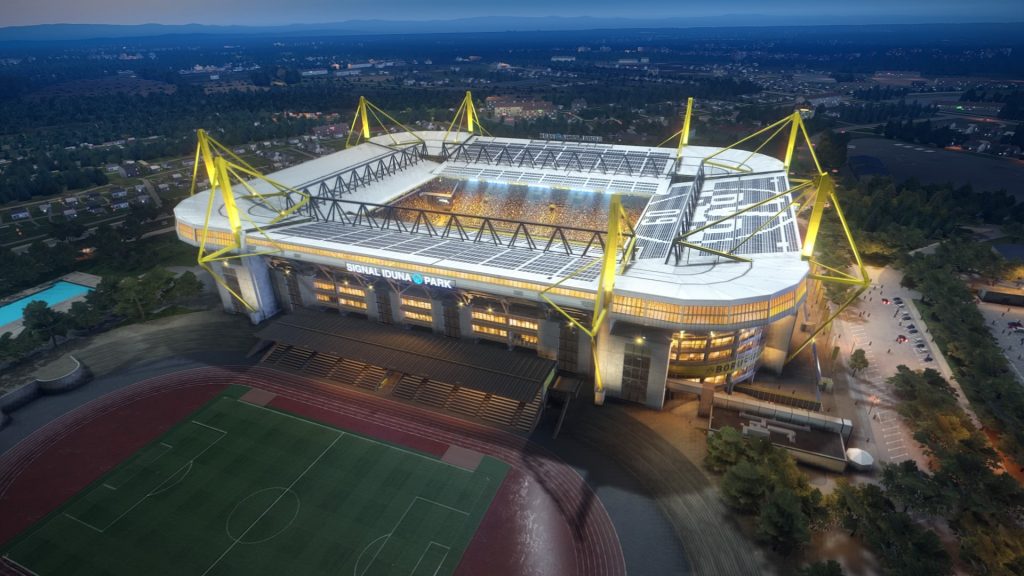 Champions League and Europa League licensing remains with all the bells and whistles that entails. Sadly, there’s no new leagues or cups to speak of. The Chilean league returns for another season but the Copa Libertadores remains absent. The La Liga license appears to have also expired. You visibly see the issues Konami have with licensing and it’s a shame they can’t add to what they already hold. At least the comprehensive editing suite remains intact. Expect the community at large to produce some fantastic work to bring the unlicensed teams back to reality.

Commentary remains a little stagnant with excitable John Champion accompanied by a terrified Jim Beglin. There’s some added lines which go well with the action but Jim remains scripted and a little lifeless. It’s no slight against the man, working off a script when you’ve been spontaneously adding insight on camera is a discipline some professionals can be pole-axed by.

On the pitch, there’s a feeling that things have been tweaked rather than revolutionised. There’s some qualify of life improvements like your ability to see which player you’re going to switch to next when on defensive duties. Surfacing that can allow you to plan positioning, even if it also highlights when the system might break. 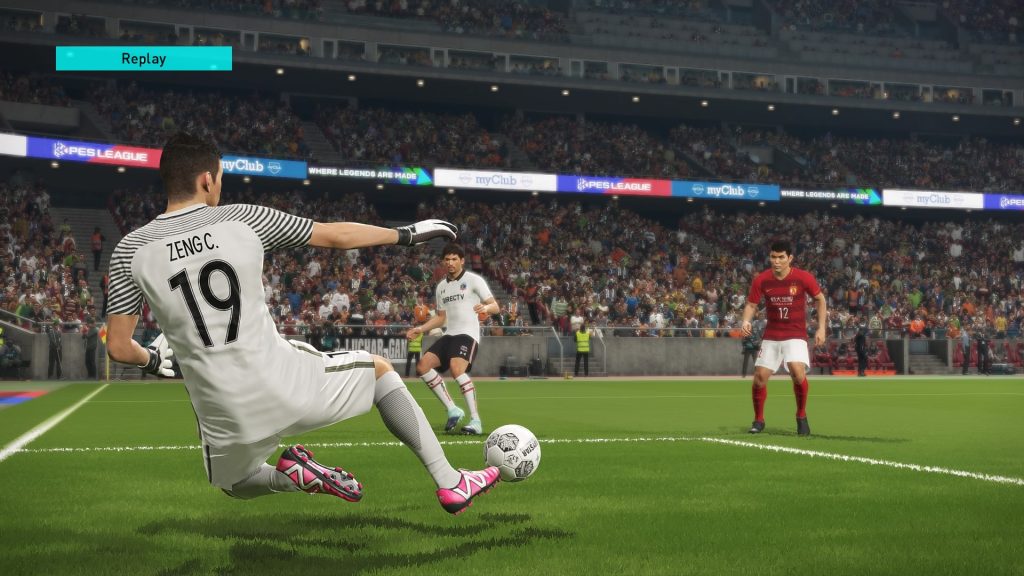 Things feel a little smoother on the ball and, most strikingly, there’s a lot more moments of improvisation. Players will stretch for more and keep the ball alive longer than previous years. It encourages you to gamble more and makes for a more interesting contest. AI feels assured and deadly, although I’m being undone a lot by balls in behind my full backs. Either I’m picking sides with narrow defenses and high defensive lines, or the AI really knows how to exploit that. Maybe it’s both.

I will say that none of the goals I’ve conceded have been down to the goalkeepers. They’ve been tuned in this version to be more reliable and are certainly more capable of stopping shots. They can be quite the godsend. You feel you have a chance if chaos reigns in your goalmouth. It’s much easier now to hold up play. Players will now jostle and shield the ball to give you time to mount an attack. It’s something that’s been absent in the last couple of years and it now gives you reason to play with a strong forward who can hold possession and show his strength. They’ve made some smart additions to the gameplay which helps deliver a much more interesting and varied game of football.

Modes remain the same as least season, with a couple of tweaks and one new inclusion. Random Selection matches, previously present in Pro Evolution Soccer 6 return. You can pick a squad entirely at random or narrow it down from leagues, nationalities, etc. It works much like it used to and offers a nice, what-if scenario for those that want something a little more fantasy football. Master League gets a revamping of the menus and a new option that allows for a more difficult experience. Transfers can become more protracted, injuries can become more severe and results seem to matter more to the board members. Those wanting something with more stakes, can find that sufficient. 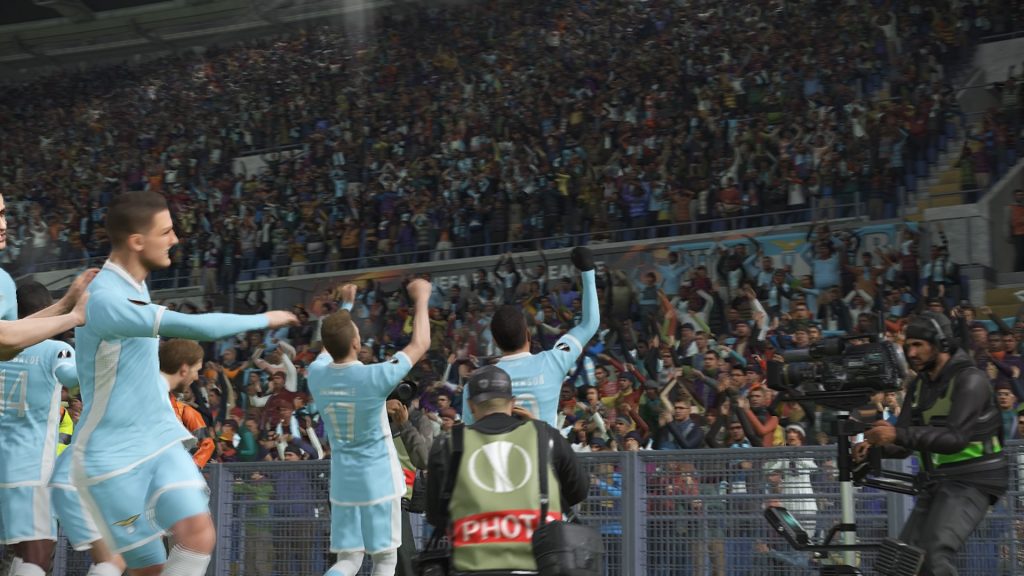 Online is horrific. July’s beta seemed promising but there’s noticeable lag in some matches and reports of scripting. Even then, online can be broken apart with three simple letters: P.S.G. Pace rules and, unfortunately, this means everybody picks the French tax avoiders and steamrolls to a 4-0 win. MyClub might alleviate this with squad building but I’d put money on there being no variety to that as everyone scrambles for Neymar, Messi and Co. It really shows the engine up as something that, methodical players just can’t hang with. At least co-op options have been expanded to three-on-three. Ok, rant over. Let’s close out.

I told you it would be difficult. Pro Evolution Soccer 2018 manages to refine the gameplay with some significant changes and slight tweak of pace. Licensing’s a little ‘in one year and out the next’ but, there’s a representation here of the beautiful game that is splendid. Competitive play against other humans can do one.