It’s not easy reviewing FIFA games.  The subtle changes between iterations often leaves reviewers clutching at straws looking for something different to say from last year’s reviews.  And anyway, everyone already knows if it is a good game.  Of course it’s good.  They’ve been simulating the sport of football accurately for years now.  If you want new gameplay you might need the sport itself to change.

With last year’s FIFA 17, EA attempted to bring something new to the table with ‘The Journey’ which was a single player campaign of sorts that saw you play as Alex Hunter, a young pro beginning his career.  The mode itself was a nice addition, even if it really was just another delivery system for a season’s worth of football matches to play.  The additional dialogue choices didn’t add a whole lot to the game and the pressure of constantly training slowed it down so that really there wasn’t very much story there.

The Journey, and Alex himself, are back.  Picking up where we left off last season, Alex has had his successful first season and starts this continuation in the favelas of Brazil.  The most interesting thing in perhaps the whole game happens here as Alex and his buddy Danny Williams start a pick up game with some local kids.  This plays out much like EA’s old title FIFA Street with a 3-on-3 match with no real rules and lots of emphasis on skill moves.

Eventually Alex and Danny get back to their day jobs in the Premier League but now there is more of an emphasis on Alex’s rising fame.  You get interviewed by Rio Ferdinand, although the acting and dialogue is just as stilted as last year’s iteration, and get to talk to various star players before and between matches.  Story antagonist, Gareth Williams, also turns up as does Alex’s dad.  We did wish that the game offered more dialogue choices when reacting to them as Alex’s default choices all make him seem a bit petulant.

FIFA also offers all the usual other modes.   As ever, Career Mode offers a ton of depth for both its player and managerial versions.  You could spend months in either of them.  Armchair managers will enjoy the wheeling and dealing as they put together their squads while players get to create their virtual pro and take them to the pitch in an effort to win matches and also upgrade their stats by completing a varied selection of on-pitch accomplishments.  This isn’t anything new for the series but we’re glad it is still there. 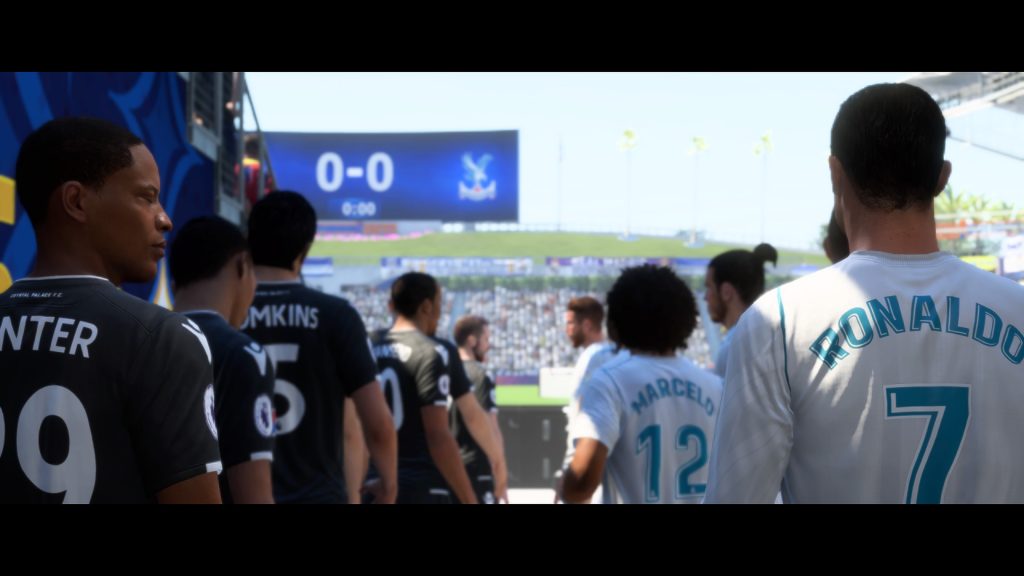 Die-hard FIFA fans won’t care too much about that, or The Journey, though.  The main draw is still Ultimate Team.  This license to print money continues to be the main focus of the game and while the usual player-collecting, squad-building gameplay is there attracting players with more money than sense and probably too much free time as they match up online, there’s also plenty of singleplayer depth thanks to the daily and weekly challenges the game gives you as well as improved squad building challenges that get you to build specific teams that you then trade in for reward packs.

Ultimate Team is varied enough this year to make it feel like more than just a cash grab.  There’s a chuck of singleplayer value here without you needing to show off your team to the rest of the community which is good if all you want is the addictiveness of putting together a great squad.  The companion mobile app also lets you manage your transfers away from your PS4.

The big concern is that between EA’s mandatory 5% take of all player sale profits and the poor return of investment when it comes to the squad building challenges, the effort involved in putting together a great team feels like bad value.  This extends to the mode’s core mechanic of earning coins by playing matches in order to buy player packs.  It takes some time to get the coins together to buy a gold pack and when 95% of the time you open one just to get some shitty 78 rated player that doesn’t fit your system at all and a bunch of consumable cards, it all feels like a rip off. 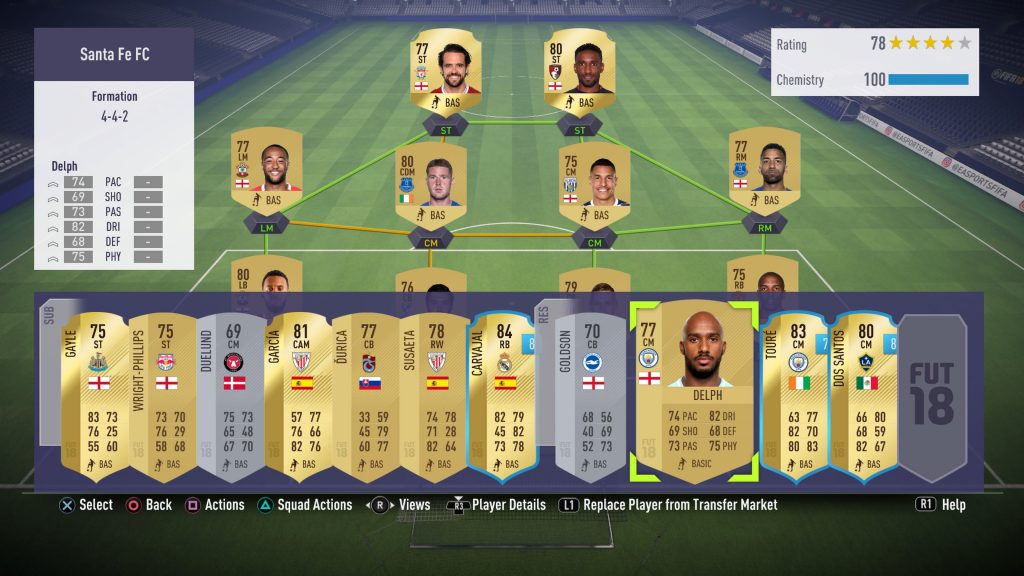 Where FIFA 17 was, for the most part a ‘fast’ year, FIFA 18 sticks with the same feel rather than deliberately slowing it down to ‘focus on more deliberate passing’ as is usual.  The thing is, it does feel different though.  Passing is much the same as before but running past players is almost PES-esque now with far less reliance on the gimmicky right-stick skill moves and more emphasis on the use of the left stick to steer your way through.  Shooting appears to be beefed up too with seven+ goal thrillers seeming way more common than in recent years, almost echoing FIFA‘s past reputation as the more arcadey game of the two titans of the genre.

Defending definitely seems to be more of a struggle too, especially down the central channel of the pitch.  The AI players have a lot more creativity now and find it easier than ever to evade tackles but FIFA’s strong physics do allow you bully players off of the ball without ever pressing a tackle button.  The sense of contact and solidness is real and sometimes picking the ball off of a winger in yet another one on one battle is as rewarding as scoring a goal.

Presentation-wise there is an overall sense of improvement.  The visuals are improved thanks to the switch over to the Frostbite engine.  Crowds look great now (although the fans tend to wear just single coloured tops, rather than replica shirts) and the level of detail extends all the way to individual blades of grass.  Compared to this year’s PES, the game looks more realistic which isn’t always the case.  This extends to the players who are a world away from the waxy models you used to get in this series.  You also get all the addition TV broadcast details that you’d expect as well.  It’s about as good as we can imagine a football game looking. 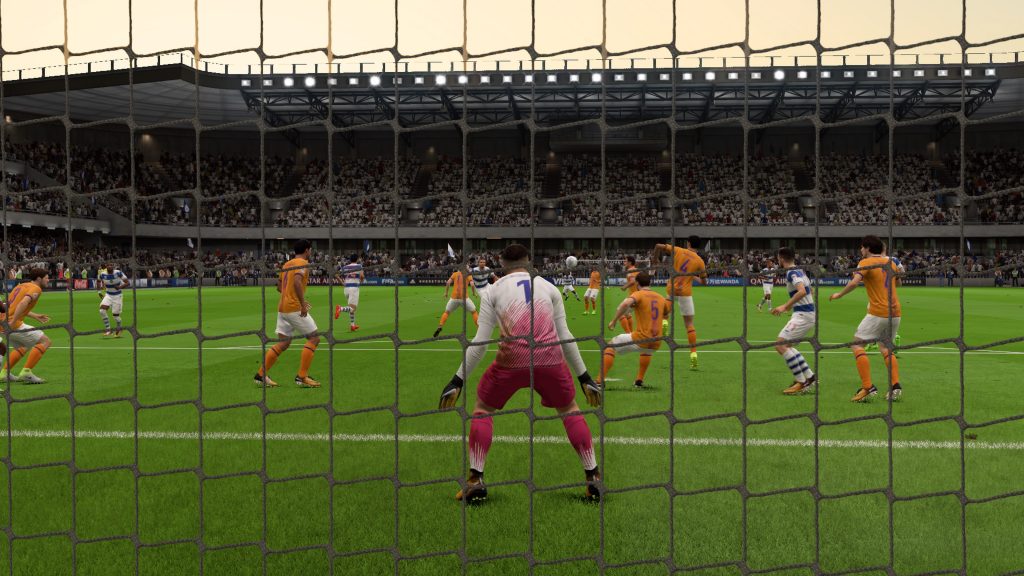 EA seemingly also gotten over that period where their menu interfaces were absolutely absymal and have toned it down so that you can actually find the options you want now.  The soundtrack is absolutely horrific though, chock full of whiny, weak, insipid indie piss which has been mixed down to sound horribly trebly.  Aside from Run The Jewels, it’s all awful.  I’m not sure why EA have correlated football fans with lovers of obscure indie but it’s a bad fit.  They need to really revise this.  And while the voice acting on The Journey could be better, at least the on-pitch commentary is as consistent as ever.

So while we’re not about to tell owners of any FIFA in the last three or four years that they absolutely should splash the £45 on this version, this does feel as dynamic and fun as the series has ever been.  Which makes it the best FIFA yet in our books.  Sure, it really is just a vehicle for the Ultimate Team mode but there’s so much content here that you can’t accuse of EA on focusing on just that.  Not much of it is new but it’s good.  Really, really good.

FIFA 18
8 Overall
Pros
+ The best looking FIFA yet
+ Tons of single player content
+ Ultimate Team should come with addictiveness warnings
+ On pitch action favours attack and is more enjoyable for it
Cons
- Doesn't offer too much new over FIFA 17
- Fans of Italian-style defensive matches won't like the emphasis on attack
- Skill moves are even less useful than before
- Horrible soundtrack
- Ultimate Team economy feels a bit miserly for the time investment
Summary
With its emphasis on attacking play and improved shooting, FIFA 18 will appeal to fans looking for fun rather than just obsessive realism. Add to that heaps of addictive singleplayer gameplay and all the usual Ultimate Team and online modes for the series' core fanbase and this FIFA is not just the best one yet, but probably the most fun too.