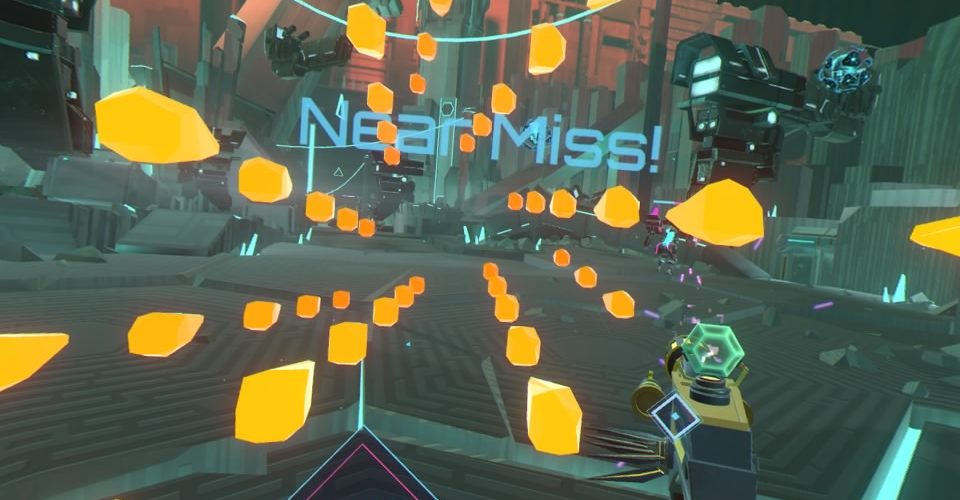 From Secret Location comes a new VR shooting gallery. Yawn! I know right? Well with Blasters of the Universe there is a slight deviation from the norm in that it’s influenced by bullet hell shooters. Instead of moving a little spaceship through waves of bullets however you’re moving your face. 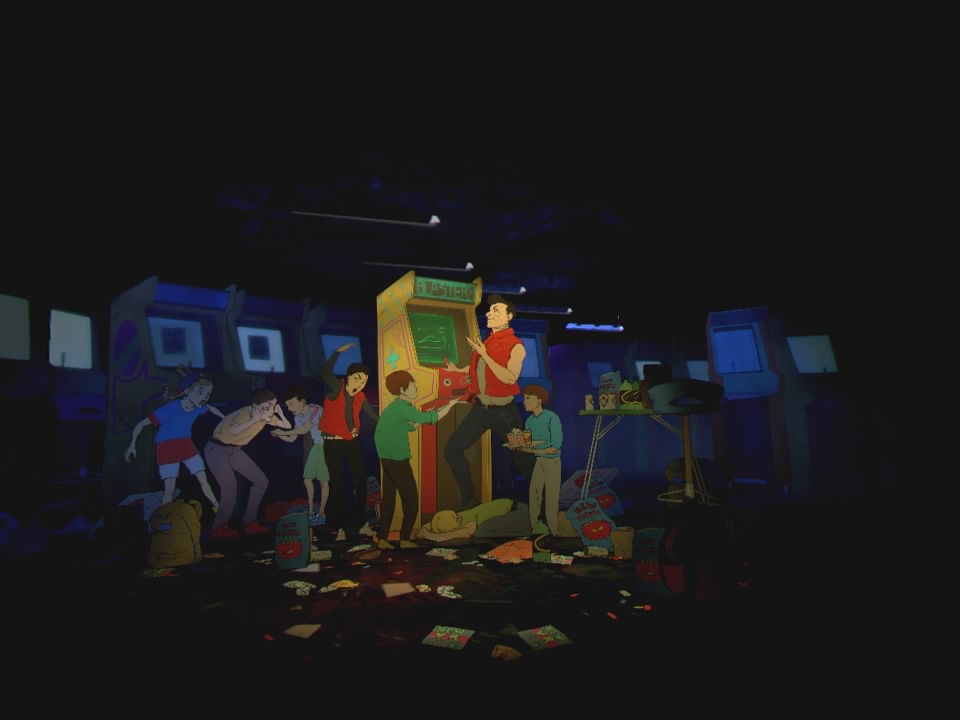 There is a minor story to set things up. Alwyn is the king of the arcade. He’s also the only adult there, beating on little kids. When a new VR unit comes in he grabs it for himself and, I don’t know, creates a world within VR somehow? Anyway, you’re basically playing against him and his minions.

Before you get into the levels proper there are a couple of things you need to do. You need two Move controllers for Blasters of the Universe. In one hand you have a shield that you can call upon as and when you need it (this is also your reloading hand) and in the other is your gun. You must construct your gun using different elements that will change things like fire rate, projectile speed and ammo capacity. There are five things to change altogether that allows you to create the gun of your choice, with a set of targets on hand to try it out on. As you play through the levels you’ll unlock more choices and you also unlock new types of shield. It’s an excellent feature that’ll keep you coming back to the armoury to try out new combinations. 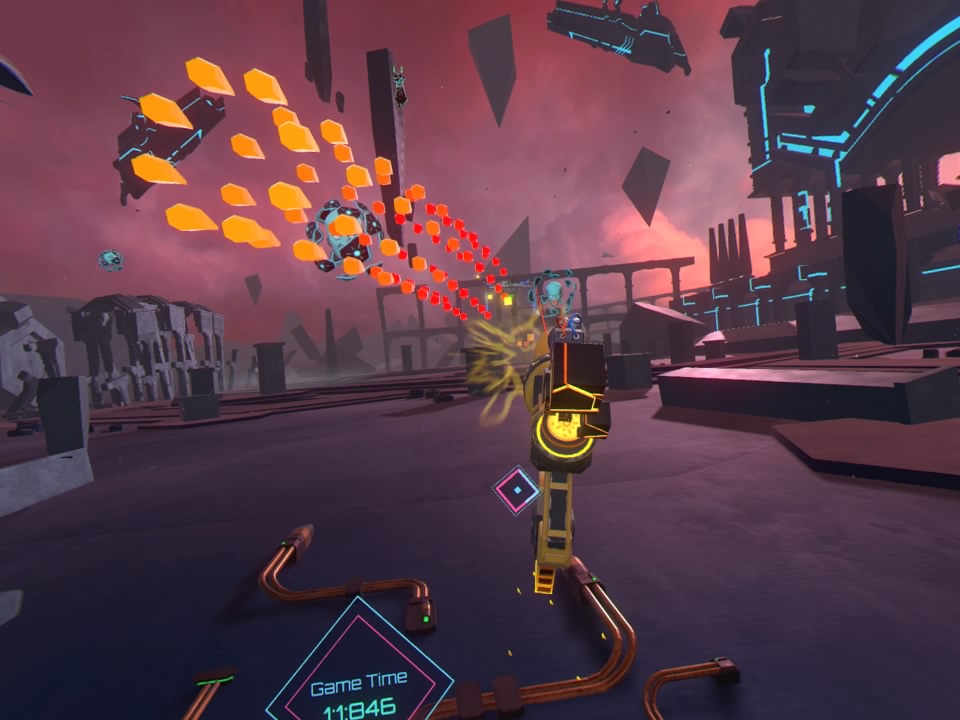 Now you’re up to speed with the controls and have built your gun you can enter a level. There are only four, with a Casual or Hell difficulty, each unlocking as you complete the previous. Ideally you want to be standing as you’ll want a full range of motion to dodge bullets when you enter the arena. Your character won’t move, you’re set in place, but when enemies swoop in and fire lines or rings of bullets at you you’ll either want to block with your shield (which has health so can’t be overly relied upon) or physically move your head (the only thing with a hitbox) out of the way. Whilst shooting the enemy with your created weapon, obviously. Enemies have life so you’ll generally need multiple hits on target to remove them from the action and keeping on top of the waves whilst also dodging the incoming fire is the key to success. You too have health, allowing you to take five hits before game over.

Survive long enough and a boss will appear. Usually rather large and with an obvious weak point, these have patterns to learn and larger attacks to dodge but, other than when regular enemies enter the fray, they tend to be the easiest part of the game. They take a lot of damage to go down but the more spectacular attacks are easy to read and dodge. The overwhelming nature of the enemy waves beforehand are far more likely to cause you trouble due to bullets flying at you from all angles. 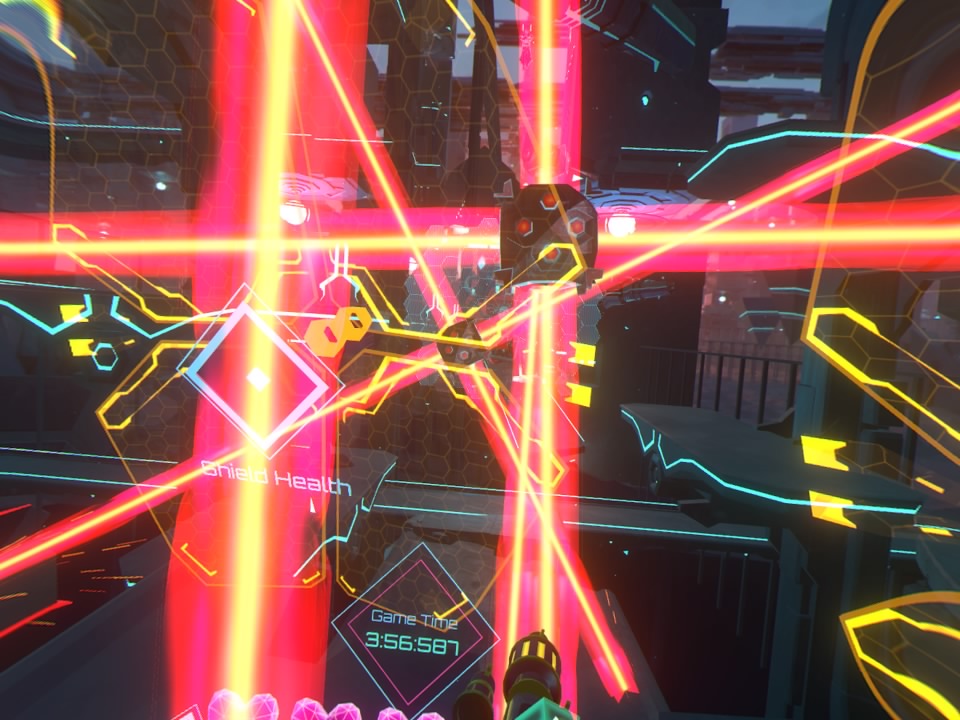 Once you’re done with the levels, which on Casual won’t take long but will be much tougher on Hell difficulty, there is an endless mode for each that scores you on how long you survive and there are online leaderboards to compete with the world if you so desire. That’s it. The trophies want you to play it for much longer requiring thousands of kills but whether the game will hold your attention for that long or not is up to you.

I’ve had some fun with it, though it is far from perfect. The visuals are solid and sharp for a VR title, but also rather plain considering the neon, Tron-style visuals. The enemy design is rather bland with only basic animation as they move into position before taking their shots and moving to another. I also feel the audio could do with some work in regards to making the player more aware of what’s around them such as which enemies, whether they’re shooting and incoming bullets. Enemy shots do make noise but they tend to get lost within Alwyn constantly taunting you with rather annoying, geeky insults and your own shots and the travelling bullets are silent (VR Invaders even gave you an visual cue to let you know there were shots incoming). I took shots on my blindside whilst dealing with stuff elsewhere on numerous occasions simply because I didn’t even know there was a threat. 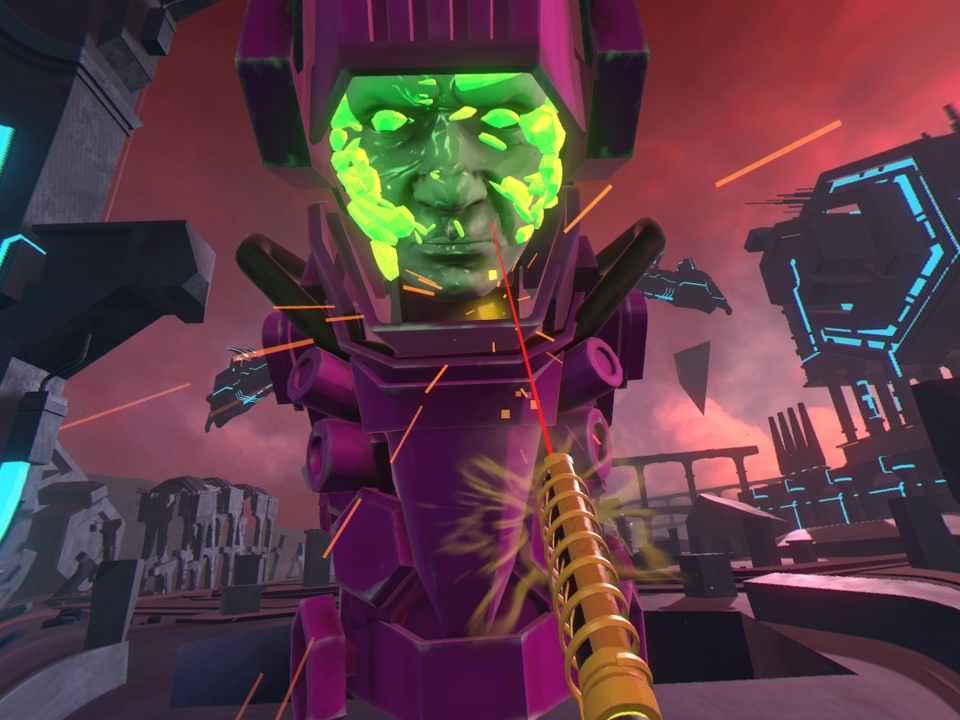 The bullet hell angle doesn’t change things as much as you might hope, I’ve dodged plenty of things in VR already, the bullet patterns are just slightly more complex but despite being short Blasters of the Universe is still enjoyable. Having complete control over your gun is an excellent feature, the tracking is pretty much perfect and at least this has online leaderboards if you do want to chase scores (unlike VR Invaders) but if your 2D bullet hell shooter was this tame you’d be disappointed.

Blasters of the Universe
7 Overall
Pros
+ Crafting your gun is great
+ Works perfectly on a technical level
+ Using your head as a hitbox is a success
Cons
- The bullet hell aspect doesn't change that much
- Lack of audio cues makes being caught out too easy
- Only four levels
Summary
Blasters of the Universe asks you to weave your head through a barrage of bullets. It works great on a technical level and the gun customisation is a strong point, but at only four levels it's over too quickly and despite being 'bullet hell' it doesn't feel too different to what you've probably played already.