I’m going to ‘fess up right away.  This game isn’t for me.  I’ve never romanticised the idea of being a truck driver on the open roads and back routes of America (even less so the Eastern European mudlands of this game) and roughly sixty seconds into firing up Spintires: Mudrunner I had that dreaded feeling of ‘I’ve made a terrible mistake’ that hits all reviewers when they realise that they are now committed to reviewing a game that is very unlikely to prove their first impression wrong.

That said, I’ve perservered because fairness matters and this has been one of the hardest reviews I’ve ever written.  How do you review a game that is apparently good at what it does when you hate almost everything about it?  Well, this is my homework for the week so let’s see how I get on.  If you’re reading this and absolutely love this game and the series it is from then yes, I know.  I’m sorry.

Spintires: Mudrunner is almost misleading.  The title would easily fit an off-road racing game featuring ATVs and it evokes thoughts of spinning tires, splashing mud and general chaos and a quick look at the game’s Metacritic profile across PS4, Xbox One and PC suggests that it is well-liked and this is why I chose to give the game a chance to prove itself to me because if it turned out to be great then that’s all good but if I continued to dislike it then it’s up to us that you know exactly what type of game this is. 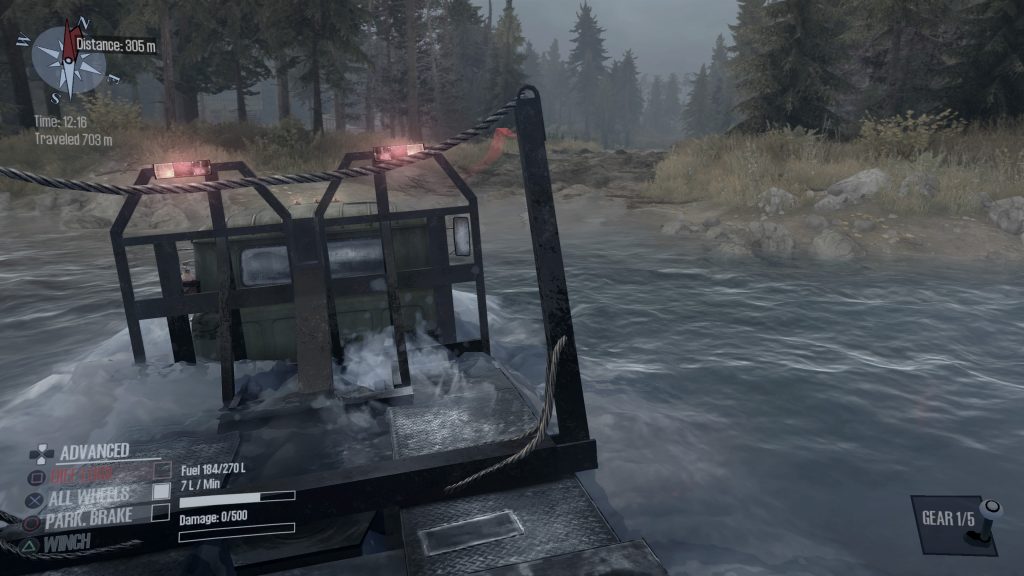 The game is infact one of those simulator games that are so popular these days and, as with the rest of those games, it puts realism front and centre of the experience but places fun somewhere at the back.   The game’s short tutorial explains the premise.  You drive trucks and your main job is the deliver logs across the various maps of the game.  This generally involves picking a truck, taking it to a logging station, loading it with logs and then taking them to a lumber mill.  Rinse and repeat until the mission is over.

I could explain the game mechanics further but here’s my exact experience of the game.   I set off from my base towards the logging station.  My truck was moving rather less quickly than I can run.  I mean seriously slower.  Its wheels churning up the mud that the in-game map claimed was some sort of path.  Some ten minutes later, I was barely half way there having driven less than a kilometer.  I swapped DualShock controllers to make sure my first one wasn’t broken in some way.  I’m not joking.  I actually did that.

I stopped for fuel because, having floored the pedal for the whole time, I had used a fair portion of gas up.  Up until this point I had stayed on the paths that the map showed but now there was no path.  I crossed a stream, using my winch to pull me towards the trees that lined it, struggling to maintain even a basic walking pace in my truck.  I eventually made it to the logging station and after figuring out how to load up my truck I realised I had the wrong bloody equipment attached.  Ugh. 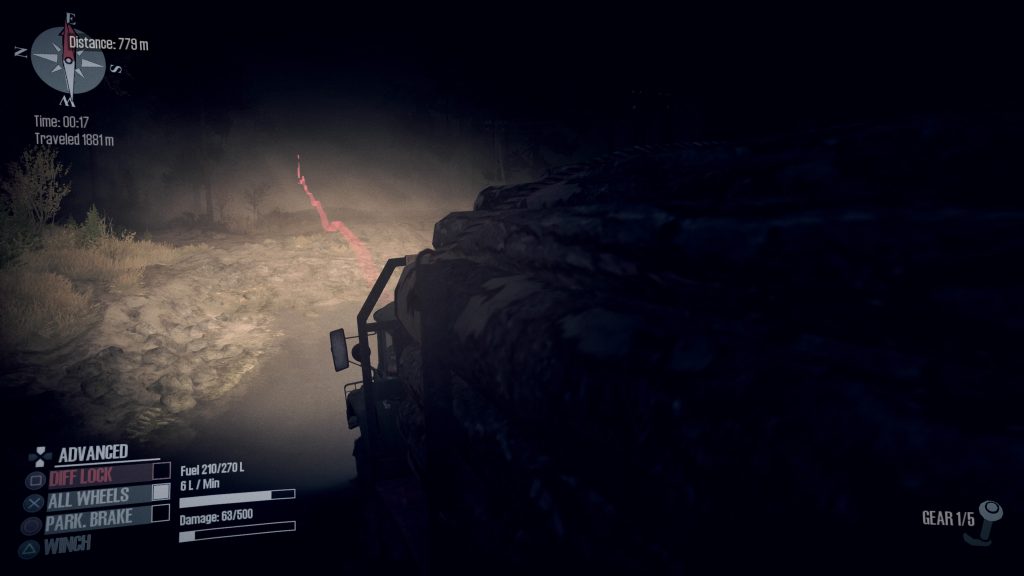 I tried again, slowly trudging to the logging station again.  I got there, struggled to load up my truck again but then managed it.  At this point my truck, now loaded with wood, was even less easy to manoeuvre.  Also, the logging station for some bizarre reason had nothing resembling reasonably drivable ground around it.  My truck fell on its side trying to find a path IN THE DARK (you have headlights but you need to see way more of the area than they can show you) because of the game’s day/night cycle and a game world that seemed so utterly unfit for purpose, it’d be like setting a kid’s game in the BBC studios in the 1970s.

I tried again.  This time getting back where I was and then off-roading it (not that there are roads), I ended up stuck trying to get up a part of the path that had an incline.  I had to select another vehicle, trudge my way back to where I was and then winch my other vehicle up the hill.  I kind of enjoyed that because it felt like I was solving some sort of puzzle.  I then continued and found that the path I was driving was being crossed with another stream.  With trees covering every other part of the immediate vicinity, I tried to cross the stream.  My truck fell over, losing the load.

This time I decided to go via the part of the map that was completely fogged over.  This actually turned out to be a slightly more workable route.  Until yet again I ended up on a path with no obvious route through and I ended up caught up in some trees that I couldn’t get away from.  I also passed a garage that I could have unlocked if I had taken a truck modification that had “garage points” which another lesson hard-learned.

Each of these attempts took ages.  And it’s not like the game is so difficult that there is a bloody-minded enjoyment to getting through it.  It’s that every attempt is just an investment of time.  There are no other vehicles, nothing else to do.  You are just delivering stuff but in a world that exists purely to slow you down.  If the mud wasn’t such an obstacle this would just be a game of ‘go to point A, pick something up, go to point B’ like the absolutely risable Island Flight Simulator, a game that can only be described as the least interesting menial task you could ever subject yourself to. 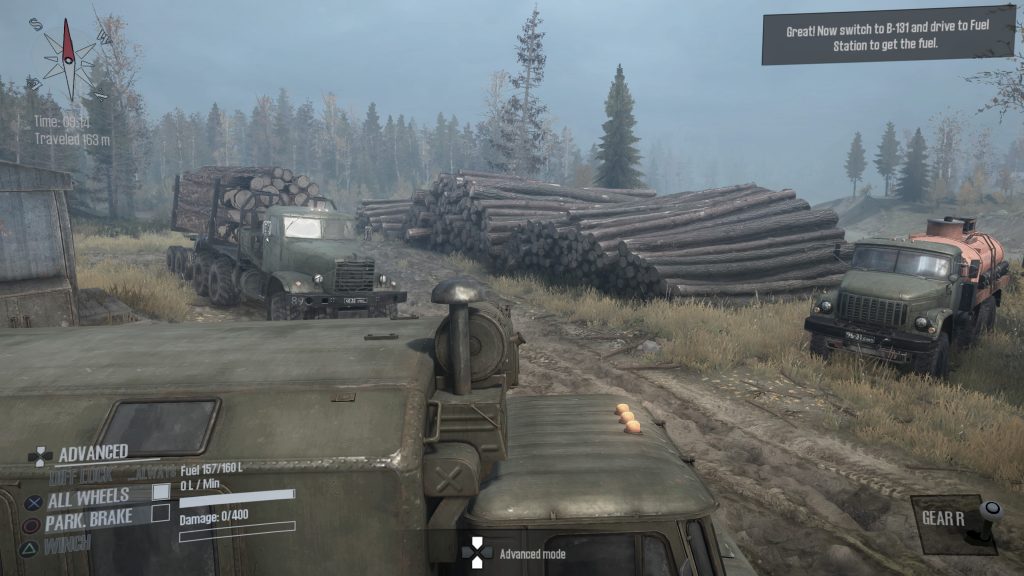 You do learn as you go along but each lesson comes at a cost of your time.  Not in-game time but the actual limited time that you, the reader, get to spend on this planet.  If the game just explained this stuff a little better, you’d be better equipped for the job at hand and there’s no reason for them not to tell you.  I know it’s a simulator but surely every job comes with a little bit of training.

The best way to play the game ends up being that you ignore the single player campaign and just play the challenge missions instead.  These are far shorter and give you tasks to complete with some additional requirements to aim for such as completing your delivery without using THAT BRIDGE.  You know, the one that is in a helpful place as opposed to all your other crossing options which basically involve you and your truck drowning.

On the plus side, while the game world is just horrible, muddy woodland and a few basic buildings, the level of realism is pretty good.  Mud clumps up in your tires and is washed off when you drive through water, heat distorts the area in front of your engine and the physics are realistic, to a fault you might say.  The realism doesn’t extend to the lighting engine (there are no shadows) but it all looks good, albeit in an ugly, muddy kind of way. 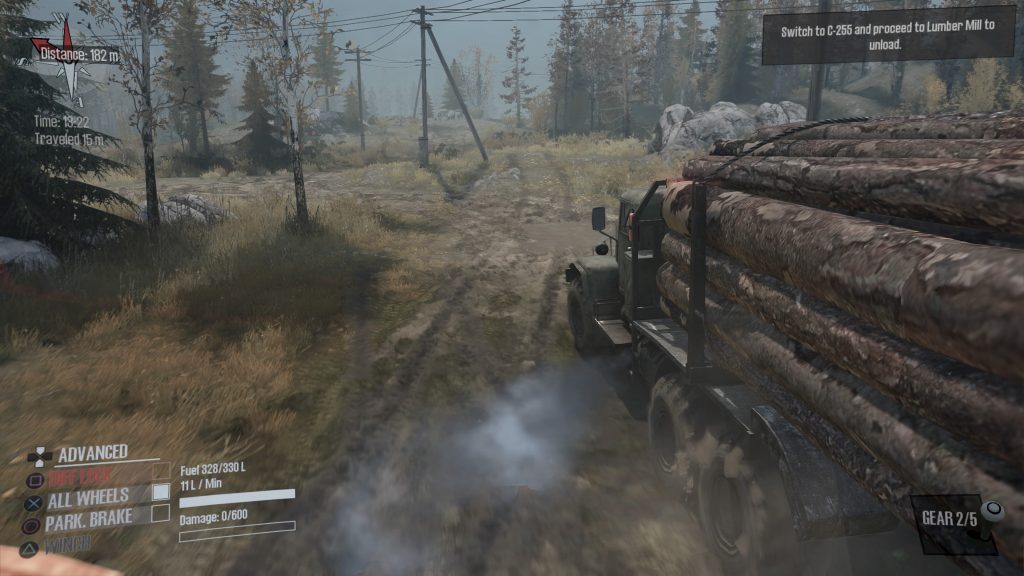 At best, you’d say these simulation games are a way to relax but my right index finger feels like it is going to fall off thanks to hours and hours of squeezing every last bit of acceleration from my joypad and the dismal camera does its best to actively obscure the action, making an already problematic game even less fun to play.   It’s so unimaginably player hostile that it makes you wonder if this is some sort of psychological experiment or just some form of antagonistic art.  The camera can be rotated around your truck but is so badly designed that you end up moving it almost constantly, trying to understand exactly where you are.   A straight forward up and behind option simply isn’t there and most of the time you are playing in a Resident Evil 4 over-the-shoulder kind of view.  Not that trucks have shoulders but you know what I mean.  The cockpit view would be better probably but not in this game world.  On roads, sure.  But when you are weaving through trees, it is impossible to use effectively.

Ultimately this feels like you are those kids in The Blair Witch Project.  Hopelessly lost in an environment that clearly doesn’t want you there but now you’re a truck.  That’s exactly it.  Blair Witch for trucks.

To the game’s credit there is a multiplayer mode which is absolutely buzzing right now.  Unfortunately, 99% of my attempts to join a lobby failed (and, yes, I’ve got good NAT settings and a very fast connection) and there was no way to filter out the hardcore games from the casual ones or to only see specific maps.  You couldn’t even filter out the full lobbies.  Most lobbies that I did join just had hosts sitting there doing nothing who would eventually leave.

So now, here we are about to drop the game’s Metacritic score down which will annoy people who like the game and trust me, we don’t want to be those guys but this isn’t a game.  It’s a chore.  If just ten minutes of this was a mandatory story mission in something like GTA5 or Far Cry, it’d be almost game-ruining.   I’ve really tried, you know?  I’ve put hours into it, I’ve read reviews on other sites and watched a bunch of videos, looking for something I’ve missed, something that will make me understand the appeal of the game.  I’ve even stopped this review at least four times to give the game another chance to prove me wrong and even now I’m not sure what score to give it.  But the fact is that is a game where you just drive really slowly for ages and that may be just what you’re looking for from your gaming but believe me, there are so many better ways to spend that time.

Oh, and I was playing in ‘Casual’ mode.  Jesus.

Spintires: Mudrunner
3 Overall
Pros
+ Muddy physics seem about right
+ Has lots of people playing online
+ Achieving any sort of basic success feels like an enormous win
+ Interesting puzzle-solving, resource management element to the gameplay
+ Some really good graphical touches
+ Has some depth
+ A (presumably) accurate simulation of delivering wood in a world made of mud
Cons
- Possibly the slowest driving game ever
- Entirely player hostile
- Irredeemably dull
- As relaxing as a job interview
- The camera is just shocking
- Multiplayer lobby system appears a little broken
Summary
Part driving game, part menial labour simulator, Mudrunners may well be the least fun we've had on our PS4. This isn't a game that sends the mud flying everywhere, it's one where the mud bogs you down until you feel like you are drowning in it. However, if you're looking for a challenging trucking simulator that is genuinely different, this may be well up your street. Do your research before you buy though.