The history of gaming is littered with mascots that didn’t quite make it.  For every Sonic or Mario there are plenty of strange heroes and anthromorphic animals that have starred in their own platforming series that weren’t system sellers in their own right.  Bubsy was one of those and the titular bobcat has now found his way to the modern gaming formats with Bubsy: The Woolies Strike Back.

The previous Bubsy titles were mostly 2D 16-bit affairs (apart from the forgettable Bubsy 3D: Furbitten Planet  on the PS1) and this game taps into that history by offering strictly 2D gameplay albeit it using 2.5 graphics engine.  The chirpy music and enthusiastic (but sparse) voice acting adding to the retro feel. 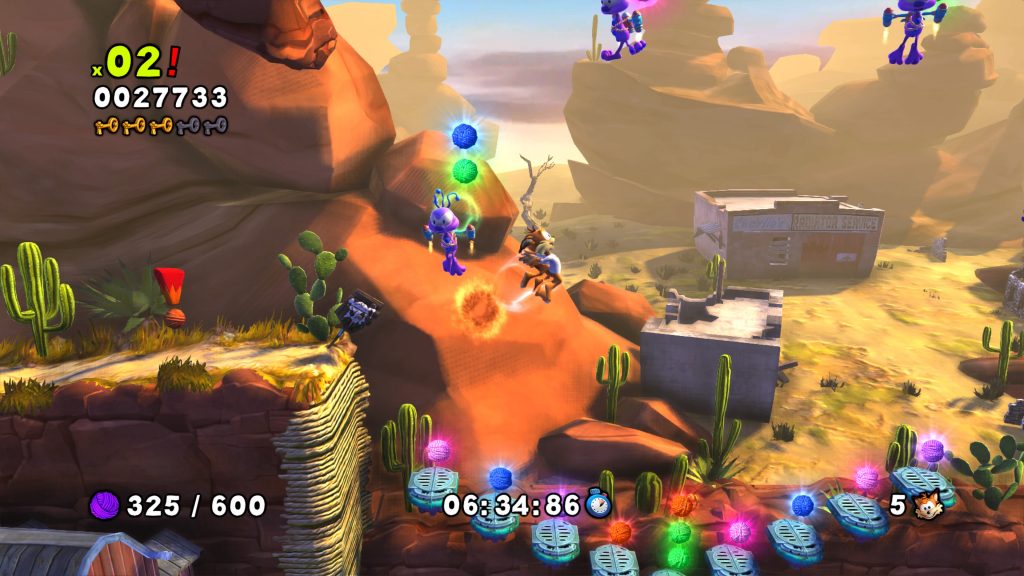 Some attempt at a story is made thanks to a simple scene that shows Bubsy’s golden fleece being taken by aliens.  No further explanation is given and you are taken to the main map screen where you select your levels.  A tutorial level is available first and it explains the moves available to you:  a simple jump, a floaty glide move and a pounce attack.  From then on you are tasked with getting from the left hand side of the stage to the right, picking up balls of wool (which add to your rapidly depleting score multiplier), t-shirts (that offer protection) and keys (of which five are needed per level to open up a vault at the end).

Each level is a pretty straightforward platforming kind of affair.  There are static platforms and some that move or disintegrate.  Springs occasionally appear that let you gain extra height.  Enemies get in your way.  Water and lava offer instant death.  All pretty standard stuff.  As you proceed through the game, old hazards continue to appear but new ones are added, making the game a little trickier as you go on. 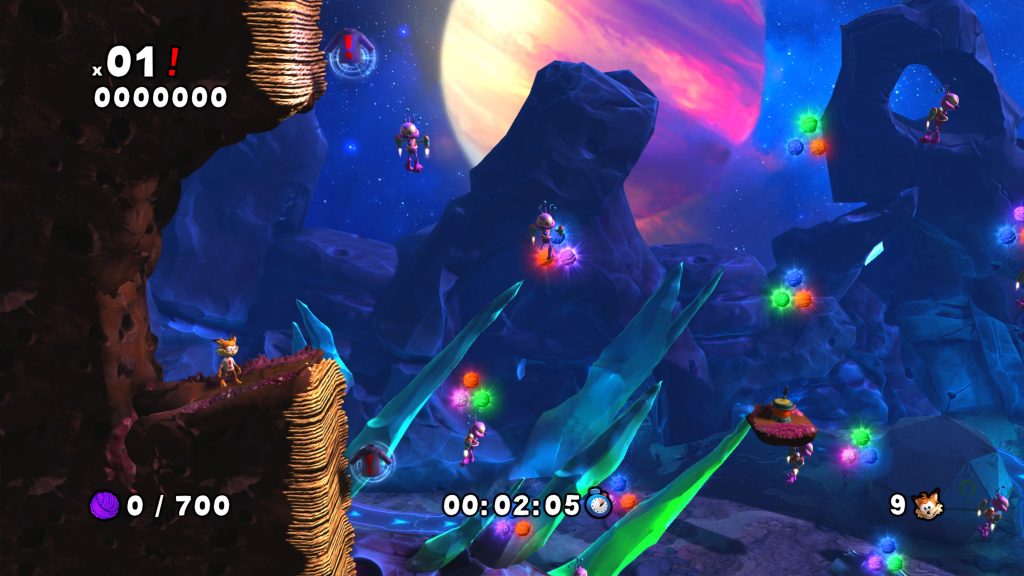 In terms of level design, for the most part it works okay.  Occasionally, the placement of various enemies and collectables seems a little unfair but you have so many lives per stage (nine, naturally, with others being easy enough to earn on top of that) that you can have a few goes at these.  Sometimes items you want to collect are placed right above water, leading to the occasional cheap death.  You can ignore them and still get through the level but the design does seem to be badly considered at times.  And then there are the level titles which are all weak puns based on cats (“Back to the Furrture”), wool (“Cabin in the Wools” – jesus) as well as terrible ones like the final level has (“Bobcation Rhapsody).

The levels are quite short and there are only ten regular ones and three boss battles.  Getting through the game is very easy and can be managed within a couple of hours.  The additional challenge is there if you care about the trophies and these require you to beat each stage without dying and to collect all the t-shirts and keys in the game.  However, if you’re not into trophies then there isn’t much reason to worry about that.  Especially as the game only offers eight bronze and three silver trophies. 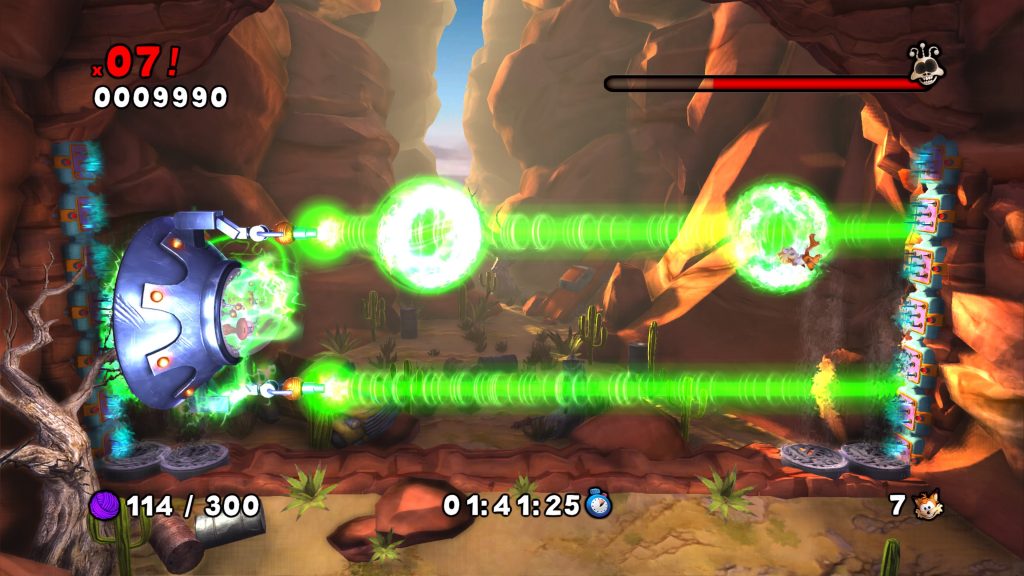 The levels are punctuated by boss battles, making three indistinct sections to the game.  The first two (which equates to six regular levels and two bosses) are set out a generic rocky region while the third part of the game is set in space.  There’s very little variation in the game’s look throughout the game and no real change to the gameplay.  Even the three bosses of the game are very similar (they are all UFOs that require you to dodge attacks before capitalising on brief moments of vulnerability by pouncing at their cockpits).

Given the sheer amount of praise being lavished on the new Mario game for its variety and Sonic Mania for its refined gameplay, this is just far too basic to recommend, especially given the game’s laughably high price point of £24.99.  For a third of that price you’d still feel a little bit shortchanged by Bubsy‘s limited lifespan and lack of variety, which is a shame as the actual gameplay here is quite tight and enjoyable.  It’s never anything special but if you’re looking for a cheery platformer (rather than some bleak indie one about feelings) then this is okay.  But, far better options exist such as Tembo: The Badass Elephant so you might want to check that out instead.

Bubsy: The Woolies Strike Back
4 Overall
Pros
+ Playable enough
+ Clean and colourful 2.5D visuals
+ Collectables/trophies offer some degree of replayability
Cons
- Terrible value for money
- Ridiculously repetitive
- Far too short
- Uninteresting level design
- Entirely average boss battles
- Doesn't have any original ideas at all
Summary
It's not that Bubsy is terrible, it's that it never ever tries to be anything other than average. For this kind of price, we expect so much more.