Sometimes games defy easy categorisation and Butter & Friends: Babysitter Sim is one of those games. Inspired by the wallpapers and avatars popular on the PlayStation 3 this is an arcade experience unlike anything else I’ve played. 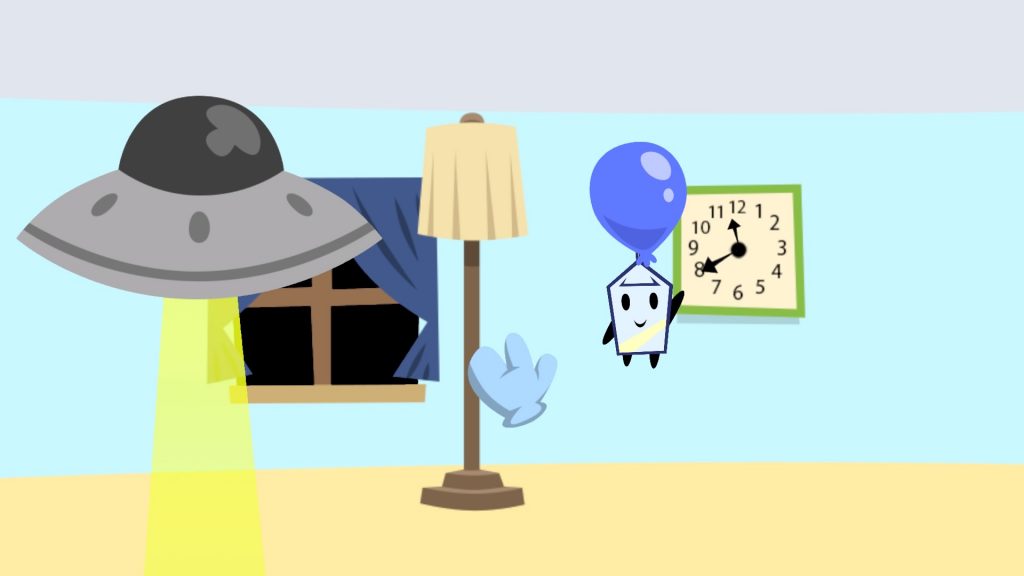 The concept behind this game is that you and up to three local friends are babysitters for Butter. His parents have left you in charge and you’ve got to look after him for twelve hours. Oh also the front and back door are open and there are loads of things trying to abduct Butter. In some ways the set up is like Home Along if Macaulay Culkin was a food stuff.

Graphically things are real simple with a Flash style to everything. There’s no getting away from the fact this game looks a bit rubbish, although Butter, and the other friends, have some charm to the design.

There are three difficulty settings and playing on my own I found  easy to be the only level I was any good at.  Medium and hard are clearly for multiplayer in my view as the increase in the number of abductors at these levels makes things almost impossible on your own. 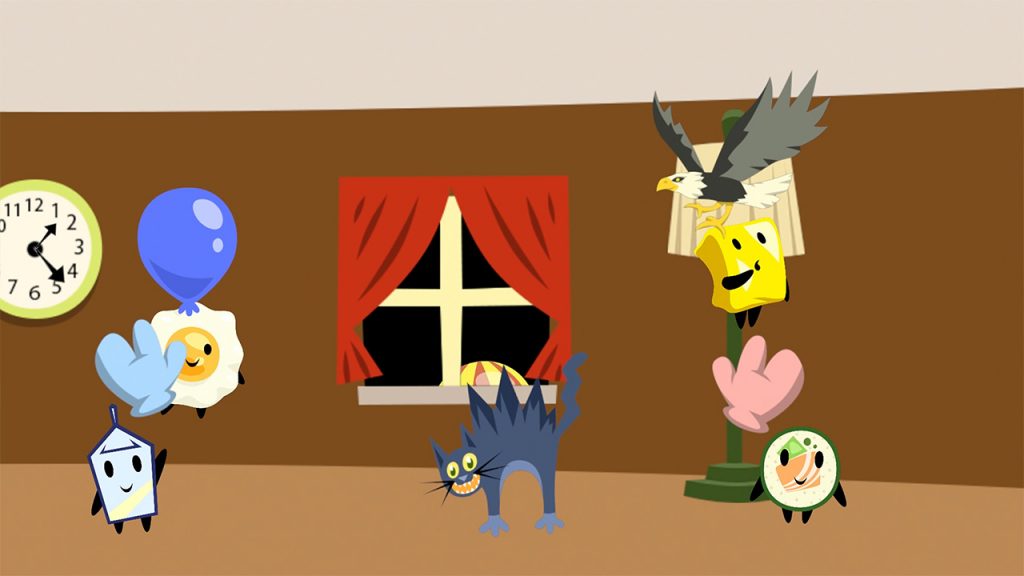 The levels all play the same, with the same background and same abductors present.  What this means is that once you’ve had a go you’ve effectively seen all Butter & Friends: Babysitter Sim has to offer. Your chosen baby starts in the centre of the room and will casually toddle about, the aim is to stop your baby leaving the house through either the left or right side of the screen.  You control a disembodied hand which can grab the baby and move it around to stop it toddling off.

To make matters worse the house will be invaded by a range of abductors, around eight in total, who’s sole aim is to drag the baby out of the house. These abductors can be anything from UFO’s through to cats, but they all want to kill your baby. Using your disembodied hand you can rescue baby from these abductors, and that is the core of the game. 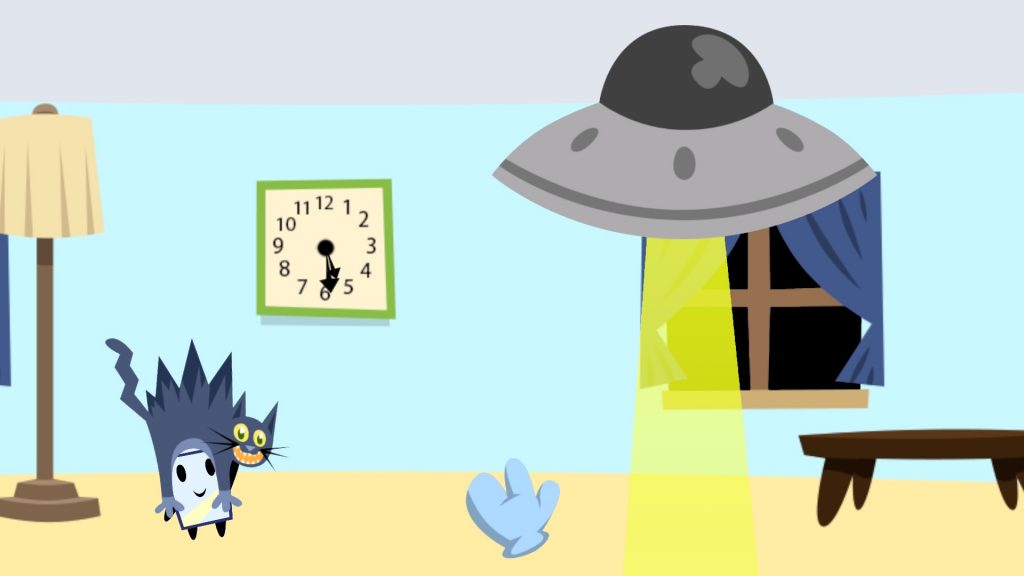 Things quickly get out of hand and Butter & Friends is all about keeping the proverbial plates spinning. As a single player game things get hectic quickly, as a multiplayer game things basically start out of control and get worse. You can play with up to four babysitters and four babies, or any combination of these. The more  babies you chose and the fewer babysitters you have the more chaotic things  get. There is a fair bit of enjoyment to be had in watching the scene degrade into chaos, and it makes an excellent party game.

That’s pretty much all there is to the game. You can unlock other babies to play with, but these don’t change the gameplay in any way and are purely cosmetic. I wouldn’t normally mention the trophies but there is a fairly easy platinum to get here, provided you can get a four player game together. 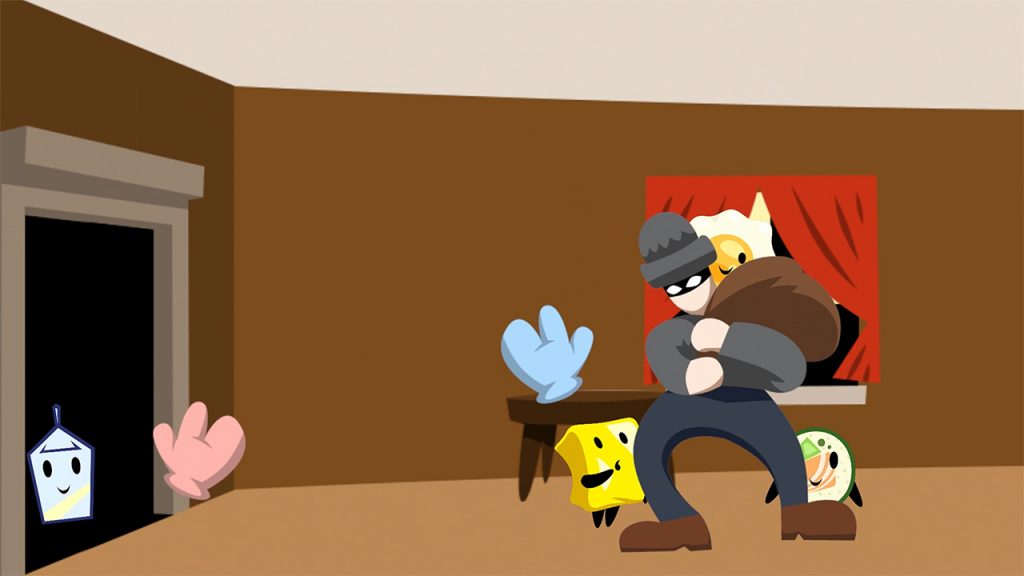 As throwaway as Butter & Friends: Babysitter Sim is, and it is very, there is some enjoyment to be had here. I’m not too sure of the need to buy this game if you’re going to be playing solo, but if you’ve got friends who’ll be willing to sit with you and play then you can find some enjoyment here.

Butter & Friends: Babysitter Sim
5 Overall
Pros
+ Fun in multiplayer.
+ Easy to pick up and play.
+ There is some nice characterisations in the food babies.
Cons
- Graphically this looks poor.
- As a single player experience this is not very good.
- There is a lack of any longevity here and you can pretty much see everything in a couple of goes.
Summary
Butter & Friends: Babysitter Sim is a throwaway party game. As a solo experience it doesn't really have any legs, but if you've got friends who'll be willing to play locally with you, there is fun to be had here.