Red Bow is the latest Ratalaika joint. Coming from London-based solo dev Stranga Games, this follows My Big Sister and Just Ignore Them graphically as well as thematically.

Sadly, the title of their last game Just Ignore Them proved strangely prophetic as we’re beginning to see diminishing returns from Stranga. Just as with MBS and JIT, Red Bow is a Gameboy Color styled adventure game with horror overtones. Even down to the forced aspect ratio with massive borders, it’s like playing a GBC cartridge on the SNES Super Gameboy peripheral. 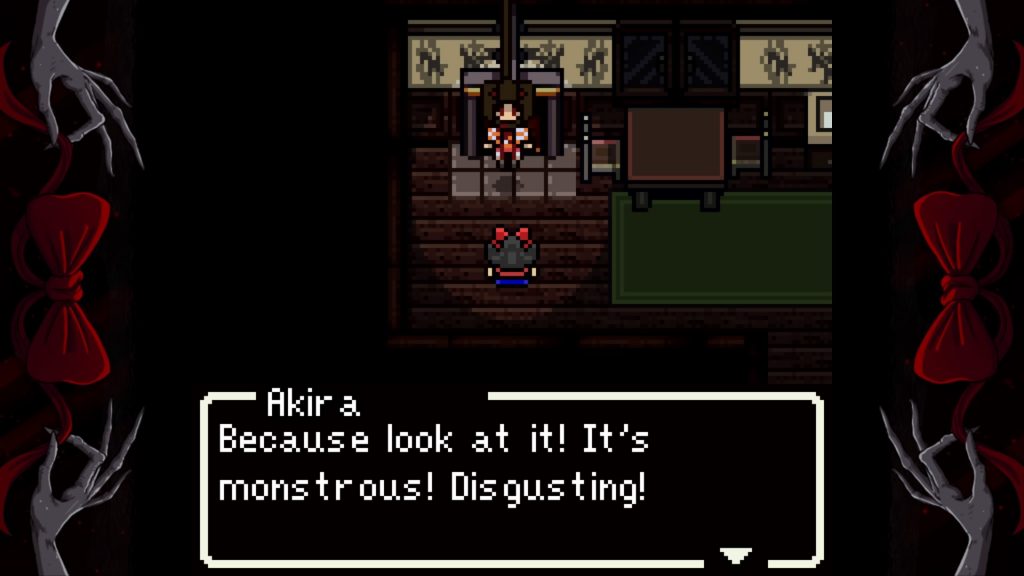 Similarly, you’re bombarded with trophies arbitrarily when you perform actions you’d do anyway. Unfortunately, after the strong start of My Big Sister, our man Grizz rightfully mauled Just Ignore Them. We’re sad to report that Red Bow is continuing the downward spiral.

It’s all a bit spooky for the sake of being spooky. Unlike My Big Sister the characters are all very forgettable and the plot doesn’t really make any sense. Dare we say that it’s all a bit boring? We found ourselves playing our last review game Heroland instead of playing this. In addition, one trophy we got by accident led to a game over screen and we got bumped back to our last (manual) save. 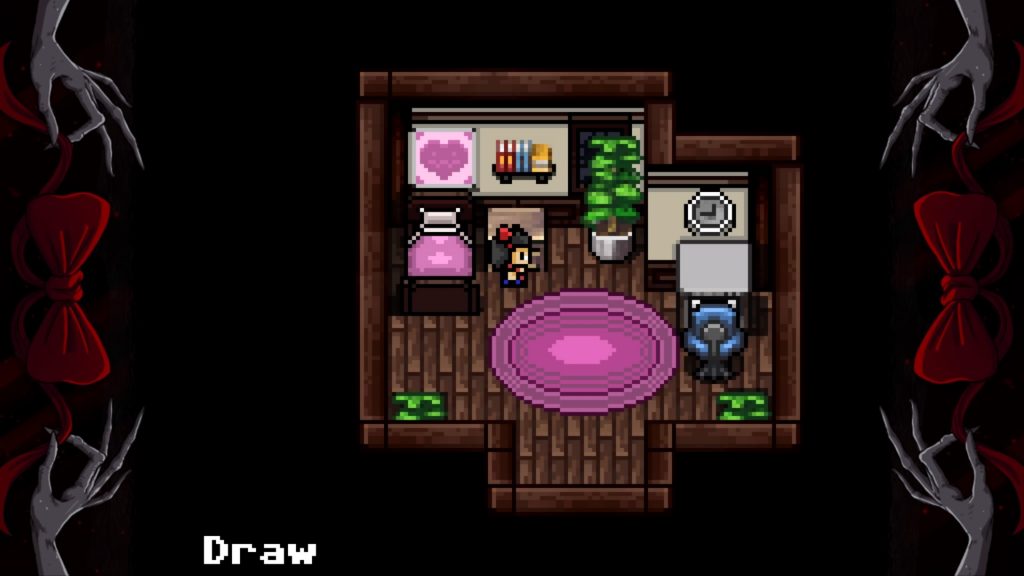 So rather than tread through the dialogue again, we found ourselves spamming the X button to skip forward. One section requires you to scare a cat to get a bunch of keys. However, in our haste to get back to where we had died, we missed interacting with an object which meant we couldn’t proceed any further. We put firecrackers where they should’ve gone but due to doing it out of order, it didn’t trigger the event to scare the cat.

Could we pick up another load of firecrackers from the bucket outside? Could we buggery. So we simply switched off and we went to bed rather than have another go. Yet we didn’t go back to Red Bow for another three days. Our goodwill was extinguished by what you’d think was an insignificant bug. But by this point our patience had worn thinner than this reviewer’s hair. 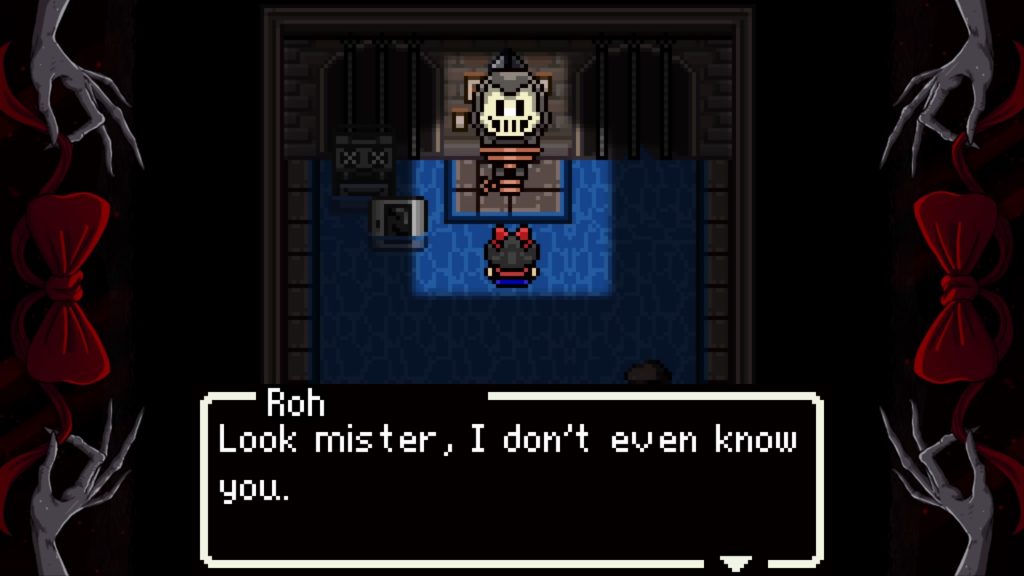 Despite having ample opportunity to do so, we haven’t yet bothered playing on the bundled Vita port either. We eventually came back to the game to get the review written thinking it might have helped our view. It helped a little, but then we had just played the execrable Foxyland 2 so anything seems an improvement after that.

Our criticism of just trying that bit too hard still holds true after a little time away from Red Bow. It’s not that the game is terrible, more than it is a bit forced. Perhaps Stranga might do better playing it for laughs in the future? It needn’t all be suicides and ghostly apparitions. Either way, the schtick is getting long in the tooth. We’d try to give you a precis of the plot on offer here but for the fact its largely a jumbled mess. 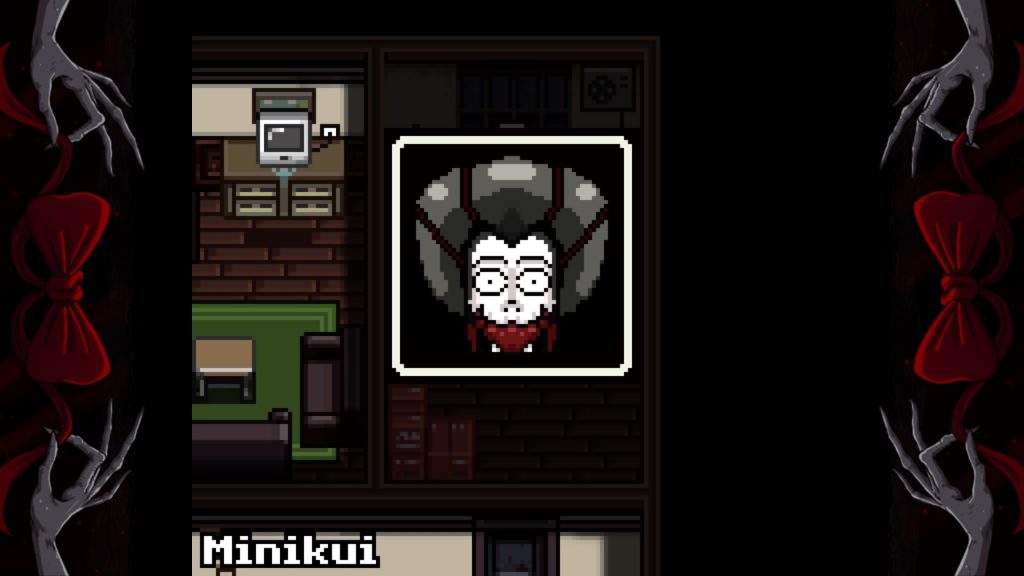 There’s multiple endings on offer here, but with a little strategic saving you can get all the trophies in one playthrough if you so wish. Good news for those gamers that pick up Ratalaika games with that outcome purely in mind.

In conclusion, Red Bow continues in the same vein as Stranga’s previous games but this furrow is proving barren now. If you want to get an easy double platinum, Red Bow is perfect. But for anyone else, it falls short.

Cons
- Trying a bit too hard to be macabre
- Plot is hackneyed and nonsensical
- Perhaps Stranga need to try a new angle
- That's not how you spell drawer
Summary
Stranga bring us Red Bow which proves underwhelming. Trophy whores are well served despite that, moreso with the double platinum.