Heroland is a turn based RPG from two big hitters of the genre in Takahiro Yamane and Nobiyuki Inoue (of Fantasy Life and Mother 3 respectively). In addition, the music is by Tsukasa Masuko (of Shin Megami Tensei and many other games besides) so on pedigree alone, it should be on your radar. Published on western shores by XSeed Games, Heroland was developed by Shinjuku-based Furyu Corp. So unlike a lot of the games we’ve reviewed here, this really is a Japanese RPG as opposed to aping one.

Originally released in Japan in 2018 as WORKxWORK, Heroland is the very well done localisation of the same. Unlike the likes of Final Fantasy and Dragon Quest, your role isn’t that of the hero. Your player character is a tour guide called Lucky. Yes, your role is to escort VIPs through dungeons in the titular Heroland. 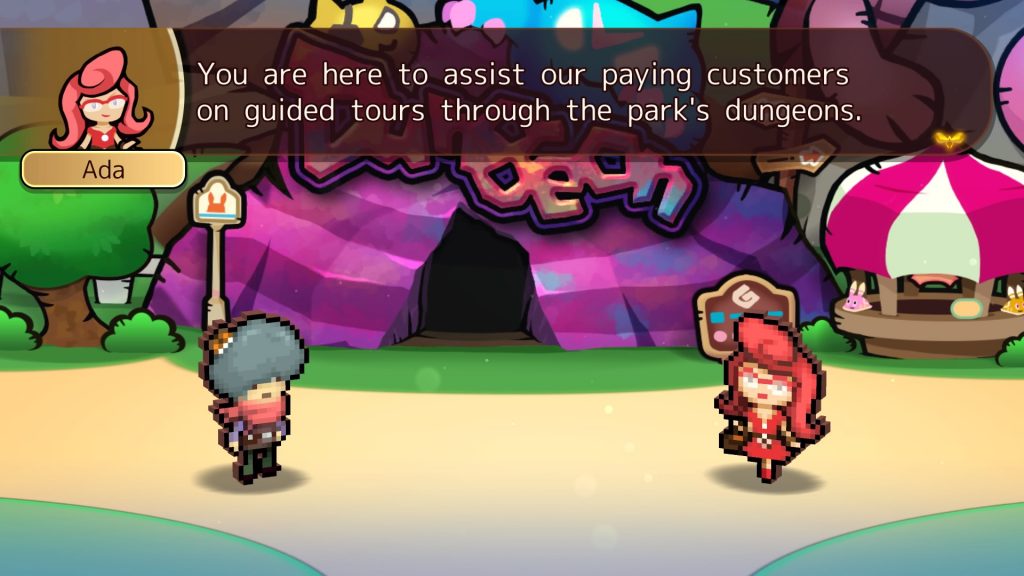 It’s a novel twist on what is becoming a tired formula for some, but sadly let down a little in the implementation. The script has been localised with great aplomb by XSeed’s own internal team so we can’t criticise it at all. In fact there’s a great article guest written by them about the localisation process we’d recommend you read. The fault lies in the game mechanics and pacing unfortunately.

Going back to the localisation, the guys at XSeed have had a bit of fun shoehorning programming languages in as the character names. The really obvious examples being Fortran and Cobol, but also Lua your fairy helper. It’s a fun little quirk that younger players might not pick up on, but for a long-in-the-tooth old lag like this reviewer, it’s a welcome nod. Cobol’s family also happen to be made up of RPG character tropes, Cobol being a cookie cutter healer. Whereas his wife is a mage, son a damage dealing-warrior and his daughter is a tank. Heroland makes constant digs at RPG cliché, be it palette swaps on otherwise identical mobs or weary lesser enemies moaning about their motivation. 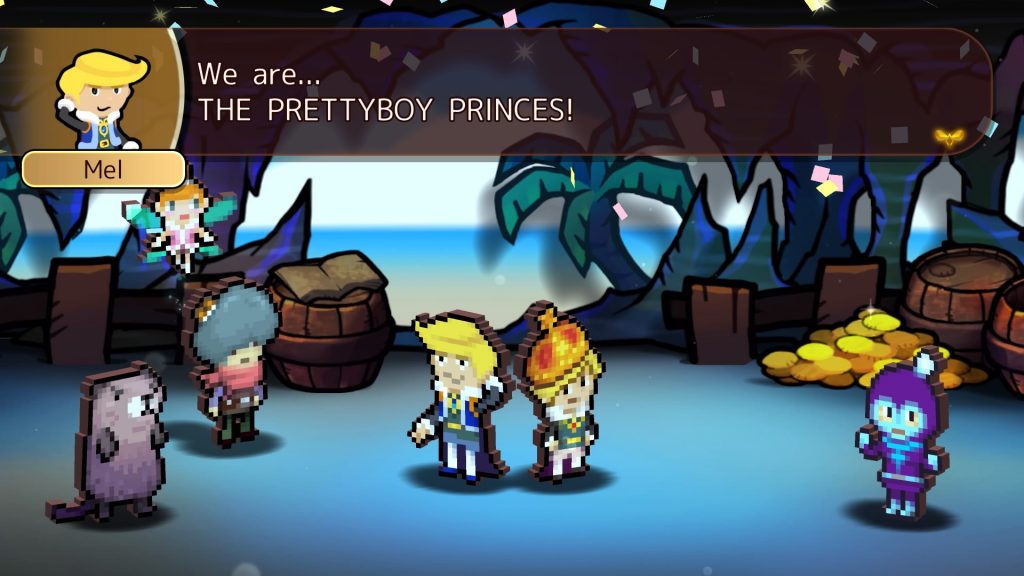 Your role as tour guide initially doesn’t extend beyond making sure your charges are healed occasionally. Rarely will you be called upon to resurrect any party members for example. Nor will you need to influence your party’s actions at all. Once you get to around character level ten the challenge starts to ramp up a little bit, your role needing to be a bit more than a passive observer. You can suggest the next move for a character, but you’ll still feel like your role is a little arm’s length. Each tour you provide for VIPs is made up of several events, typically a half dozen or so battles concluding in a boss battle. Every one of the enemies you’ll face is also a salaried employee on shift, just like you are. This all adds to the feeling of breaking the fourth wall, especially when you chat to them between missions. Your primary goal is to get a good customer rating from each.

At the end of each individual battle you’ll see the happiness level of each customer up to a possible maximum of six. Characters will gain happiness from landing the winning blow in a battle and by receiving loot at the end. You can also trouser loot yourself to decorate your room, but it’s a cosmetic detail at best. Once you’ve beaten the boss in a tour you get a rating for the whole tour with your party members gaining experience and friendship. After you reach friendship level two for each of your companions, you’ll unlock the respective sidequest for them. This is useful for boosting your friendships with each, especially given you’ll need to reach a level nine friendship for the respective friendship trophy. Some of the more amusing dialogue happens during these sidequests, Cobol’s family quest being a particular highlight. 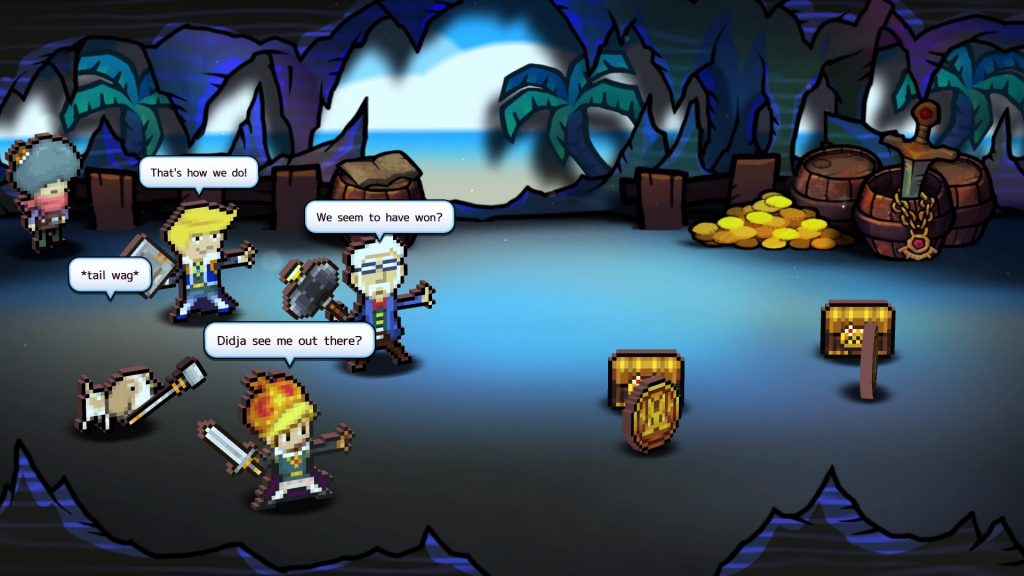 Unfortunately it’s all too easy to find yourself bombarded with sidequests early on in the game. These quests happen in the same themed dungeon as your current chapter. However, what Heroland fails to do is give you the heads-up that if you haven’t completed a sidequest at chapter’s end, you lose the opportunity to complete it by normal means. Yes, it gets shunted into the ‘play again section, but the fact the game doesn’t communicate this at all is an annoyance.

Another early frustration is the lack of inventory slots, at the outset you’ll have three. This isn’t an issue to start with as you’ll soon unlock a fourth slot at level five. Annoyingly you have to wait a long time for the fifth slot to become available, it not coming until you hit guide level thirteen. Conversely, you don’t feel like you’re bogged down by a cluttered inventory either. Your quest bag is limited as mentioned above, but your main storage doesn’t affect matters at all. No fussy inventory management is required anyway. 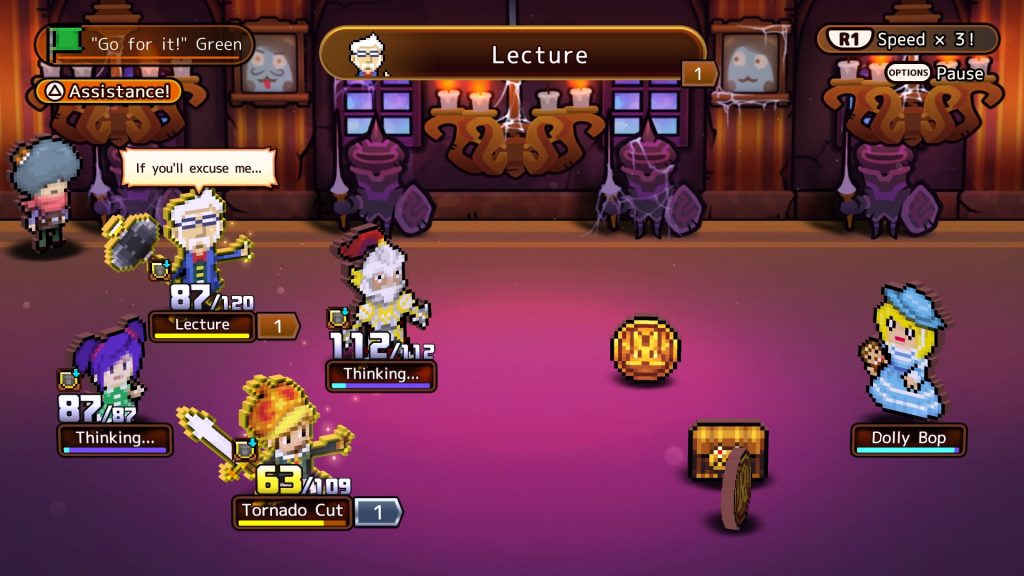 If it seems like we’re focussing on the negatives a little here, apologies for that. Our main gripe above all with regards Heroland is the unbalanced levelling. Any characters not in your party get fed a few scraps of experience at the end of a tour. However, unless they’re regularly rotated in and out of your party, they end up way behind the level requirements of the main story quests particularly.

On our playthrough we stalled for a long time at the end of Chapter 3 due to mandatory party members being level seven, where level twelve was recommended. Cue lots of joyless grinding to get them to a point where they’re not killed immediately and hoping you don’t run out of revive pots before the main boss. Had the prompt for sidequests we mentioned earlier been present, perhaps the problem wouldn’t feel so acute.

In addition, the sheer amount of dialogue from particular NPCs can make this an interminable slog at times, sometimes you just want to get to it. We’re all for fleshing out the plot, but when it comes at the cost of pacing it gets a bit much. Our man Fortran can be a bit verbose on occasion, put it that way. 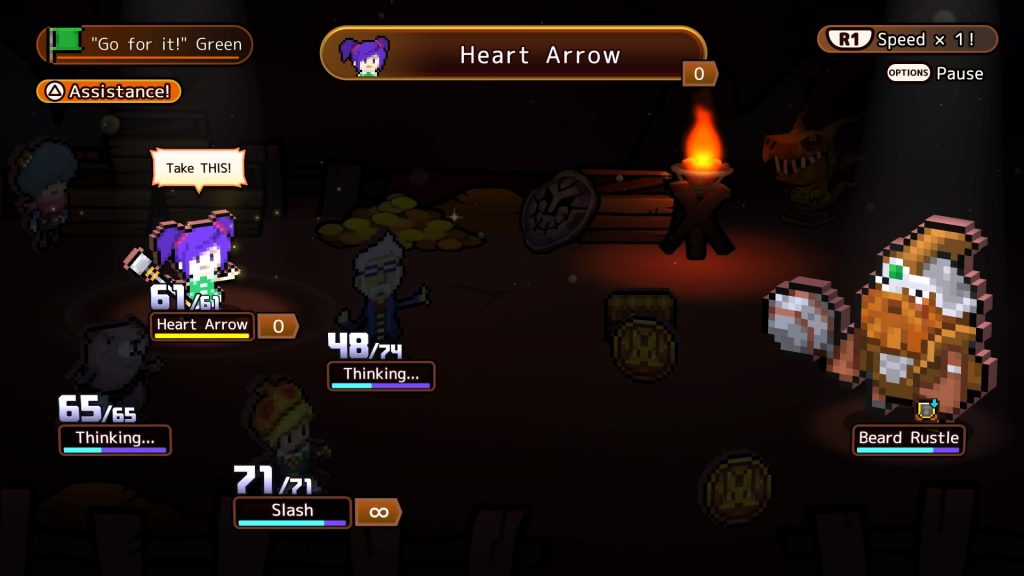 You could probably get through most battles with one or two downed allies but the margins for error are slim. Along with the fact you can only carry two revive pots and (early on at least) they’re your only means of resurrection, you’ll not want to be over-reliant on consumables. Also if you finish a tour with a downed ally, your satisfaction rating takes a nosedive for that character which affects your earnings. Talking of consumables, if you go into a tour under-stocked you’ll be met by the shopkeeper who’ll very helpfully stock up your equipped inventory items. Refreshingly, you don’t pay an extra premium for this service.

Though the blacksmith shows up to repair your weapons in some dungeons, but charges a flat rate of 499 currency, regardless of how many weapons end up needing repair. A bargain if you’re on the ropes perhaps, but less so if your weapon durability isn’t really an issue, especially when you’re grinding easier dungeons. 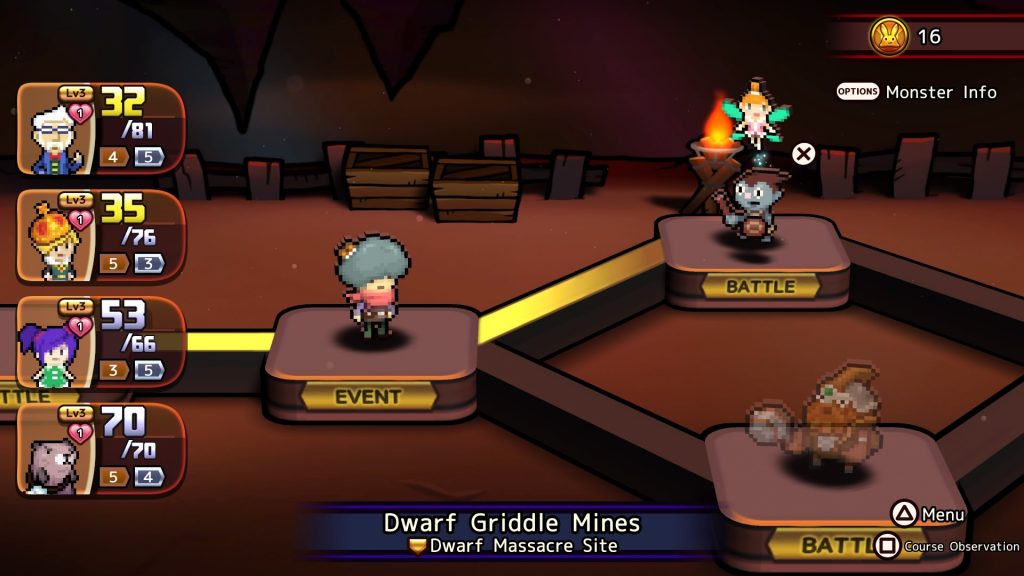 Yet despite the issues we’ve mentioned, we quite liked Heroland. Yes, the grinding is a chore and the occasionally clunky plot we enjoyed ourselves for the most part. The existential crisis side character Otterman finds himself in is frequently amusing just as the daft nods towards RPG tropes often ring true. Trophy hunters looking for their next easy platinum should probably look elsewhere, but for fans of JRPGs Heroland is a worthwhile odyssey.

Heroland
7 Overall
Pros
+ Storyline is engagingly daft, though it labours the point a little
+ Shopkeeper pops up at beginning of each tour to replenish your inventory
+ Gameplay is compulsive despite grind
+ Inventory clutter is minimal

Cons
- You can hit a virtual roadblock due to underpowered mandatory characters, the grind is real
- Reams of unskippable dialogue can make for a boring experience at times
- Limited inventory space of particular items is an annoyance
- Sidequests become unavailable at end of respective chapter

Summary
Heroland is a great localisation of a interesting twist on the JRPG format let down slightly by a few mechanical issues. Yet its pedigree shines through. p.s. Trophy whores need not apply.