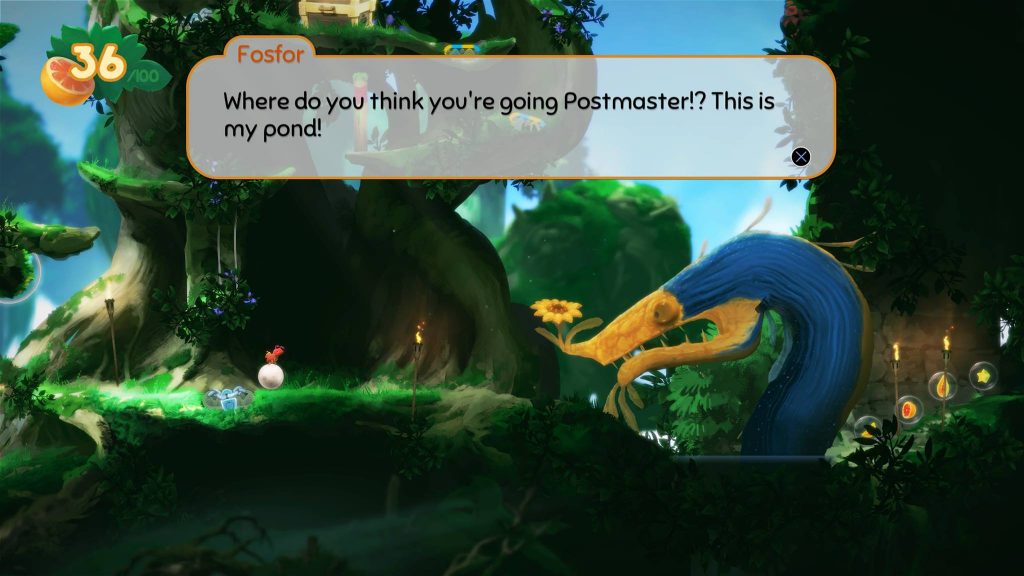 It’s fair to say that the Metroidvania sub-genre is one that has enjoyed a resurgence as of late. The likes of Axiom Verge, Owlboy and Ori and the Bind Forest have been leading the charge of big 2D worlds which focus on a sense of place as a main draw as opposed to more linear platforming titles. While these are all examples of great games of the type, they all feature gameplay experiences that are not too dissimilar from what have come before, being either combat focussed shooters, platformers or puzzlers. It seems that the genre is quite hard to innovate in due to its very nature and while these games have a smattering of elements that makes them stand out, their systems rarely change. Yoku’s Island Express changes things however. On the surface it appears to be another charming platformer with a large explorable world, but underneath is a unique and utterly intriguing pinball mechanic that not only governs traversal, but also the main puzzle elements of the game.

You play as Yoku, an infectiously happy dung beetle who has taken a job on Mokumanu Island as the new postmaster. Yoku travels to the island in the hope of soaking up the rays in his new found tropical home, while also keeping down his steady new job, but things aren’t quite as idyllic as he would hope. It turns out that the island’s guardian deity has been attacked by a being known as the god slayer, putting him into a deep sleep which causes nightmare induced storms to envelope the island. To return everything to normality, Yoku must keep up with his postal duties while also assisting the island inhabitants with their own personal needs which range from assisting a family of rabbits by evicting some soot creatures that have invaded their home, finding mushrooms to feed to a stubborn lizard beast that blocks your way or assisting a cordyceps style fungal mushroom with the infection of the various areas in the world. 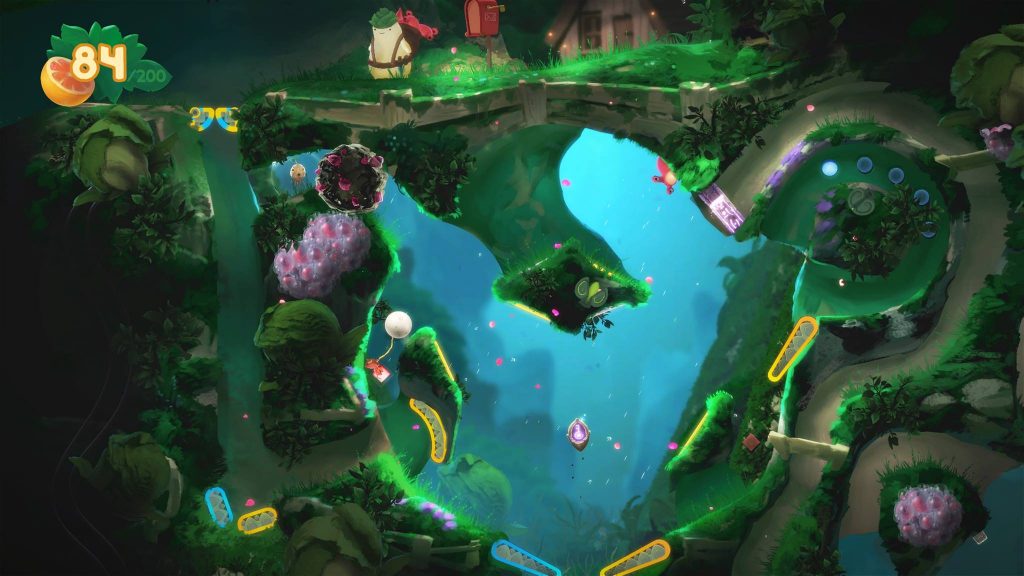 The last example in the previous paragraph demonstrates the kind of sense of humour that is infused into Yoku’s Island Express. The team at Villa Gorilla are comprised of three people, two of which come from Starbreeze, who were responsible for slightly more harrowing games such as The Darkness and Chronicles of Riddick. It’s clear that while Yuko’s Island Express is a game that can be seen as friendly to children due to its colourful look, there are areas of the game and narratives that benefit from mature subject matter, such as the aforementioned cordyceps brain infecting fungus and an island deity that looks like what would happen if you asked Studio Ghibli to draw Cthulu. It’s very hard to make a game that is open to a child demographic without needlessly pandering and this has been handled beautifully by the team.

As per the Metroidvania mainstay, Mokumanu island is a large and intricately built world, with tunnels and passages that lead into areas such as lush green forests, snowy mountaintops and subterranean hot springs. As previously mentioned, this is not your average platformer. Instead your main means of traversal is through a series of pinball challenges that connect each area with village sections in between. These are designed organically with Yoku being attached to a ball that gets flipped around each section, collecting fruit as currency along the way. Each pinball section usually features a secondary activity, such as additional collectables or things to break that open shortcuts to previous sections to make your life easier. 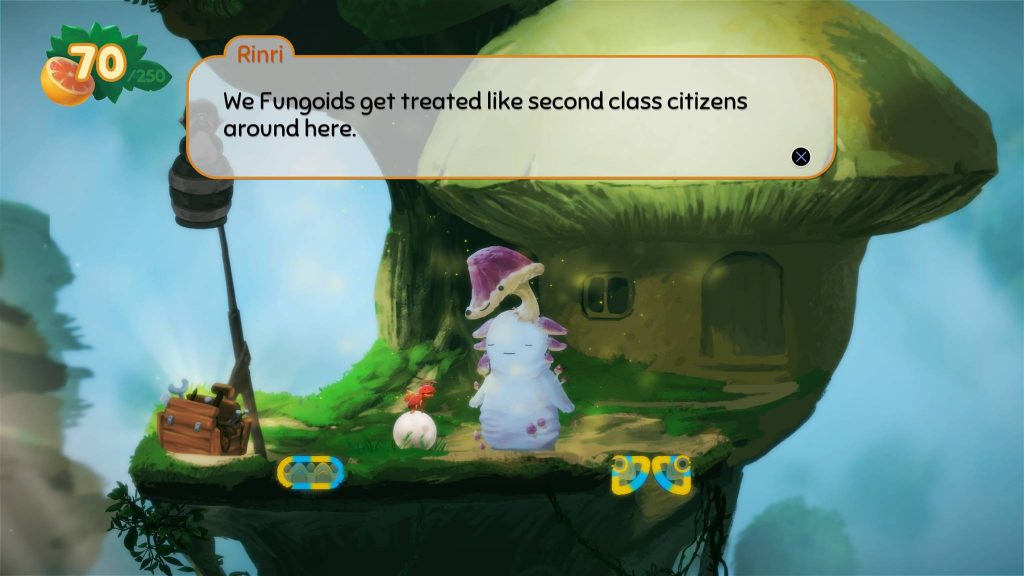 Mechanically the pinball sections function very well, with some realistic ball physics which are only slightly influenced by Yoku’s dangling body as he catapults each arena. At first these are very simple, allowing for a wider margin of error, making progression a breeze while also teaching the basics of the premise. Most pinball sections feature a series of tunnels and nodes that you must hit in succession a few times to reveal a purple gem. When enough gems are collected, this opens a purple gate that allows movement onto the next area. As the game progresses, these gems get harder to hit and far more plentiful in their quantity.

Pinpoint accuracy during these sections only matters to a certain degree however as the punishment for falling into the thorny drain only has a minor consequence, each time you fall you lose some of the fruit currency that you have found instead of losing a life or anything as drastic as that. Some may bemoan that this removes any sense of stakes or challenge and while that is certainly a factor to a degree, it’s not overly a problem because it makes the game more relaxing as a result and rids players of an archaic life system that would probably end a few playthroughs early. 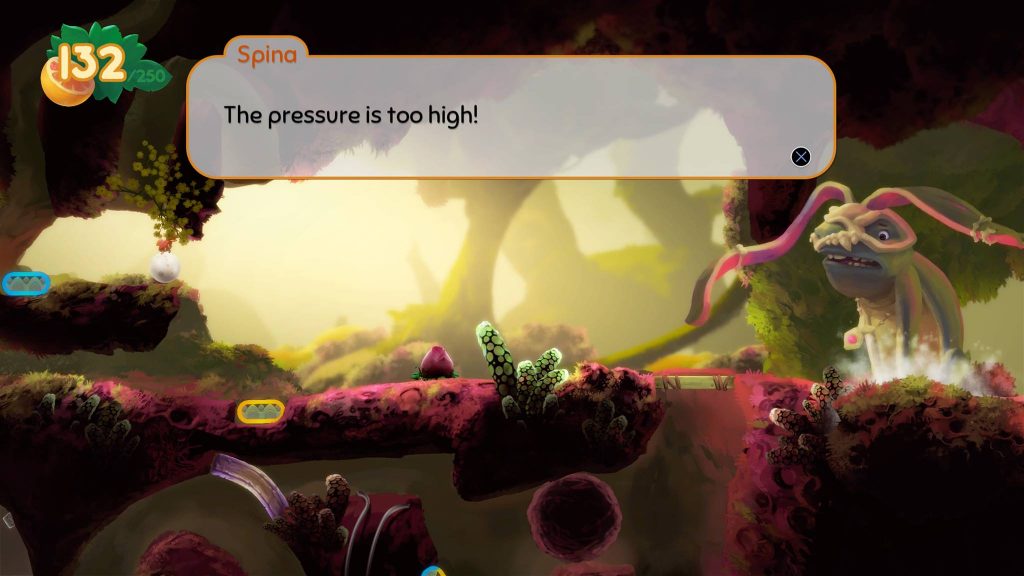 The brilliant and unique game system is flanked by colourful and lush visuals that brings the island and its inhabitants to life. The organic feel of the connected world takes a lot of benefit from this, particularly when Yoku climbs from one area to the next with the visual style changing as he does. One standout for this was the climb from the mid-level of the island into the snowy, mountainous highland terrain. The mood, visual style and the ambient soundtrack seeps seamlessly into the other with no loading in between. This happens for each area transition and demonstrates the sense that Yoku is on a journey beautifully.

From these elements, the gameplay style and excellent use of the Metroidvania framework, Yoku’s Island Express is another standout for the genre. It has seemingly come out of nowhere and has surprised me greatly with just how well it handles this combination of elements. The game is unique, impressive, relaxing and most importantly fun which is such a rare combination these days.

Yoku's Island Express
9 Overall
Pros
+ The pinball/ adventure gaming concept is genuinely innovative
+ Charming character design
+ Beautiful visuals
+ Features a large and congruous world
Cons
- May frustrate a little if you have trouble with accuracy in pinball
- There are no real stakes to consider when failing in areas
Summary
Yoku’s Island Express is a unique take on the pinball, platforming and adventure genre’s. Not only does it blend these gameplay styles beautifully, it matches these with stunning visuals and a vast world that just deserves to be explored. Truly innovative and delightful in every way.