The original Disco Dodgeball found some success as an enticing party game that lacked longevity. 82 Apps have returned with a rejigged version with some new features. Can the new coat of paint reinvigorate a title that ran out of steam? 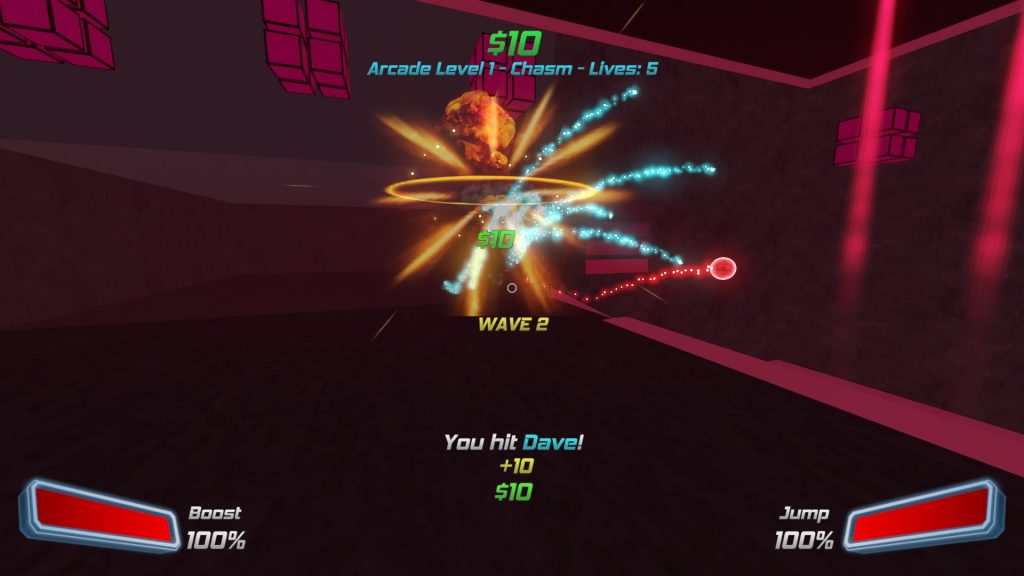 Disco Dodgeball Remix’s gameplay remains unchanged from the original. Dodging and shooting balls feels pretty good and shots can be charged holding the right trigger. Your spacial awareness is tested with all the action taking place from a fixed viewpoint. The first-person option seems serviceable enough. Movement is quick with a temporary boost available to put space between you and your opponents. A jump allows you to gain height although it does seem a little limiting. At times, it feels more like a hop. There’s a timing to it which I haven’t quite figured out so put it down to my clumsiness.

One of the criticisms of the original release was the lack of a reason to keep playing. What was on offer was a good party game that ultimately felt a little short-lived. This remix now contains a progression system where each hit and completed objective gains experience. A multiplier is at play for trick shots and kill streaks. There’s also medal awards for completing certain objectives within game modes which unlock further bonuses. This sense of persistence does help players keep their foot in as the matches roll in. 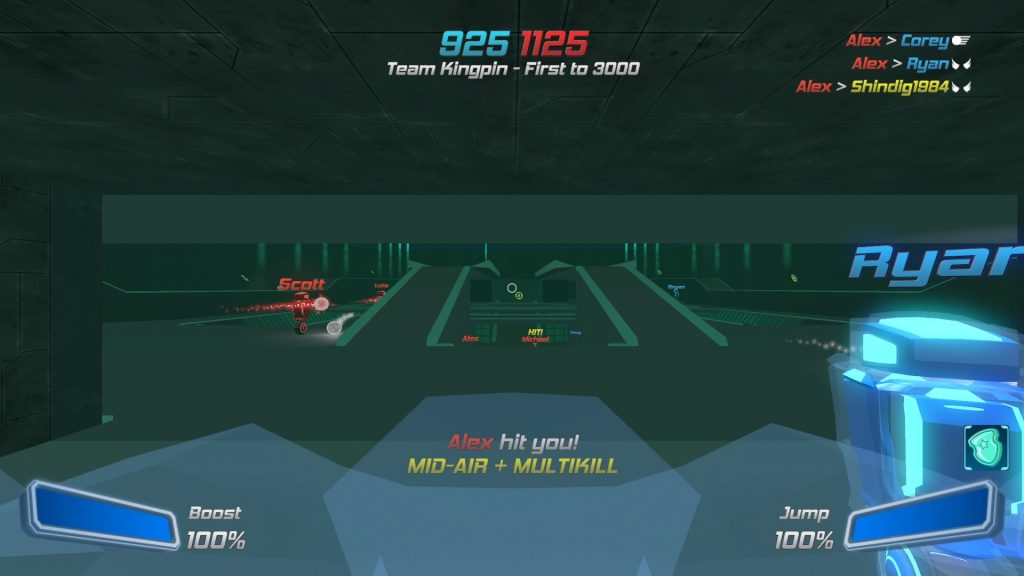 There’s plenty of modes on offer for both single competitors and multiplayer groups. Arcade mode has a progression of its own as you survive waves and tackle special enemies. Money you win can be traded in between rounds for bonuses like extra multipliers or additional lives. There’s eight levels to it with three waves to conquer. Bosses spawn after two rounds and it’s a nice challenge against bots which perform admirably. They’re rarely looking to nail you from half a world away and there’s enough space in the arenas to head away from the pack.

Arenas do tend to offer different traversal challenges. Some contain jump pads, multiple levels and offer plenty of corners to hide or provide cover. Some work better than others. I hate being funnelled into corridors and some offer real tight quarters to fight in. It feels like a game that plays better when you have space to utilise. 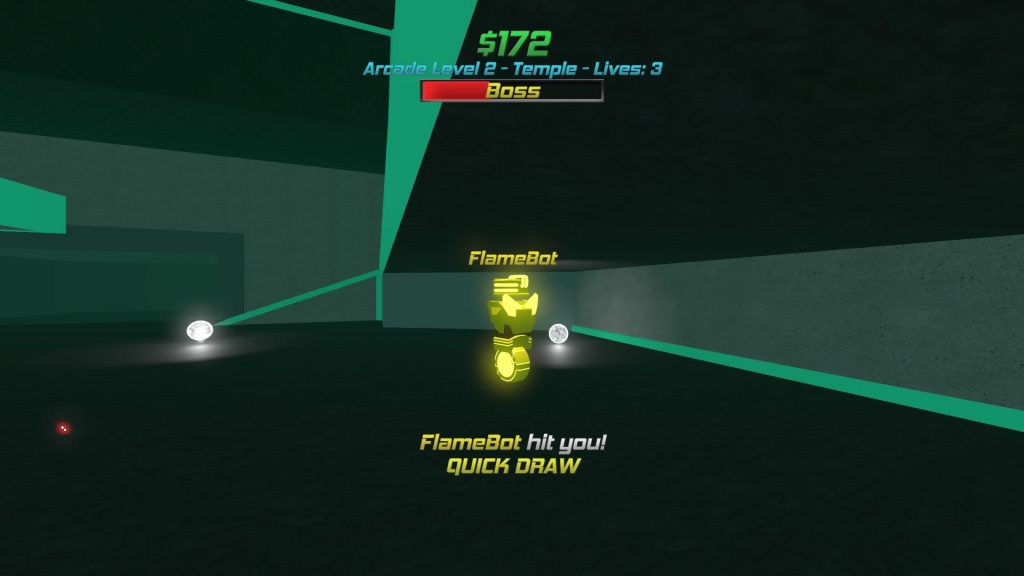 Challenges offer single-round excursions with different caveats. Some offer you a score rush, defending an objective and looking to avoid onslaughts. There’s a variety to them and you can also change the arena to suit your style. They’re bite-sized but offer leaderboard support so you have something to chase beyond beating your personal best.

Aim is still a little tough to judge. You’re usually tackling moving targets and arenas contain a lot of slopes, walls and opportunities for jumps. You’re often trying to lead targets or hoping they hesitate when turning. Forcing them through narrow gaps can help pin them down and you have sensitivity and aiming options to help fine-tune the experience.

Arenas themselves contain plenty of colour and a visualiser helps give the angular boxes life. As the match culminates, so does the colour palette. It’s a nice flourish to geometry that would otherwise look a little drab. Successful hits or catches explode satisfying. Music compliments the pulsating visuals with a jaunty electronic score. A confident announcer bellows on each hit which helps you keep track of what’s happening. There’s good feedback on offer with each successful strike. You know exactly what you got experience for and can then use that to maximise your experience points. 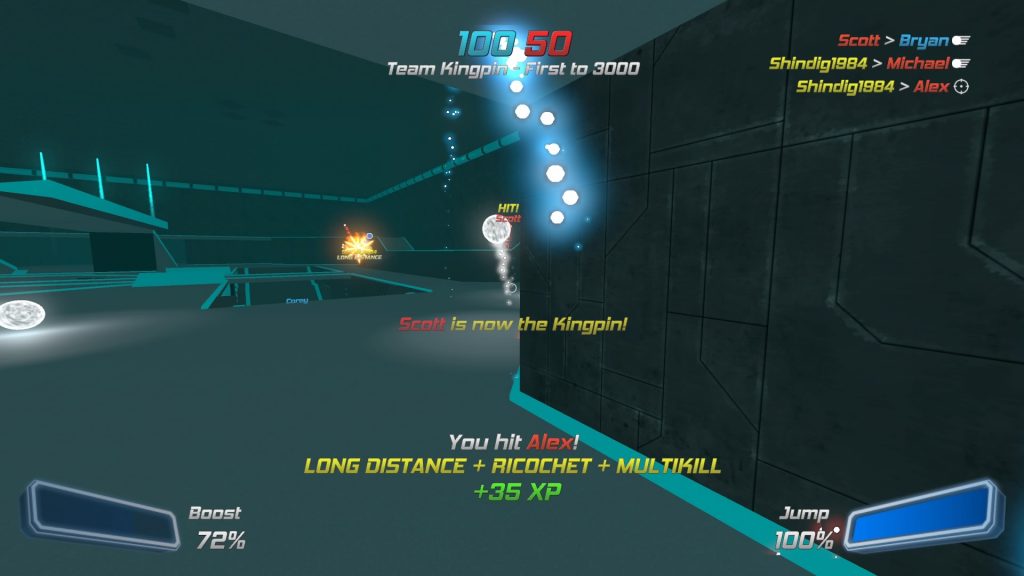 The health of online competition is difficult to gauge. Quick play shows that Disco Dodgeball Remix doesn’t like to keep you waiting. If there’s any human players about, they’re pulled in quickly and supplemented by bots. As a result, if you’re looking to squad up with friends, you’re going to need to create the room yourself and disable bots. It would be nice for the search to hold back a little to see if more human players can join the fray. That said, bot support does eliminate the problem of the player base being strung a little too thin across server locations.

I’ve been enjoying Disco Dodgeball Remix. Some of the arenas seem too tight to enjoy and the idea of quickly getting online games going does hamper encountering actual players. Despite this, there’s enough to keep me interested in what is a varied effort.

Disco Dodgeball Remix
7 Overall
Pros
+ Simple to grasp and addictive.
+ New character progression gives players a reason to return.
+ Colourful, vibrant style.
+ Plenty of modes to invest your time in.
Cons
- Some arenas lack the space to make movement feel important.
- Bots are capable, if a little frustrating.
- Online quick play way too eager to fill the lobby with bots.
Summary
Disco Dodgeball Remix manages to add some longevity to a game that originally ran short on time. The player progression and the variety of modes help stave off potential boredom. The game's playful colour and style remains compelling after three years. Whilst the online does seem to be hampered by the urgency to get you playing, there's a lot to keep you occupied and it's mostly enjoyable.