From Chinese developer Coconut Island Studio comes Shio, one of those hardcore platformers that requires skill, patience and tenacity to overcome. If you’re a fan of Super Meat Boy, 10 Second Ninja X or similar titles then you may want to check this out. 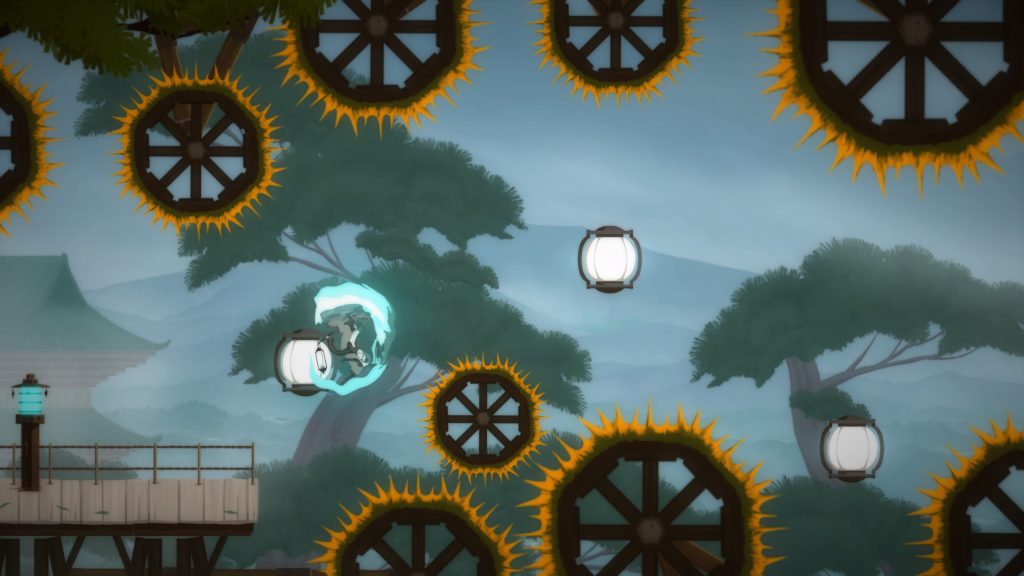 For a game primarily concerned with difficult platforming there is a surprising amount of story in Shio. Whether it was down to the purposefully mysterious character dialogues or the translation or a combination of the two I quickly lost interest but you play as a masked man who keeps encountering the same people and having strange dreams. You collect parts of a diary, items and letters which flesh elements out as well but it was not for me. I was far more interested in the gameplay.

As with any decent platformer you have your basic controls and these never change. You never gain a new ability or anything like that, the game simply introduces new mechanics and develops and layers them to add challenge. In Shio you can jump and if there is a lantern you can press jump again and you will use it to bounce in mid air. Each lantern has a different amount of bounce but the range at which you can activate them is quite generous. From here you can imagine the chains of lanterns you’ll have to combo to get from one platform to another, both horizontally or vertically and with hazards all around.

There are four ‘chapters’, each made of multiple checkpoints. You could call each checkpoint a level, and using a mask you can return to any checkpoint at any time. You are timed and given a goal time to beat if you want to go for trophies or are a completionist. The first three chapters have around thirty levels each, whilst the fourth only has five but is more punishing. Someone who knows what they’re doing could probably get through the game in a couple of hours but new players will take much longer as you die over and over to learn the levels. Luckily death only sends you back to the last checkpoint. 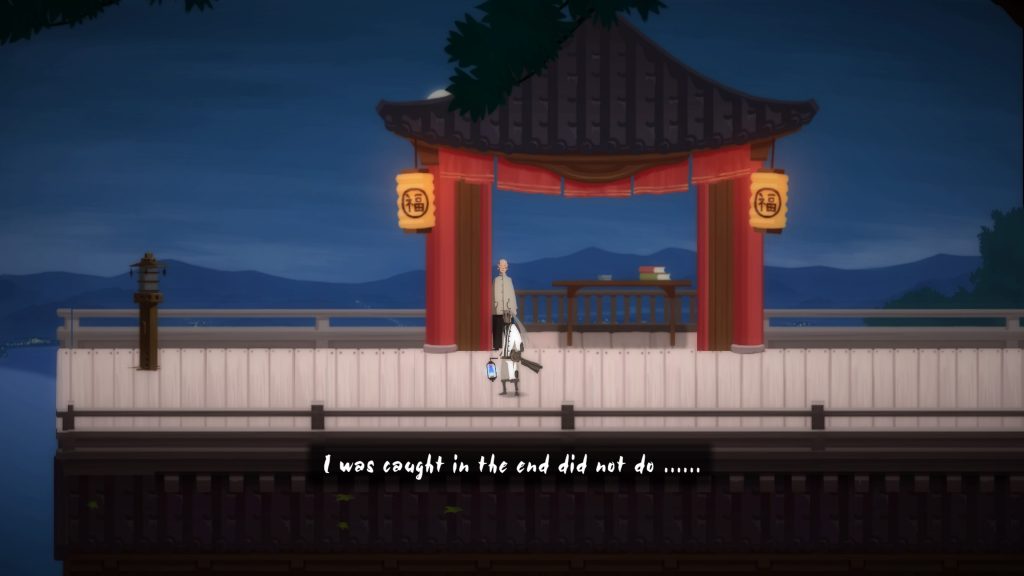 Each chapter has its own theme and will introduce multiple new hazards and mechanics to adapt to. Generally once you move onto the next chapter those same hazards and gimmicks are forgotten and replaced with a new set, which is brave but gives each chapter its own feel to go along with the design aesthetic. You’ll encounter fireballs early on, then gusts of wind or fog that obscures your view until you light a lantern as well as many other things. The variety and construction of the obstacles is definitely Shio‘s strong point.

The visual design should also be mentioned however. The style and animation on your character is great and some of the backgrounds look fantastic too. Certain elements, like large saw blades look obviously scaled up from a smaller asset but in general the visual presentation is very nice. Similarly the sparse soundtrack is very pleasant. There doesn’t seem to be many different tracks but they’re subtle enough that they don’t start to grate.

There are a couple of difficulties to choose from, Shallow Dream (easy) or Deep Sleep (hard), which feature very similar levels but offer fewer obstacles or more platforms. You can only access hidden challenge rooms on the harder difficulty too. I would suggest going straight for Deep Sleep as they aren’t actually that different, so if you can overcome Shallow Dream you should also have the skills for Deep Sleep, plus you’ll get access to the extra content, but it’s nice to have a choice. 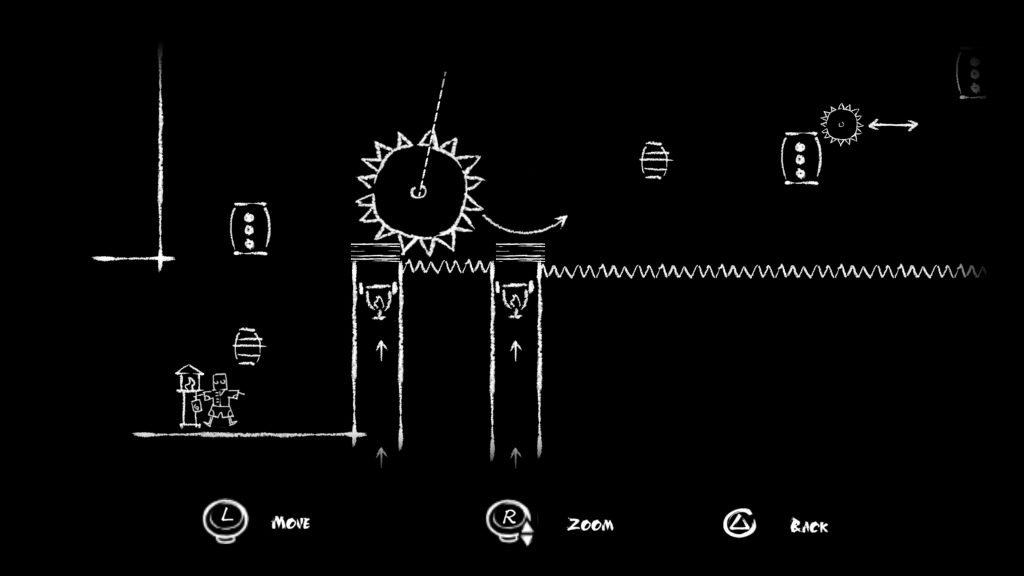 You’ll encounter similar issues on each difficulty too. I feel the camera is in too close, not giving you enough spacial awareness to be able to anticipate what’s coming up meaning a lot of your progress is going to be based on trial and error and learning the level layouts. At the beginning of each section you can press

on the checkpoint and it’ll show you a crude drawing of the upcoming challenge but it only gives you a basic idea and doesn’t give you a clear idea about moving parts, for example. Your character is also positioned on the bottom third of the screen which is nice aesthetically but does mean if hazards come from beneath you or if you’re dropping down then you have less time to react.

The game hitches every now and then too, often enough to be worth mentioning. It didn’t result in death all the time but when it did it was massively unfair. Once I loaded the game up and it had set itself to Chinese language and once all the moving elements of a level failed to activate making progress impossible, but these did only happen once. A more common problem is being unable to pause for no real reason, the button just stops working meaning you can’t pause and can’t access the options or go back to the title screen without shutting the game off completely. 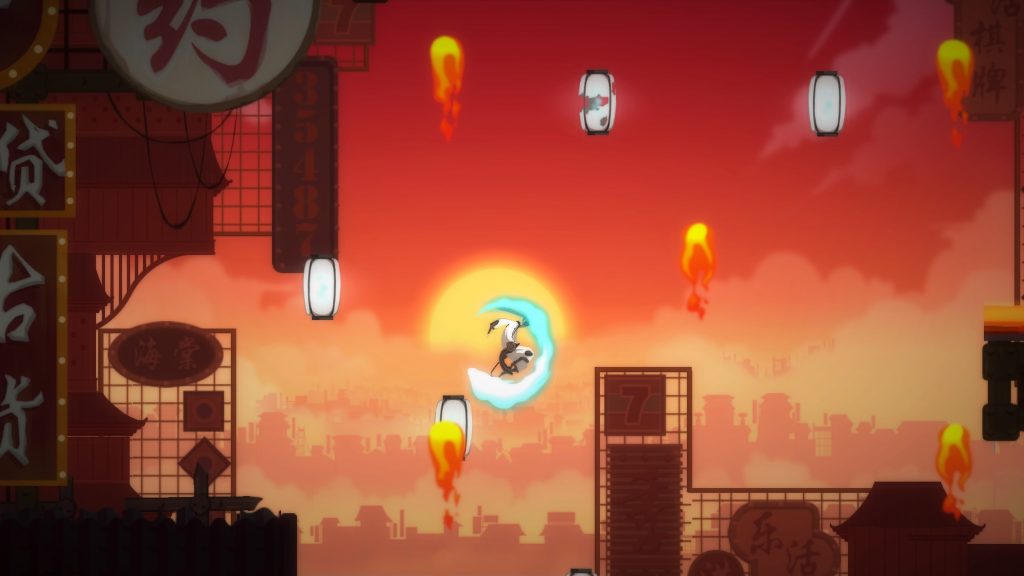 Shio definitely has problems, but after I’d finished it I went back and got all the collectibles. I thought I was done but then I went back and beat the best time on each section. I’ve now unlocked all the trophies bar the ‘True Ending’ one (which I have no idea how to get, if you have any idea let me know. Thanks!). Shio, slightly to my surprise, had its hooks in me. The frustration brought on by the difficulty and some design decisions had turned into appreciation. If you’re predisposed to this type of game then you’ll definitely enjoy the gameplay part of it, if not so much the story. The well designed levels and challenging gameplay are set just right, for the right kind of player.

Shio
7 Overall
Pros
+ Excellently designed levels
+ Great presentation
+ Constantly introducing new mechanics
Cons
- Camera is in too close
- A few technical problems
- Story gets in the way more than anything
Summary
Shio isn't perfect, but offers the right type of player a challenging platformer which rewards patience and tenacity.

One thought on “Shio – PS4 Review”