The House of the Dead is a series that has had more chances then most Sega franchises. There were ports on the Wii and PS3, but the original title has always been missing from these modern (from two generations ago!) releases, with them instead concentrating on 2 onwards. Forever Entertainment, the devs behind the Panzer Dragoon Remake, have rectified this however as The House of the Dead: Remake comes to PS4. 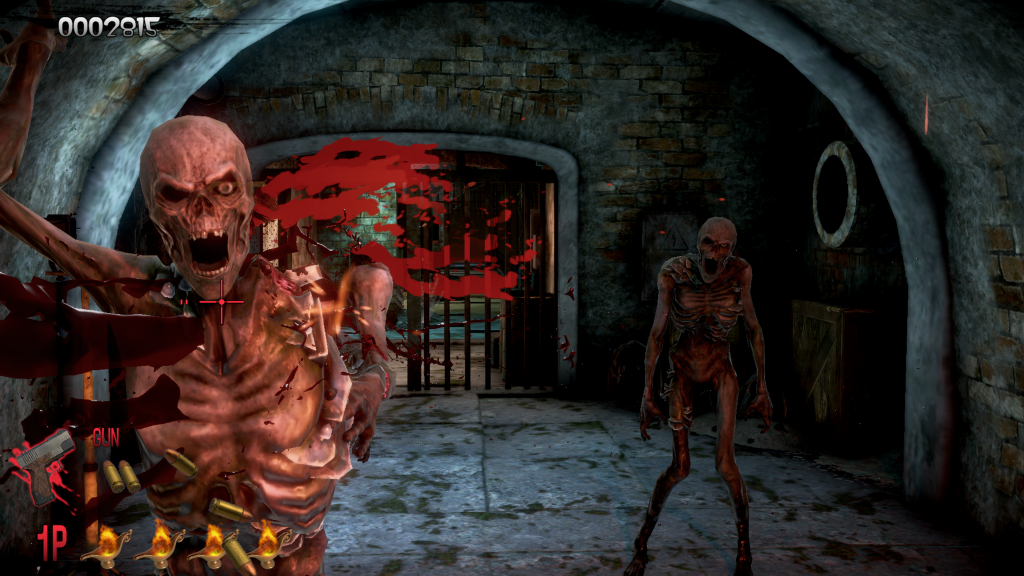 I had the Sega Saturn version of The House of the Dead. It was a pretty rough port, but only visually. It could have been better in that department but gameplay-wise it was a hell of a lot of fun. Pointing a light gun at the screen to blow limbs off zombies as you made your way through Dr. Curien’s mansion to stop the mad scientist from creating his army of undead monstrosities. Unfortunately as a society we have moved backwards since this time – light guns aren’t really a thing any more.

This is fully playable on the PS4 though, so you’ll be moving on rails through a shooting gallery effectively. The action is viewed from a first person perspective and you must kill all the enemies the game throws at you. Some will run up to you, some will throw things at you and some will be attacking scientists which you need to try and save in time. Shooting a zombie once won’t be enough, even shooting off limbs and sometimes their heads won’t always be enough to stop them. Just keep blasting your way through the four stages, each concluding with a boss fight and you’ll reach the end in a short amount of time. This was an arcade game after all. 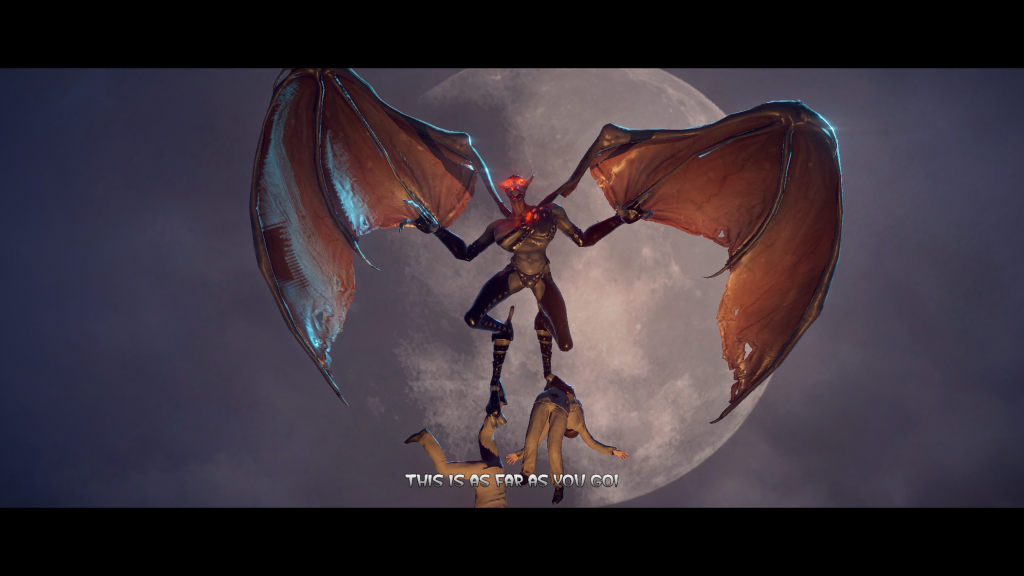 The House of the Dead had branching paths however, increasing the replay value as you could explore the environments and see new areas and new enemies and layouts. You ultimately would end up at the same boss but discovering you could see a new area by shooting a lock off a trapdoor or taking a hit from an enemy is super cool. Similarly saving all the scientists is not an easy task so trying to get that perfect run is very enjoyable and this remake will reward you for it, which I’ll get to later.

As an arcade game it’s very shallow, of course it is. It always was but the interaction of firing a plastic gun at the screen elevated the experience massively as it did with all light gun games. Obviously that’s not possible here. 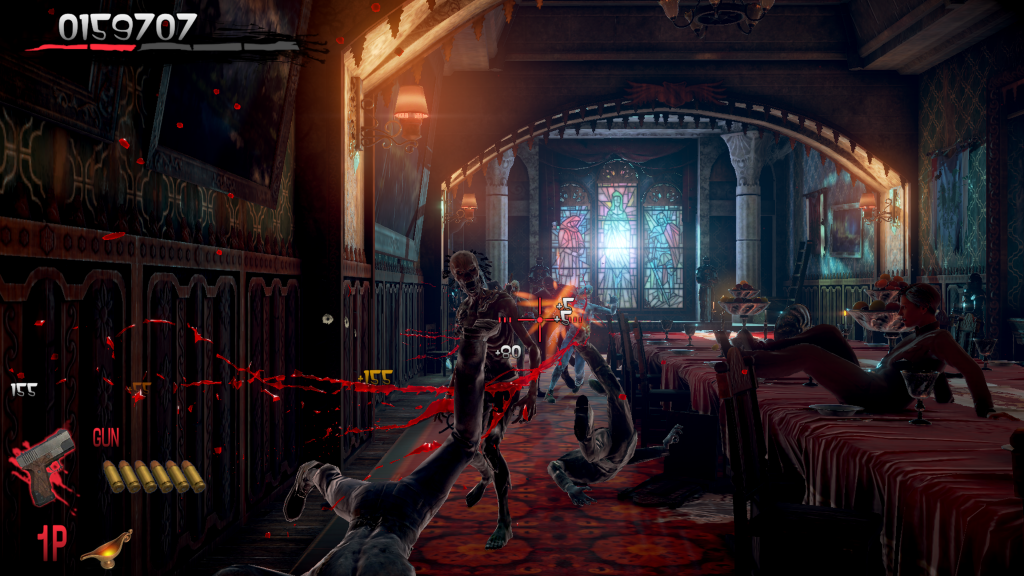 As such you have two options for shooting your virtual guns at the zombie horde: you can move a reticule with either analogue stick, using

to reload or you can use gyro aiming. The buttons are the same in this mode but you can move the reticule with motion controls by moving the controller around. To be honest, I really disliked it. I played with the analogue stick and did fine. I then tried the gyro controls and faired far worse, they did not feel good to me and you need to constantly recentre the reticule as it drifts off course. Maybe you could play with the options a little to improve it but by default I did not enjoy it.

Either way without being able to simply point a gun at the screen, rather moving a reticule around like a mouse cursor, a large part of the magic is lost. The devs have said they will patch in Move support which still won’t be a perfect recreation of the light gun experience but I got a decent amount of joy out of the light gun games that were on the PS3 so I’m looking forward to them being implemented. 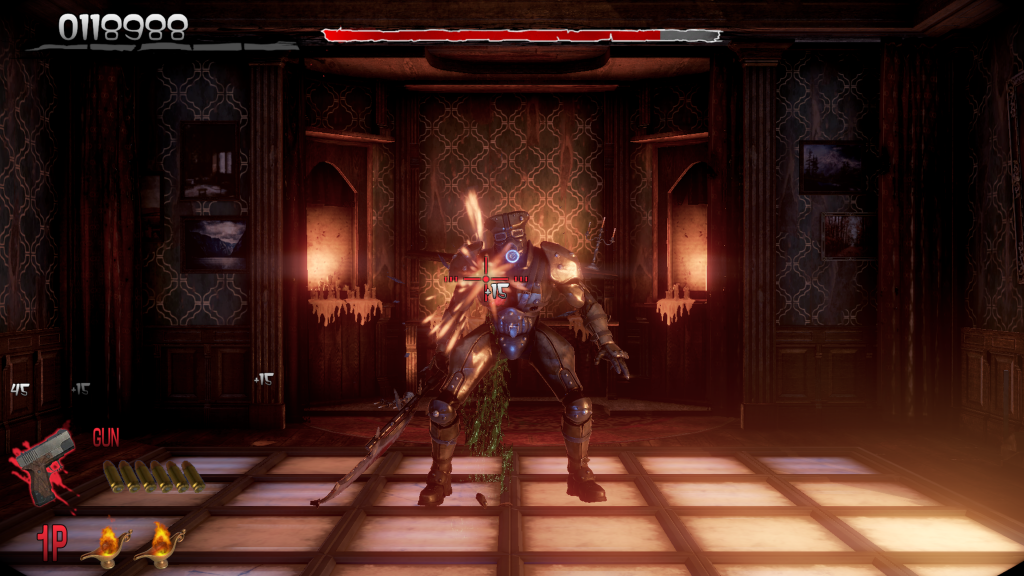 This isn’t just a straight port of the 1996 release however. The visuals have obviously seen improvement. They aren’t amazing or jaw dropping or anything, which given the narrow scope of the locations is a shame as I imagine there are a lot of polygons you can throw at quite small areas and limited enemies but it looks fine. The zombies still blow apart and extra gore effects have been added so blood flies everywhere. The zombie corpses have physics applied to them now as well so they’ll flop around and get thrown backwards as you blast them which is both satisfying and silly. I’d have liked a bit more destructibility in the environments as rooms get destroyed by stray bullets but as there are certain barrels and boxes to break that contain points and life maybe they didn’t want to confuse things. When other boxes or bottles don’t break however it takes you out of the moment.

Something that new players won’t notice but fans of the original will is the music. Whether through licensing or some other reason none of the original tracks are in this package, instead replaced with music that often sounds very similar and always thematically accurate. It takes away from that nostalgia hit that I’m looking for, but none of the music is bad, it’s just not ’90s Sega. Voice lines have also been redone but still keep that poor/cheesy charm, but get used to being told to reload your gun when it’s empty. I’d appreciate an option just to turn that down/off if possible. 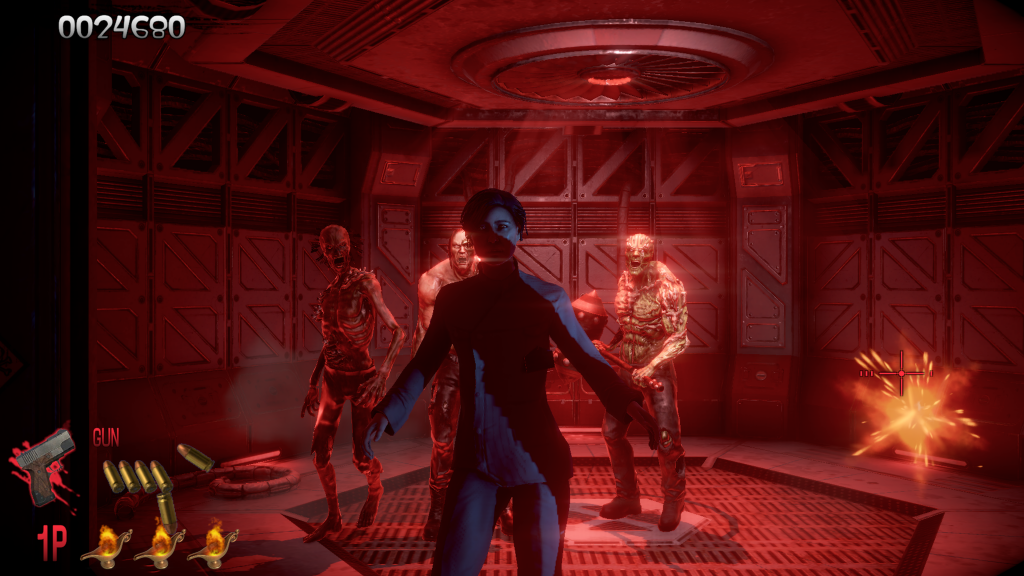 You now have two modes to choose from at the start. Original is a straight remake of the arcade version, whilst Horde is similar but increases the amount of enemies exponentially. Each mode has difficulty levels, different scoring modes and cooperative and competitive two player (offline) if you want. The amount of zombies in Horde mode is often overwhelming, event the camera isn’t sure where to look, so having a friend along for the ride wouldn’t be a bad idea but there are also unlocks you can get which will help by completing in game achievements.

These achievements correlate directly to the trophies and are a great way to improve the replayability of the game. They want you play well, in different ways, see everything and do certain specific challenges. Doing some of these will also unlock goodies like new weapons and cheats which is a nice reward beyond a trophy. It’s a good example of the trophy system enhancing a game which would otherwise have been a short, potentially one and done experience. 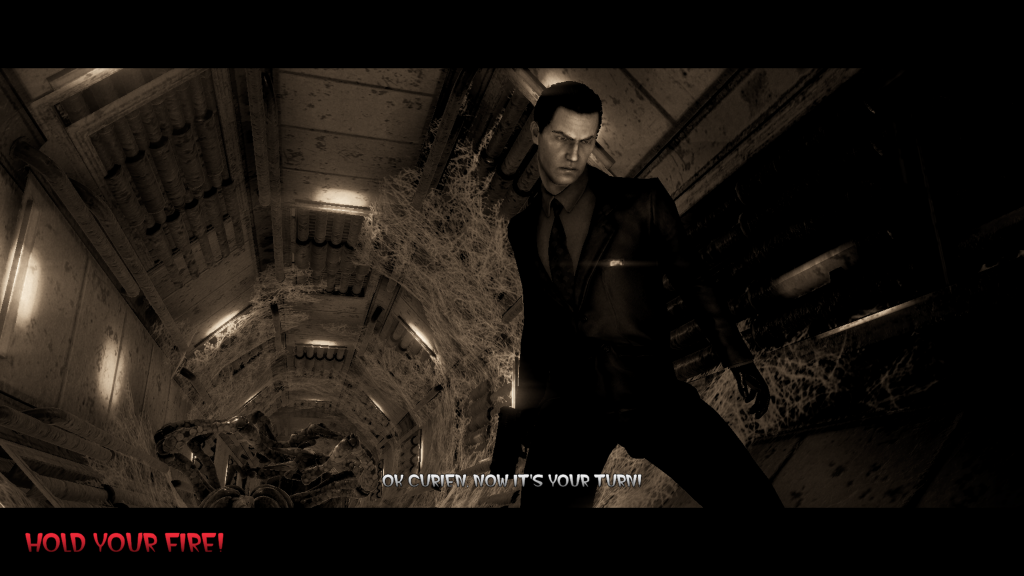 However the lack of light gun with this light gun game can’t be ignored. Maybe one day we’ll, as a people, realise our mistake and the light gun will come back in a big way and titles like this, Virtua Cop and Time Crisis will get the love they deserve. In the meantime this is a faithful remake. The team behind it obviously have love for the original and with the limitations in place, whether that’s licensing, budgetary or hardware, they’ve done an admirable job. Hopefully the Move patch comes soon as that will get it at least a little closer to that original experience. Until then this is a decent package and one of the few ways to play this classic now. It’s just some way off the best way to play it that has ever existed.

The House of the Dead: Remake
6 Overall
Pros
+ Short but sweet
+ Lots of replayability
+ Zombie shooting gameplay is still great fun
+ New modes
Cons
- None of the controller options do it justice
- Lack of original music
- Environments are very static
- Will be too short and shallow for some
Summary
The House of the Dead: Remake is a faithful port of a classic light gun game. The graphics have been improved a lot and there is plenty of replay value for what is ultimately a short arcade experience. Unfortunately none of the controller options come close to how it was originally meant to be played.