The source code for all three Panzer Dragoon titles is lost to time supposedly, but that hasn’t stopped the original Panzer Dragoon getting the remake treatment and now it’s landed on the PS4. There aren’t many Saturn games that get the credit they deserve nor do we generally see them getting modern releases so this is a very welcome sight that will hopefully lead to more in the future. 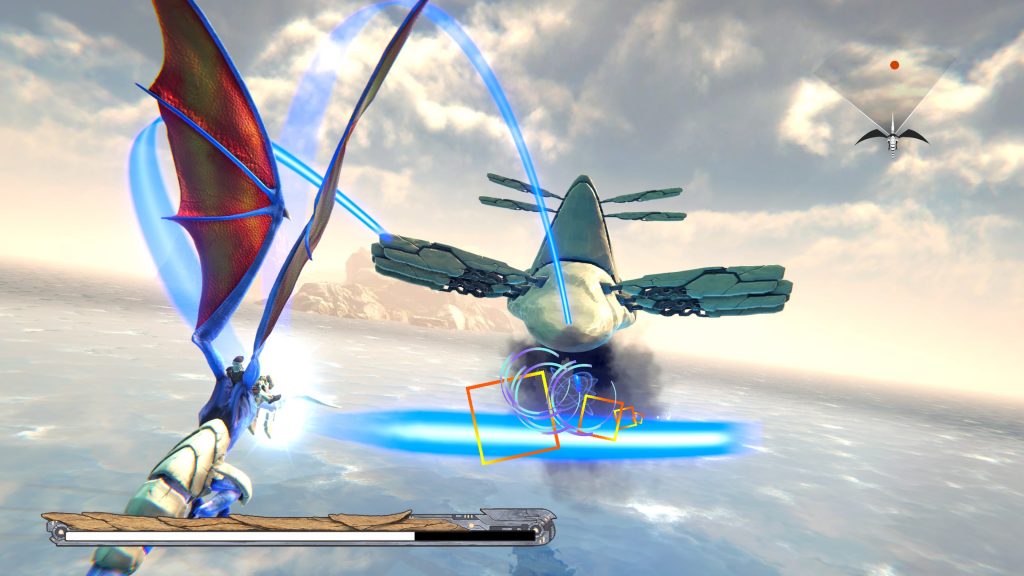 Panzer Dragoon is from the early 3D era, so rather than being an epic, story driven experience this is from a time when games were shorter, mimicking the arcade experience in the home. As such this is a much shorter game at just over an hour and the story is barely a factor, this is all about the gameplay. Again this is from a simpler time where 3D was in its infancy but there’s something to be said for laser focused gameplay.

You play as a man who’s heading back to his village when he’s attacked by a monster. He chases the monster down and encounters two dragons fighting. The rider of the blue dragon takes a hit and hands his dragon to the man, your character, stating that the other dragon must not make it back to their base. There’s a far deeper lore of an evil empire that’s explored in the other games but it’s pretty thin here.

You’re dropped into the action as you take control of the blue dragon and its rider in an on the rails shooter. What that means is you fly into the screen but have very little control, you can move around for some minor dodging but your main objective is to move your reticule around and shoot the enemies that you encounter. You can do this by tapping the

button to shoot with the rider or holding down the button to lock onto multiple targets and fire the dragon’s laser upon release. 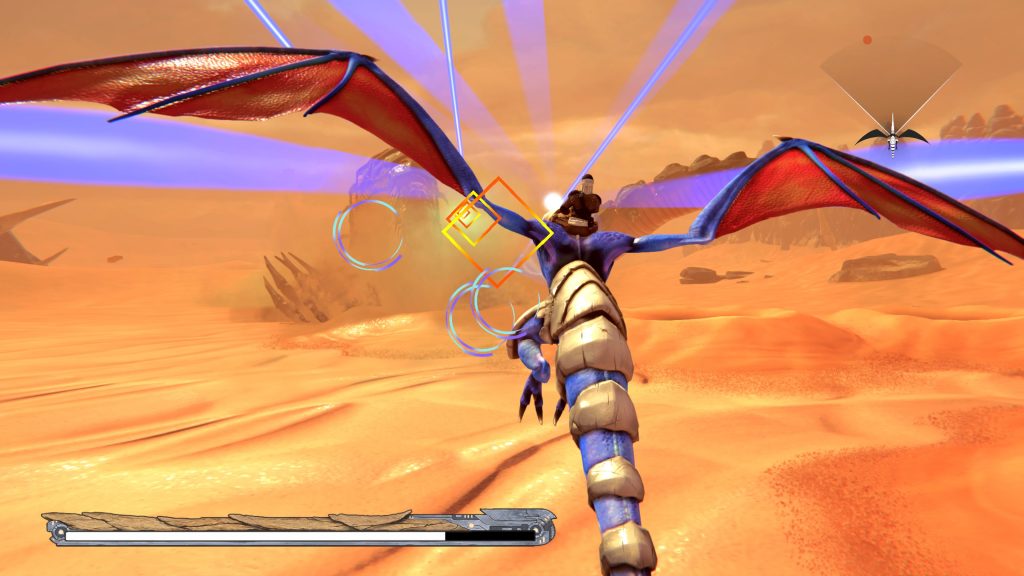 You’re not just facing forwards though, enemies can come up alongside you or behind you and you’ll need to keep an eye on your radar in the top right of the screen to see where the danger is approaching from. A tap of

will rotate your view in that direction to allow you to take them down and as you progress through the seven levels things become more complicated with later levels having you zooming through with enemies coming form all directions, some flying at you whilst others shooting.

As well as being able to move slightly you can also shoot most projectiles with your rider’s attacks, indeed this is their primary function as the laser is far more powerful and the lock on makes it easier to take down those quick moving targets. 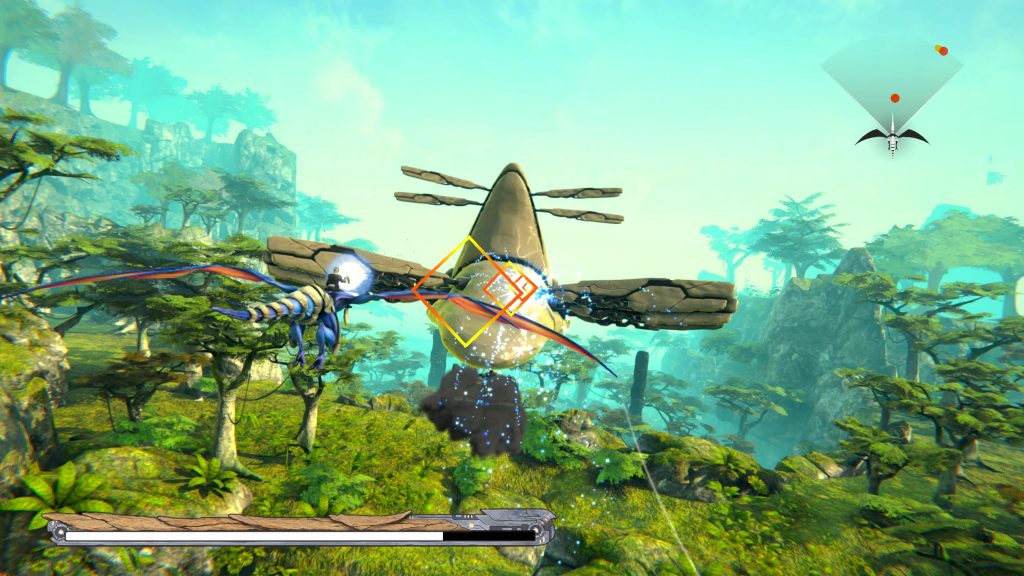 You’ll move through many different environments and although not AAA the original design shines through the graphics. The first level has you flying over a huge expanse of water as ruins crumble around you whilst later levels take you to deserts, forests and villages. Obviously all the graphics have been redone and move at a smooth frame rate but they’re closely based off of the Saturn original, there haven’t been many extra flourishes introduced. This is fine for being accurate to the original but it does mean, although attractive, the graphics do retain an old school quality. There are two soundtrack options, the original and a new one so it’s worth a couple of playthroughs just to listen to each of them.

Generally levels end in a boss which will be a larger enemy, potentially with specific weak spots and you’ll automatically fly around them (or they’ll fly around you). They have a very specific pattern and you just have to chip away at their health bar to win the fight. They can be quite cool set pieces but they’re quite easy too, the levels leading up to them can often be more challenging. 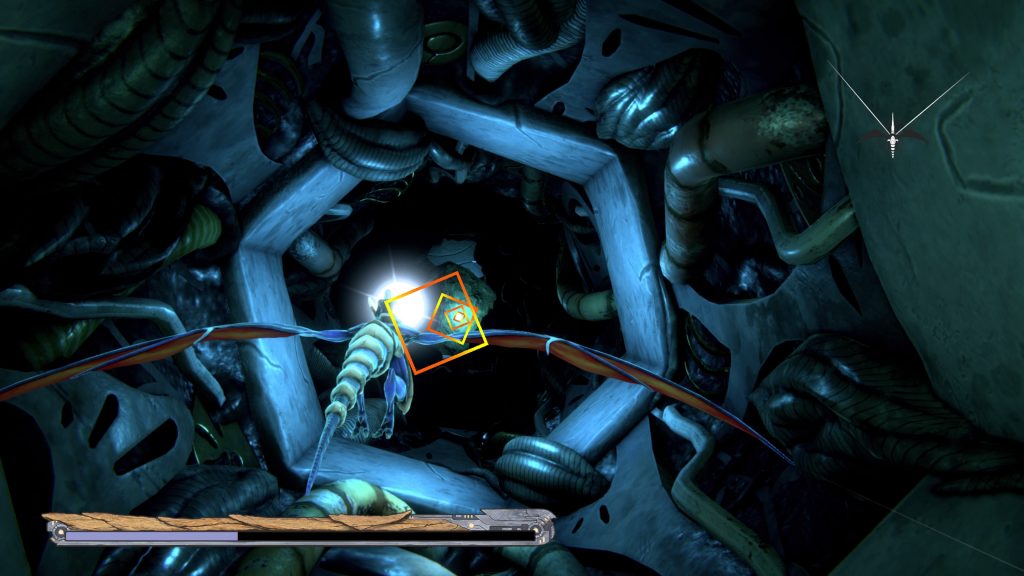 Once you beat a level you’ll get a results screen stating how many enemies you killed, missed and your accuracy. You can also exit here to continue from later. If you perform well you can get extra credits. In Panzer Dragoon if you die you have to restart the level over, costing you a credit and if you run out of credits then it’s game over. I only died once on my first time through so it’s not too harsh a penalty but some might find it a little strict for modern tastes. However the whole game only takes just over an hour to beat so it’s not like you’ll be losing hours of progress if you do game over.

Which is where the value prospect comes in. It costs £20 and yet it’s only an hour long game. There is some replay value with it being so short and when you complete the game it unlocks a cheat menu which lets you turn on invincibility or rapid fire and things like that. There are three difficulties to try, Easy, Medium and Hard but I’d got all but one trophy after a few hours of play. The final trophy is for playing the game for one hundred hours, which is a massive pisstake. People who have owned the original since the Saturn days probably haven’t put that much time into it, it’s not that type of game. Ten hours would have required plenty of extra playthroughs, ten times that is pretty ridiculous. 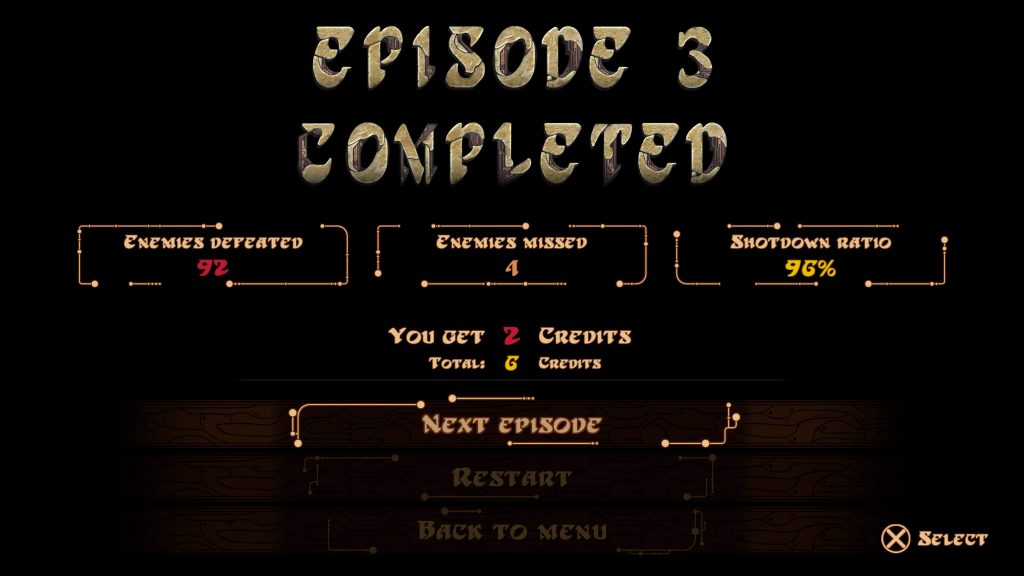 So ultimately whether Panzer Dragoon: Remake is worth it is up to you. It’s a fun game and video game history is important, especially from a forgotten era. This doesn’t contain the original game graphics to switch to to really see the difference but it does very much feel like that original game with new visuals layered on top. The price is a little steep for a very short experience but it is enjoyable whilst it lasts and as I said in the opening, I’d like to encourage more games from the Sega Saturn to return. Zwei and Saga at least, then move onto the Shining titles. Please!

Panzer Dragoon: Remake
7 Overall
Pros
+ Gameplay is still fun
+ Original designs shine through the updated graphics
+ Difficulties and unlocks encourage replays
Cons
- Very short at only an hour
- 100 hour trophy is a sick joke
- Pricey
Summary
Panzer Dragoon: Remake brings a Sega Saturn classic back to life. The visuals are decently updated but the price is a little high for an hour long game. Still, more of this please!