It’s only natural for Rogue-likes to be difficult. The whole point of them is the repetition, with you understanding and getting better at the game. Or in the case of Rogue-lites unlocking more and more abilities as you try and fail, eventually tipping the odds in your favour, when combined with also getting better at the game as well of course. An easy Rogue-like is nothing to write home about and I can announce that ScourgeBringer is a very tough game, in the Rogue-lite mold. 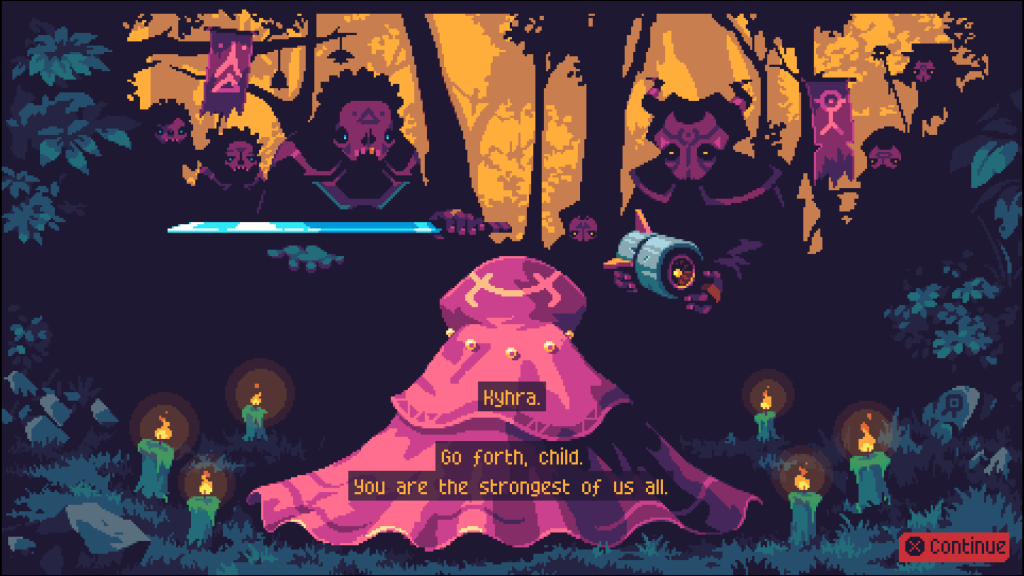 There is a minor set up for the story, with Kyhra being sent into the ScourgeBringer to discover why it is destroying the world. Although on some runs you’ll find some diary entries each run concentrates on the gameplay pretty much exclusively. Luckily the core gameplay is strong.

You start off with a controller full of moves and this doesn’t change too much. Movement-wise you can run, double jump, run up walls and dash through the 2D environments. The dash isn’t invincible which takes some getting used to as that’s quite common in other titles. Attack-wise you have a basic slash which you can spam very quickly, a gun which has limited ammo that resupplies as you fight and a smash attack that has multiple uses which aren’t fully explained. At it’s basic level it’s a big slash which knocks enemies away, but when enemies are about to attack they’ll get an exclamation mark over their head and if you smash them at this moment then they’ll become stunned. You can also use it to destroy bullets, since you can’t dash through them. 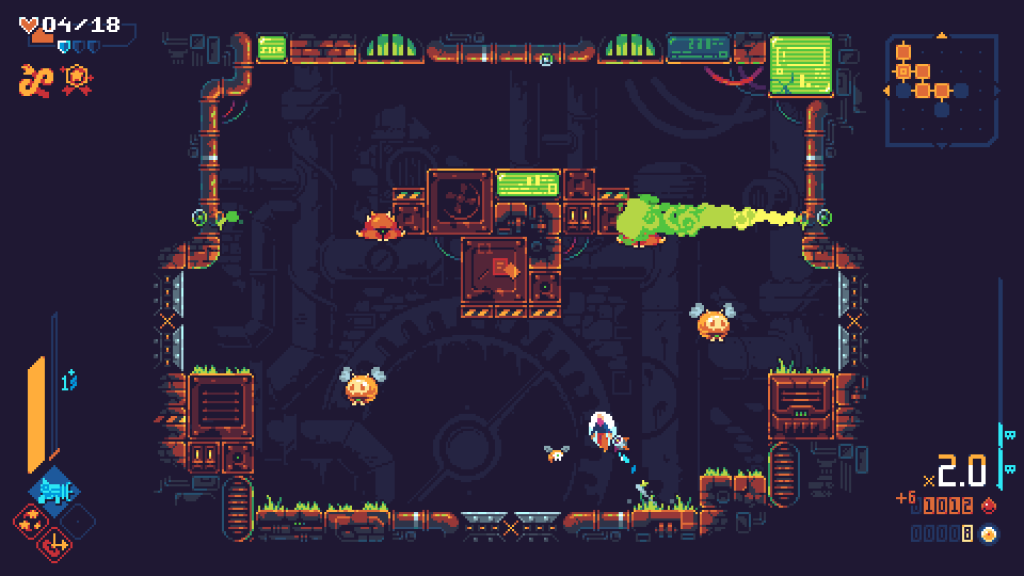 With these abilities you have a series of rooms to get through. Each room will be square with doors going up, down, left or right in various configurations. As with most Rogue-likes you’ll want to explore as much as you can to get stronger before you progress to the boss. You can find blessings which will grant you a choice from three passive abilities, as well as items that will give you stronger sword and gun attacks, increased health or recovery items. You can find these in shops, from survival rooms or from clearing out every room.

Apart from special rooms (the starting room, shops, survival rooms, etc.) each room will have a selection of enemies in it as you enter which will need to be dispatched before you move on. Generally this will come in two waves, with more spawning in once the first group is killed. Enemies come in various forms, with new ones appearing as you progress through the worlds. Some shoot, with different bullet patterns, some charge or spawn other enemies. Identifying which enemies are in the room and taking them out in a quick and safe order is one of the skills you must learn if you want to progress. You’ll also need to keep an eye out for hazards like spikes and gas, which disable once all the enemies are gone. You start with ten health and you only lose one pip per hit but there is very little invincibility after taking damage so when things go bad they can drain your health very quickly. 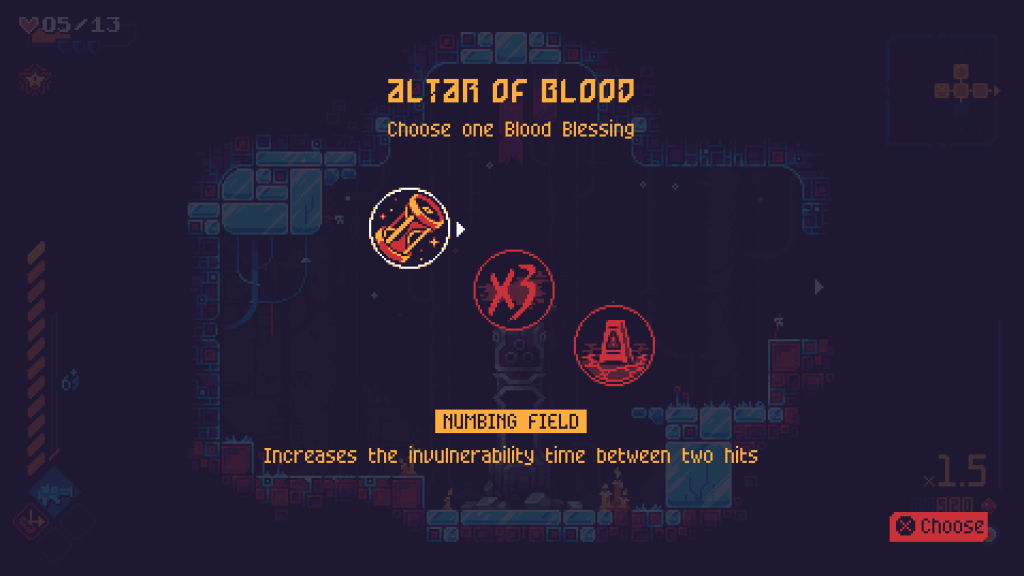 Before you can enter the boss room you must find sub-bosses in order to unlock it. These sub-bosses are fairly straightforward, the main differences to normal enemies are more health and the fact that they can attack without an exclamation point over their head. They’ll still have one move that you can stun them during but you need to be careful as it’s less obvious when they’re going to do other attacks. Bosses are the same but with far more complicated patterns, but these can be learned and actually tend to be easier to handle than the more crowded regular rooms once you do figure them out, at least early on.

As you defeat enemies you’ll gain blood which can be used in shops (although some shops want to trade in hit points) but also Judge Blood. You’ll get this from stronger enemies and can use them to unlock your permanent upgrades. Some of the early unlocks are really good, with your smash being able to deflect bullets back and unlocking a Fury move which is a special full screen attack that is tied to a meter. Some of the other unlocks seem less game changing but the Judge Blood is pretty generous so you’ll always be unlocking something. 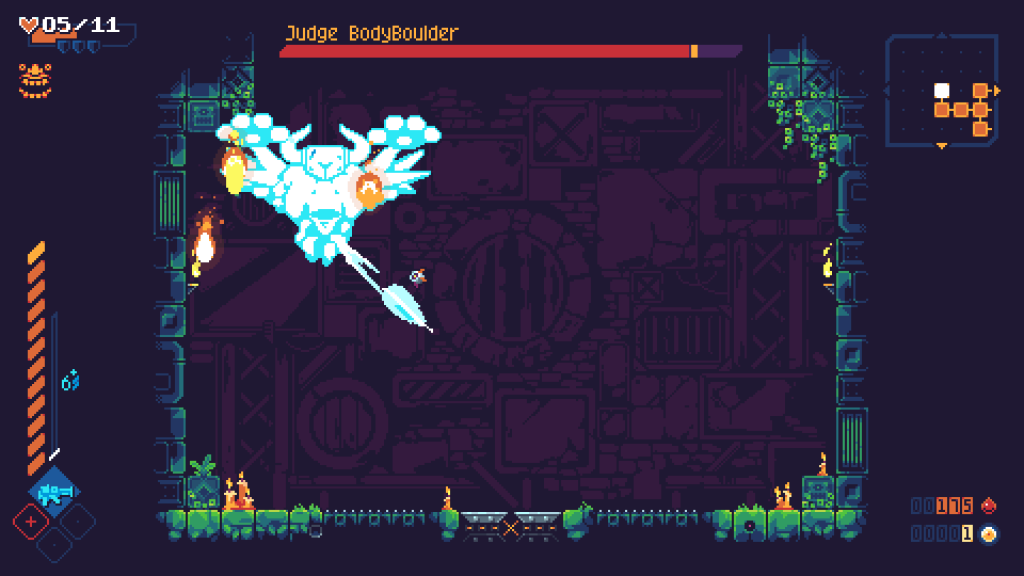 The visuals are 2D pixel art but it’s quite attractive and plenty colourful. Most importantly they’re clear so you’ll rarely lose track of what it going on, though things can get hectic at times. The music switches when you’re in and out of battle and it’s suitably pumping when things heat up.

As I mentioned ScourgeBringer is tough though, very tough. You’ll get through the first two or three stages eventually but things really heat up over the next couple of stages with bullet hell situations occurring in every room. If you want a challenge then this will bring it, but if you’re struggling then all is not lost. 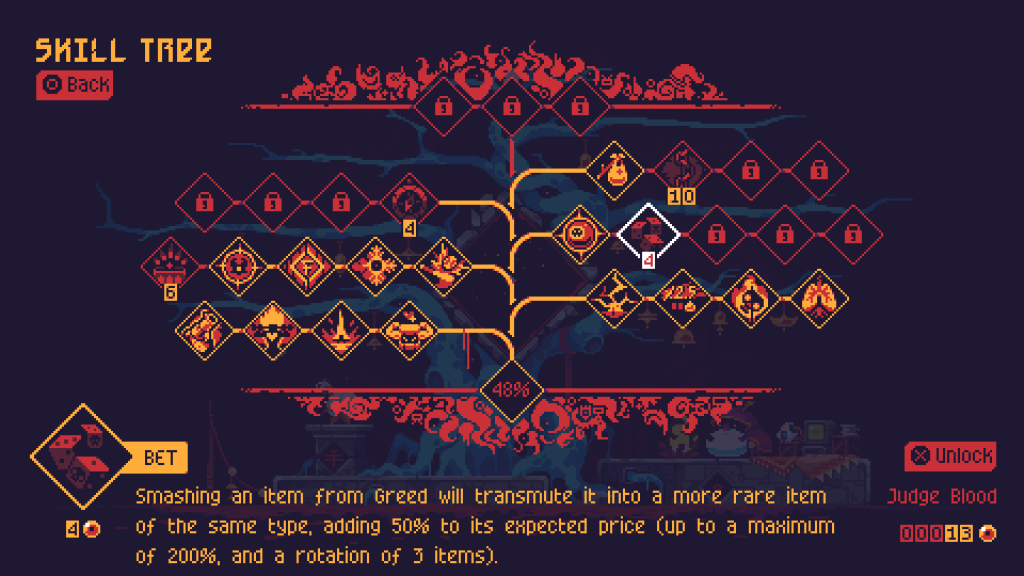 ScourgeBringer offers a host of accessibility options which allow literally anyone to finish it. You can adjust the game speed if things are a little too frenetic for you, adjust enemy bullet speed and if that’s not enough then you can even make the game spawn more health pick ups or, and this is the kicker, make yourself invincible. It’s not some false invincibility either, you can get hit to your heart’s content and you’ll never lose any life. At that point you’re not really playing the game any more but I’m sure there’ll be people out there who would just like to see the multiple endings without pulling their hair out.

The skill tree, the multiple endings and the challenge will keep you replaying but even within the realms of Rogue-likes it does become quite repetitious. The fact that every room has you fight two waves of enemies and that each world has a strict set means you will be seeing similar situations arise over and over, especially as you repeat the earlier stages. It does come with the territory but the fact that you’re reliant on your move set rather than picking up game changing weapons and skills means each run blends into the next whereas the best in the genre make you think outside the box by throwing unexpected variables at you. 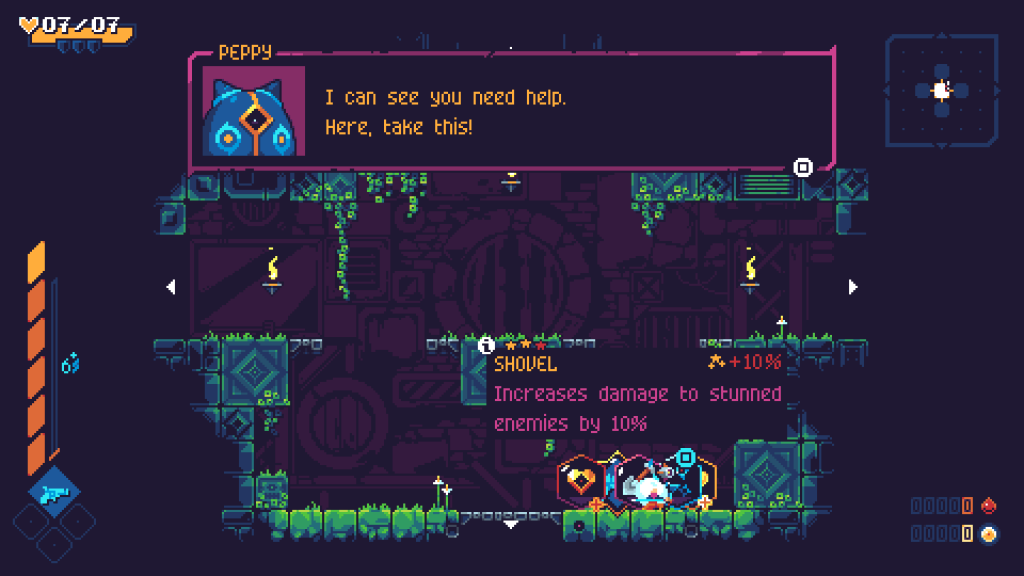 ScourgeBringer is a decent amount of fun though. The skill level required is high, unless you’re happy to use what effectively boil down to cheats, so those looking for a challenge will be well catered for. If it gains a following I would love to see some high level play as I’m sure it’ll be mesmerising but it will be beyond most humans.

ScourgeBringer
7 Overall
Pros
+ Strong movement and combat
+ Accessibility options allow anyone to play
+ Unlocks come at a steady pace
Cons
- Punishingly hard later on
- Gets repetitive
- Runs feel very similar
Summary
ScourgeBringer is a tough Rogue-lite with enjoyable movement and combat mechanics. The difficulty does ramp up massively just over half way through but don't let that scare you off as there are powerful accessibility options for those of us who aren't superhuman.