Terror of Hemasaurus is a game from Finnish one-man studio Loren Lemcke and can be described as a 2D destroy ’em up in the same vein as Midways ’80s coin-op Rampage in so far as that you play as a big monster that tears through cities smashing buildings, flinging cars and eating people.

Now we always liked the idea of Rampage more than we liked the actual game.  Sure, it was cool playing as giant monster but the game got boring quite quickly and it was hard to zero in on what was damaging you, meaning that ultimately you felt like your energy was being slowly drained away without you being able to do much about it.  After a few levels, you felt like you had seen enough. 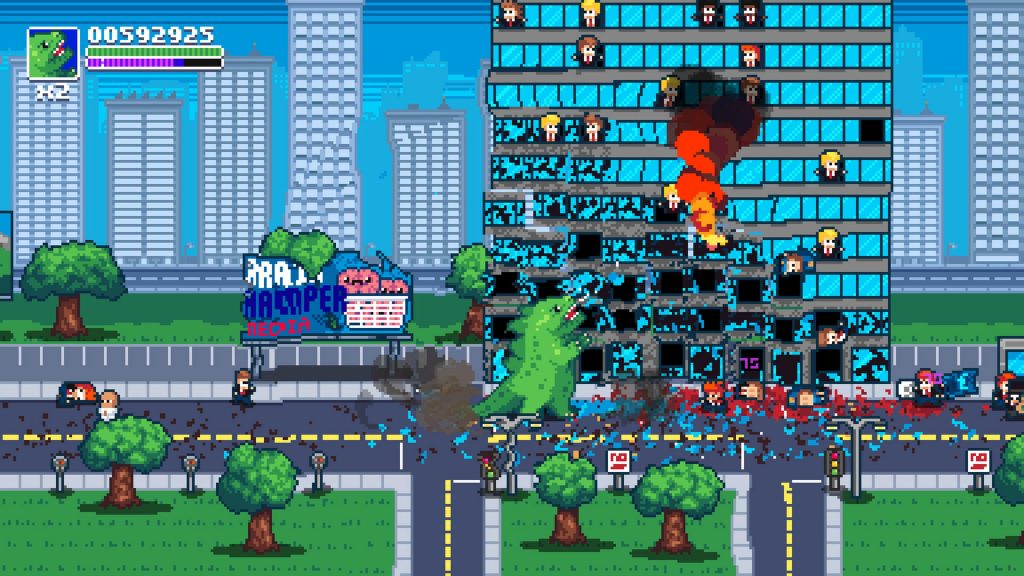 Terror of Hemasaurus takes that core gameplay but ramps it up and gives it more structure and, dare we say it, a point.  From the start you are offered two modes.  There’s an endless mode that just gives you as many stages as you can handle until your lives run out but the main draw is the game’s story mode.

In the standard Godzilla trope, you play as the Hemasaurus, a giant lizard thing that emerges thanks to man mistreating the planet (this time though you are thawed out of the ice thanks to global warming).  A cult discovers you and realises that in order to save the planet they need you to destroy the cities and the people in them.  So you’re very much an anti-hero.  Cutscenes with text-based plot explain the twists and turns of the story but with no voice acting you might find yourself tuning out of it but the story is fairly entertaining if you stick with it. 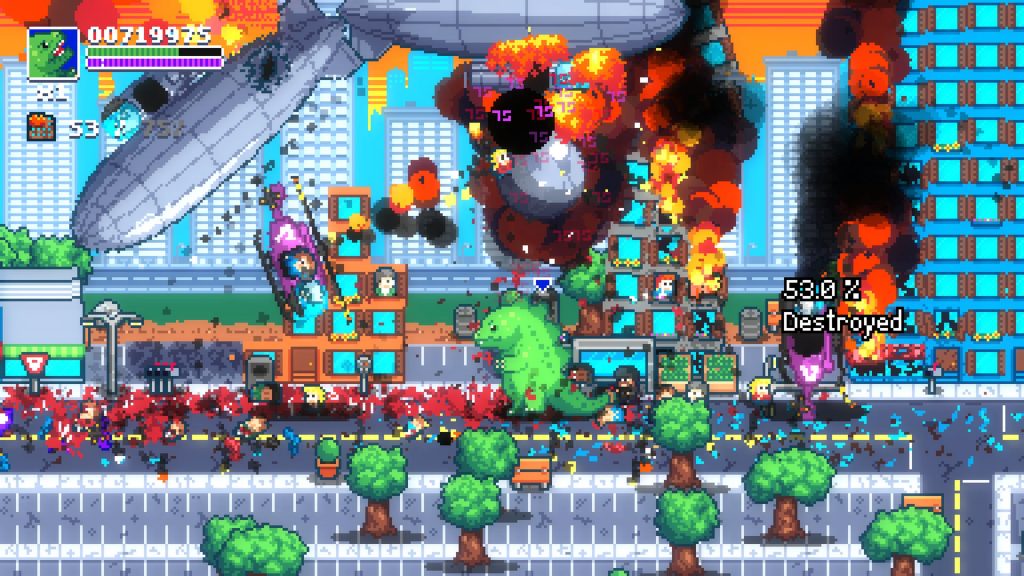 As you smash through the three chapters, the human response to your rampage increases.  Where there were once news reporters in helicopters, those become police choppers and later SWAT ones.  Civilian cars give way to rocket launching soldiers and so on, ramping up the danger to you.  Thankfully, you’ve got plenty of ways to cause destruction.

Hemasaurus can punch buildings until they collapse (very much in the Rampage style but with more attention paid to physics) or can climb them to do giant butt-slams to take out the foundations.  They can also kick vehicles, throw humans, climb onto helicopters and even unleash a special move.  It’s also worth noting that there are four playable monsters, each with different specials.   It’s particularly special when you bring down a helicopter by throwing humans into their rotor blades.

As you rampage through the levels causing mayhem, it’s really impressive to see buildings collapse onto each other as explosions fill up the screen.  This is very much a dynamic game which is why we fell in love with the idea of it back when the dev was just tweeting out .gifs of the action.  It really is quite spectacular at times. 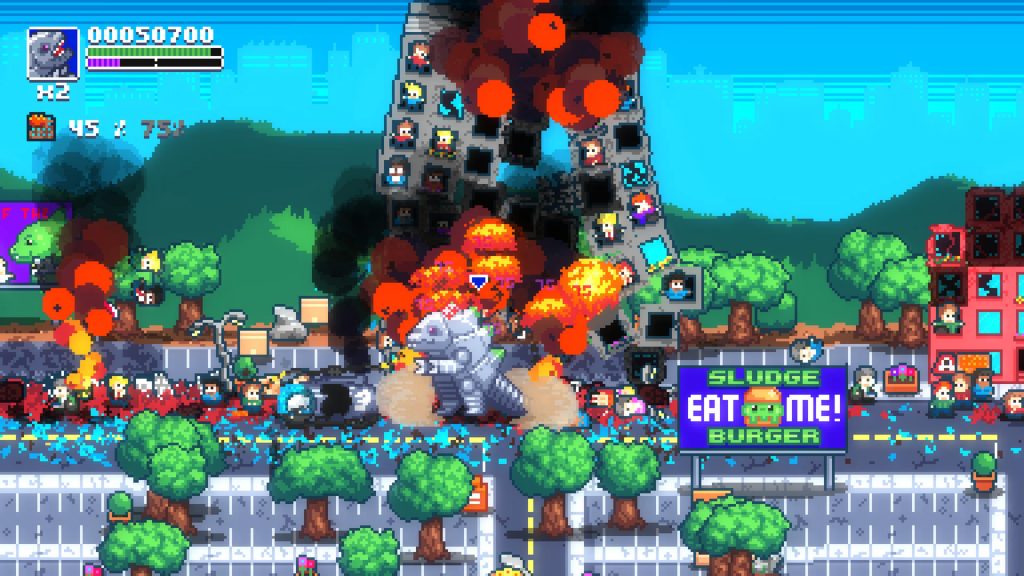 The only real knock on the game is the difficulty, or lack of.  You’ll probably find yourself clearing the first (of three) main chapters without ever really being in danger.  Even when you are losing health, you can easily replenish it by eating humans.  Eventually things do ramp up though but it does take a while.

Towards the end of the third chapter you’ll be getting lit up by all manner of specialised troops and helicopters and you’ll definitely die a few times.  This definitely makes the game more interesting but it does mean you have to spend a lot more time eating people. 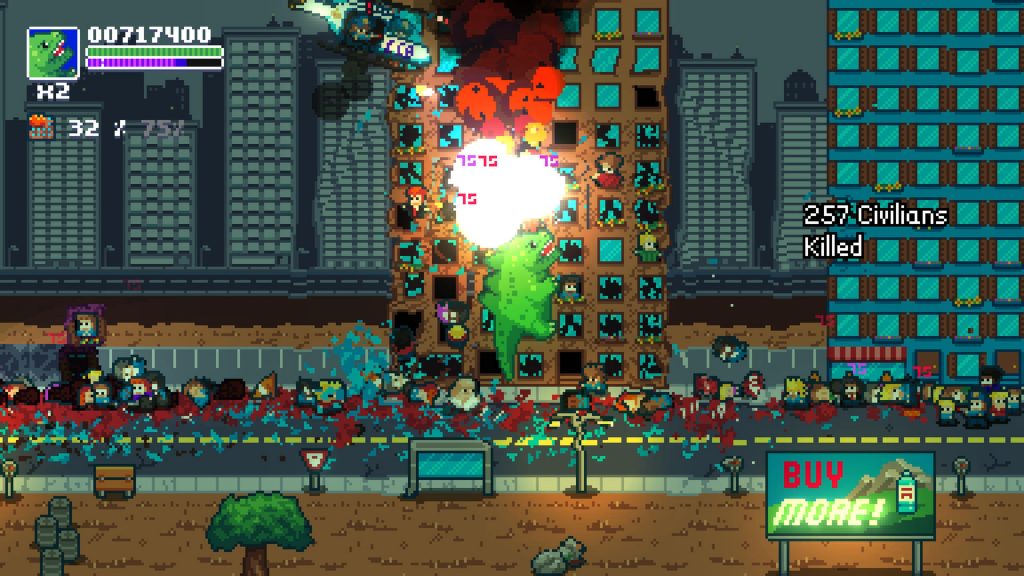 However, once you’ve completed the story mode you’ll be best off sticking with the endless mode as the level of challenge is a bit better balanced, although at that point you’ll likely only be playing for either short arcade-style blasts or for the trophies (which are well set-up to keep you playing).

Niggles over difficulty aside, the game itself is a ton of fun to play.  The controls are just right for this type of game, you’ve got just enough attacks in your arsenal to keep things interesting without it getting too complicated and there’s just such a tremendous sense of spectacle and fun when you’re throwing a car at a helicopter or making a tower block fall onto a smaller building.  It’s absolute chaos but it all holds together and makes for a very playable game. 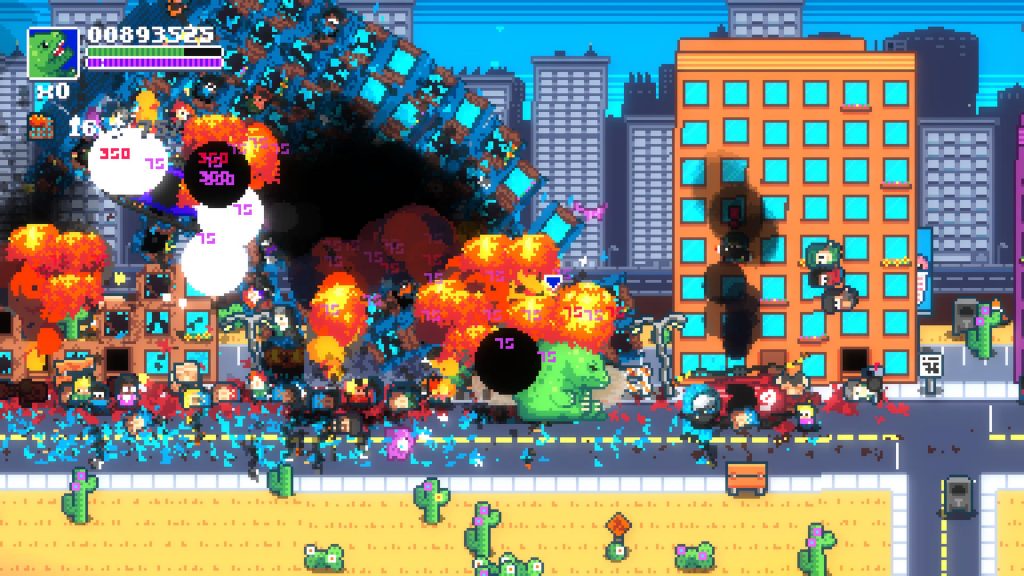 The visuals don’t disappoint either.  Much like Rampage, the buildings are modular so you’ll be whacking chunks out of them but the way they fall is a lot more exciting and there’s a lovely neo-retro look to the game.  Sure it’s all done in a 16-bit/arcade style but you’d never have been able to do this back in that era.  We don’t mind throw-back visuals but we do prefer it when they are used to create something like this that would have made your SNES die back in the day.  The soundtrack isn’t quite as good though.  The music is suitably arcadey and beefy but it sounds a little distorted and too loud.

Despite completing the story mode a couple of days ago, we’re still playing Terror of Hemasaurus for fun which is rarer than you’d think.  The game stands tall like the monsters it lets you play as.  Throw in the local-only four player mode and you’ve got a fun package here that’s sure to keep you and your friends entertained and it’s so rare to see a modern indie game outshine its inspiration but this game does it.  All hail the Hemasaurus!

Terror of Hemasaurus
8 Overall
Pros
+ Absolute carnage!
+ Good controls for all your attacks
+ Improves on the structure of the Rampage coin-op
+ Great visuals
+ Endless mode provides a reason to keep playing
Cons
- Difficulty curve is a little light
- Soundtrack isn't much fun to listen to
Summary
Terror of Hemasaurus is one of those rare indie games that takes an arcade classic as inspiration but improves on it in every imaginable way. The most important being that it's just a ton of fun.