I’ve often wondered how to view games that don’t carry a lot of challenge. I can feel like a passenger throughout but some of my most memorable experiences have also felt very trivial to complete. It’s a quandary I’ve had to keep in mind whilst playing Wavetale, an adventure platformer from Thunderful. 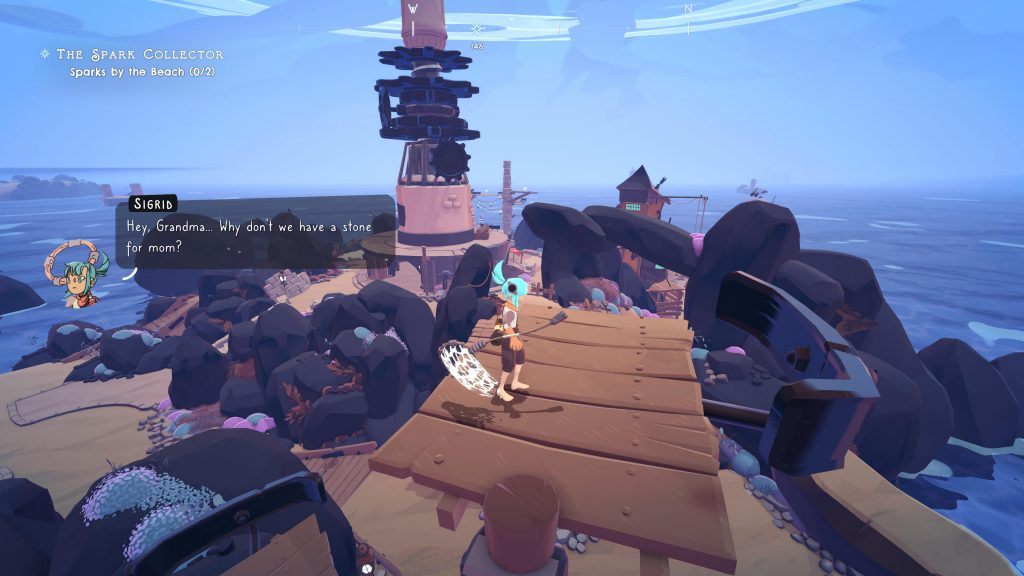 Wavetale‘s plot doesn’t lift up any new ground but it is a well told, smartly performed effort. You play as Ingrid, a young girl who lives in a world dominated by water. All the land seems to have been reclaimed at the hands of a catastrophe caused by The Paws. The result being a world covered with black smog, dubbed The Gloom.

Sigrid’s journey sees her tasked with setting the world to rights but she’s not alone. During the calamity, she’s assisted by a mysterious shadow. This grants her the ability to walk on water and this freedom of movement is one of Wavetale‘s stronger components. The plot itself manages to remain compelling with Sigrid’s personal story helped by a fairly consistent, small cast of characters. They’re all voiced exceptionally well and manage to sell the situation in a believable way. 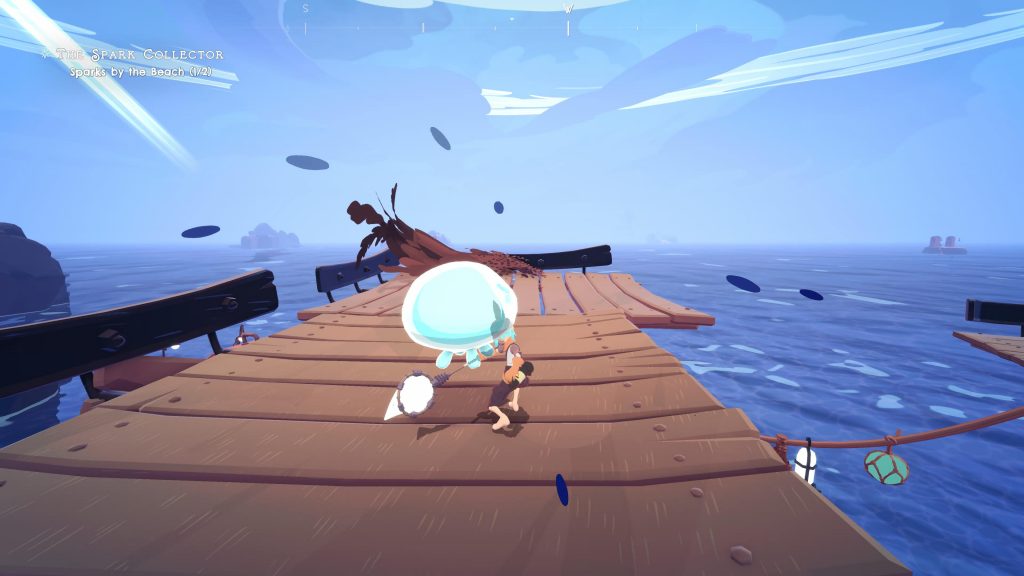 It’s largely handled in cutscenes but the large nature of the world does allow Sigrid and other characters to deliver more story during the stretches of downtime. There’s plenty of character to it and I enjoy listening to the conversations of the townsfolk as they all come to terms with the events of the game. There is an environmental vent to the story but it doesn’t truly become apparent until the closing act. Things stay largely focused on Sigrid and her crew and it helps keep the tone consistent throughout.

Gameplay is settled in two camps. Across the wide, watery expanse, Sigrid can surf, jump and dash her way to each island. There’s a tremendous flow to it with slides and grapple points on hand to speed things up further. Despite the size, the world design takes this momentum into consideration and it does shine. Whilst in the air, she can hover, reorient and it does allow for you to look for the next point on the chain. What this movement also does is allow for alternate paths to objectives.

Objectives that are marked clearly enough on your compass. Wavetale is largely concerned with fetch quests. The side missions cater heavily in this and, whilst there isn’t much variety, the movement does at least give you a sense of choice. Platforming is kept simple with no jump requiring outright precision. You can skip sections entirely, if you have the speed to do so. 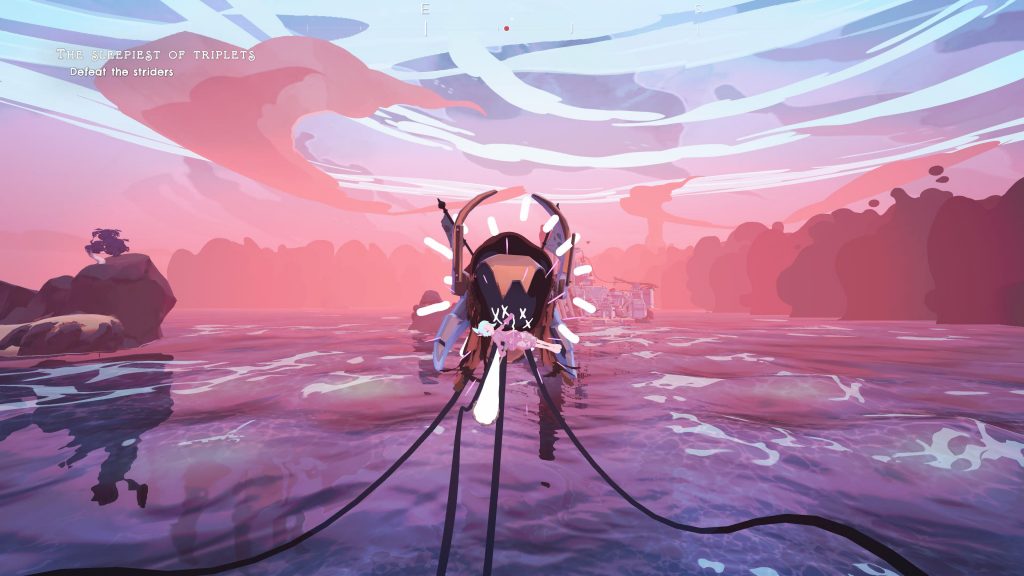 I found it easy to parse where your next platform was and, whilst it all felt fairly forgiving, it never felt mindless. The same can’t quite be said of combat. Sigrid has a light and heavy attack with most foes going down in two or three strikes. There is a generous health bar that regenerates as you kill enemies. On land, the traversal options don’t come into play and combat lacks a sense of threat. Most players will comfortably get through this game without any deaths.

Out on the water, combat works better as your grappling hook can be used to string kills together. As on land, the enemies aren’t challenging or resilient but bringing that momentum into the fighting does help scraps feel more dynamic. It’s a shame it never really develops into something more interesting. It can look impressive but, as it stands, it can be a trivial way to deal with enemies. Rewards can also feel a little bland. You gain sparklings throughout your time in Wavetale and these can be spent on clothing for Sigrid. Some of these look fun but they’re cosmetic window dressing that might not appeal to some. It did make me dismiss more than a few side-quests as they were handing out currency that I was already flush with.

Visually, I think Wavetale‘s style is one to admire. There’s a sharp, blue-sky approach to most of the aesthetic and it’s pleasant to look at. Characters are expressive, owing to some touching 2D facial animations that emote very well. Attempts are made to make each part of the world feel different but it all seems baked in a sunny tropical look that can make things run together. I do find The Gloom to be intimidating. Eliminating it opens up more of the map but this oppressive fog also does a good job of boxing you in. As freeing as the movement can be, the adventure feels linear. 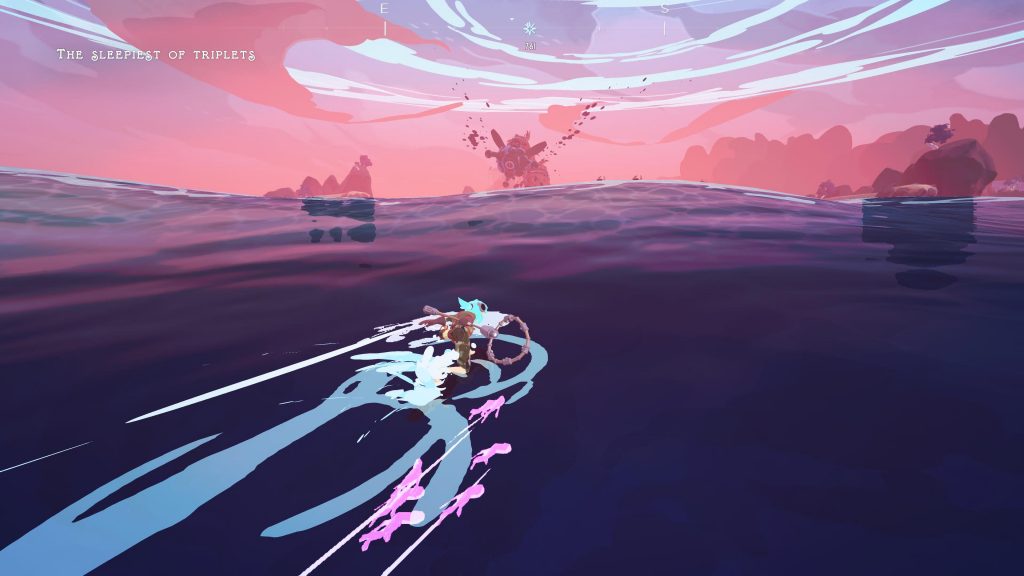 On a technical level, the game couldn’t quite keep up. Some indoor sections appear to suffer from poor frame pacing and it can be worrying to see a world judder in certain spots. I also find the draw distance causes problems as objects pop into existence. I also find transitions into cutscenes to be jarring. It never broke on me but there’s an obvious lack of polish present, despite Wavetale’s best efforts to present an eye-catching world. At least the music holds up. This boasts a dynamic score that fits in well with the swells and falls of the action. It can be great to hear when surfing the oceans.

These problems aside, Wavetale presents a memorable story within a beautiful world. Whilst it lacks challenge and some nuance to its combat, I feel positive about the whole package. It’s casual and movement offers some great momentum and I would urge those curious to give this game a glance. It’s a shame it wasn’t polished up some more before release but what’s here is still admirable.

Wavetale
7 Overall
Pros
+ Impressive visuals.
+ A strong story that's well presented.
+ Movement has a real flow to it.
+ Solid soundtrack.
Cons
- Rough around the edges.
- Side quests don't feel very rewarding.
- Combat on land can feel completely without threat.
- Platforming can also feel leisurely and trivial.
Summary
Wavetale certainly could've used some extra polish but the movement and storytelling shine strongly in a world that is mostly gorgeous to look at. Combat lacks any threat and the platforming can feel incredibly simple. There's not a lot of risks being taken which can result in a game that feels trivial. Despite this, there's more than enough to keep those curious onboard. I do find the personal tale to be engaging and it's nice to see an apocalypse look so bright and optimistic.

One thought on “Wavetale – PS5 Review”