I think few games have left a mark on open-world design than The Legend of Zelda: Breath of the Wild. Elden Ring has taken the lessons to heart but, prior to that, Sable took a shot at keeping the world fairly quiet and letting players do the map marking. Originally an Xbox exclusive, Shedworks’ relaxing adventure has now found it’s way to the Playstation 5. For better and worse, this port retains some of the technical foibles but does add little tweaks like haptic feedback support. 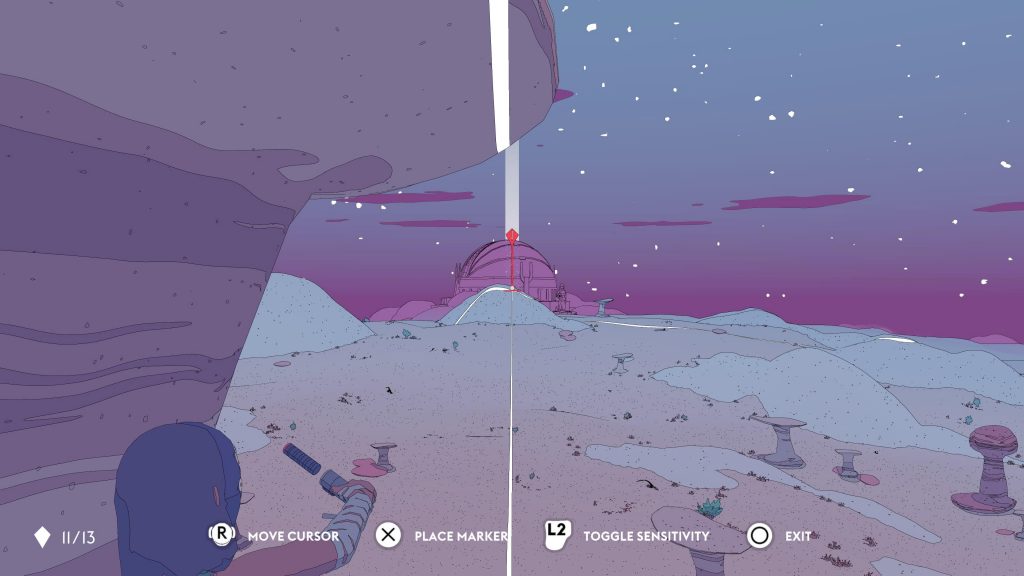 The story of Sable is of the title character coming of age. She’s Ibexii, a mask-wearing race where their face-wear best represents their place in society. Sable is undertaking The Gliding, a rite of passage that, once concluded, should result in her knowing her role. During her adventure, she’ll ample chance to discover new things about herself and the world around her. Conversations with others do add flesh to the fairly basic premise and it’s well told, despite being delivered entirely in text. The writing really pulls its weight and delivers something light in tone and dialogue options do help players express themselves slightly.

After a short introduction, you’re let loose into a wide expanse and Sable‘s visual style is one to admire. It feels very different with a cell-shaded approach married with some sharp lines. Day and night offer variations on the colour palette which can alternate between vibrant and muted tones. The surroundings can really pop, although it’s a little jarring to see her run animation set against the rest of the world. She appears to be lacking frames of animation which, whilst it does lead to looking more cinematic, triggers a worry that the game is not performing at its best. 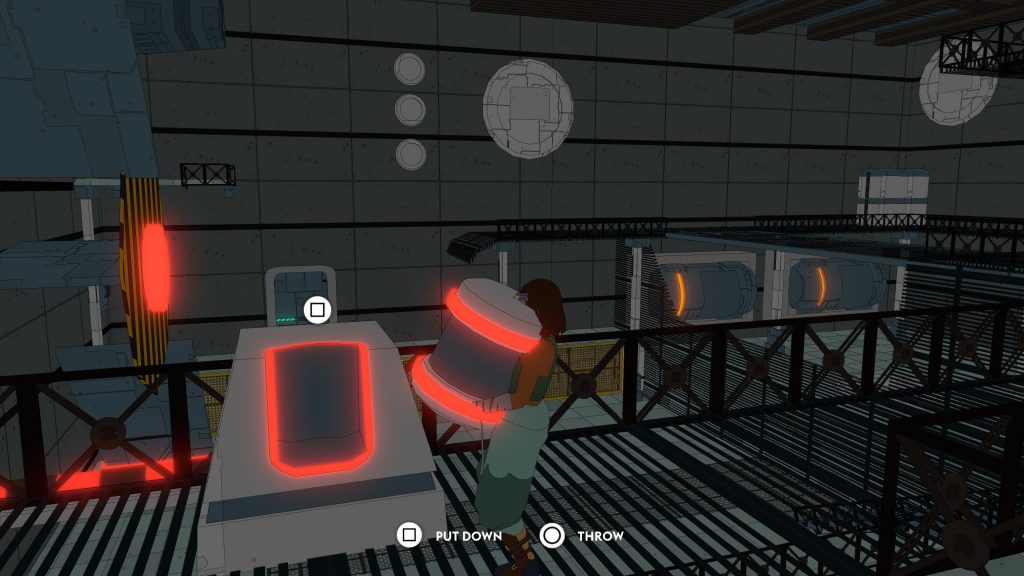 Not to say there aren’t technical issues but I do feel this choice has me second guessing when the game is actually chugging. Frame rate is noticeably erratic and I can’t pinpoint a contributing factor. Sometimes an autosave holds things up, sometimes it’s a built-up environment. Sometimes it’s smooth. I couldn’t escape this during my time with Sable and it even resulted in three instances of the game completely locking up.

For some games, that would be a death sentence. I’ve been fortunate not to lose any progress and the gameplay doesn’t really require a steady performance. There are some really nice touches like sand being blown off desert dunes, volcanic steam erupting from the surface. Whilst it does largely cover a sandy planet, each area does have a distinct geography. One deals heavily in canyons and everything is littered with remnants of a technologically advanced past. The Ibexii aren’t a primitive race but I got the sense they were starting over.

When browsing the horizon, you have the opportunity to place markers on places of interest and it works rather well for coaxing you out into an admittedly empty landscape. There’s plenty to explore but the lack of any danger means you are left alone for long stretches. Collectibles will catch your eye but I did find myself plotting a course from landmark to landmark. To help cover distance, you’re given a bike as part of The Gliding. This hovering vehicle is great at traversing the desert and you can upgrade its performance and look, should you feel like it. If you lose track of it, a whistle can beckon it towards you. 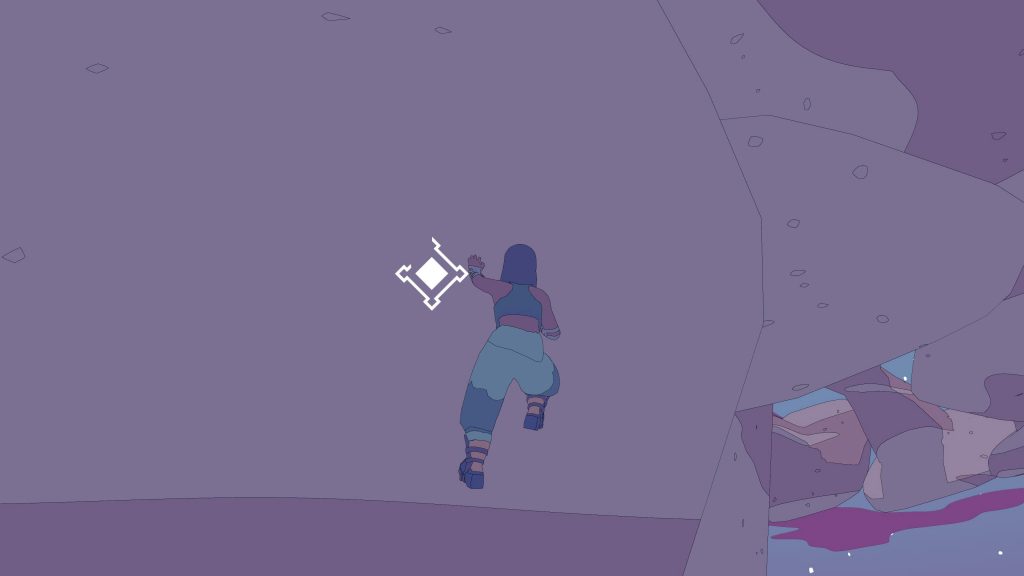 How you interact with the world is largely through platforming and climbing. So many areas have an element of verticality to them. If you plan to fill the map out, there’s towers you can climb to label potential areas for investigation. Traders also sell you complete maps at the summit. These are easy to spot and often lead to new quests. None of these seem especially taxing but Sable seems to trade in a very casual approach.

Platforming is kept very simple with a hover move being accessible very early on. Sable will reach for ledges and I find she can climb most surfaces. Stamina can be a limiting factor but some platforming sections present alternative paths. Upgrading this stat requires a diversion into collecting Chum Eggs which appear plentiful. At stock level, I reached by limit fairly often but a couple of upgrades gives you more than enough to handle the toughest climbs.

There are also puzzles to solve. These are also easy to grasp and usually involve moving power cells around to activate doors or switches. I wouldn’t have minded more of these as they’re the closest the game comes to a challenge. As it is, they tend to reside within a specific set of quests. In the great outdoors, the focus is on climbing and traversal. I also feel the game suffers from repetitiveness. Quest design is kept largely occupied with fetching and there can be quite a distance between tasks. At least fast travel is unlocked very early. 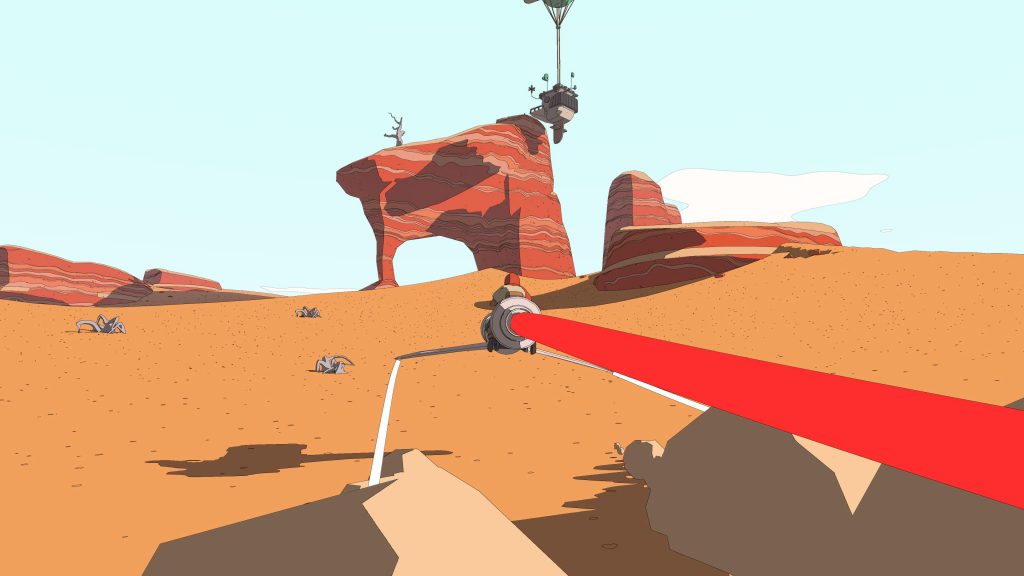 Whilst Sable doesn’t deliver much in the way of difficulty, it does satisfy my curiosity. Exploring has its benefits from finding extra cash and collectibles. It’s genuinely interesting to look at and it can be fun deciphering the best way to approach an obstacle. All of this is accompanied by a soundtrack that maintains a mellow vibe. It’s hard to be mad at this game, even when it stumbles on a technical level.

And that is something to be aware of. Whilst the visuals offer a unique look, it never feels like its running optimally. Sable‘s gameplay is pressure free and, whilst there is a lot of traversal over a barren landscape, it doesn’t always feel like a chore. Quest design could be more varied. I feel you’re tasked with a lot of fetch quests and they can get stale quick. The rare times it branches away from simple errands, do feel special. As it is, Sable is a gorgeous game that can feel repetitive and, at times, a little empty.

Sable
6 Overall
Pros
+ Has a really striking aesthetic.
+ Relaxing soundtrack.
+ Climbing feels satisfying and tactile.
+ Map marking makes discovery feel earned.
Cons
- Despite the gorgeous world, it largely feels empty.
- Very little in the way of challenge.
- Quest design lacks some variety.
- Has some ever-present technical issues.
Summary
Sable is a game that settles on a relaxing tone with an interesting aesthetic. Unfortunately, it's inhibited by some technical issues and some plain quest design. Traversing the barren world can still be enjoyed. Despite its emptiness, there's a decent sense of discovery that's accompanied by a very mellow soundtrack. As it is, there's a good game here stifled by unpredictable performance and a lack of variety.

One thought on “Sable – PS5 Review”