Every now and then you come across a game where mechanically, there’s something on offer that feels different and fresh. Spooky Chase by QUByte Interactive and Burning Goat Studio, is one of those instances. From a combination of small Brazilian studios, this platformer looks to a neat idea and hangs its hat firmly upon it. Thankfully, it seems to work. 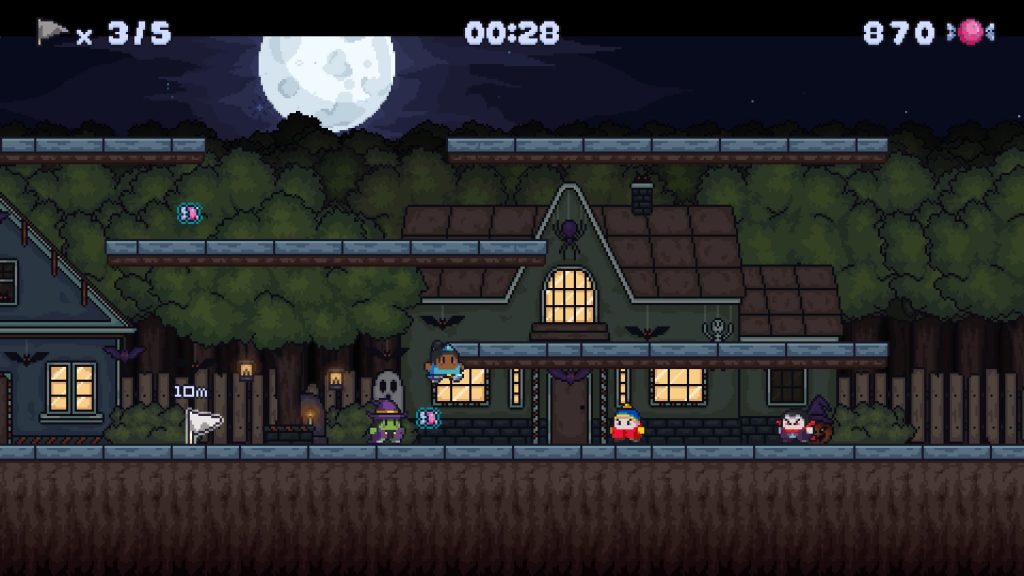 Spooky Chase hinges upon a very novel concept. Each stage has ten flags to collect. You have 30 seconds to collect each of them and the clock resets on every success. On top of this, each victory spawns a ghost of your past ventures. As you collect more, each stage becomes filled with your old selves and the challenge comes from avoiding and navigating past your ghosts.

Flags are randomly spawned so memorising pathways isn’t always going to bear fruit. The game becomes more about recalling where your old haunts are and trying to tackle or avoid potential trouble. Jumping on ghosts does allow you a temporary reprieve but you’re mostly battling a clockwork deathtrap of your own making.

Controls are kept pretty simple. You are always moving but can switch directions using the d-pad. You also have a jump which can be used to reach high platforms or avoid bother. There’s a slight delay that comes from changing direction but the controls largely behave and respond in a manner that’s consistent. It is not as twitchy and reactionary as I’d like but it does lead to some required forward planning.

Traversal can be supplemented by special items that are unlocked through bonus stages. These stages unlock by collecting yellow balloons that only arrive on the final flag grab of each level. The clown shoes are handed to you pretty early and this allows for swifter movement which can come in handy. The other bonuses all seem handy with the cloth parachute allowing for some much appreciated air control. 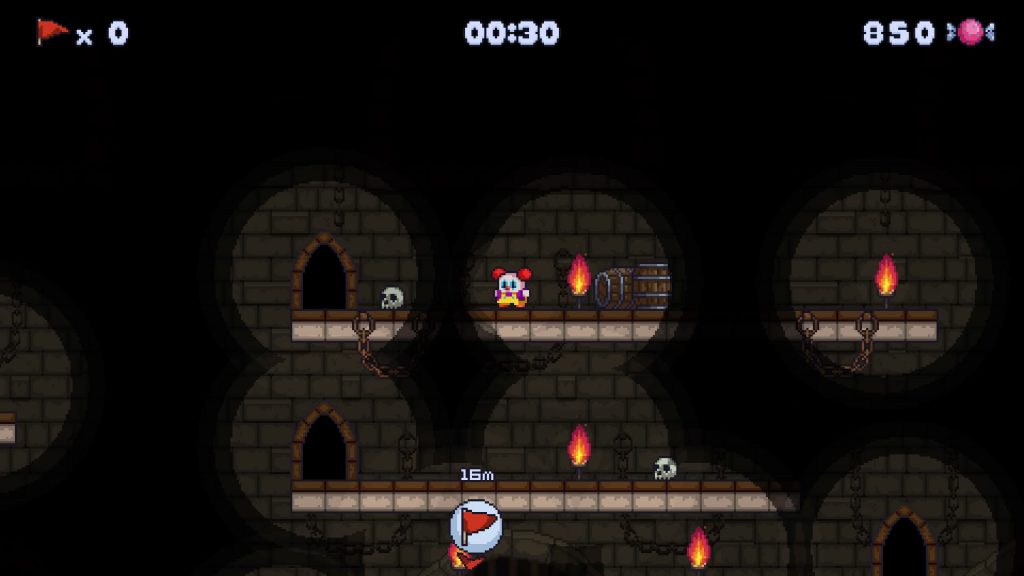 The levels are usually small in size which puts emphasis on direct competition with your ghosts. The time limits are generous and the flag is always indicated on screen before you set off. Time doesn’t start until your character starts moving so it allows for some thinking time. Locations vary, even within their set biomes and keep things fairly fresh. Fog can obscure platforms, switches might need to be activated to climb higher and mud can slow you down, for example.

It’s a variation that’s needed as, whilst the levels can be quickly accomplished, it’s not without repetition. Trial and error is very much at the forefront of my mind when playing Spooky Chase. I feel it’s a game best served in short doses but a successful run of a level takes mere minutes, if your luck is in. Your flag count is what gates progress and I do tend to chip away in ten minute chunks. The bonus items aren’t necessary but they do feel welcome. There’s a shield you can unlock which gives you amnesty from one hit. Vital in a game where one strike takes you out. 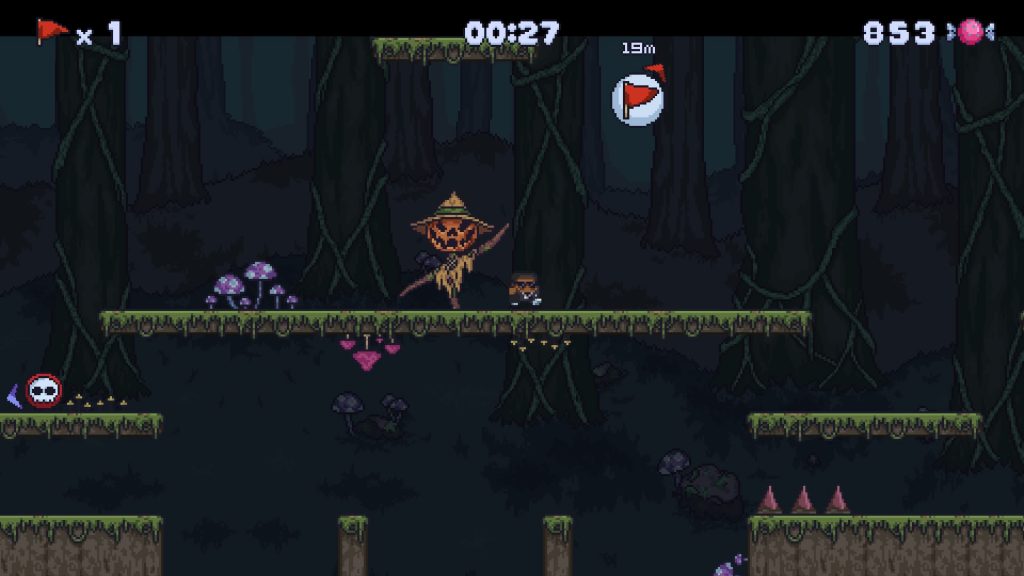 I get frustrated but not enough to entirely sit Spooky Chase down. The game’s cheap price point and the very quick loop of it all makes for something to hammer against when you have time to spare. I wouldn’t call it truly addictive but neither is the game especially off-putting. The concept is put to good use and does provide something truly interesting.

Presentation is relatively spare but the pixel art is nicely detailed and animates well. There’s dozens of cosmetic costumes to change your look and seeing the past layer itself can deliver a chaotic time. The graveyard levels come with a torrential downpour and the sporadic lights of the castle can really make you unsure of your footing.

I’m having a bizarre issue with sound. There is a decently catchy soundtrack on offer but it appears I can only hear it if I plug headphones in. Through my TV speakers, it’s entirely absent with only the sound effects for company. By default, the volume is halved but maxing those settings out didn’t seem to offer any help. It’s a shame because it is a good soundtrack that’s worth hearing. It compliments the action well and the fast nature of the game means the music doesn’t wear thin. 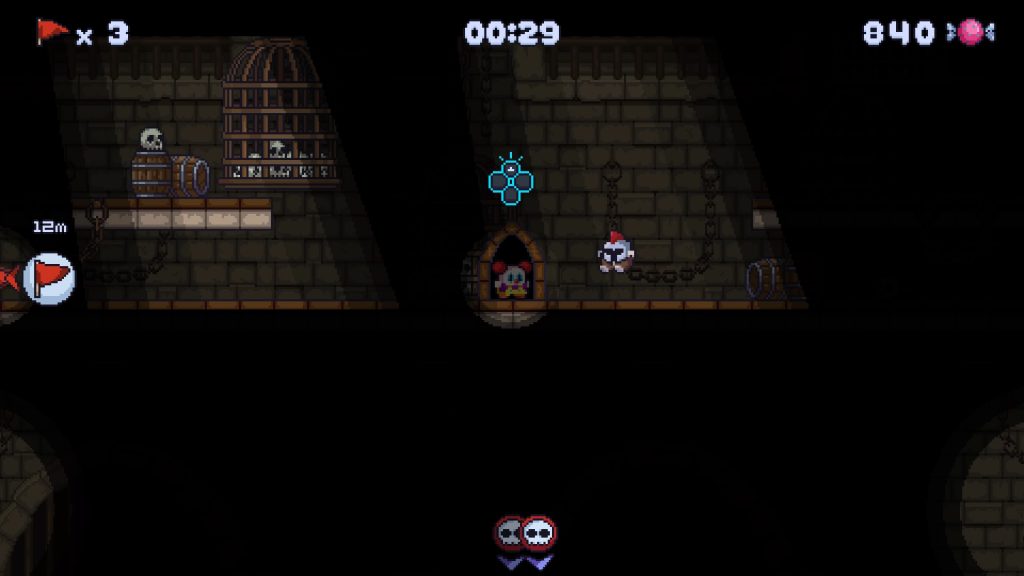 I found Spooky Chase to be an enjoyable effort. The novel idea of avoiding your past runs makes for an engaging, dynamic platformer. It can frustrate but the whole game moves at a pace that doesn’t linger. I would’ve liked the controls to be a little more immediate but the consistency does lead you to plan ahead, in some instances.

Spooky Chase
7 Overall
Pros
+ A really neat concept that's executed well.
+ Responsive, consistent controls.
+ Plays well in short bursts.
+ An excellent soundtrack.
Cons
- Leans heavily into trial and error which can frustrate.
- Some odd audio issues can lead to a mostly silent experience.
- Very little story to speak of.
- Bonus items can quickly feel essential to get.
Summary
Spooky Chase manages to execute on a fairly clever premise. The unpredictable nature of the game helps deliver something easy to grasp but potentially tricky to accomplish. The bonus items give you reason to persevere and return. There's not much on the periphery but it is mechanically intriguing and worth a look.