Blizzard (now Activision Blizzard) these days are best known for their time-stealing MMO World of Warcraft and the Diablo games but back in the 16-bit era their output was a little different.  The Blizzard Arcade Collection is a compilation of three of their earliest games which players may remember from their SNES or Megadrive iterations.  However, unlike most retro compilations, this is more than just a simple set of three ROMs and instead the games are given some real consideration both in terms of how they play but also their history.

The games in question are The Lost Vikings (1992), Rock n’ Roll Racing (1993) and Blackthorne (1994) AKA Blackhawk and each is offered up with a ‘Definitive’ edition with some modern day conveniences as well as the original SNES and Megadrive versions (Blackthorne gets an unexpected 32X version).  This may seem like unnecessary extra curation but these different versions all have something to add, so let’s deep dive into this one game at a time.

While The Lost Vikings is the oldest title on this compilation, we need to start with Rock n’ Roll Racing.  Why?  Because in our humble opinion, Rock n’ Roll Racing is the best game on the compilation.  In fact, it’s our favourite SNES game of all time and still our go to game when playing that system.  The game is an isometric racing game but that’s only part of the story.  This was a revelation in 1993 thanks to it’s high-octane racing, good use of weapons, excellent tracks, tight handling and a banging soundtrack (MIDI versions of classic rock tracks).

The game sees you racing in a league against various alien foes and on the track you’ll be looking to outpace them, blast them off the track or lay spikes and mines to impede them.  It’s all a lot of fun and very exciting.  A smart upgrading mechanic keeps things interesting by letting you upgrade various aspects of your car too.

Playing the game in 2021 just goes to show how good this was back in the day.  It’s still very playable and the 16-bit presentation is fantastic but we’re happy with the treatment this compilation gives it too.  You get the original SNES version as well as the Megadrive port (which gives you more tracks) and that’s great but they also give you a ‘Definitive Edition’ which upgrades thing a bit.  It gives you a wide-screen aspect, letting you see more of the track, and some other graphical improvements (it still looks like the original but with some occasional new details).  The famous MIDI soundtrack now has an option for the actual songs (although we soon reverted back) and an expanded voice commentary.   The only minor niggle is that this version doesn’t support quick saving (every other game and version does) which means you’ll have to rely on the antiquated password system.

You also get a neat four-player split-screen version of the game too which lets you switch out local players for bots (handy in these COVIDy times).  So overall we’re thrilled with what they’ve done here and it makes this compilation entirely worth buying regardless of what else they’ve included. 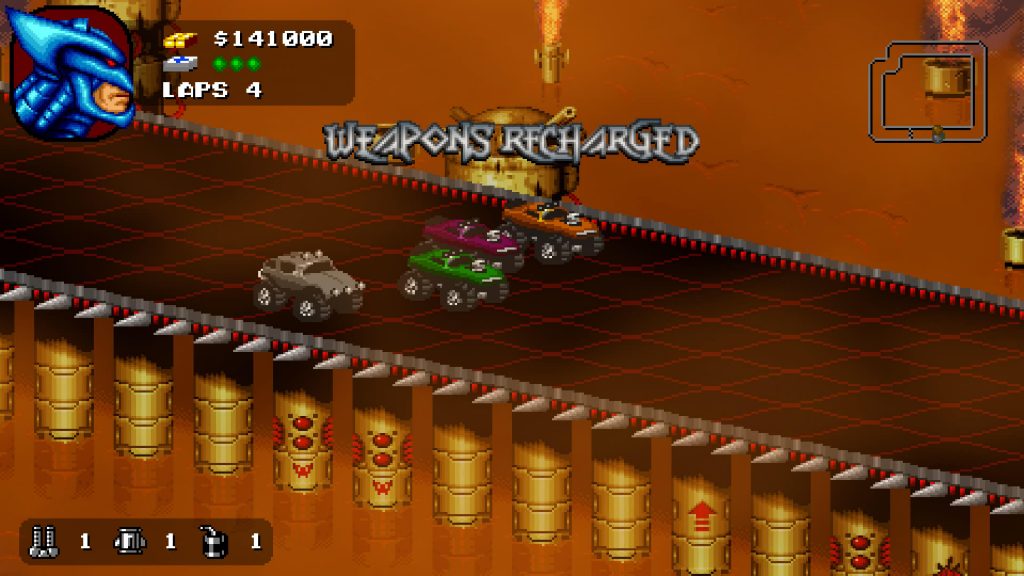 This 2D puzzle platformer was pretty popular back in the 16-bit era (we played it on the Commodore Amiga) and at the time it was a very original concept.  The game features three vikings who end up travelling through time and space and have to work together to escape from a series of stages in various settings.  Each viking has different abilities and you’ve have to coordinate their actions to get through each stage.

Erik is fast and can jump, he’s useful for getting to switches and accessing areas that no-one else can get to.  Baleog is the only viking that can kill enemies.  He has a bow and a sword, allowing him to handle himself at long range and with melee.  Last up is Olaf who has a shield that can be used to block damage, glide through the air and as a platform that Erik can jump on.

Solving each level is very satisfying, although it can get a bit complex towards the end of the game.  While the concept is the sort of the thing that you’d expect to see in an indie game on PSN, the execution is good and the cheery presentation is a lot of fun too.   The only downside to the game is how clunky the interface is when it comes to using items.

As with Rock n’ Roll Racing, The Lost Vikings still stands up today.  It’s clever, charming and very playable.  Here you get the SNES original, the Mega Drive version (which adds more levels) and the Definitive Version which has all the levels but with improved visuals. 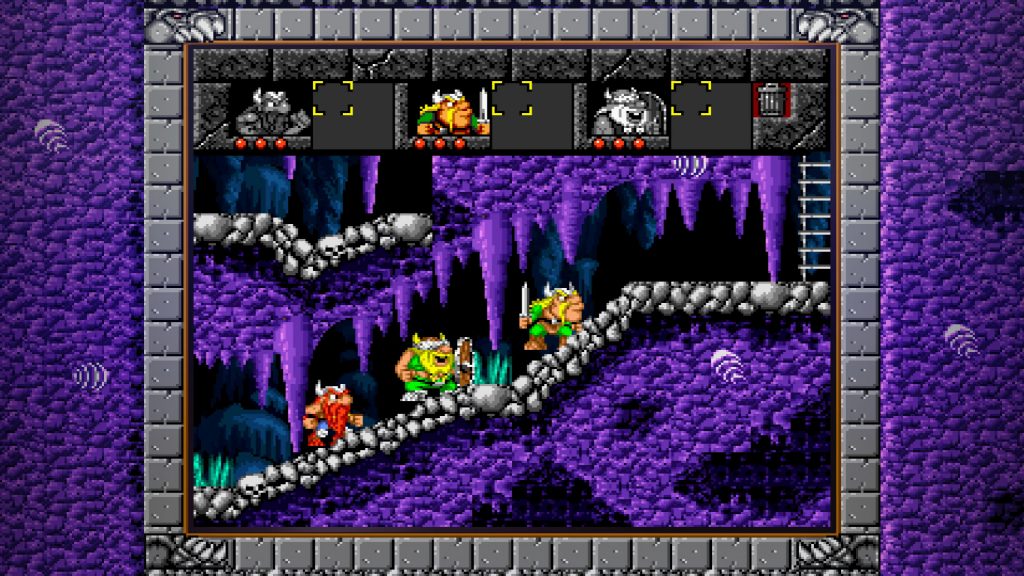 This was the only title on the compilation that we didn’t have prior experience of and so we were excited to play it (especially with it being made after the other two games).  Another 2D puzzle platformer, Blackthorne has you playing as a ’90s badass (he’s got long hair and sunglasses) who escapes military detention so that he can go back to his homeworld to avenge his father.  Or something.  The plot is nonsense.

Anyway, the game was clearly an attempt to jump on that whole rotoscoping fad from that era.  The slow, detailed animation that we saw in the likes of Another World and Flashback is what you get here, however the visuals are a bit clunkier than those games.  One thing is has in common with them though is its clumsy controls.  The whole time we played this, it was a struggle.  Blackthorne himself (or Kyle to his friends) can leap about but only if he has holstered his gun which means you are constantly having to holster and unholster your weapon.  It might not seem like a big deal but, urgh, it is.

The focus on clever rotoscoped animation means that you’re often committed to slow moves until all of their frames of animation are complete which takes all of the flow away from the game.  And then you’ve got the levels themselves which are hard to navigate and quite complex.  Thankfully the Definitive Edition here adds a map that helps a little but we didn’t enjoy this game at all. 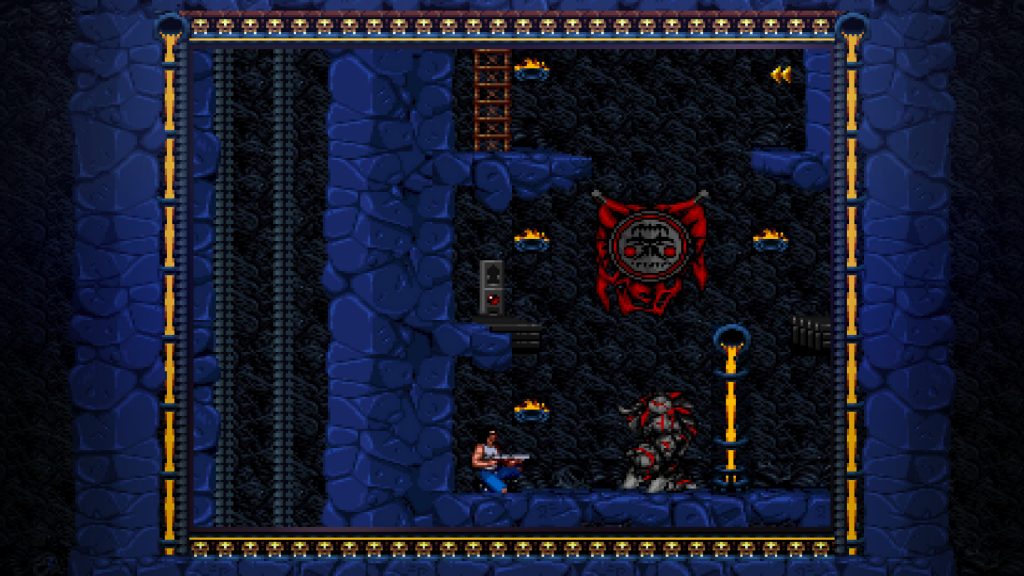 Aside from the games themselves, this compilation also adds some very welcome extra content.  You get some concept art and a music player (no Rock n’ Roll Racing tunes on that though) but the main draw is the selection of interview videos where the developers recall the production of the games.  We really enjoyed them and were pleased to see Blizzard include them as it really elevates this compilation into something of a museum piece.  Between that and the upgraded versions of the games, you can feel the love that has gone into this collection.

Of course, it helps that one of our all-time favourite games gets to benefit from that treatment and so we’re really just seeing this as the ultimate version of Rock n’ Roll Racing with a couple of additional titles to round out the package.  But that’s more than enough for us.  If you’ve got a similar fondness for that game or the others, then this is an unmissable collection.  However, if you’ve never played these games before then we’d suggest trying them out via emulation first or else you might just find it all a bit too dated to be experiencing them for the first time.

If you’re really being picky, the omission of RPM Racing and Lost Vikings 2 is something you could pick on (and we’re wondering why they haven’t fixed the issue about trophies not syncing yet) but we couldn’t care less about that.   More annoying is that the Definitive versions of the game all make some good improvements but they don’t support the quicksave feature or the rewinding which is really weird.  So if you want the those quality of life features you’ll be missing out on the improved presentation.

But, look, It’s 2021 and they’ve just released an improved, but faithful, version of Rock n’ Roll Racing and we couldn’t be happier.

Blizzard Arcade Collection
8 Overall
Pros
+ Rock n' Roll Racing but improved
+ The games are all treated with respect
+ Great extra content
+ Additional versions of the game are a nice inclusion
Cons
- Definitive Versions lack quicksave/rewind
- Blackthorne is a struggle to play
- No online play
- Post-release technical fixes have been slow to arrive
Summary
An improved version of Rock n' Roll Racing would have been more than enough so adding two more games, and a lot of extra content, means that we are very happy with this compilation. We're just not sure why the modernised versions of the game lack some of the quality of life features that the original ports have been given.