Kill It With Fire from developer Casey Donnellan Games and publisher TinyBuild is a port of the PC game released on Steam last August. And it’s really rather good.

This reviewer lives in a house with three others, one is my small child who thinks spiders are cute. Then there’s my wife who isn’t that fond of spiders, but she will call me to put one outside if she spots one. Then there’s the stepson who screams like a little girl when he sees even the smallest money spider. Kill It With Fire is a fair depiction of the overreaction I’d expect from him. 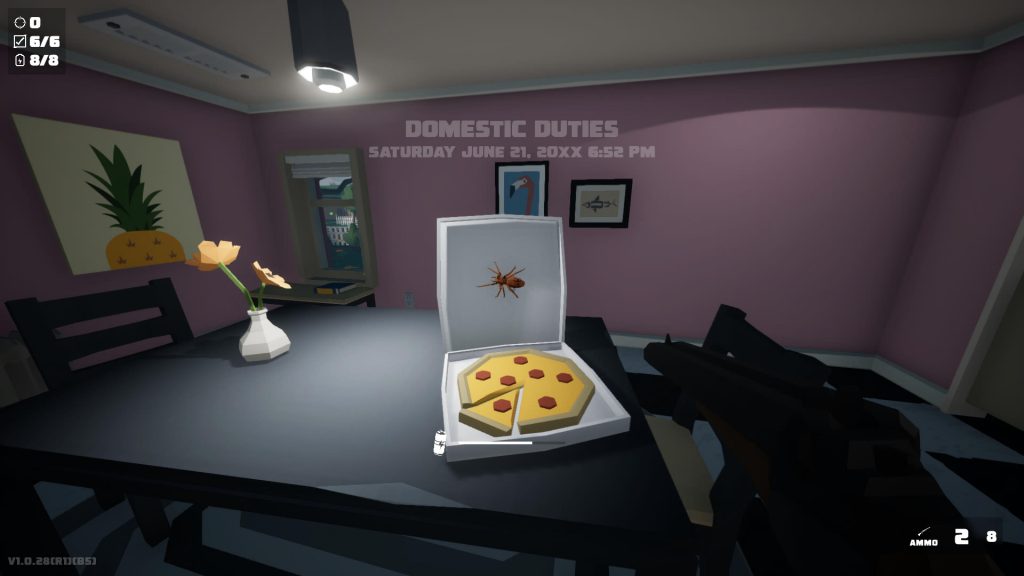 You see, it starts off normally enough dispatching spiders with a clipboard or a book. Both items that come to hand fairly easily in a household. But before you know it, matters escalate to an aerosol and lighter to dispatch spiders and your bathroom is on fire. Not for nothing does Kill It With Fire open with a disclaimer ‘don’t try this at home’. People are fucking stupid at the best of times.

Structurally each level has you starting out broadly the same way. With a blank clipboard, it’s generally down to you to find out what the five or six distinct objectives are in each of the eight main levels. The arsenal that eventually becomes available to you as the perceived threat increases, reaches frankly preposterous levels, but it’s great fun with it. 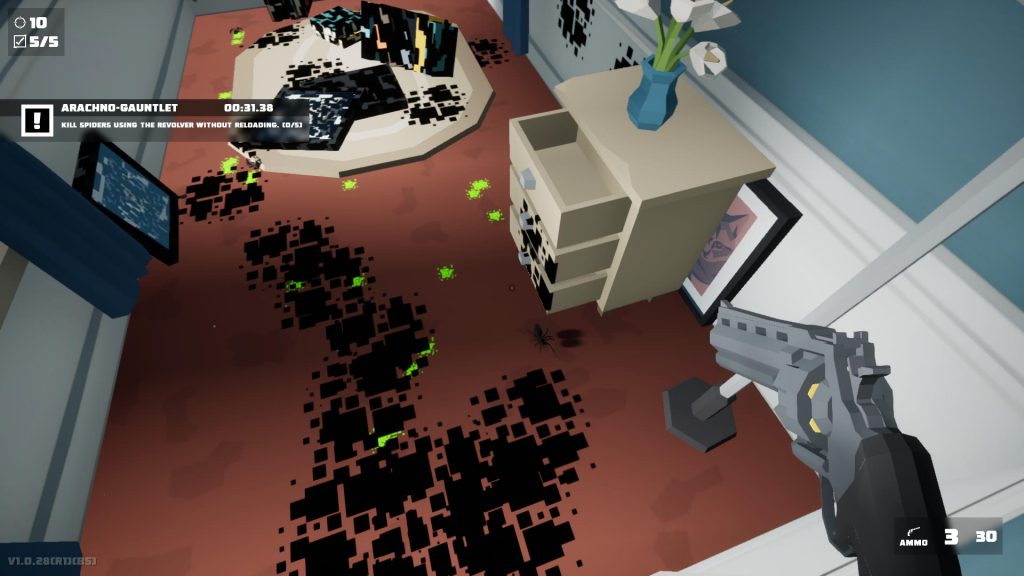 Once you’ve met all the objectives in a respective level, you’ll be able to attempt the Arachno-Gauntlet, a timed challenge with a specific restriction on the weapon. For example, in the first level, killing five spiders with your revolver without reloading. Given it’s a standard six shooter, you get one opportunity to miss. The gauntlets across the other seven levels are generally variations on that theme, though some of the time limits are ridiculous.

Luckily as you progress through the game, you unlock new weapons, gadgets and scanner upgrades. Some are more useful than others. For example, we barely used the shuriken beyond one gauntlet where we literally had to. Similarly, the scanner upgrade for finding secret items is next to useless. 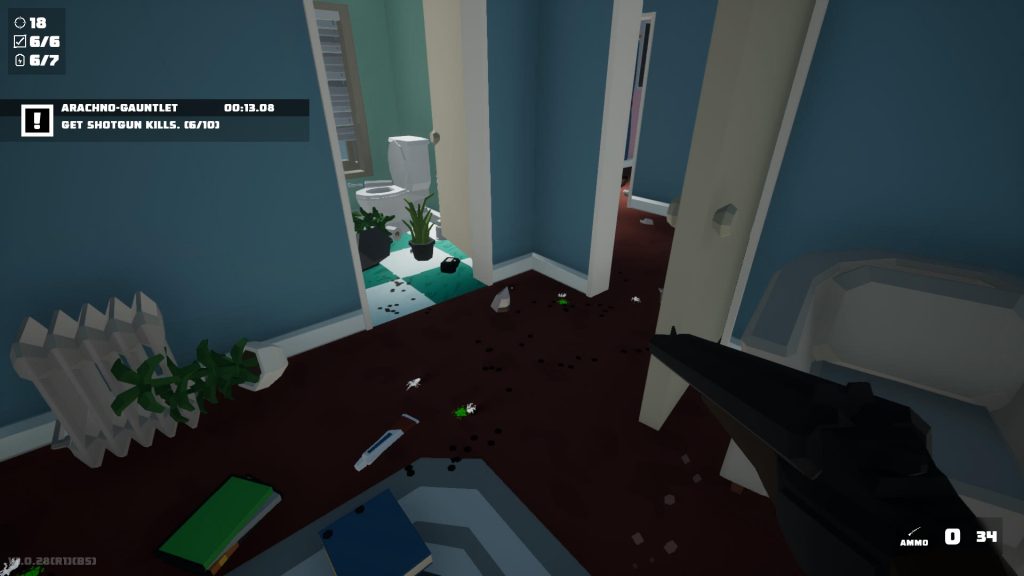 After you’ve unlocked a weapon in one level, you can use it in any of the levels you’ve already unlocked. Admittedly this makes some of the objectives a little on the trivial side, but at the same time, one particular consumable comes in very useful. One level takes place in an ornamental Zen garden, but the gauntlet is next to impossible if you don’t use the energy drink. This has the effect of slowing down time for you and makes the otherwise insurmountable task of doing away with ten spiders with shurikens that bit more doable.

Ultimately, Kill It With Fire has a distinct puzzle flavour to it. Successive areas within a level won’t unlock until you’ve got a sufficient kill count to satisfy the requirements. After you’ve beaten a level though, you can come back and overpower it with what amounts to absurd overkill. 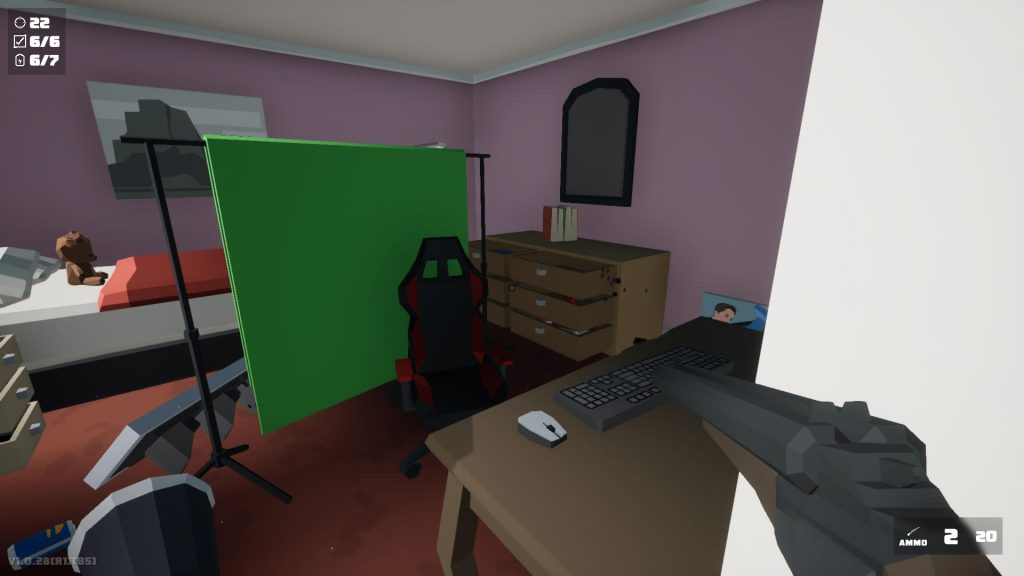 The levels are all familiar looking locations with pleasingly destructible scenery into the bargain on occasion. We kept going back to the office level in particular as it was remarkably cathartic to take a flamethrower to a conference room for example.

Your foes are tiny spiders, the biggest no bigger than a mobile phone, using a wide variety of incendiaries, firearms and blunt objects to dispatch them can’t come over as anything more than a little bit silly. Even the explosive variety are just for show, they don’t represent any threat.

The music is well done with pizzicato style strings in the style of a Hitchcock film scored by Bernard Herrman, similarly sound effects are fun, though we’re not sure spiders scream when they’re killed. 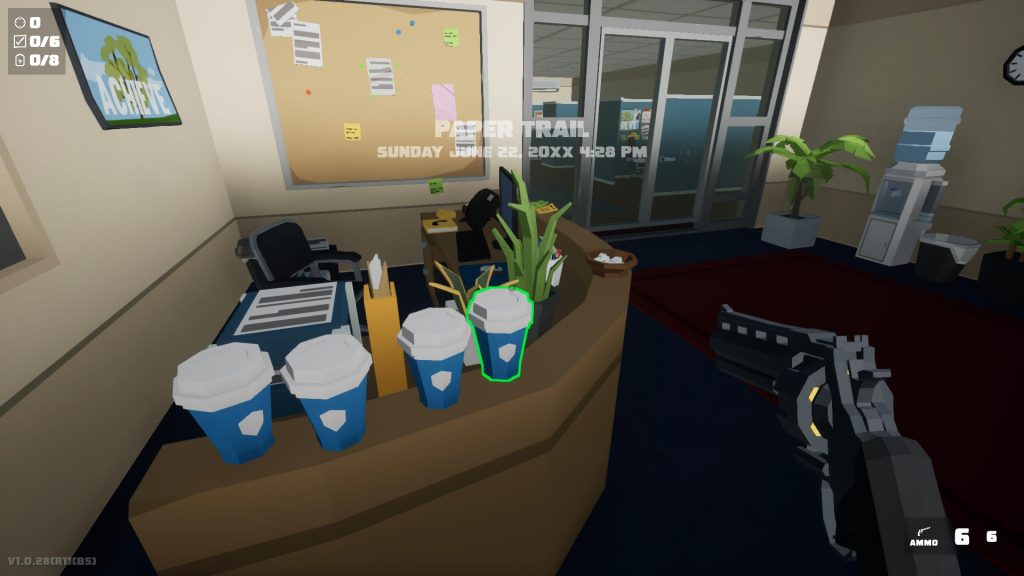 Then almost as soon as you’ve hit your stride, you’ll reach what appears to be a rather climactic ending and the credits will roll. There’s a short epilogue afterwards, though all this really serves to do is to make sure you mop up all the gauntlets, as you can’t get the ‘true’ ending without it.

In conclusion then, Kill It With Fire is a fun puzzler of sorts with an amusing arsenal of creative ways to see off your tiny arachnid foes. It’s a little bit brief with only eight levels plus the epilogue, but you’ll have a whole lot of fun experimenting to meet the occasionally oblique objectives.

Cons
- Maybe a bit short with just eight full fat levels plus an epilogue
- Some tracker upgrades are pretty useless – the one for secrets in particular
- You can straight bruteforce some objectives
- Occasional weapons are a bit crap and you won’t bother with them unless you have to
Summary
Kill It With Fire is a very silly, very fun depiction of an escalating arms race against a bunch of tiny spiders. It’s a bit short, yes, but you’ll have a ton of fun playing it.