It’s all right there in the title but Session: Skate Sim is, unsurprisingly, a skateboarding simulation.  However, that doesn’t mean that Montreal-based Crea-ture Studios haven’t surprised the hell out of us with this game.

Like every other right-minded gamer, we grew up on the Tony Hawk games and while they taught us a lot about skating culture – the music, the clothes, the vocabulary and the skaters themselves – it taught us as much about skateboarding as Super Mario Bros. taught us about plumbing.  However, it was so influential that near every other extreme sport game after used its control scheme.  Tony Hawk was king.  Until it wasn’t.  After Tony Hawk Pro Skater 3, the series took a slow but consistent downturn which left the market open for a new contender. 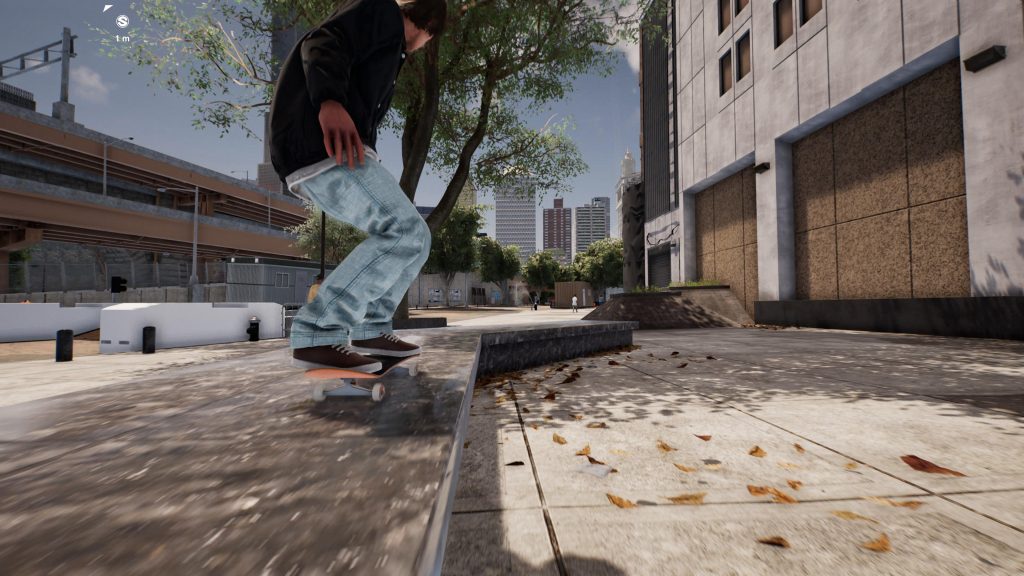 In stepped EA, of all companies, with the sensational SKATE.  Instead of the endless combos and high flying escapades of the Tony Hawk games, this was more considered and realistic.  That series had three entries (somewhat declining in originality and impact as they went along, but always great nonetheless) and then that was it.  The skateboarding genre was pretty much dead for a while (or, worse, as we still had Activision putting out shitty Tony Hawk games).

But now things are looking good.  The first two Tony Hawk Pro Skater games got bundled together into a tasty remaster and SKATE is coming back (albeit as a free-to-play title which is a shame) but Session is the most interesting kid on the block.  You see, Session is to SKATE what SKATE was to Tony Hawk Pro Skater.  It ups the realism to an almost aggressive level. 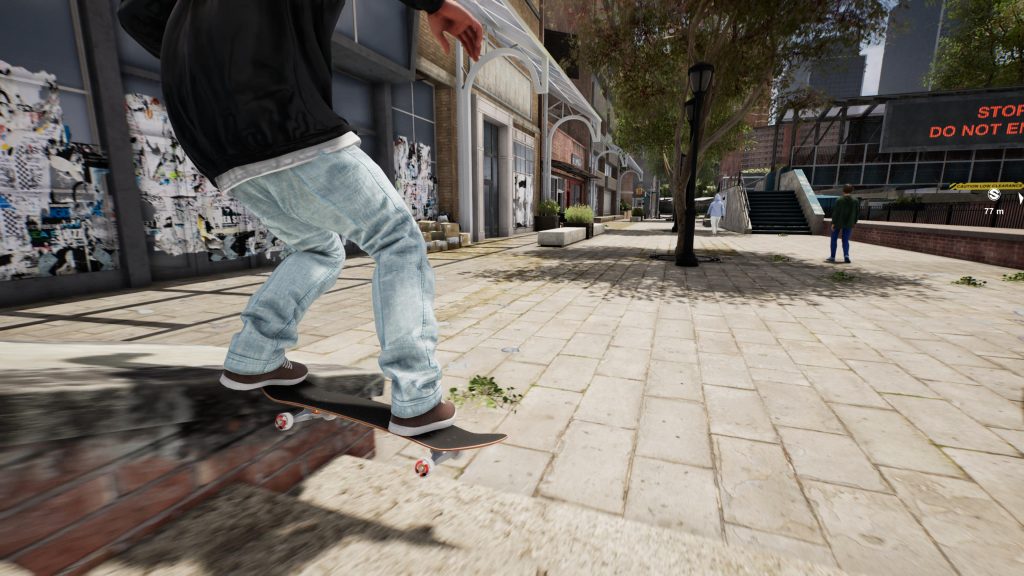 Starting the game, you’ll get a little bit of a tutorial which introduces you to the control system, but that will not be enough.  You’ll be referencing YouTube videos, forums, social media and anywhere else that can help you get to grips with it.  You see, in Session each stick controls your skater’s feet and you’ll have to make fairly accurate moves in order to pull off those tricks that you’d take for granted in other skating games.

In fact, everything will feel alien to you.  With the left stick controlling your left foot, you’ll be controlling your steering with the DualSense’s triggers.  That’s weird.  That’s very weird.  X is used to push forward and Y gets you off your board so that you can walk around.  For the first hour or so you’ll do that a lot because skating to places seems just remarkably difficult. 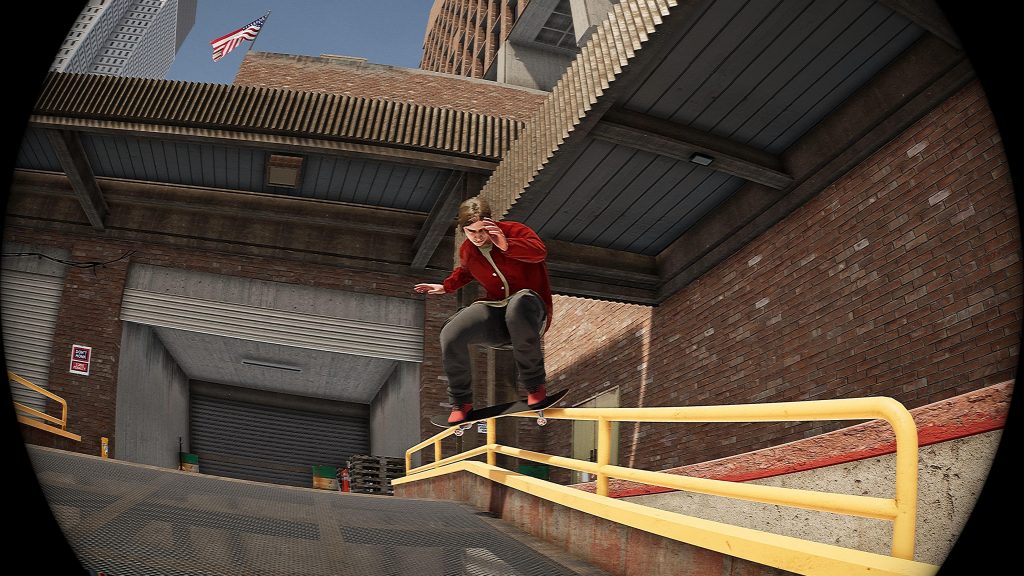 This is very much a street skating simulation with no vert action.  But you Rodney Mullen fans shouldn’t get too excited because you won’t be doing all his handstand flip tricks either.  Nope, this game really does stick to the fundamentals with kickflips, manuals, grinds, shuv-its, laser flips and so on making up your moves arsenal.  So going from your THPS combos where you can combine a 900 with reverts, 25 different flips (all linked by various grinds) to a game where you feel like one of those kids in the park falling on their face trying to do a kickflip does seriously limit your early enjoyment of the game.

That said, practice does make perfect and you’ll eventually get better.  Suddenly skating to your next objective will make more sense than walking there and you’ll start seeing opportunities to work on your skills.  Every low wall, bench or planter is suddenly a chance to try out a grind (which are just as low percentage as any other trick in this game) and each stair set is a chance to capture some cool footage.  It’s kind of like real life (for people with co-ordination and a decently low centre of gravity and not me.  Or you). 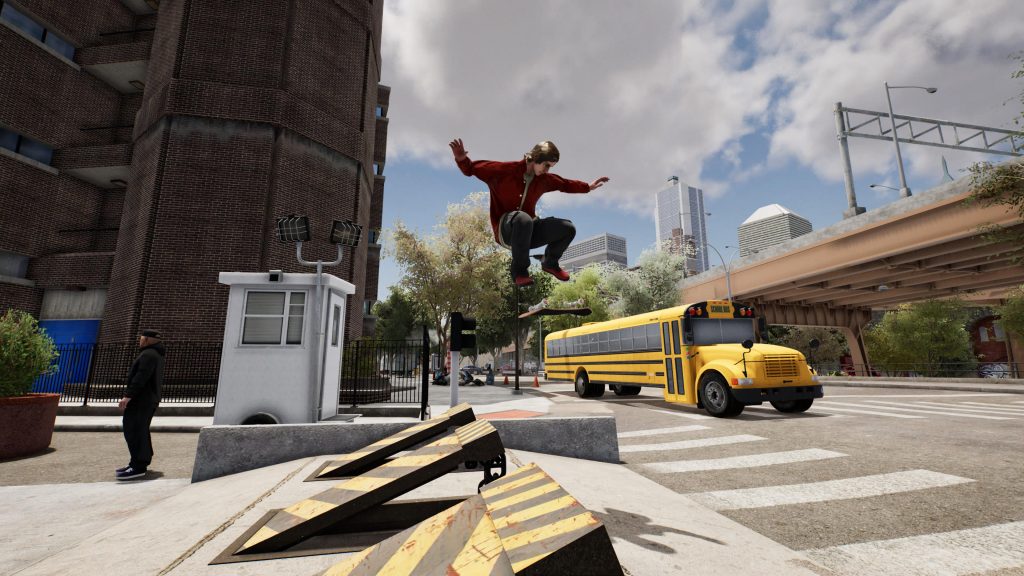 Being a simulation, there are a large set of configurable options to use.  These control everything from the tightness of your trucks, how your wheels bite against the deck, how high you pop the deck, the way your weight controls steering and pretty much everything else that a real skater has to think about.  This isn’t a game that you can be really good at right away, you need to earn that shit.   I mean just look at this video.  It’s an exhaustive list of options.

So in terms of Session‘s simulation chops, the game is fantastic.  Where things aren’t as good are with the rest of the package.  The overall meta-game here and setting is just a bit off.  There are a few examples of this, all of which we do consider negatives. 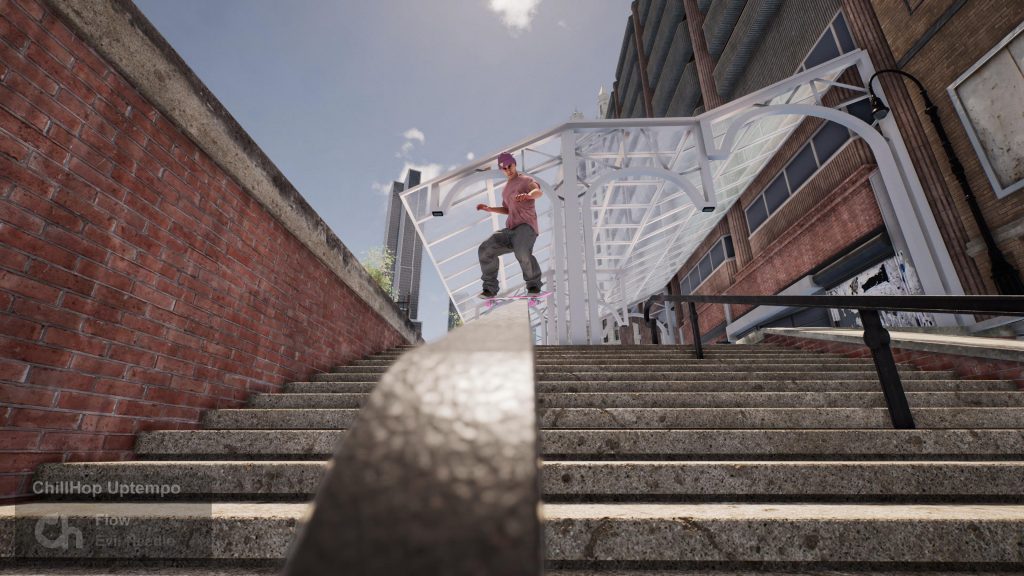 Instead of the THPS system of having level objectives, here you get all of your ‘missions’ from skaters around the game’s large open-world.   They’ll send you to an area and will ask you to do a short list of challenges there, usually involving landing a number of tricks.  This is fine but once they’ve told you what to do, that information is gone.  You can’t bring it back up.  You’ll have a general instruction but any other info they’ve given you is gone.  It’s beyond frustrating.

Also, they’ll ask you to do a particular trick but rather than the game show you the inputs, the skater will tell you what to do but as if they were explaining in real life.  They’ll say things like ‘do a pop shuv-it but push your front foot out as if you were doing a kick flip’ and that’s all fine except that nothing you’ve ever learned from skateboarding games applies anymore.  Don’t tell me what to do verbally, just show me.   So that means you’ll be going through the game’s eight different trick lists (there are versions for switch, nollie and so on) which takes you right out of the game. 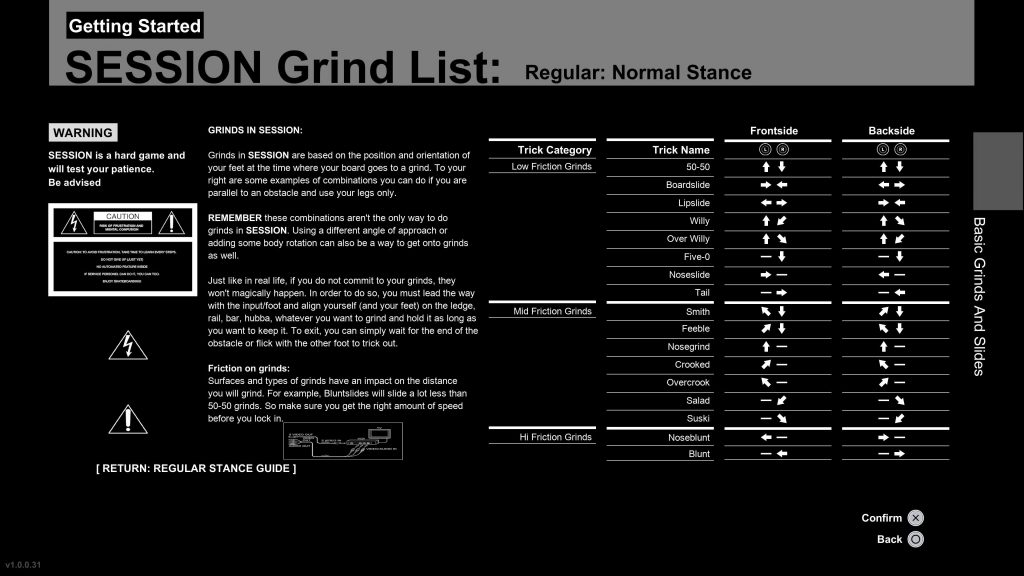 Of course, like any good skateboarding game, you’ll land the wrong trick a lot.  Especially here where quarter turns and little swerves mean the difference between similar tricks.  The thing is, Session shows you nothing.  It won’t tell you what you’ve landed.  There’s no information at all, so you’ve got no real feedback.  That’s fine in terms of realism but not great when you’ve just attempted the same trick twenty times and have no idea why it’s not letting you progress.

With no scores on show (or indeed any scores at all), no confirmation of your moves and no other virtual information, this really is just like skating around in the real world.  Except that in the real world, cities are busy and have life.  The environments in Session (based on New York, LA and San Francisco) are oddly empty.  There’s an option to increase the number of pedestrians but they just walk around like lemmings getting in your way but there are no cars on the roads or signs of life anywhere.  It’s weird.

However, it all plays into Session‘s almost admirable vision.  The only thing that matters here is the skating and it’s so difficult that anything else is just an unwanted distraction.  Indeed, apart from skating around doing challenges, the only other thing you can do is buy clothing or customise your deck.  Oddly there are barely any options to customise your skater (for example you can either have a shaved head or be a hippy) but you can buy dozens of different t-shirts. 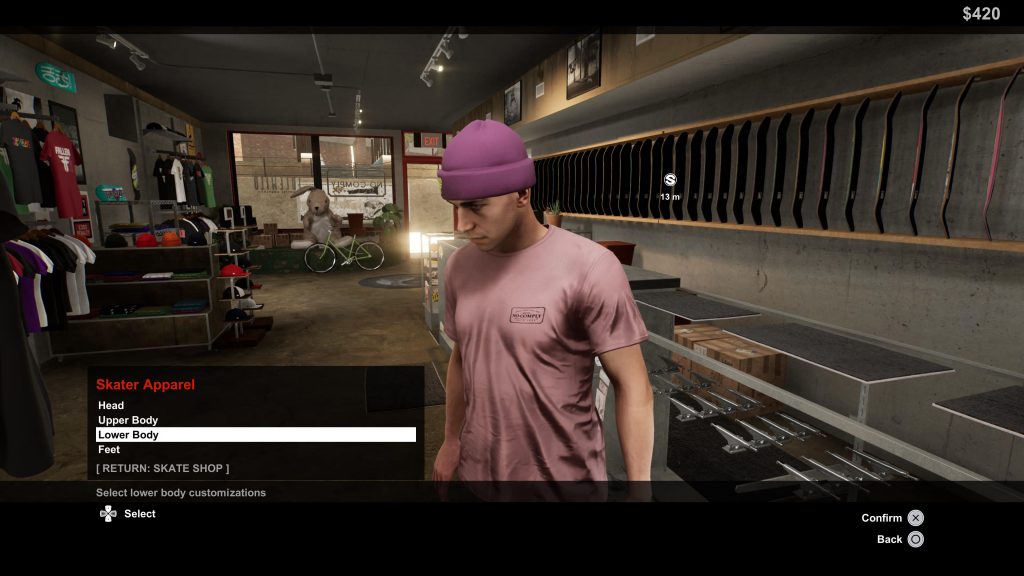 Well, that’s not all strictly true.  You can also buy and then place objects down that you can skate on.  Little ramps and rails, that sort of thing.  But that was always something we forgot to do because there was never any reason to do it.  And besides, we’d keep seeing planters or rails and would get caught up for ten minutes at a time trying to make some sort of cool trick happen.

Session‘s presentation is a mixed bag.  The cities themselves do look okay and the skating animations are adequate but there’s no real eye candy here.  You can tell that Crea-ture are a small team but given how long the game has been in development, we’d have liked things to look nicer.  Thankfully the music is better though with a good mix of musical styles on offer but without the pop-punk and ska stuff from other games in the genre.

This is a hard game to summarise (in so far as this is where we’re meant to leave you with an idea of whether or not you should buy the game).  It’s obvious to say ‘don’t expect this to be anything like the Tony Hawk games’ but it’s worth noting that it’s a million miles away from SKATE also.  This is much drier and the realism could easily put you off.  In fact, it probably will.  Your first hour of this could very easily be your last with it.  But if you stick with it, the sense of achievement you’ll get from landing tricks and surviving grinds is genuinely remarkable.  There are annoyances and plenty of them but if you’re prepared to put in the time to get good, Session gets good along with you.

Session: Skate Sim
7 Overall
Pros
+ Refreshingly different
+ Good realism
+ Progression is earned and rewarding
Cons
- The structure of the game and missions is a bit empty and ordinary
- Game world doesn't feel alive
- Doesn't give you the information you need very easily
Summary
Session's ultra-realistic skating mechanics are spot-on and reward your practice and patience. However, it's set in a world that feels a little dead, empty and cold at times and the structure the game does give you isn't particularly interesting or user-friendly.